Not what you would expect of this semi-detached house in the residential streets of Dulwich. But for artist Stephen Wright, this is home.

Stephen moved to London in the 1980s after finishing his master’s degree at Manchester University in Fine Art Textiles. He found 45 Melbourne Grove, the property now known as ‘The House of Dreams’, and moved in.

One night, Stephen sat with his late partner (Donald) by the fireplace and over a glass of wine, they discussed creating an art project, something that meant something to the both of them: “It was about sort of going on a journey, a dream journey really, which is what I have been doing ever since.”

Donald had been diagnosed with Evans Syndrome (an autoimmune disease) and his condition was deteriorating. Anything could set him off and Stephen was left to watch the illness take over and change the Donald that he was familiar with. “I took care of Donald while he was ill, as that is what a partner does.” 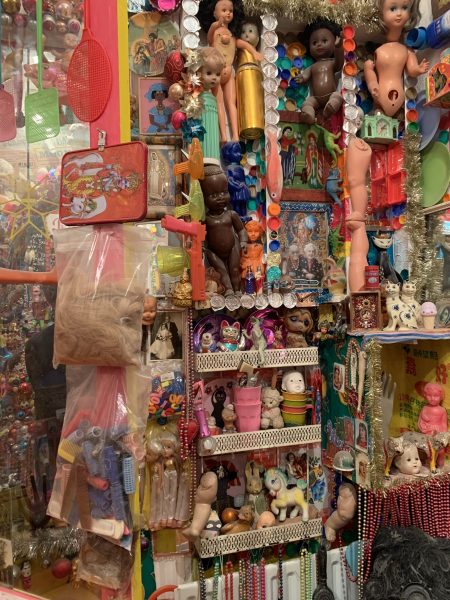 The House of Dreams [Liza Neziri]

Stephen got a call urging him to come to the hospital by one of the nurses. He was told that Donald did not have much time left, the disease was going to consume his soulmate. And later on that day, while Stephen was still holding his hand, Donald passed away.

Only a few months after, before he was able to fully recover from losing Donald, Stephen’s parents also passed away. The house became a way for him to hold on to all the memories of those he had lost; a place where he could heal.

In a short amount of time, Stephen had lost the people who were close to him and he decided to cope with it in a completely unorthodox way, for us British that is. Yet such an unusual way to make use of a house has proven to be surprisingly popular and interesting, clocking up around 2,000 visitors in 2019 alone.

His mission to turn his house into an “environment of dreams” turned into a safe space for him to grieve but also a place for people to step away from normality and bask in the strangely beautiful absurdity.

‘The House of Dreams’ is the culmination of Stephen’s brightly coloured, disowned objects that he has collected from all around the world as he helps himself through a time of loss. Whilst such an idea may sound like the brainchild of a hoarder looking for a way to support their habits, Stephen’s artistic and spiritual endeavour couldn’t be further away from that.

As he welcomes me at the sea-blue, wooden door into the front garden, I am immediately confronted by an array of colours and patterns, light bouncing off fragments of glass making up beautiful ‘crazy paving’ mosaics; a fairytale heaven that I would’ve adored as a child, with a variety of dolls greeting me at every point.

Stepping through the front door, I enter the hallway. No different in size to any other two-storey London home, the walls are decorated with various black and white hand-painted pieces of writing from important times in his life.

Appearing chaotic and scrawled at first, the detail, meaning and order quickly became clear and prepared me for my imminent immersion into Stephen’s weird and wonderful house. 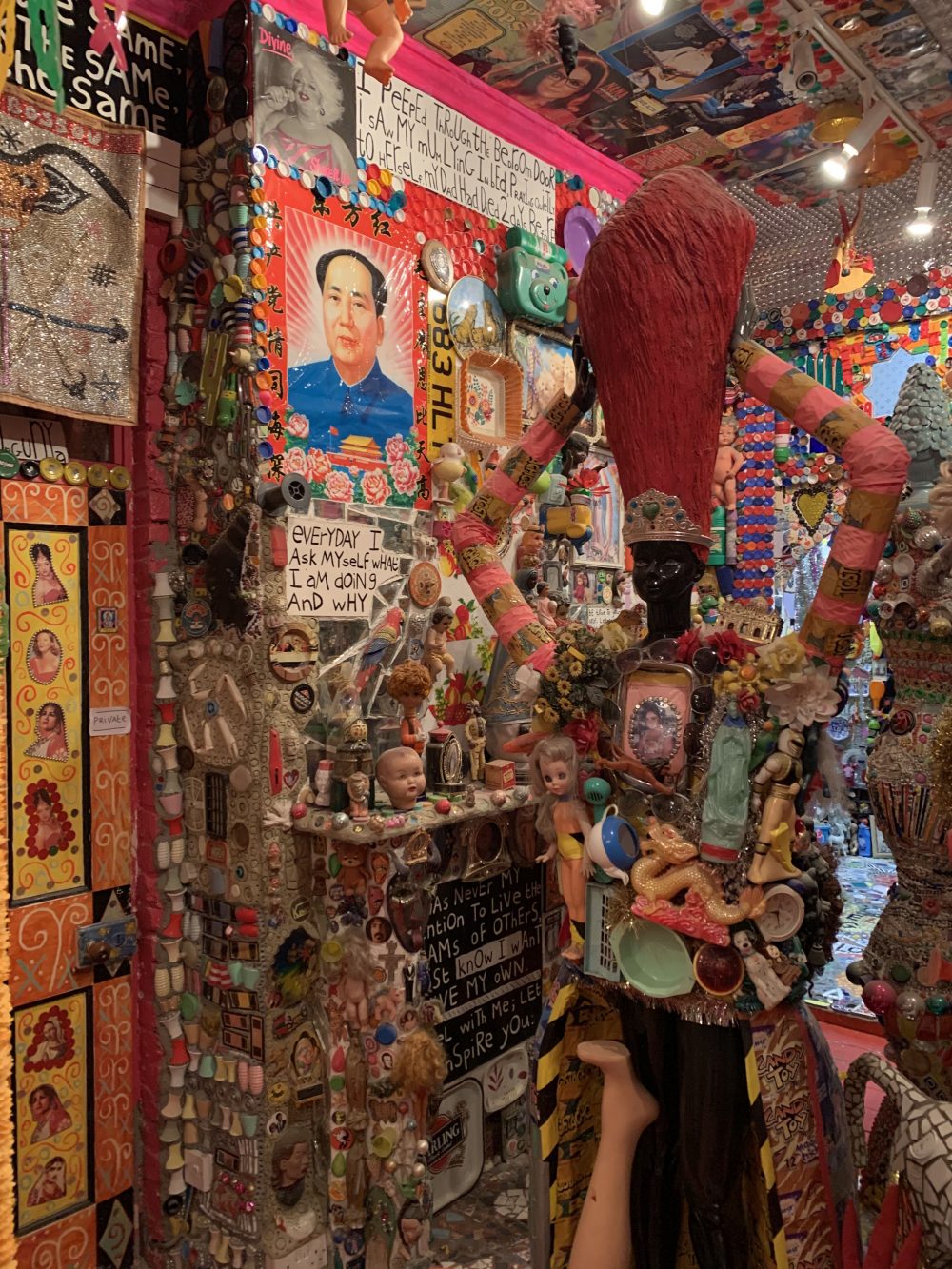 The front room in House of Dreams [Liza Neziri]

After offering me a cup of tea, Stephen directs me into the front room. Every inch of wall, floor and ceiling space is occupied by a seemingly infinite array of pink, yellow, red and orange; from magnets to dolls, old bottles to plastic spoons, Stephen has filled the entire room with bizarre objects that all have a story – they all have DNA.

“People come here for many different reasons,” he tells me, as he sips from a steaming mug in the bright skylit studio, enjoying the last moments of warm light before the sun sinks. “It’s extraordinary, people with illnesses want to be cured or something but I am not a doctor.”

“Guests have donated hair and teeth, I like it, I encourage it,” he explains. “I like it because it’s human, it’s DNA which is what I’m interested in. All the materials that come in out of junk markets are never washed so they still have stains or smells and all their memories on them. So, therefore, if someone offers me teeth or something from a loved one, I find it very moving.”

Weaving through the maze of his ground-floor museum, I become fascinated by the detail and artistry that has gone into this project. A vast selection of small souvenirs and trinkets from India line a shelf next to one of Stephen’s ‘comfort dolls’, strange concoctions of various materials made into four-foot figures, each with their own story and relevance. 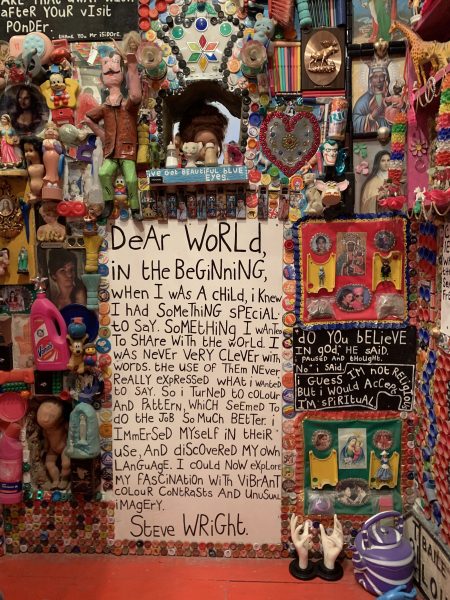 “The comfort dolls are used when I need a hug,” he says, letting off a soft laugh. It is almost an idea straight out of a Frankenstein novel to recreate your loved one using the items they have left behind. Yet in all its chaos, there is order. In all its madness, there is something familiar and deeply sentimental, particularly for those who have lost a loved one.

After the death of his mum, Stephen collected many of her items including her beads and wedding dress and used these as materials in creating a sculpture called The White Bride: “It’s really a conglomeration of memories and events that happened at the same time.”

The rough skin seen on the curious figure also holds an unforgettable memory of his partner in hospital: “When Donald was in hospital, when he was ill, he had a serious skin condition and I used to put chamomile lotion all over his face. It is really the calling of all I did. I mean, his skin did actually look like this in hospital.”

The sculpture is also seen holding a knife with blood dripping down, which Stephen explains was put there to act as a reminder of how he was feeling when he was left alone.

Having had the house itself for 40 years now, Stephen’s life is deeply engrained and attached to it, it’s almost an extension of himself. His walls harbour images of all the things he loves and wants to immortalise.

“A lot of the writing in here is taken from my diaries and a lot of it is about healing. This was written half an hour after Donald died in the hospital,” he says as he points at the black wall with thick, white writing going across the entire hallway. “I wrote it in my notebook, then I came back. This really describes the death of a partner and what you do, you love them, you wash them, you do what you need to do.”

“People point out that it is lower case, or it is what it is, but this is just how I write,” he says, pointing to the assortment of upper and lower case letters sprawling across the wall beside him. 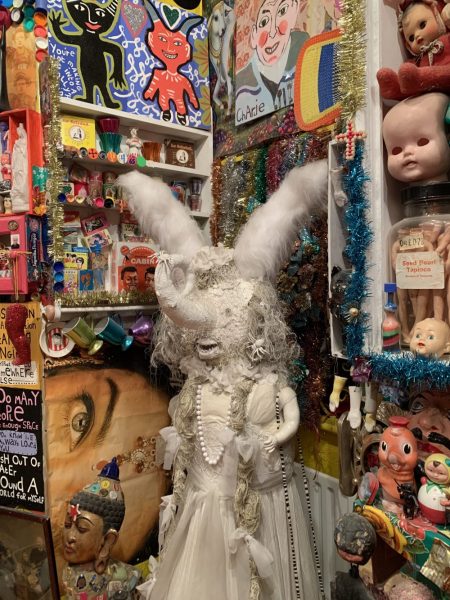 The many dolls that hang in the room might appear creepy to many, however, delving into Stephen’s bizarre house brings a feeling of community and a strong sense of nostalgia for my childhood spent nursing dolls that I thought were hurt or broken.

“I bought the doll with a caved-in head from Deptford market for a pound. It had been run over and the guy couldn’t believe it,” he laughs.

“After all those bereavements, I wanted to start a family and I wasn’t in a relationship for a while. I was a carer for Donald when he was ill, and I became a carer for these dolls.”

The pain of loss is universal, yet Stephen’s art is not something that everyone may understand. “I’m doing this for me and so I couldn’t care less what anyone thinks,” he says.

It is clear that Stephen’s 15-year project has grown into the vibrant carnival of man-made objects which he has bestowed within his home in this ordinary, quiet Dulwich neighbourhood, purely through his love of working with materials and rehoming lost and discarded objects.

For Stephen, not only has this been a form of self-expression and a way of coping with the tragedies of life, but also as a way of leaving his mark in the world.

Without any brothers or sisters, Stephen was delighted when the house was bequeathed to The National Trust, ensuring that the ‘The House of Dreams’ will live on in all its glory. But for now, Stephen is happy and enjoying life in 45 Melbourne Grove.

By Rella Jefferies
4 Mins read
Frida Kahlo, the most celebrated Mexican artist, has been heavily misrepresented and appropriated following her death.
Fashion