“Plastic pollution has become one of the most pressing environmental issues, as rapidly increasing production of disposable plastic products overwhelms the world’s ability to deal with them” – Laura Parker, National Geographic.

Since the late 19th century, we have become increasingly dependent on plastic as both an affordable and durable material. As such, it is a vital material for industries all over the world. But why is this such an issue?

The chemical structure of plastic means that it is incredibly slow to degrade, with most plastics taking 400 years or more to fully decompose. Approximately eight million tonnes of plastic ends up in our oceans every year and some researchers predict that this figure could double by 2025. To put that into perspective, that is more than 600,000 double-decker buses full of plastic waste.

According to Plastic Oceans UK, plastics make up to around 75% of marine litter, although this can be up to 100% in some areas. The litter includes everything from filters to cigarette butts, bottles and bottle caps to food wrappers, grocery bags to polystyrene containers.

Marine animals often get caught in these plastic objects, ingest the plastic or become exposed to the chemicals which can alter their physiology over time. In addition, WWF reported that 90% of seabirds have plastic in their stomachs, more than 270 species have been harmed by entanglement in discarded fishing gear and other plastic, and 240 species have been recorded living with ingested plastic.

A similar study conducted by the University of Queensland in Australia, based on data collected since the late 1980s, found that Green sea turtles now ingest twice the amount of plastic they did 25 years ago.

The United Nations reported that the ingestion of plastic kills an estimated one million marine birds and 100,000 marine animals each year. And research from Plymouth University has found that close to 700 species of marine life are facing extinction due to the increase in plastic pollution. 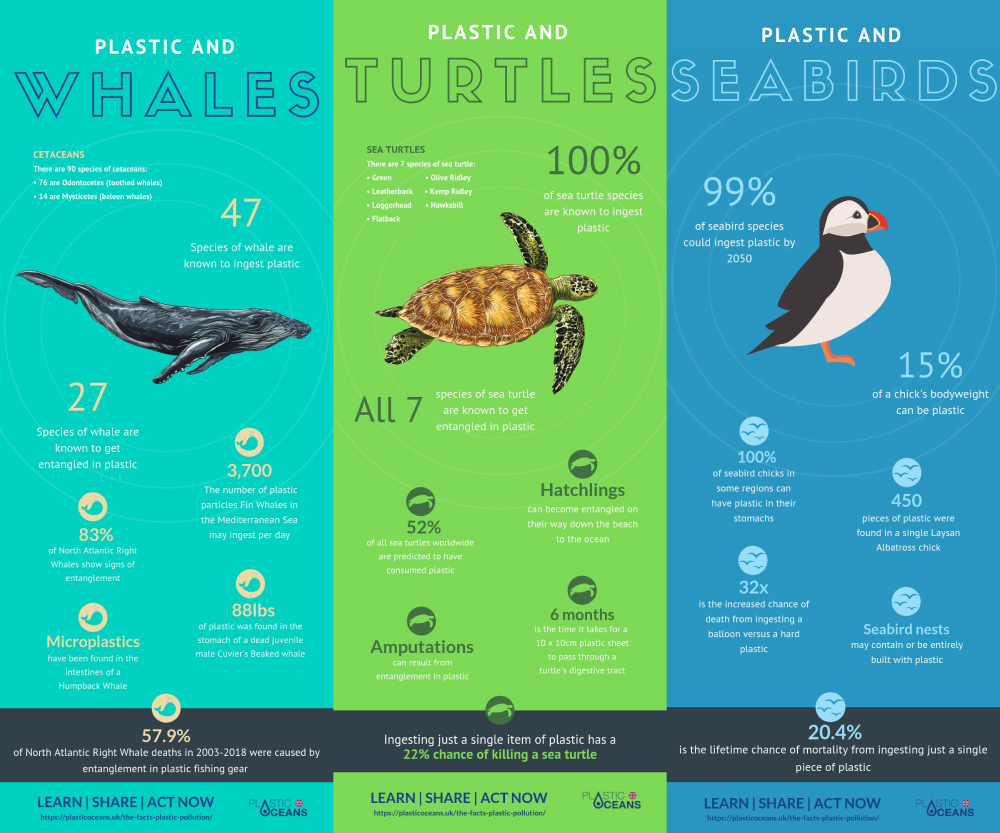 Marcus Gover, CEO of WRAP UK, one of the UK’s leading charities working with governments, businesses and communities to deliver practical solutions to improve resource efficiency, said: “The complexities of fixing a broken system of make, use, dispose into one of circularity will take time, investment and a greater understanding across the value chain, from packaging producers through to citizens. Tackling plastic waste requires concerted global and national level action.”

Plastic pollution is undoubtedly a massive problem and it is sometimes unclear who or what is being done about it.

Enter Ocean Revival 2020. This four-man team of serving and former Royal Marine Commandos are set to face their biggest challenge yet as they row across the North Atlantic Ocean from New York to London – a total of 3,700 miles.

“It’s an amazing challenge. Crossing the North Atlantic in a 27ft boat… It’s going to be different. I think it is something that grabs people’s attention and actually forces the issue of plastic in our oceans onto people’s sort of dinner plates if you like,” Matt said.

The main aim is to highlight the issues of plastic in our oceans and the dramatic effect it is having on our marine life and ecosystems, in support of the organisation Plastic Oceans. They are also hoping to raise awareness for The Royal Marines Charity who offers support to injured Royal Marine Commandos.

Plastic Oceans UK have been experts on plastic pollution for a decade. Their award-winning documentary A Plastic Ocean has been named by Sir David Attenborough as “one of the most important films of our time” and has ignited mass consumer awareness. They have a mission to “solve the [plastic] crisis and change attitudes” and have a number of programmes to engage multiple audiences including individuals, schools and businesses on the appropriate use and value of plastics.

“It’s a very real problem right now and it’s something that we humans, we as a society, it’s a choice that we make; it’s that convenience culture. We don’t need to [use plastic]. It’s [about] having a go ourselves and just trying to make that small difference,” Matt said when explaining why they’ve chosen tackling plastic pollution as their mission.

They had planned to set off on May 15, 2020, however, due to the impact of Coronavirus, the team are now focusing on training ready to complete the challenge in 2021. Rowing from the Brooklyn Bridge in New York to Tower Bridge in London, the men are set to burn over 600,000 calories and lose up to 14kg each.

Whilst the crossing has previously been attempted a total of 72 times, only 29 have been successful and the journey has sadly taken six lives. This huge feat will see the team battling against the unpredictability of the weather systems, the temperature of the water and various other difficulties that come with having four burly men on a boat that has less square footage than the average car.

“The biggest challenge will be living so close together for such a long time. When we’re tired, hungry, wet, cold or missing home, those little frustrations will start to build,” Joel explained. “Trying to be as open and honest as possible is really important, so if something frustrates you, you address it straight away. That will help to ease all tensions and should help everything on the boat flow much more smoothly.”

However, despite the many tribulations of rowing on the open sea, the men are surprisingly confident: “Obviously you have some days where the worry gets to you and you’re more anxious than some days but overall, when I sit down and think about what we’ve got in place, the procedures, the plan A, plan B, plan C. Yeah, I’m quite confident that we will be fine. If the risk was that high, I probably wouldn’t want to do it,” Dom said.

But all of the men noted that it depends on the day. “It’s a combination [of excitement and nervousness]. I think anyone can relate when you’re doing something that’s going to challenge you, everything goes through your mind at different times,” Ian explained.

When speaking about the dangers of the trip, Dom said: “That’s where the training comes in, we have a vigorous training routine, getting to know everything on the boat, how everything works, how we’re going to work together.”

“And it’s [about learning] how [the boat] operates in bad weather and extreme weather so we can best mitigate issues that we’ll face at sea,” Matt continued. 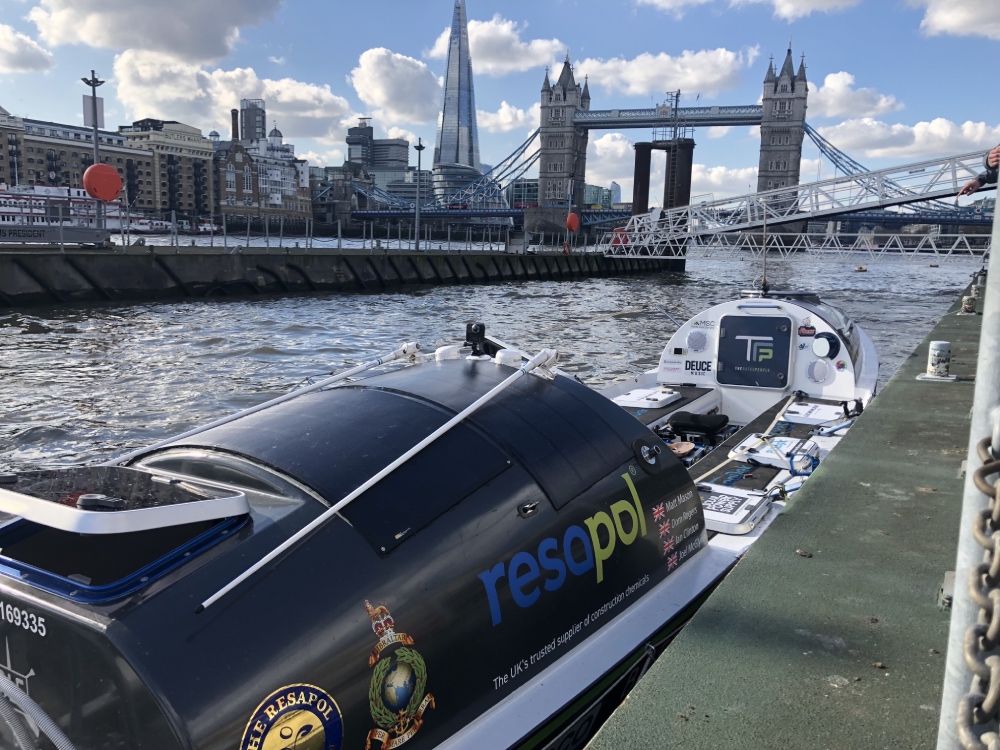 But he notes that this challenge is very similar to those they experienced while training in the Royal Marines: “It’s one of the hardest [training programmes] in the world and you still carry the same mindset [after you leave]. You carry the same sort of ethos where everything has to be done to a standard, everything’s got value to it and you’ve got to hit it.

“Having that mindset on the boat, having that discipline to do the small jobs. That’s what gets you through it. Ocean rowing, it’s not about fitness; it’s about mental resilience and endurance.”

Ian added: “It’s all about getting comfortable with being uncomfortable. I think that’s what the Royal Marine training does. It shocks you in your whole day to day life, whatever you’re used to and puts you in a whole new environment. This is exactly the same.”

The men expect the journey to take between 60 and 100 days, but will only be able to carry enough food for 70 days. “We’re going to be rowing for two hours on, two hours off non-stop, unsupported for 70 days. Well, hopefully it’s 70 days, hopefully it’s less,” Matt said with a laugh. “If it’s more I won’t be happy, I don’t think my wife will be too happy either. It’s going to be difficult but that’s part of the challenge.”

Speaking with all four of the commandos, you get a real sense of their love for their families. Dom described missing his wife and children as the biggest “mental battle” whilst Matt admitted that he was worried: “I’m really anxious, really nervous because I’ve got two really young boys and I’ve never left them for a long time.”

Similarly, Ian became a father earlier this year and expressed his sadness in leaving his daughter: “I know I’m going to be upset coming back because I realise how much can change and what I’ll have missed but it’s the nature of the beast and that’s why I’m here.”

Joel spoke about the nature of the challenge and how having a young daughter inspired him to take on the challenge in the first place: “I’m absolutely dreading [leaving my daughter], but I’d like to think that I’m making a positive impact for her future and that’s arguably one of the biggest motivations.” 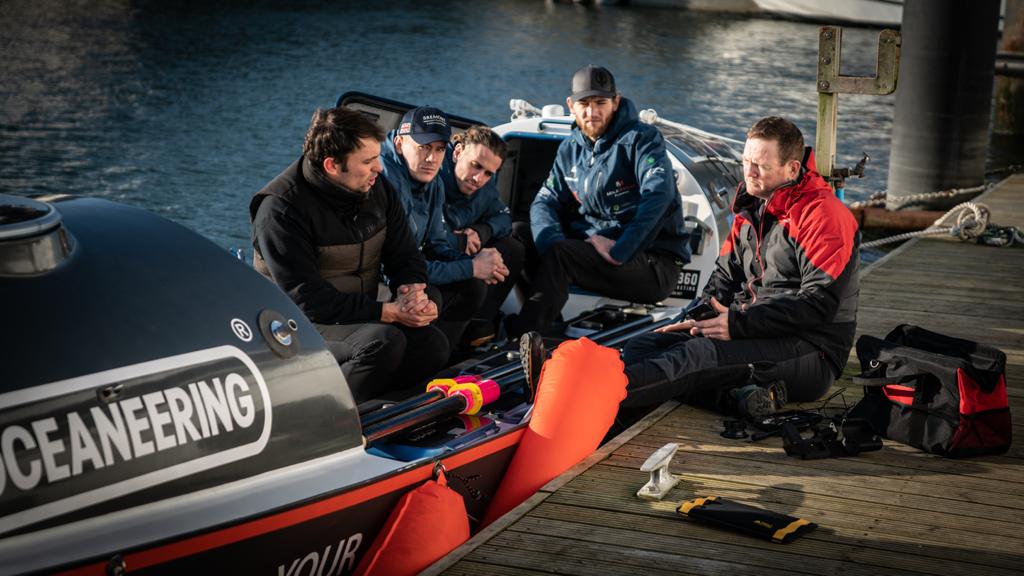 Having toured together previously, one might expect that the team are well prepared to spend such a great deal of time together but being in such a confined space has its limits: “I think the time we spent in Afghanistan [will be beneficial]. We were there for six or seven months, but you had time to go and be on your own whereas we don’t have that option,” Dom said.

However, he was hopeful that they’ll work well together: “It is going to be stressful and we’re going to be tired, hungry, wet and cold, but we’ve got an idea of how it’s going to be.”

“We’ve done a lot of physical training, so we all know each other’s capabilities when it comes to physical fitness and that side is very natural,” Joel added.

“You get used to working in highly pressurised situations and dangerous situations as well, so I think it builds that mindset up to understand resilience, perseverance, sacrifice and hard work.”

To date, the team have raised over £45,000 for both charities and have now set their eyes on a much higher target. “We just really need people to donate and get some money. We’ve got two amazing charities,” Matt said. “If anyone’s got a spare fiver to throw in the bucket, it would be great to get it in there.”