The impact a global pandemic would have on society as we knew it was something experts had debated and researched many years prior to actual events that have unfolded over the last 11 months.

Unfortunately, like many of us, the beauty industry was not prepared for the effects that a nationwide lockdown would have on businesses, from the big guns, to the independent salons.

With hair salons having to close for five months and clinics that employ aestheticians, make up artists and therapists being shut for longer, not only did the average client not have access to their favourite beautifiers, but some even saw a shift in their beauty priorities. 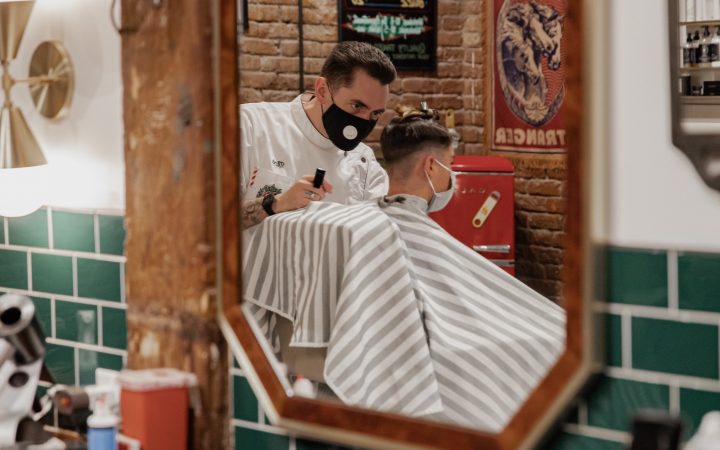 Barber’s were allowed back if wearing a face mask [Unsplash: Logan Weaver]

It’s an industry that contributes £28 billion annually to the nation’s economy, but when it came to opening society back up following the first few months into lockdown, it was left in the dust as though it was merely a frivolous, luxury expense, with the women running the industry being some of those most heavily affected.

Barbers were allowed to open relatively early after the relaxation of rules, with some performing services that were being used as ammunition as to why the clinical side of the industry could not open such as beard trims and nose waxing (both incredibly close contact facial services).

In more evident discrimination, make-up artists who are in, more or less, the same level of contact as hairdressers, were not allowed the basic right of booking clients into appointments. Even more shocking, celebrity make-up artists began sharing back to work selfies on social media while the self-employed were stressed at home over making ends meet.

Many argued that the beauty industry was more ready to work through a pandemic with the restrictions in place than many other industries. Many of the services that they provide already require the highest level of sanitisation between clients.

Those that provide facials at a clinical level, for example, are extensively trained in how to keep a highly-sanitised working environment. Yet until August 15, they were not allowed to perform close contact services whilst barbers up and down the country provided beard shapeups and nose hair removals with little to no protection or consequence.

One of the most vocal advocates for the reopening of the beauty industry was beauty industry veteran and advanced aesthetician, Caroline Hirons, who nowadays shares most of her knowledge through her highly successful skin care blog and her New York Times best seller Skincare.

When the favouritism towards beauty services that served a dominantly male clientele became more and more apparent, Caroline founded Beauty Backed on August 3, in the midst of confusion for those in the beauty space following the government retracting its allowance of close contact services the evening before the set date on July 31, which led to panic and added financial and emotional stress for all those affected.

Beauty Backed is a non-profit fundraiser set up through Go Fund Me. It was created in association with The Hair and Beauty Charity, with the campaign stating on its website: “100% of your donations will be dispersed via the Hair and Beauty Charity who in turn donate to the individuals and businesses who apply for help to stay afloat following five months of restrictions.”

With the support of the British Beauty Council and the British Association of Beauty Therapy and Cosmetology (BABTAC), the campaign had the aim of “raising money to support those who despite being completely prepared with all the PPE the world could find, were not given the go ahead to return to work for months.”

With many in the industry being self employed, the furlough scheme and grants that the government initially announced only supported a small part of the industry. Those that are self employed rely entirely on their income to manage their expenses, meaning the stress that came with not knowing where their next pay check would be coming from was overwhelming.

“Support those who despite being completely prepared with all the PPE the world could find, were not given the go ahead to return to work for months.”

We spoke to self-employed hairdresser, Roberta Melina, based in the East Midlands, who dealt with the stress of figuring out her business’ finances during unprecedented times.

“It was hard, I spent a month of the first lockdown crying. When you’ve got a business, you’re scared of closing because you’re worried about your mortgage and your car payments and all the other bills. Before (lockdown), you put your outgoings depending on your income, then our income was taken away but everything that needs to be paid is still going out and it definitely made me panic.”

When the Self-Employment Income Support Scheme, which would cover a percentage of a self-employed individual’s profits, was announced, it was set up to be quite simple: “It was actually quite easy! I went through the government website and you put in your details and it gave you a date for when you could apply and then on the date you filled in a form online and I within five days I got the 80%.”

The frustration that many across the nation were feeling after the government retracted their statement allowing close contact facial treatments in July, along the other side of the beauty industry such as hairdressers and barbers wasn’t lost on Roberta and her family.

“For one reason or another some people did not come back”

Roberta’s mother works in the same salon, which is owned by her father, as a nail technician and was not allowed to open bookings until weeks later, despite the fact she had all the appropriate PPE.

“It was frustrating! In reality, they way her set-up is with the plexiglass screen between her and her client, she is in a way safer than me or my dad when working with clients. She did manage to come back into the salon two weeks after us but work for her has been really slow.”

Like her mother, Roberta has noticed a change in her customers appointment habits: “We were crazy busy the first two weeks after the first lockdown but then business cut by half.”

Even after the beauty industry resumed their services, after five months of not having access to hair, nail or lash appointments, the way people looked at themselves changed.

“For one reason or another some people did not come back, or they all came as soon as the lockdown was lifted and now they have found they can go longer between appointments because they have got used to their grown out hair.”

It is for this reason why supporting campaigns such as Beauty Backed, which in turn support charities like The Hair and Beauty Charity, is so important.

The beauty industry may contribute hugely towards the economy but it is struggling to stay afloat, mainly because those who work in it are struggling to pay bills and keep a steady income while some do not even qualify for government grants or schemes.

The Beauty Backed campaign is still ongoing with all funds continuing to support The Hair and Beauty Charity – to donate click here.