Under the red glare of a neon strip light, a woman and her daughter examine the offers stuck to the condensation-covered glass in a small fried-chicken shop in Stratford. Inside, Yamini and her mother kill time by talking while sitting behind the counter.

It is the first day after the clocks went back and night falls at 5:00 pm. No more customers are expected until dinner time and the chicken shelves are bare. Yamini’s father, who opened the restaurant eight years ago, looks out from the kitchen every time the door opens.

Although the coronavirus pandemic has imposed a vast loss on the business, they still attract a significant number of customers. The new lockdown opens up new possibilities to recover what they lost during the first one, unlike the fried chicken shop at the end of the street that closed down. Most of the competition that remained open managed to cash in during the crisis.

Their main clientele before the pandemic was school pupils and hungry partygoers migrating from the pub across the street. Covid restrictions mean pupils were the only regular remaining punters for the fast-food businesses. 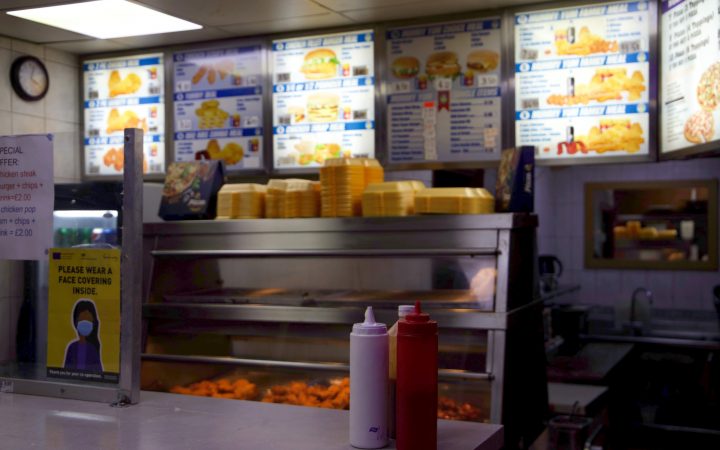 Such is also the case with a bustling fried chicken shop in a busy high street in East London, Mile End, also known as Chicken Shop Mile due to the massive presence of such outlets. The number of young people coming and going off the venue is overwhelming. The ‘Bossman’ affirms that many teenagers visit his space because they are allowed to stay in the shop as long as they want to for a ridiculously low price.

Across the street, two pupils wait for the bus eating the chicken wings they have just bought from another shop. Patrick, 15, says he prefers not to eat during the day so he can eat out after school. His friend Jeremy thinks eating at the school canteen “is not cool”. They have takeaway food at least three times a week.

A study found in 2012 that more than 50% of children bought food or drinks from a fast-food or takeaway outlet twice or more a week. Among the reasons why young people consumed this type of food was dissatisfaction with their school meals and the poor value for money they represent. Most participants said they did not eat anything during the day at school and then went to a fast-food restaurant.

One of the reasons for the growing consumption of fast food among young people is that these outlets tend to be within walking distance of schools, a fact that is particularly evident in disadvantaged areas. In these environments, fast food restaurants are unusually numerous, as several studies have found. 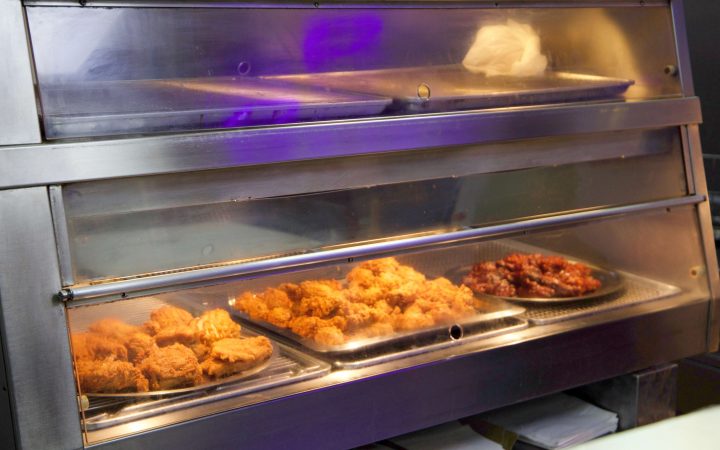 In Tower Hamlets, for instance, the fourth most deprived borough of London in 2019, there are 42 fast-food restaurants for every secondary school, 627 in total. In the neighbouring borough, Newham, the sixth most deprived, there are 411 takeaway venues and 30% of these are exclusively for fried chicken. However, these figures do not include fast-food chains such as KFC, so the numbers are likely to be even higher.

Accordingly, the rate of childhood obesity in these areas is much higher than the average. Newham is the  borough of London with the second highest figures of obesity: almost 28% of six-year olds are obese and children aged 10-11 years old are more than twice as likely to be obese than the children in the boroughs with the lowest figures.

In 2013, Shift Design, a charitable foundation and trust, developed a pilot test to provide young people with healthier takeaway food at an affordable price. They set up a food truck near several schools in Newham for a month and sold 300g boxes of low-saturated fat chicken, vegetables and rice for just £2.50. Pupils told them that they liked having a cheap alternative to the fried chicken they usually bought. The successful pilot became Box Chicken, a social enterprise operating in South London and providing a healthy alternative to the conventional consumption of chicken.

Shift’s Healthy Food Programme Director Chris Holmes has conducted extensive research into the impact of independent takeaways on childhood obesity. One of the main problems he has identified is that the streets are overcrowded with fast food sites, with unbeatable offers, and attractive advertising.

He says young people are vulnerable to excessive fast food in their local areas, with little room for advertisements of healthier choices, which are, in turn, tedious and unattractive: “Food is not the only reason why young people go to takeaways. Young people value the physical and social environment of takeaways; they are warm, non-judgemental, friendly, safe places to sit with friends.”

After school, the spaces available for young people to meet are limited and the long afternoons of free time often end up in fried chicken shops where they can stay as long as they like without spending much money.

Medical student, Akashi Alam defended the importance of fried chicken shops and the role they played in her childhood in a TED Talk. She says they did not go there for the food but as an alternative to the small, crowded houses where they lived. She argues that fried chicken shops are providers of an essential service: space.

Spaces that provide young people with an area to socialise are increasingly limited, so customers unconsciously seek places where they can meet in their free time. Consequently, fried chicken shops have transcended fast-food joints; they double as legitimate loitering lounges for fundamentally deprived communities of inner-city youth.

Experts suggest that local organisations should be willing to work with businesses to improve the attractiveness of healthy food and encourage consumption. Just as schools should redesign canteens to offer young people more free spaces where they can develop in a safe and non-judgemental environment.

By Hamida Ali
4 Mins read
How gentrification aims to replace existing residents and their livelihoods.
HealthVideo

By Stella Schmieder
1 Mins read
Various futuristic gadgets support the lives of people with diabetes. We discuss the progress of modern health technologies with the Diashop-Team in Berlin, Germany.
Health

'A perfect concoction for a mental health crisis'

By Layla Nicholson
7 Mins read
The pandemic has been tough, but a new study says those with an eating disorder are most vulnerable to the complexities and limitations of lockdowns.