There’s little argument that eighties pop culture was led by leg warmers, perms and the advent of MTV, but most importantly, by Diana Spencer, the Princess of Wales.

The decade that introduced us to Whitney Houston and Madonna, also popularised the media circus that now follows celebrities across the globe in the 21st century, and it was all centred around one person.

The country had been waiting for years for Prince Charles to settle down and for another royal wedding to grace the nation’s televisions. So when the media got a whiff of the new rumoured girlfriend of the prince, they jumped on the news.

What no one was prepared for, not even the Royal family themselves, was just how in love the country (and eventually the world) would fall with the new princess. So, as the demand grew for information on the princess, so did the supply. This created arguably the largest and longest media frenzy that anyone has yet to experience.

The impact Diana had on how the paparazzi operate is something that most people are aware of, Netflix’s The Crown has seemingly reinstated the princess’s title of ‘The People’s Princess’.

A whole new generation, who were barely born or not even a twinkle in their parents eyes, got to witness the events that enamoured the world in the latest season of the show.

The Crown, which is on its fourth season and has been confirmed for another two, has followed a decade of the royal family in each season, casting different actors as the Royals grow older and move into different seasons of life.

Created by Pete Morgan, the show had a large cult following since it aired on the streaming platform in late 2016, the fourth season that aired at the end of 2020 captivated their audience in the exact same way the public was obsessed with Diana in the years she was in the public eye.

The latest season follows the love triangle between Diana, Charles and Camilla Parker-Bowles and the trials that the royal couple faced in their marriage amongst other events that the royals were a part of.

Although not entirely based on facts, the show has imagined dialogue which loosely portrays what many believe to have been going on behind the scenes.

And even though the writing wasn’t on the wall back then, these imagined scenes have stirred up similar emotions towards the marriage in a whole new generation.

It is well documented in history how Diana became the people’s princess, from inspiring fashion moments, to shinning a hopeful light on the AIDS epidemic at its height.

This meant that from early signs of troubles in the marriage to the days and even months and years after her death, the other side (the Royal Family) had been the labeled the bad guys who had betrayed the heroine the public was infatuated with.

Viewers of the show in the year 2020 share the exact same sentiment with ‘Diana’, ‘The Crown’, ‘Camilla’ and ‘Prince Charles’ trending on Twitter for days following the release of the latest season.

A whole new generation that knew perhaps just the highlights of the story suddenly knew more than any of us could even prove to be true, but matched the views of those who were just as invested in the 80s.

The general consensus being that Diana was too good for the Royal family, particularly Charles, but also that people were simply engrossed in how charming and captivating the princess was.

This is also partially down to actor Emma Corrin who portrays Diana in an eerily accurate manner, but it has a lot to do with who the princess truly was in the eyes of her fans during her heydays.

Corrin’s uncomfortable scene with Emerald Fennell in a London restaurant, showed the audience just how involved Camilla was in the couple’s life, something that maybe the public wasn’t all too aware of at time but this modern audience were quick to jump on the ‘we all hate Camilla’ bandwagon.

[pullquote align=”right”]”This modern audience were quick to jump on the ‘we all hate Camilla’ bandwagon.”[/pullquote]Camilla wasn’t the only Royal catching the blame for the portrayal of the treatment of Diana. Much like 30 years ago, the public blamed Prince Charles for many of the issues that Diana faced during her time as a Royal.

Because the show portrays Diana’s bulimia and depression, which she eventually openly discussed in the infamous BBC Panorama interview, as a direct side effect to his mistreatment of their marriage.

Charles is openly disliked for his inability to have been faithful in his marriage to Diana, a feeling that was true three decades ago, and is still true today.

In true Generation Z fashion however, there isn’t much that can’t be memed and many fans of the show took to twitter armed with puns and digs aimed at the Prince of Wales. 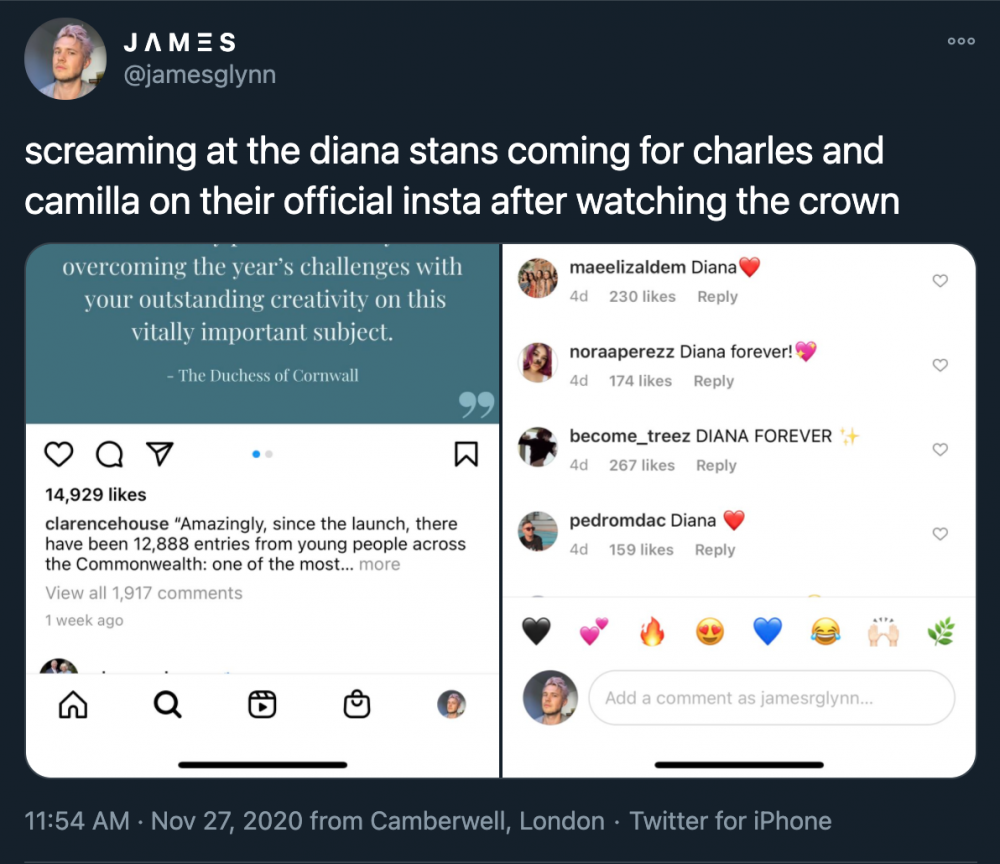 Many called for Charles to abdicate the throne, some simply expressing their dislike for the behaviour portrayed by Josh O’Connor as Prince Charles, some even took to trolling the official Clarence House instagram account, which solely posts updates on the Prince of Wales and Ms Camilla Parker Bowles, by flooding their comments section in the weeks following the season’s release with “Diana Forever”.

However, even though many watched the show and made light of the situation on Twitter, as it is of course a dramatisation of what people believe was maybe being said behind closed doors- Diana’s mistreatment by the press, according to some, should have been a word of warning.

It seems to many that this should have been a learning lesson for when it later came to dealing with Meghan Markle joining the family. Her Royal Highness The Duchess of Sussex, was endlessly scrutinised and hounded by the media, just like they had Diana.

If it hadn’t been for her husband having witnessed his own mother being torn apart by the media, the Royal Family seemingly were willing to stand by and witness history repeat itself. 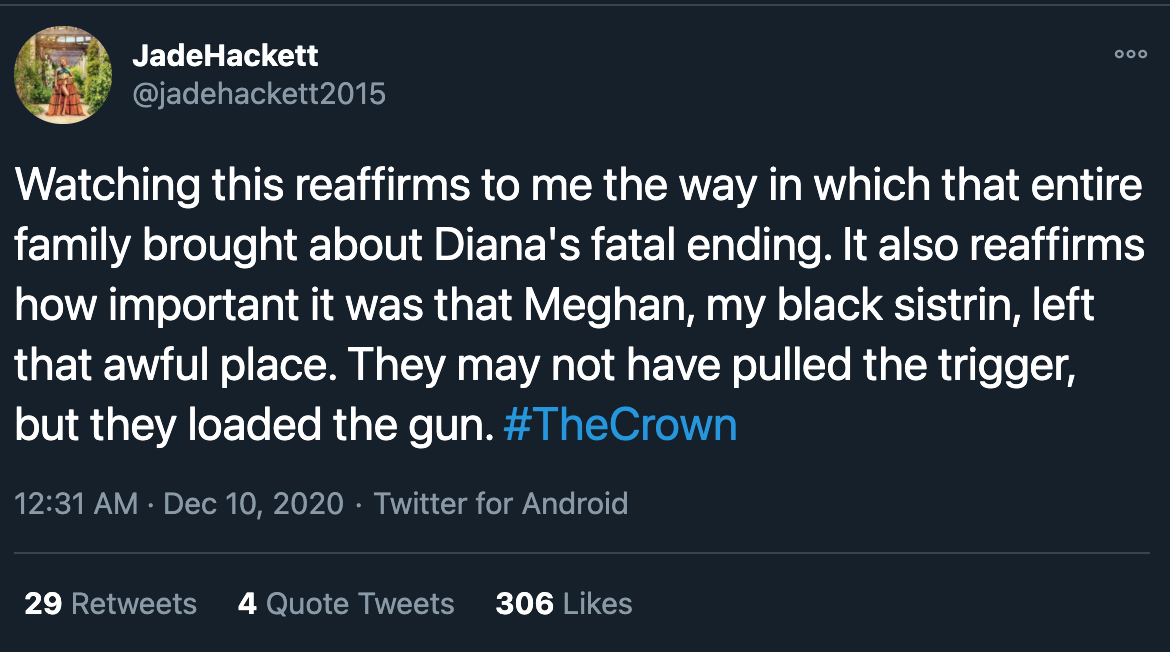 Unlike the 80s, Meghan Markle had married a man who loved her and wanted to support her. Many have shared on Twitter how glad they were that Prince Harry supported Meghan and were glad that they made the decision to leave the royal family.

The Crown has since been criticised by Royal family fans such as the British government’s culture secretary. Their portrayal of how the Royal Family treated Princess Diana has angered some, and there was has even been a call for there to be a disclaimer before the show to warn people that not all events in the show are in fact as they necessarily occurred.

Netlfix has denied any request, stating that “We have always presented The Crown as a drama — and we have every confidence our members understand it’s a work of fiction that’s broadly based on historical events, as a result we have no plans — and see no need — to add a disclaimer.”

It is the general public’s understanding, no matter how old or how young, the injustices that were carried out against Princess Diana should have taught the world a lesson in how abusive the media can be. Yet celebrities face it day in and day out, the sad fact being that the treatment Diana received was very much the blueprint for how the media cycle functions today.

When it comes to the treatment she received from the Royal Family, there isn’t much public opinion can do to change that but it is a relief to see at least Prince Harry learnt from the past and rectified the present situation in hopes for a better future.

At the end of the day Princess Diana was a trail blazer in many ways, not all of them great, but it is a true testament to what she stood for, that decades later she is still winning the hearts of generation after generation, and is still being hailed as ‘The People’s Princess’.

By Shannon Casey
4 Mins read
Viewers of the new Blonde film on Netflix have major concerns about the way that women like Marilyn Monroe are portrayed.
21st-century trends

2011: ‘The King’s Speech’ heralds a change in attitudes towards those with speech impediments

By Nadine Natasha
4 Mins read
The sensitive portrayal of Queen Elizabeth II’s father and his problems with public speaking, raised awareness of an overlooked disability
Culture

By Rosie Paldi Edwards
6 Mins read
After Netflix’s acquisition of the entire Roahl Dahl catalogue, we examine what people think of remakes.