With weekends spent inside and Netflix options running out, many of us are finding ourselves with a lot more time on our hands. Creatives are using this time wisely by developing their existing skills, learning completely new ones or, for the most ambitious, doing both.

The pandemic managed to persuade a largely digital generation to peel away from their screens and try something new, and many Generation-Zs across the country have been swapping their keyboards for knitting needles.

Carrie is 20 years old, and took up knitting having “gotten bored of sitting in front of a laptop all day.” Working from home means that Carrie spends most of her time hunched over her desk staring at a screen, she wanted to find a hobby that was a complete distraction.

“Knitting is so different from my 9-to-5 that I stop thinking about it altogether (even if it is just for a couple of hours). I’ve only ever seen fashion as a personal thing, like what I choose to wear or buy. But since I started knitting, I’ve begun actually showing an interest in trends and following different designers.”

Carrie’s most recent inspiration came from Stine Goya, a Danish fashion designer who established her namesake brand in 2006. In February, designers showcased their Autumn/Winter 2021 collections in the first fashion week of the year at Copenhagen. Stine Goya’s ‘digital catwalk’ was full of vibrant colours and patterns.

“Her designs are bold and speak to a playful side of my design taste. Her latest collection includes a bright, orange knitted vest and clashing coloured jumpers. I’m still learning so my biggest accomplishment has been knitting a small, perfectly imperfect scarf, but I’m slowly getting there. Once I learn the basics and get the hang of knitting, I plan to try making garments inspired by Stine Goya’s most recent collection,” said Carrie.

“Knitwear has always been an important element of winter fashion, but over the past couple of years, its prominence has increased. The knitted sweater vest trend has remained popular since its resurgence in autumn last year and I can see it sticking around for the foreseeable future.”

Jemima Ryde is a Textile Design student at Chelsea College of Arts who specialises in knit: “In the past, a lot of people have said that it’s quite a ‘granny thing to do’, but not only do I think it’s bloody cool, it’s also a massive part of the fashion industry. Everyone has knitwear in their wardrobe, you’re probably wearing it right now on your feet,” she said.

“It’s definitely risen in popularity since lockdown. More knitwear trends are making their way into mainstream fashion. A good example is the patchwork trend. Historically, patchwork was a way of using up all the excess fabric or scraps; now it’s a fashion statement in its own right.” 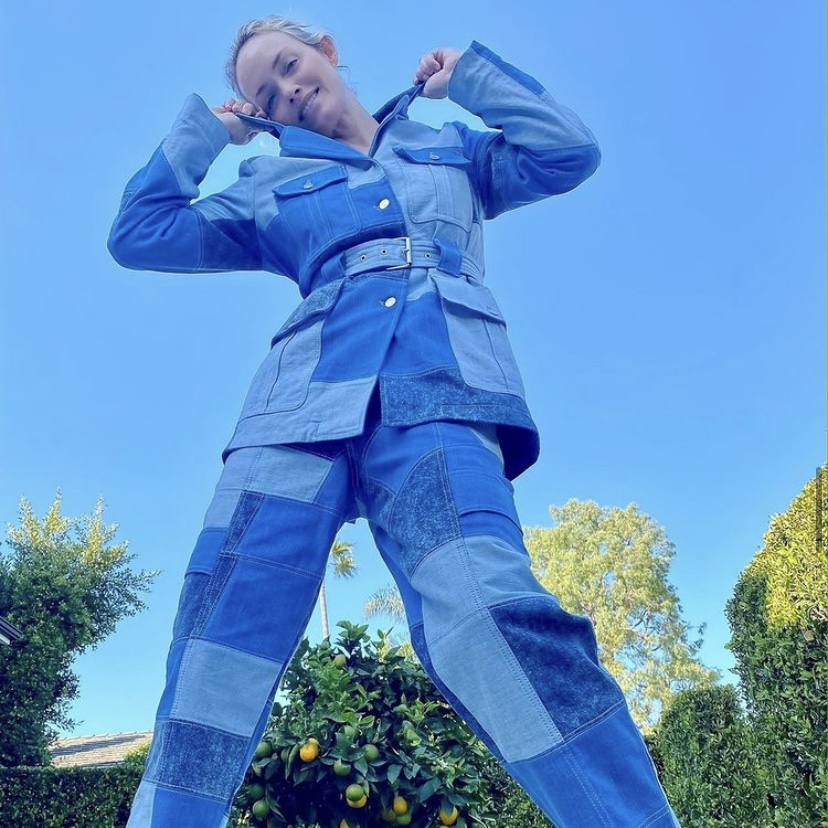 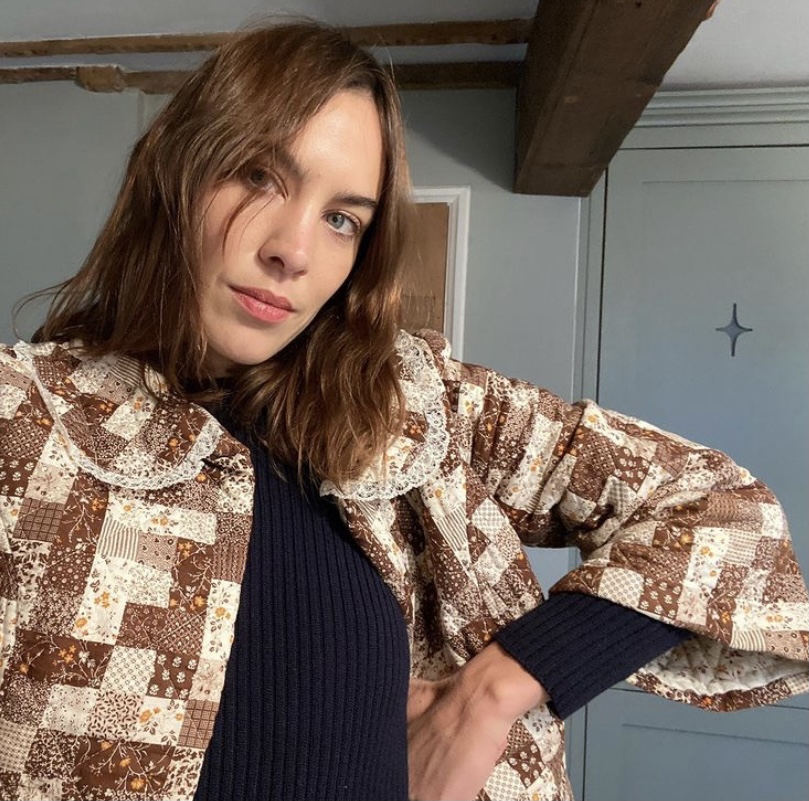 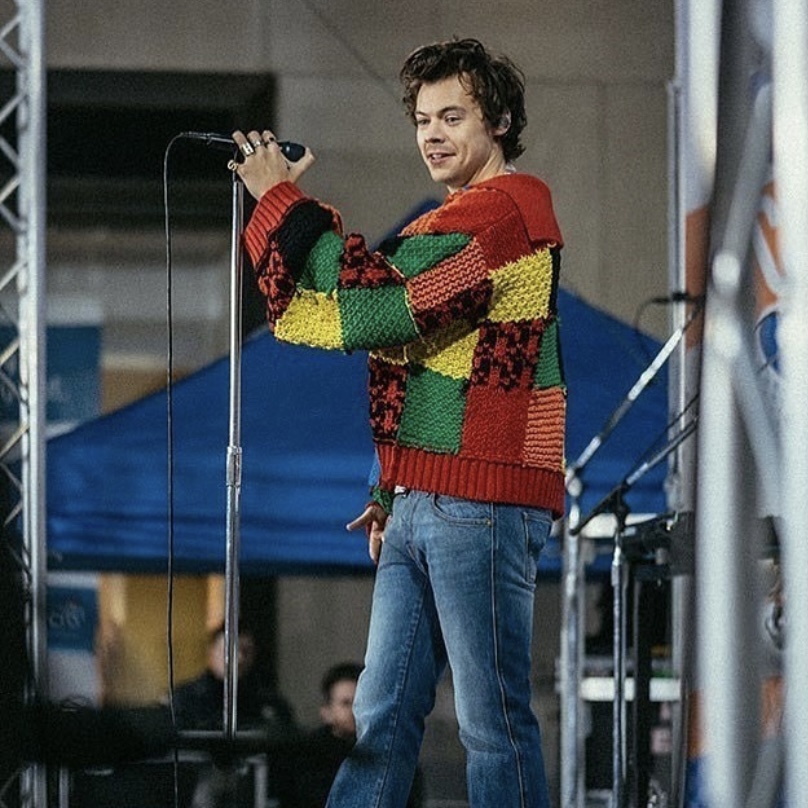 The ‘Harry Styles Cardigan’ (pictured above on the right) created a viral TikTok craze in early 2020 as people all over the world were recreating the cardigan in their own homes.

One wardrobe choice created an online fashion frenzy, so much so that JW Anderson’s founder and creative director, Jonathan Anderson, made the pattern details public. The V&A has now acquired the cardigan and will be adding it to their permanent collection. 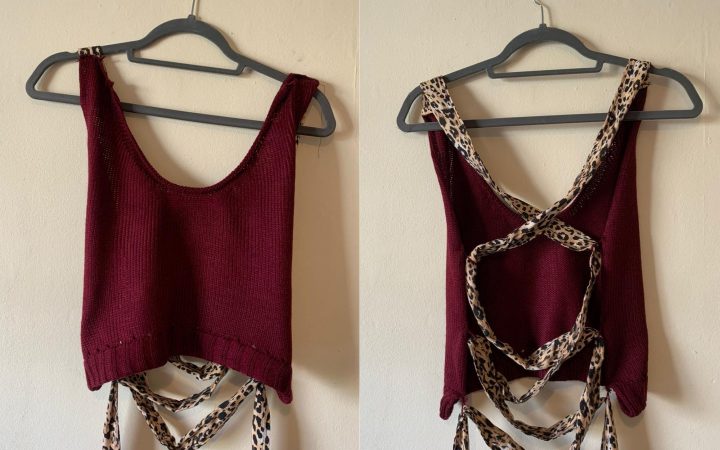 The renewed patchwork trend pays homage to 1970s fashion whilst keeping in line with current
trends. The desire for conscious and ethical standards when it comes to our clothing has dramatically increased. Sustainable fashion is a trend in itself. The industry and its consumers alike are taking steps to embrace eco-friendly products as slow fashion begins to make its mark.

“I remember in the first lockdown, everyone was clearing out their wardrobes and finding clothes that didn’t fit or they’d never worn, but they couldn’t take it anywhere because all of the charity shops were closed. That, mixed with weeks upon weeks spent inside, probably inspired people to start reusing their old clothes,” Jemima told us.

“Reworked items became so popular on sites like eBay and Depop. People were able to create a whole new wardrobe by looking at their clothes as potential fabric rather than something they didn’t need or want anymore.

“Once you run out of clothes to rework, you have to start looking at other alternatives, which is where knitting comes in. I fell in love with knitting because it’s a way of creating something out of nothing. You have to start from scratch when you knit; you create the whole fabric, meaning whatever you make is unique and original, even if it’s just by one stitch,” she said.

“I’m glad knitting is moving further and further away from a ‘granny-like’ activity, and towards an irreplaceable part of the fashion industry with a purpose much bigger than keeping you warm.” 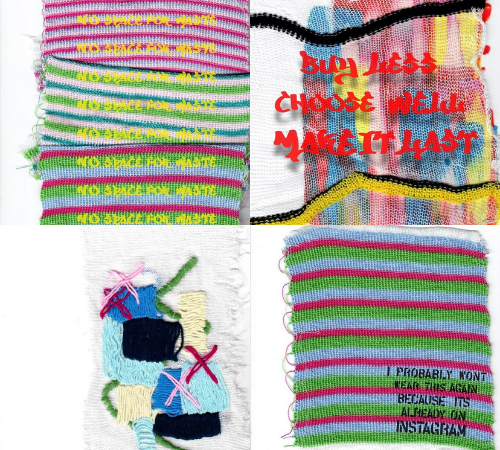 The crisis has been at the centre of many people’s stress and anxiety over the past year. Not only is knitting a creative, fashion-forward hobby to try, it’s also been proven to be a therapeutic way of reducing the weight of these feelings.

“It’s so therapeutic. It distracts you from everything else around you. You’re so concentrated on knitting that any negative thoughts seem to go away and you can actually relax.” Jemima told us.

Having discovered the positive effects of knitting, former NHS physiotherapist Betsan Corkhill founded Stitchlinks which promotes the health benefits of knitting in reducing stress and anxiety, and alleviating depression and intractable pain.

“The rhythmic repetitive movements induce a form of meditation similar to mindfulness; that pleasant state of mind when you’re existing ‘in the moment’, not mulling over the past or fretting about the future,” said Corkhill. “Knitters find they can ‘zone out’ and escape into the sanctuary of a quiet mind,” Corkhill told The Daily Mail.

Layla took up knitting late last year during a stressful time at university: “I was really overwhelmed at the time and had numerous deadlines looming over me. It was becoming increasingly difficult to cope. Every student considers dropping out of university at least once, but at this point, I was ready to commit and chuck in the towel,” she told us.

“My grandma has always been good with arts and crafts and she suggested that I take up some sort of activity to take my mind off work (at least for an hour or so). Next thing I know, a parcel, with knitting needles and a ball of yarn inside, arrived on my doorstep.

“Honestly, I thought it was silly at the beginning, but my grandma asked me to keep her updated with my progress, so to avoid her disappointment, I decided to give it a try. Now, it’s the one thing that I do for me so I can unwind after a day of work.”

So, whether it’s stress-relief or sustainability you’re looking for, knitting could be the solution. And who knows? You might get a perfectly imperfect scarf out of it.