There has been an uproar in the past year within the student generation, amid concerns that they are being ignored by the Government.

The situation stemmed from the government’s introduction of a national lockdown just before Christmas 2020 where students were told to stay in accommodation alone for Christmas. Followed by multiple announcements by Boris Johnson whom students suggest, especially on Twitter, discussed everyone except university students.

Regardless of the controversial regulations, many students continued to go home the evening of Boris Johnson’s announcement in preparation for the national lockdown the following day. The issues have continued after students returned to their university accommodation, as winter term began.

There has been an outcry on social media platforms, especially Twitter, discussing claims that university students and their position during the current national lockdown are being ignored.

Students have been left confused as to where they stand and how they are supposed to be studying in their accommodation with the high pressure of university work and exams, with little confirmation about when their campuses will be re-opening.

Twenty-two year old university student Carmelia, is currently living in London for university, away from her home town of Manchester. 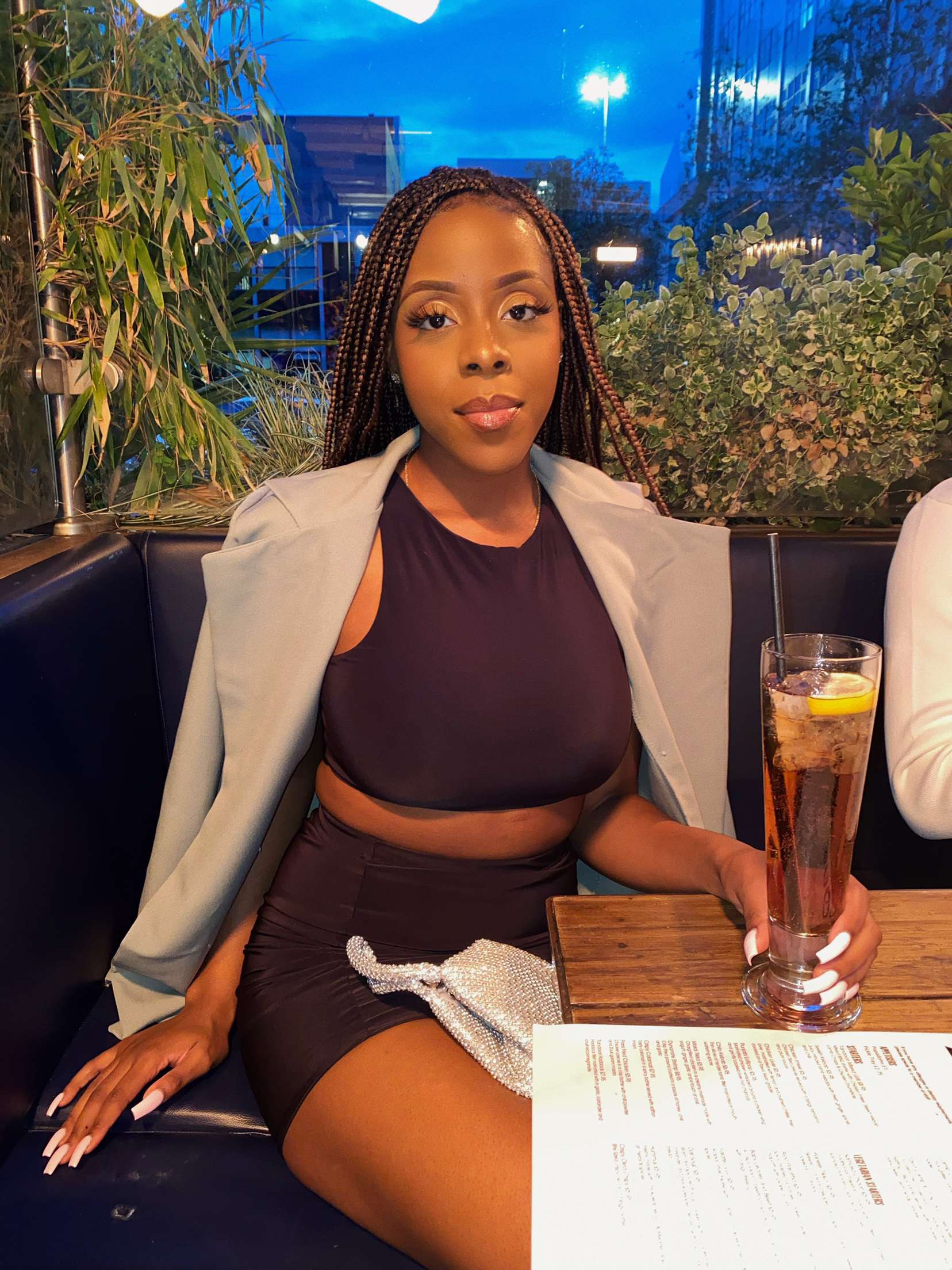 Carmelia in happier times before the lockdown [Carmelia]

“When Boris announced the lockdown I had to basically leave London as soon as possible and even leaving London was a stress, I couldn’t go straight to Manchester, I had to go to Birmingham and my dad had to pick me up from there, it did cause a lot of stress, having only a small amount of hours to leave London,” she said.

The regulation that has affected Carmelia the most is having to stay at her current location in London unless it is for exercise or essential shopping: “now I’m back in London, being told that I basically can’t leave London is stressful because there are times when I feel so overwhelmed and, I just want to go back to Manchester because that is my home.”

Discouraged, Carmelia believes she has not dealt with the third lockdown very well, mostly due to “not mentally and physically there when it comes to university because of the lockdown, because doing everything from home, I am someone that prefers to be taught in person, as I do have dyslexia.”

She went on to say: “I’m trying my hardest to do things from home, it’s been very challenging and has affected my mental health as I feel so overwhelmed and have anxiety.”

She believes the government have not done enough for university students: “It’s very stressful because I do not believe that we should be paying this amount, especially when we are in our final year and have to do a dissertation, it should be something that we are taught in person.”

Carmelia thinks that it is too late to help students like herself: “I feel like I have to be taught in person, it’s much better in person for me, I can get more information, I feel more connected and more concentrated.”

There is nothing that can be done due to national lockdown with regards to Carmelia’s situation; face-to-face teaching is not available.

“They [the government] should just reimburse student fees as we are not in proper education, this is definitely not an education at all,” Carmelia said.

Her position has been supported by a petition titled “require universities to partially refund tuition fees for 20/21 due to Covid-19”, which has been signed by 267,056 people so far. The matter was discussed by parliament as mandated by the petition, the UK Government and parliament last debated the topic on November 16, 2020.

“This is definitely not an education at all”

Since then another national lockdown as been put into place. As the issue of Covid-19’s effect on students continues into 2021, is enough really being done by the Government for students?

The mental health toll of student’s studying in lockdown seems to be drastic. People like Carmelia who are finding it hard to study at home are taking to social media platforms to share their disappointment with the current circumstances.

One Twitter user stated: “We always see the government say they are ‘concerned about the mental health of young people’ and then ignore us uni students who have had online teaching since September, yeah we’re suffering too.”

These views are shared by a large number of students who are at home, alone, trying to study for university, and who say they have been disregarded and feel as if they are being left to deal with the current pandemic themselves.

Universities are offering help, but it is in question whether that is enough as students continue to tweet and share their voices on how they are still struggling in this time.

However, it is clear that students tend to blame the government rather than the universities themselves, because the regulations that block their access to university sources does have come from the government. 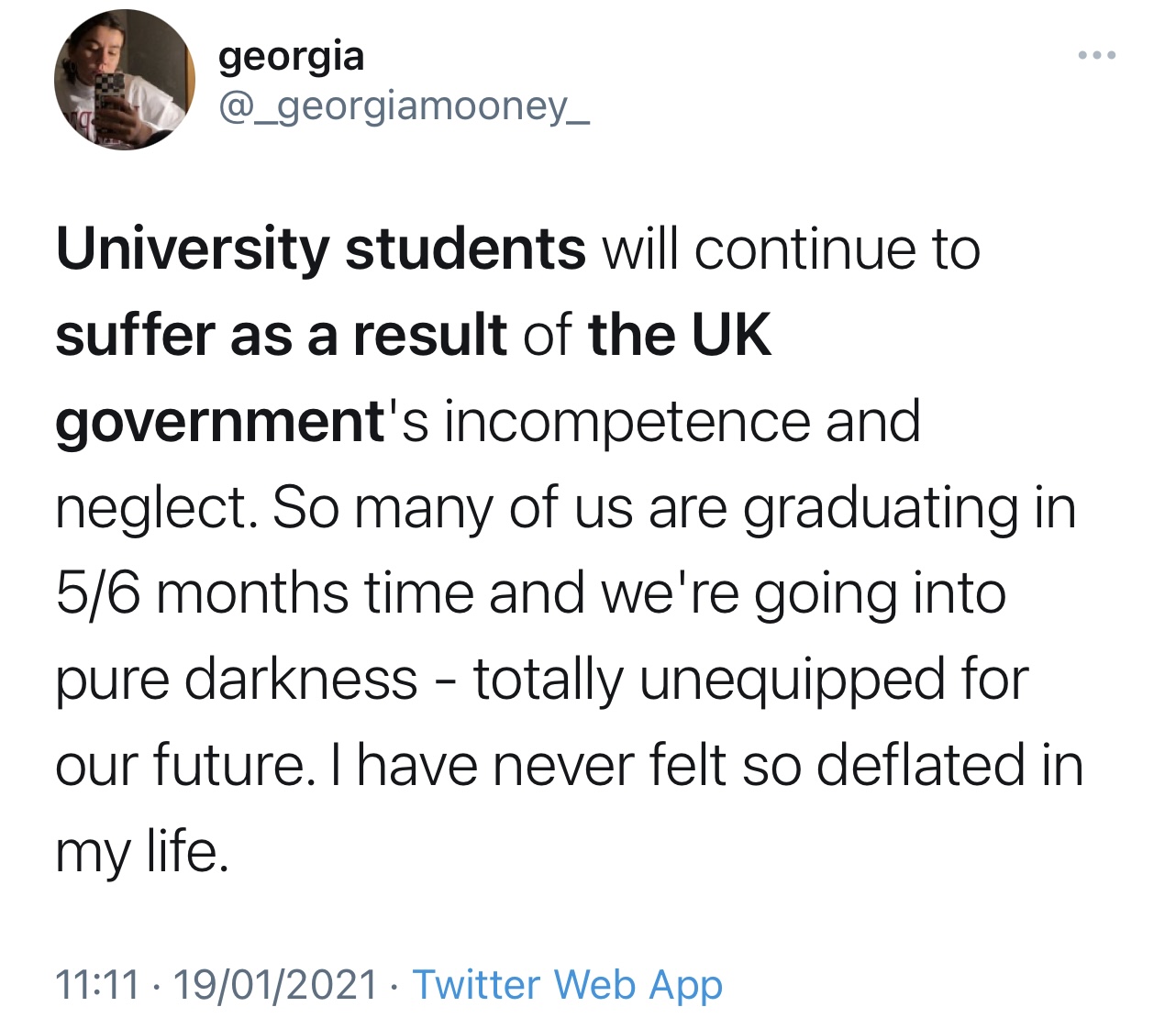 Students have taken to Twitter and stated: “University students will continue to suffer as a result of the UK government’s incompetence and neglect. I have never felt so deflated in my life.”

Many others who are concerned for students have shared their sentiments too. Carmelia’s point of saying that university students should not be paying full tuition fees throughout this time has also been agreed by social media users nationwide.

The BBC states that “52% of the 4,000 students surveyed last month said they’d seen a deterioration in their mental health, but 70% of those affected have not sought any help.”

While assumptions as to when lockdown will finally end have been discussed in the news it is still not clear when students will experience the life university promised them at the beginning of their university education. The initial assumption of lockdown ending on March 5 has been described as ‘unrealistic’ by Boris Johnson.

Pressures will continue to rise for students, especially those in their final year of studies. Now that the end of lockdown is now being predicted for May, they will have finished the final elements of their course. What will be done for them?

A BBC report stated that “schools are closed to most pupils until February’s half-term break but a paper looking at reopening will be put to ministers at next week’s executive meeting.” Again, this disregards universities, but continues the endless amounts of reassurance for primary and secondary schools.

“52% of the 4,000 students surveyed said they’d seen a deterioration in their mental health, but 70% of those affected have not sought any help.”

When going through BBC news online, there are no specific stories based on students and what they should do, despite being an outlet for the majority of the UK to turn to for their information; only stories based on how students are feeling throughout this time. Again, is this enough?

On an Instagram account of 2,200 followers, the majority of which are students between the ages of 18-24 years old. There were no students that claimed to be dealing with online studies well. Concern is growing as all students on this platform felt as if they are struggling during this pandemic.

So what is available for students who are alone and struggling with online studies?

Independent platforms online are helping students deal with this new way of life, offering online support and guidance the best they can for those who feel they are struggling.

An online platform called Student Minds is ready to help students dealing with mental health during the pandemic with “access to dedicated support services for students, by phone or text, information and tools to help you through the challenges of coronavirus, helping you find what support is available at your university.”

Additional support supplied by your university should be available to students, especially with regard to having the right equipment at home, support in studies and in finance. Students should be investigating these and using when possible, especially services that aid mental health throughout these difficult times.

Organisations and universities are putting multiple sources out there for students to use, with the aim of helping students today, although many have been running since the beginning of the first national lockdown in March 2020.

Considering these schemes have been running for so long, they have no students on Instagram saying they are coping well. It is worrying that no one was 100% happy with their current circumstances.