Yuri starts his day with 400-450g of freshly ground boneless lamb leg, and has another 600-700g portion in the evening. Between meals, he sips on purified water, and that is the basis of his daily diet.

Yuri is following a variation of the ‘Carnivore Diet’, in which he strictly only consumes meat, and fish. The lifestyle he follows, MFZC (meat, fish, zero carb) is an adaptation called the ‘raw carnivore’, and he has following this regime for almost five years.

“You can eat either cut or freshly grind raw meat,” Yuri writes on his blog. “But when you first start this way of eating it’s better not to use bought ground meat because it may be dangerous, according to my experience.

“Bought ground raw meat is infested with too many pathogens that enter the stomach, still containing weak acid production. The pathogens survive and reproduce which, in turn, initiates diarrhea. But you can try freshly grinding the raw meat yourself.“

Eating lamb cut into small pieces may work for some, but freshly ground lamb is his preference as “chewing and swallowing the ground lamb is more pleasant and much easier.”

Following a period of adaptation, his digestion became faster and easier, something that he didn’t experience when he ate commercially ground beef.

Artefact spoke to Yuri, who told us he started the MFZC lifestyle after he came to the realisation that he was “sick, and slowly dying” on his previous diet of cooked foods.

He said that his first experience eating raw meat was negative, because of the unpleasant initial taste: “Our taste buds are changeable,” he explained. “If the intestinal microflora changes, the taste can change as well. So, gradually I started to enjoy the taste of raw meat.”

He boasts a plethora of benefits since he started the MFZC diet. After a year, he says his immunity has drastically improved, and that he’s lived without a disease ever since: “I don’t have headaches anymore,” he said. “The clarity of my mind has increased drastically.”

As well as his allergies vanishing, his acne clearing up and building a resistance to cold and hot temperatures, Yuri also claims that the switch to raw meat has halted the ageing process: “The balding process on my head has [ceased] its progression and my hair stopped greying further,” he said. “My skin has become smoother and more elastic, with fewer wrinkles.”

Yuri reports that not only has his libido increased, but his breath is consistently fresh, and he reports that his gums and teeth continue to strengthen.

Although this is seemingly a miracle diet, those intrigued to try are warned that the immediate side effects may prove difficult. Depression, ‘brain fog’, muscle twitching, heart palpitations, blurry vision, ‘keto breath’ and severe headaches are just a few disturbances your body may go through in the period of adaption, he warns.

But in order to feel the full benefits, you have to be extremely committed, a mixture of diets may cause you to become unwell. “Many people continue to suffer from additional health problems and have a hard time adapting because they mix raw and cooked food,” Yuri said.

“Raw and cooked foods are very different, for example, raw and boiled eggs don’t even look the same and have very little in common. Raw and cooked food digest differently, each requiring different times and they are also digested by different kinds of intestinal microflora or gut microbiome.”

He also strongly suggests those with weak immunity, serious or incurable diseases should be “under the supervision of a qualified doctor who knows about that healing abilities of ZC and raw ZC diets.”

But, ultimately, “I recommend this diet for everyone who has the willpower to start” he said. 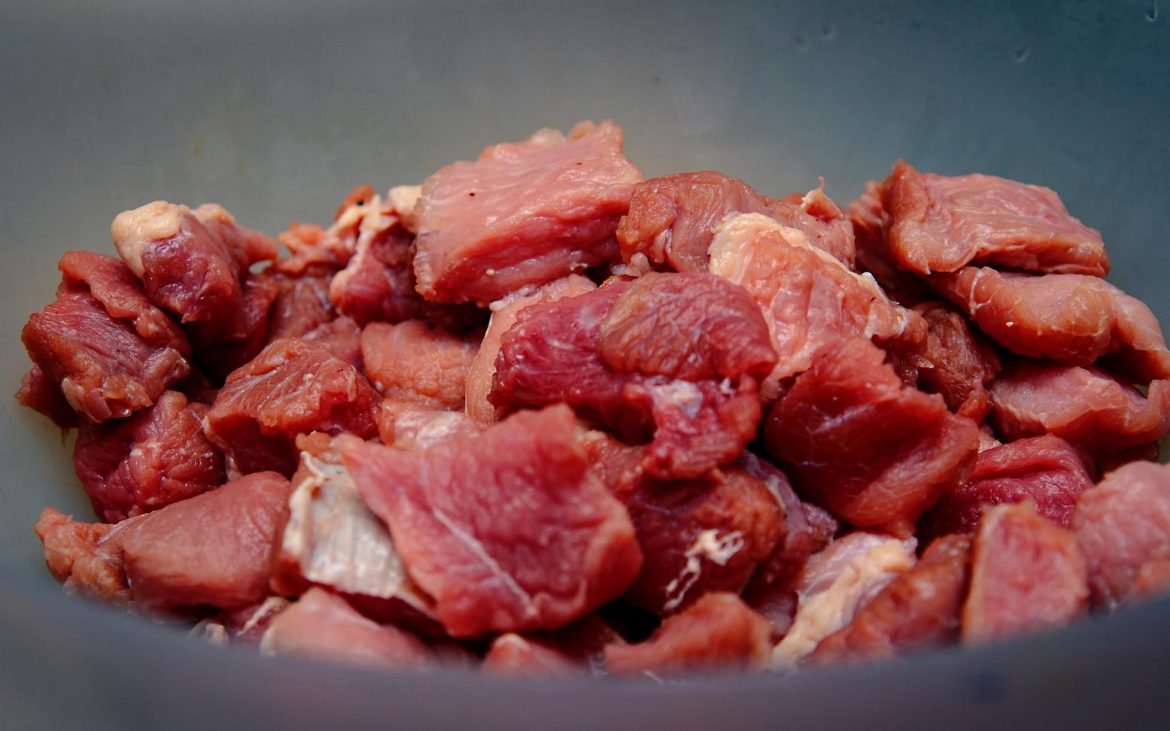 “You definitely have a full set of necessary nutrients from meat/fish and don’t need any additional nutrients from other products including your favourites,” he said.

“Remember at the present time, a truthful common expression ‘listen to your body’ doesn’t work properly if you are under the influence of cooked, fermented or hormonal food, supplements, beverages, medicines, drugs, etc.”

“Also it was confirmed by the north people (Intuits, Chukchas) who lived without viral or bacterial infections [for] hundreds of years, ate mostly raw meat and fish before traders from Europe, Russia, America and Canada brought their processed food and made them chronic alcoholics.”

Yuri claims that you can be around ill people and be immune to the infections “if you are on [the] MFZC diet, pure water and nothing else.”

These claims, if true, are challenging. The ‘right diet’ has been a persistently debated topic, and the MFZC is another example of those exploring what may work for their individual body.

In order to explore the MFZC lifestyle more deeply, and whether a carnivore diet is the direction to go, Artefact spoke to Sophie Medlin, consultant dietitian and director of CityDietitians about the benefits, and dangers, of a raw meat diet.

“We know that people who enjoy the best health outcomes eat a very wide variety of plant matter. So lots of different fruits and vegetables, and lots of whole grains with lots of different carbohydrate sources. Their microbiome, as a result, is very diverse,” she says.

“So this is basically the opposite of what we would recommend people do. And for that reason, it’s really important we get the message across that it is really unsafe for people to do this.”

Whilst meat is a great source of vitamin B, intake of vitamin C may be crucially low as this isn’t easily found in meat and fish products. Iron intake will also naturally be high, and we know these nutrients are essential, but we can not escape that, as Sophie echos, it is “ultimately a very high risk thing to do.”

Eating in a way so different from societal norms can sometimes be alienating, socialisation when you deviate from conventional habits can have other cons that are important to recognise.

“Eating this way can exclude you from social eating, going to other people’s houses for food, from enjoying Christmas and those kind of important things that are culturally relevant and important,” Sophie said.

“When we adopt such an extreme diet, that means we live outside of normal society. It’s not something that is generally associated with good mental health and generally good health outcomes,” she added.

“Having no carbohydrates, you can end up in a sort of different metabolic state, which some people do report being better from. So when you’re in ketosis, but ultimately it’s not something that we would medically recommend that people maintain over a long period of time.” 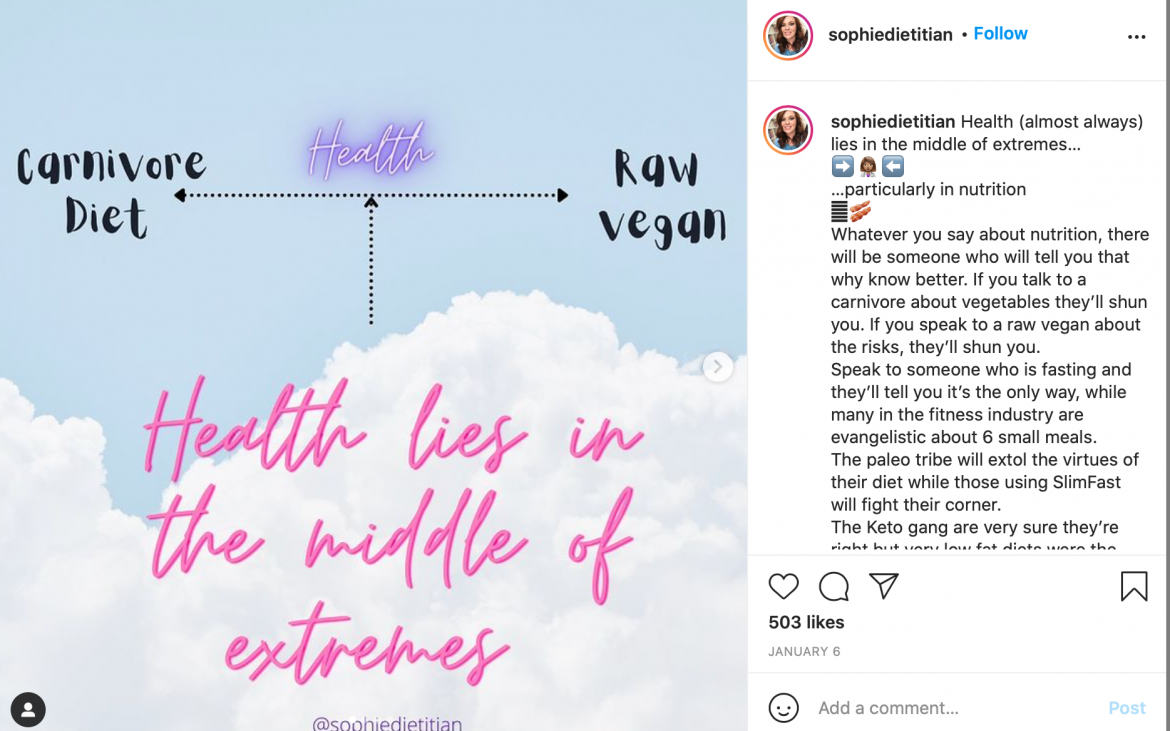 Health lies in the middle of the extremes [Instagram: Sophie Medlin]

“You can go to either end of the spectrum, the health will lie in the middle of the extremes both physical and social health, and both points (carnivore and vegan) will cause efficiencies and elements in their own way. Whatever people claim, and however long they claim to have been able to do it without getting ill.”

At the opposite end of the dietary spectrum, there is raw veganism. Raw diets such as this are classed as foods that have never been heated above 118°C.

The belief is that cooking foods destroys naturally occurring enzymes, consequently minimising the nutritional value. This is a perspective that raw fruit and vegetables is a diet best suited to improve your physical and mental wellbeing.

Joe was introduced to plant based diets around six years ago. After a couple of years, he took the leap into experimenting with a completely raw diet. “When my friend explained it to me, I was like in my head ‘I’m never doing this, that’s crazy’,” he said.

“Before going plant based I was just like everyone else, I was having energy drinks all day, processed foods and stuff and it was great. I was 20 and whatnot.”

After a period of experimentation, Joe felt like there might be physical benefits of going raw: “I kind of just experimented you know like 30 days all raw, maybe just to cook dinner. It’s shifted a lot over the years, when I got into it I was very much in like high carb low fat style was called like the 80-10-10 diet.”

One concern with veganism is the mass volume of food you may have to eat in order to feel full or healthy: “I wasn’t eating enough, calorie wise. I would literally have my biggest mixing bowl full of salad. Finish it and be like, I could eat, something’s not right,” says Joe, but he advices that being creative with your meals, and listening to what your body is telling you if you’re still hungry is important. 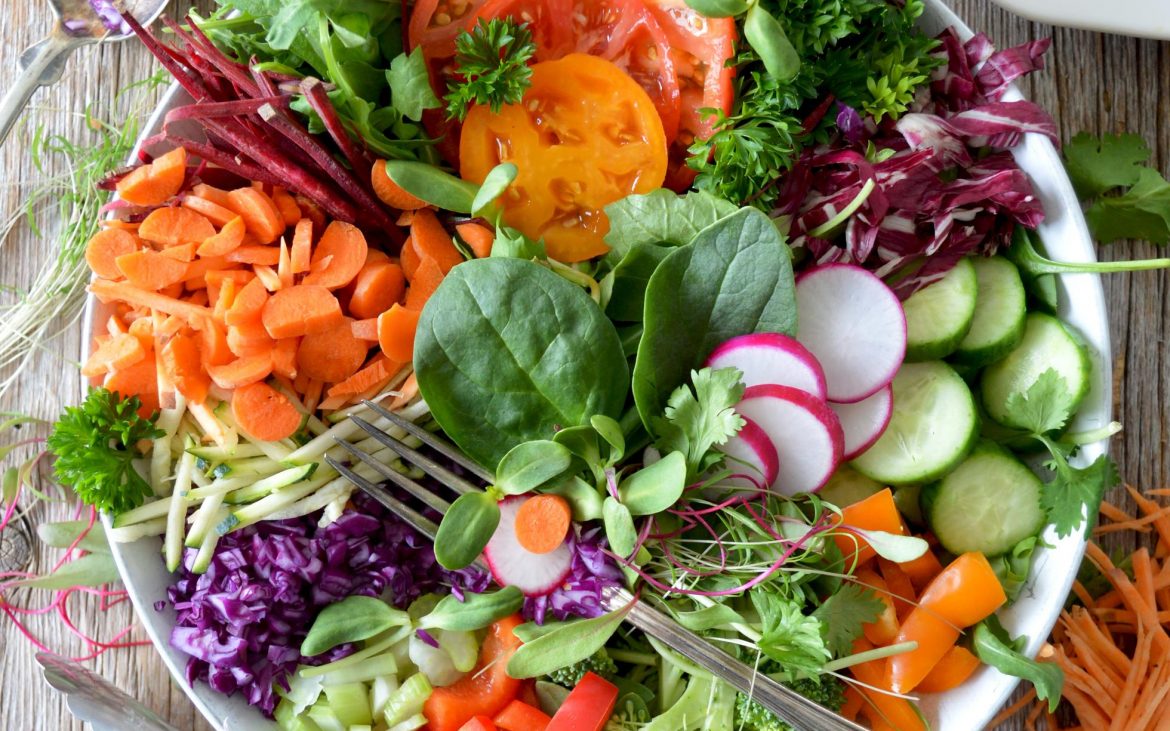 Ethics were a big factor in Joe’s decision to go plant-based, not agreeing with food regulatory standards in his country, and wanting to distance himself from companies which he didn’t agree with morally.

“In America we allow all kinds of chemicals that other countries don’t, and somehow we’re kind of lagging behind in some ways. I think I saw it as ‘that’s a food system I literally just want to step out of.”

He says it was a way “to divest from the companies that I think are not doing good, and oftentimes not doing good ignorantly,” so that he can in turn, redirect that money to organic farmers.

Whilst it is a positive step, veganism has been accused of being elitist. There is a privilege in being able to afford buying a substantial amount of fruit and vegetables sourced locally, as it just isn’t financially or practically a sustainable way of living, for some.

Whilst Joe recognises this, he says that our ideas of what plant based is, may be perceived to be unattainable because of how it’s marketed.

“The class side of it, I see that, but I see it more in the trendy elements of veganism, whereas there’s a lot of cultures that are very heavily plant-based, not because they’re trying to be hip, but just that’s just the way it is.”

Social media, whilst furthering the message, may also have hindered its progress in some ways. “It creates this unrealistic world as we see in a lot of ways on social media from from beauty to whatever it is but I just think like veganism is sort of falling into those trends in a way and it’s unfortunate because it’s just a simple thing,” Joe said.

“I think veganism in general shouldn’t be so daunting and that’s what I see, I like seeing the word ‘plant based’ come in a lot more, because it’s not so restrictive, you know, the ‘V’ word can be intimidating.”

In terms of advice for someone interested in trying this lifestyle, he said: “I would just always listen to yourself above any other voices, you know if someone’s telling you to do this thing for seven days and you’re on day five you’re like, ‘I feel unwell’, mix it up.”

“As for raw meat, eh, it hasn’t piqued my interest enough to try it.”

Featured image from Raw Meat Is All I Eat, via Youtube.
Edited by Sophie Victoria Brown and Natalia Zmarzlik.