Queueing up in the drizzle like rain, eagerly waiting for the security staff to open the doors into a night you’ll never forget. Waiting for the lights to go out, sheer excitement would fill the air, and that of the deep-rooted smell of extortionately London priced alcohol.

Once a known reality but now just a mere distant memory lingering in the back of our minds and our camera rolls.

The music and live events industry have taken a huge hit since Covid-19 found itself upon our shores, catapulting us into lockdown in March, with venue doors being firmly shut since then.

Music is so intrinsically embedded in our lives. Covid-19 has paused the soundtrack to our lives, and with that, the livelihoods of those in the live events sector have been stopped.

Redundancy has struck the nation but mainly in those in the live events sector, with a predicted 170,000 skilled workers to lose their jobs. 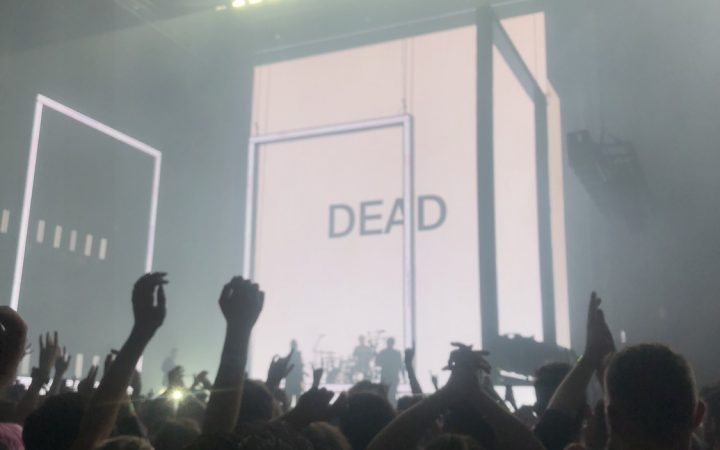 1975 concert at the O2 arena February 2020, a month before lockdown [Photography by Layla Nicholson]

Going to a gig, people worship those who perform on stage but often forget about those who make the performance happen in the first place. From sound techs to the marketing team, the gigs we attend rely on those behind the scenes.

I used to work handing out flyers for gigs at the O2 Academies; the rush and vigour of the venue on the event night cannot be encapsulated on a screen but only in person. Although I played a small part in the event, the thrill of being involved is unmatchable.

Stuart Dew, Tour manager and Guitar Tech, has worked in the industry for eight years. He has now seen the fast-paced industry come to a halt with having to stop touring: “I was in rehearsals for a Russian tour with Nothing But Thieves and was due to leave on the Friday when we got locked down on the Wednesday,” he recalled.

“Soon after that, all my clients started either cancelling shows and/or tours and pushing them back into 2021. Touring is my bread and butter, so when that was cancelled, I had to shift my focus to a more public-facing guitar repairs.”

[pullquote align=”right”]“Smaller venues were expected to fend for themselves”[/pullquote]The culture secretary, Oliver Dowden, said: “A £1.57bn emergency support package to help protect the future of theatres, galleries and museums will not be enough to save every job,” adding that “grants and loans would aim to preserve ‘crown jewels’ in the arts sector.”

The government seemed to have thrown a lifeline to well-established theatres and venues, but grittier local venues have been left to suffocate.

“The majority of the arts funding went to museums, which usually has public money to support them anyway, and the smaller venues were expected to fend for themselves,” Stuart said.

With an industry worth £29bn (excluding sport) claimed by British Visits and Events Partnership, so little has been funded for the industry and those who work in it.

[pullquote align=”right”]“Some of the world’s best-known techs are currently in jobs like delivery driving for supermarkets”[/pullquote]The government has pushed those who work in the music and live events industry to retrain, as their profession is deemed unnecessary. Everyone’s favourite ballerina of 2020, Fatima, confirmed this.

“It feels like we are being told we are unviable, constantly and to retrain. Some of the world’s best-known techs are currently in jobs like delivery driving for supermarkets, which is heartbreaking. We as events crew are first in, last out, and with this government’s response it feels like we are first out, last in, in terms of support for the crew.”

Steve Webster, a live events veteran, having worked 33 years in the industry, has now been hit with redundancy due to the Covid-19 pandemic. Webster, the marketing manager for the O2 Academies in London, has seen the industry he loves so dearly been bulldozed by the pandemic and the government’s response to it.

“My career has been directly affected by the pandemic; I was recently made redundant. And with the entire industry being hung out to dry by the UK government, there is no quick fix. I can’t simply find another job within this industry because, at this point, the industry doesn’t exist.”

With a lifetime of experience in the industry that undeniably sparks a lot of passion for those who work in it, the fact that it currently ceases to exist should come as a huge blow to society.

“I simply do not know or understand why the government has not assisted the live music/entertainment industry. Instead, they seem to be ignoring the plight of hundreds of thousands of people who have had no source of income or help at all. Their answer, our roles are ‘not viable’ and that we should retrain” 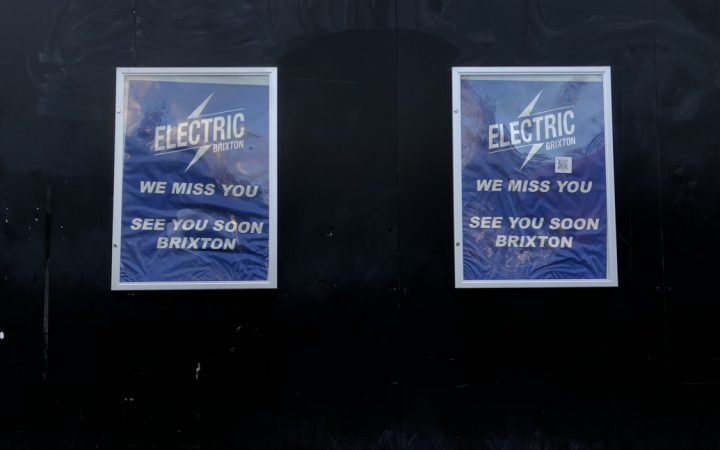 Daisy Parker, student and once part of the O2’s street team handing out flyers to those attending gigs, has seen how the government’s lack of funding and support has affected those in the live events sector.

“Everything is rubbish for everyone in the industry right now, but people behind the scenes do not get enough credit and are definitely affected the most. I see how hard these people work before, during and after gigs and if you could see the state that the crowds can be in, you’d see how difficult that job is”

Daisy sees the importance of those behind the scenes: “They make shows happen, and the fact they’re so painfully neglected is truly telling on how unappreciated these people are on the average working day.”

The relationships with work colleagues has also dwindled, the luxury of Zoom doesn’t apply or exist for those who worked in the live events industry “I miss my boss; he’s truly lovely, and it’s heartbreaking to know he now has no job, due to our neglectful government. PS Fuck Boris.”

Still, heading deeper into 2021 after the worst year for people across the country, there is a matter of uncertainty for the live events sector and those who work in it.

Having worked on the Tour de France in 2014 and All Points East festival in 2018, Steve Reynolds had his calendar wiped, much like most of those in the live events industry.

Reynolds, who’s an operations director, created The Survival Tour, a bike ride around the country raising awareness for the lack of support the government has given the live events industry. He’s also raising money for BackUp, a charity to help employees, freelancers whose careers have been halted by the pandemic. 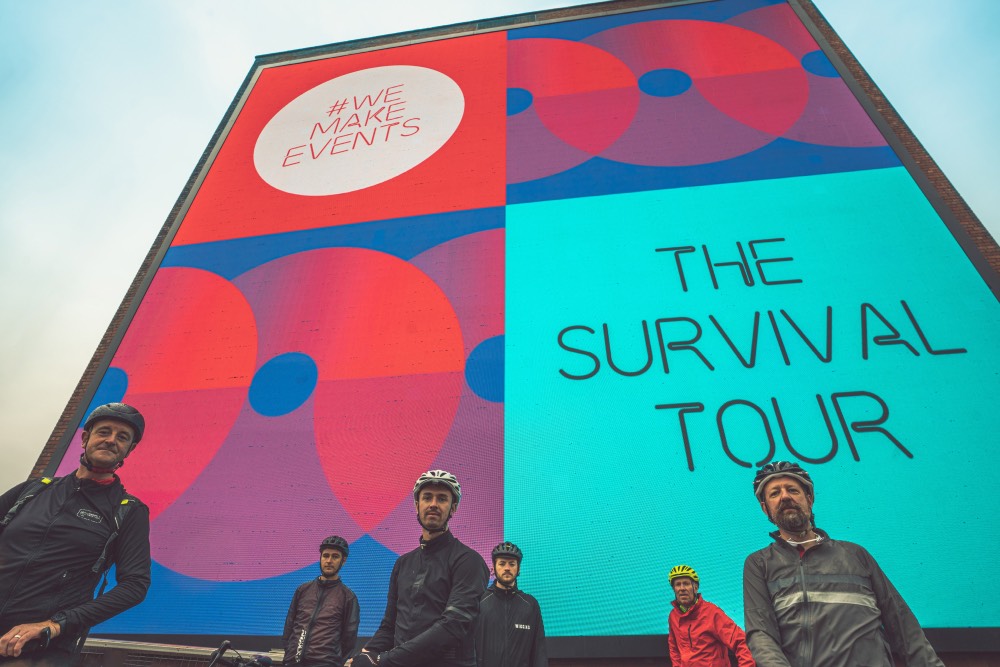 The team consisting of Harry Ford, Tyler Cole-Holmes, Mark Ward, Steve Reynolds and Mike Trasmundi set out across the country on bikes stopping at 138 venues covering 1,700km, roughly following a path that the tour season would follow.

“What we wanted to highlight was the number of people this is impacting, as we mutually agreed that the real impact wasn’t clear. By getting into regional theatres, grass root gig venues, arenas and even stadiums, we got the chance to speak to the individuals and hear first-hand the devastating impact this has had across the UK.”

Although some artists had the privilege of being able to perform online, those behind the scenes do not have this privilege. 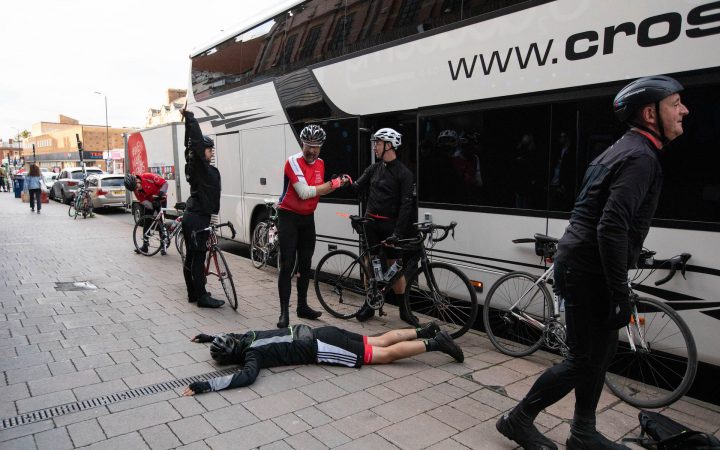 “For all of us, we watched our 2020 touring, festival, and live events calendars disappear at the end of March. Since then, we’ve not worked on any live shows. And despite some of our artists exploring the world of digital concerts, the year has been extremely damaging for the whole of our industry.”

So far, the team has raised awareness and £30,000 in funds to help people and their families for the charity BackUp.

From those like Daisy and myself handing out flyers to those who play a pivotal part in the event like Steve, Stuart and those on The Survival Tour, watching the industry you breathe for, being snuffed out is difficult to watch.

By Taysan Ali-Osman
5 Mins read
Child surgery is difficult for everybody involved, however there is a drastic delay in the wait time for children at this current time. This article Hearst from those waiting and those operating.
EntertainmentVideo

By Yanchao Gao
1 Mins read
We meet the faces behind the bar as they share their views and experiences on bartending and cocktail culture from the experts.