On February 18, 2021, drill rapper and musician Digga D, from north-west London, was stopped twice in one day while driving his luxury car in the capital.

Once in the morning and again in the evening. Both times he broadcast live using his Instagram account, recording his interactions with the police, who stopped him claiming he had run through a red light, and then going on to search as they felt it necessary.

During the second stop, Digga could be heard frustratingly telling the police officer: “I’ve been stopped like five times this week”. The officer replied to the rapper, explaining that it was standard practice and they finished searching the car he was free to go.

The officer also mentioned he just had to make sure that the car “actually belonged to the rapper” as it was not insured under “an African name”. The car was insured under the rapper’s official birth name, Rhys Herbert.

However, during the first stop and search, the officer had stopped Digga for a similar reason and had told the rapper that he would “put a note on the police’s system for other officers to not stop my car for the same reason he had done.” 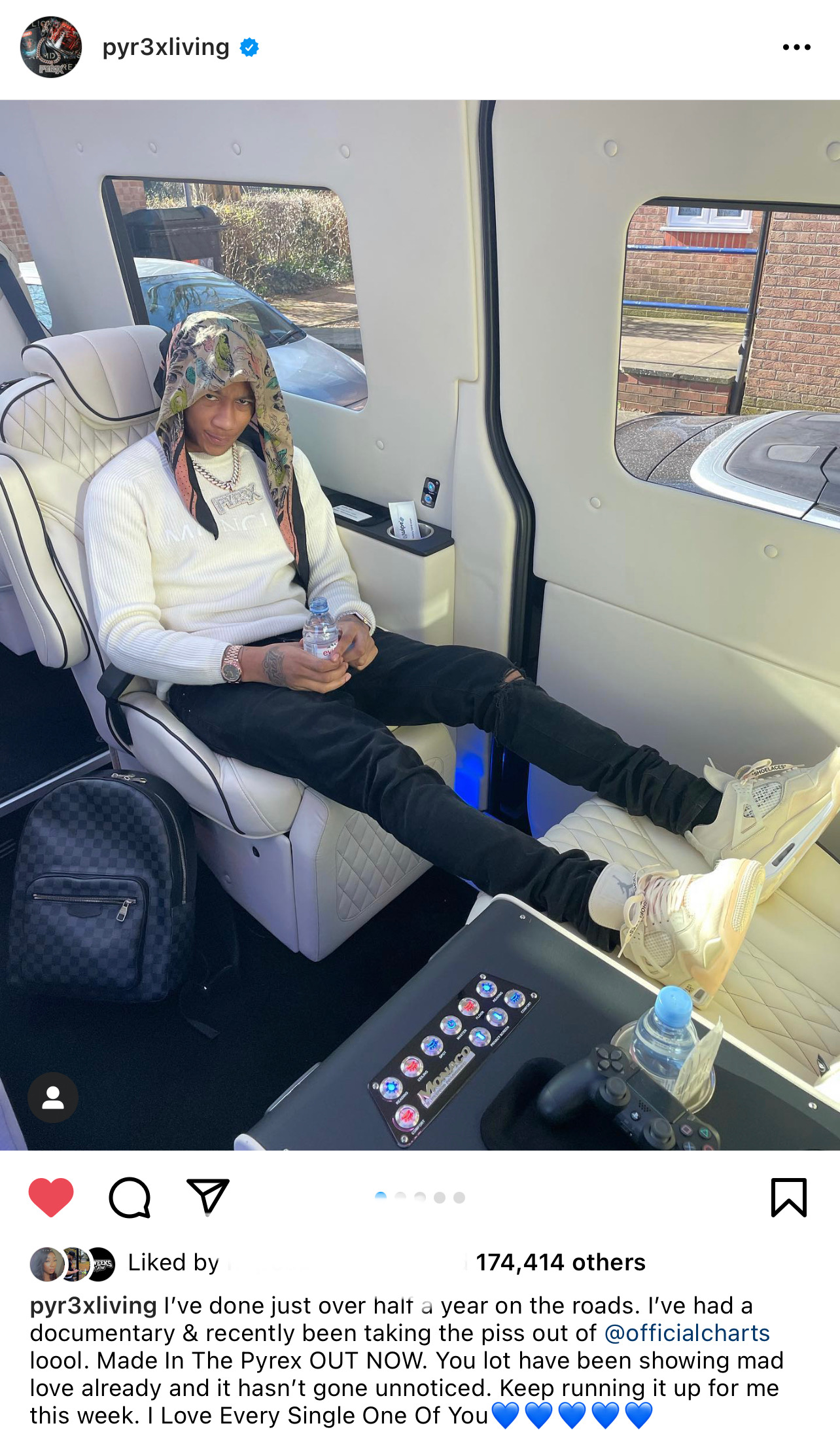 He continued to stream live from his Instagram after being searched for the second time that day. Digga explained to his viewers that he constantly feels like he is “being targeted” by the police and they won’t seem to “leave me alone”.

The law that they used to search the rapper’s car was the Police and Criminal Evidence Act 1984, which gives the police the power to search people or their vehicle if they feel the person is carrying drugs, a weapon, stolen property, or something that could be used to commit a crime.

The policing powers were implemented with the intent of “protecting the public, tackling crime and keeping our streets safe,” according to the Metropolitan police’s official website. The website also claimed that from feedback given by the public who were asked about how they felt about stop and searches being carried out, “83% agree that we should use the power and 78% are confident in our fair use of it.”

However, to say that police power is being used in a “fair” manner by some could be considered laughable.

The Met Police website advises that anyone who has felt victimised for any reason by the police officers who carried out the stop and search to file a report. 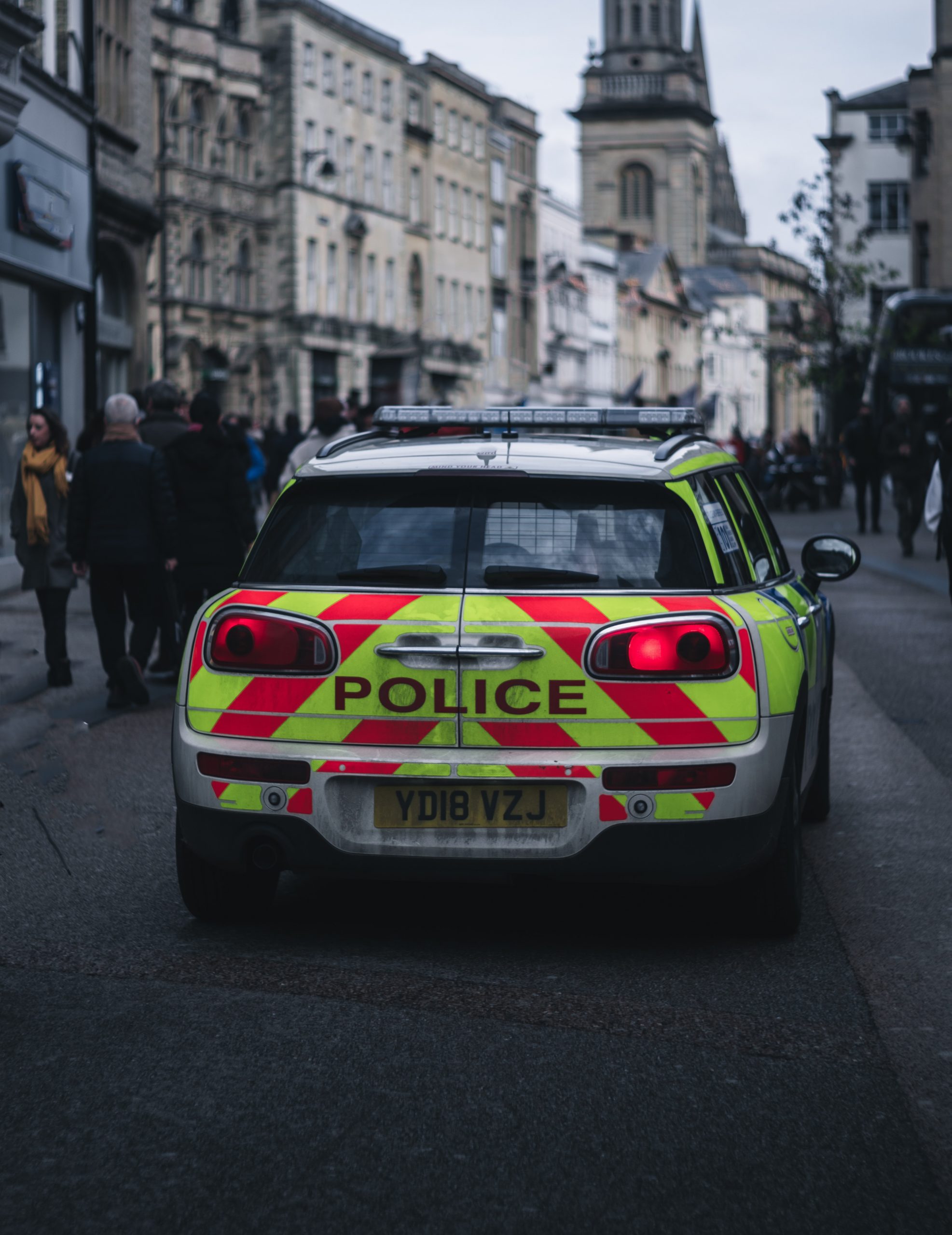 Only 22 complaints against the Metropolitan Police were investigated [Unsplash: James Eades]

On March 1, 2020, the Mirror published details from an investigation they carried out, showing figures of the amount of racially motivated misconduct complaints made against different police forces across England and Wales between 2015-2020.

The Met police received 1,368 complaints; this was the highest number received by any force named in the investigation. West Yorkshire, who had the second-most complaints had less than half in comparison to the Met, with 447 racially motivated misconduct complaints received.

The police watchdog, Her Majesty’s Inspectorate of Constabulary published a report on February 26 that discussed the disproportionate use of stop and search powers by the police in England Wales, reflecting on the legislation 35 years after it was first introduced.

The report admitted that a black person in contrast to a white person was nine times more likely to be stopped by the police.

BlackLivesMatter UK used their Twitter account to share their feelings regarding the report published by HMIC. Their first response was in reaction to Sky News’s tweet: “Police are still unable to explain why their powers are disproportionately used on people from black, Asian and minority ethnic backgrounds”.

The tweet also had an article attached to it. The social justice group decided to respond with a humorous tweet that read, “Hint: The word they are looking for begins with an R and ends with M,” referring to the word ‘racism’.

The account then released multiple slides of information with the intention of informing their followers of what “institutional racism” is and a list of ideas that the organisation believed would help decrease this form of racism within the criminal justice system and methods used by the police.

Two examples being, “an end to the gang databases, gang injunctions and joint enterprise doctrine” and “immediate dismissal of any police officer who is discriminatory, corrupt or uses excessive force.”

Sir William McPherson, who looked specifically at the actions of the Met Police within an isolated incident, also concluded that they were “institutionally racist,” when he wrote the 350-page McPherson report 22 years ago.

The report questioned the police’s actions and called out the Met Police for their handling of the investigation. It was published by the retired judge who wrote the report after the completion of the inquiry into the murder of Stephen Lawrence in 1993, a young black man who was killed in Eltham by a gang of white males who racially attacked him while he was waiting for a bus with a friend.

Within this report, McPherson described the handing of the Stephen Lawrence case as, “marred by a combination of professional incompetence, institutional racism and a failure of leadership” and he went on to criticise not only the entire force but specific officers when necessary. 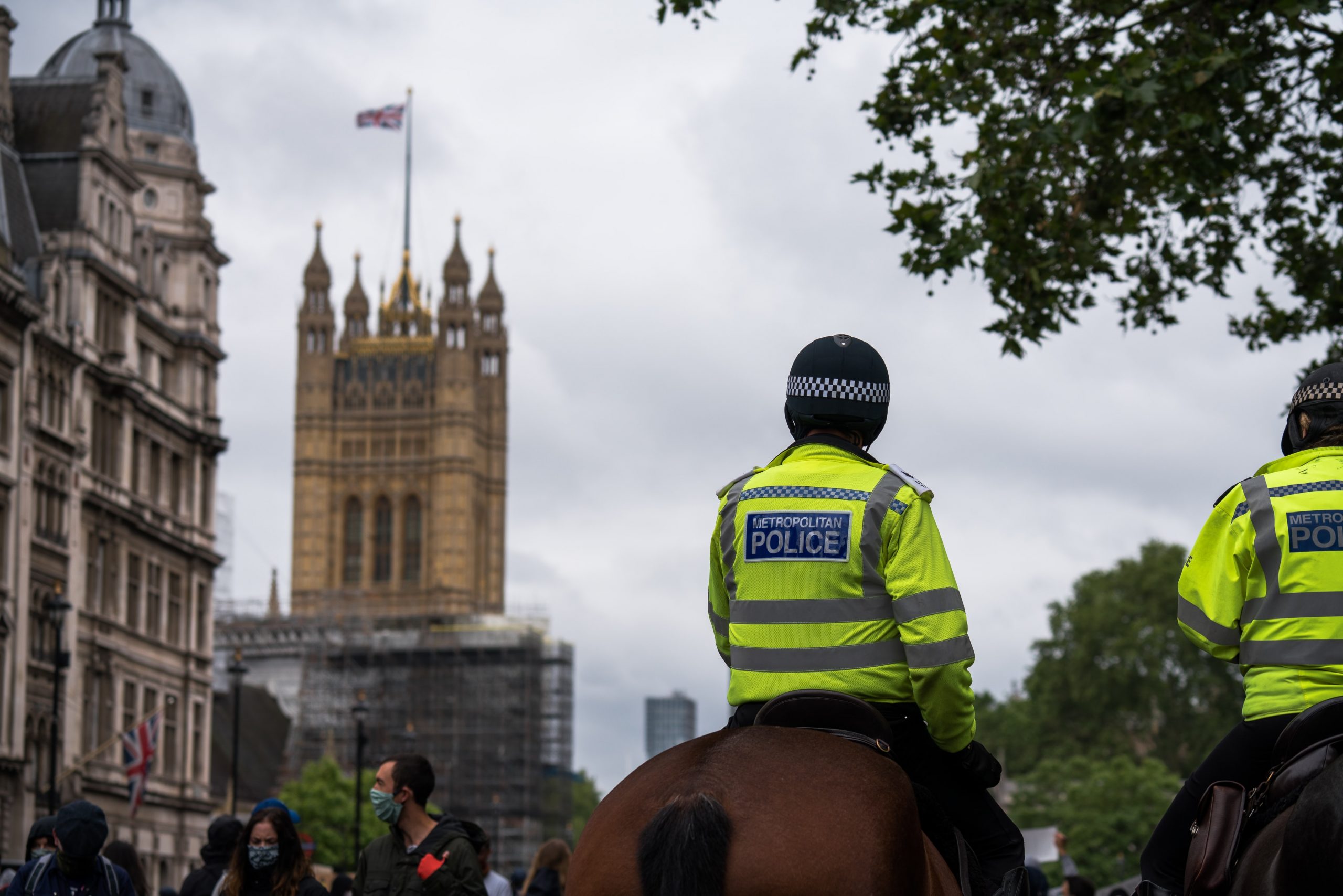 The McPherson report was highly critical of the Metropolitan Police. [Unsplash: James Eades]

In the report, McPherson listed 70 recommendations that he believed would benefit society, creating a “zero tolerance” attitude towards racism. Some of the proposals were implemented while others were not. One of these recommendations being the diversifying of police units as there were very few ethnic minority officers.

This raises questions why there still so few officers from ethnic minority backgrounds, so Artefact spoke to a former black police officer who quit the force in 2018 under the condition his identity remained anonymous. We will refer to him as Kenneth.

Speaking of his treatment by the public, Kenneth said he was “hounded by the public at first, I remember someone shouting at me ‘fucking pig’ in the middle of Streatham High Road. I had a lot of people asking me why as a black man I had chosen to become a police officer.”

He went on to explain how the more he worked in the community, citizens of the area bothered him less, as “they were familiar with me and knew that I was only there to do my job and treat them fairly.” 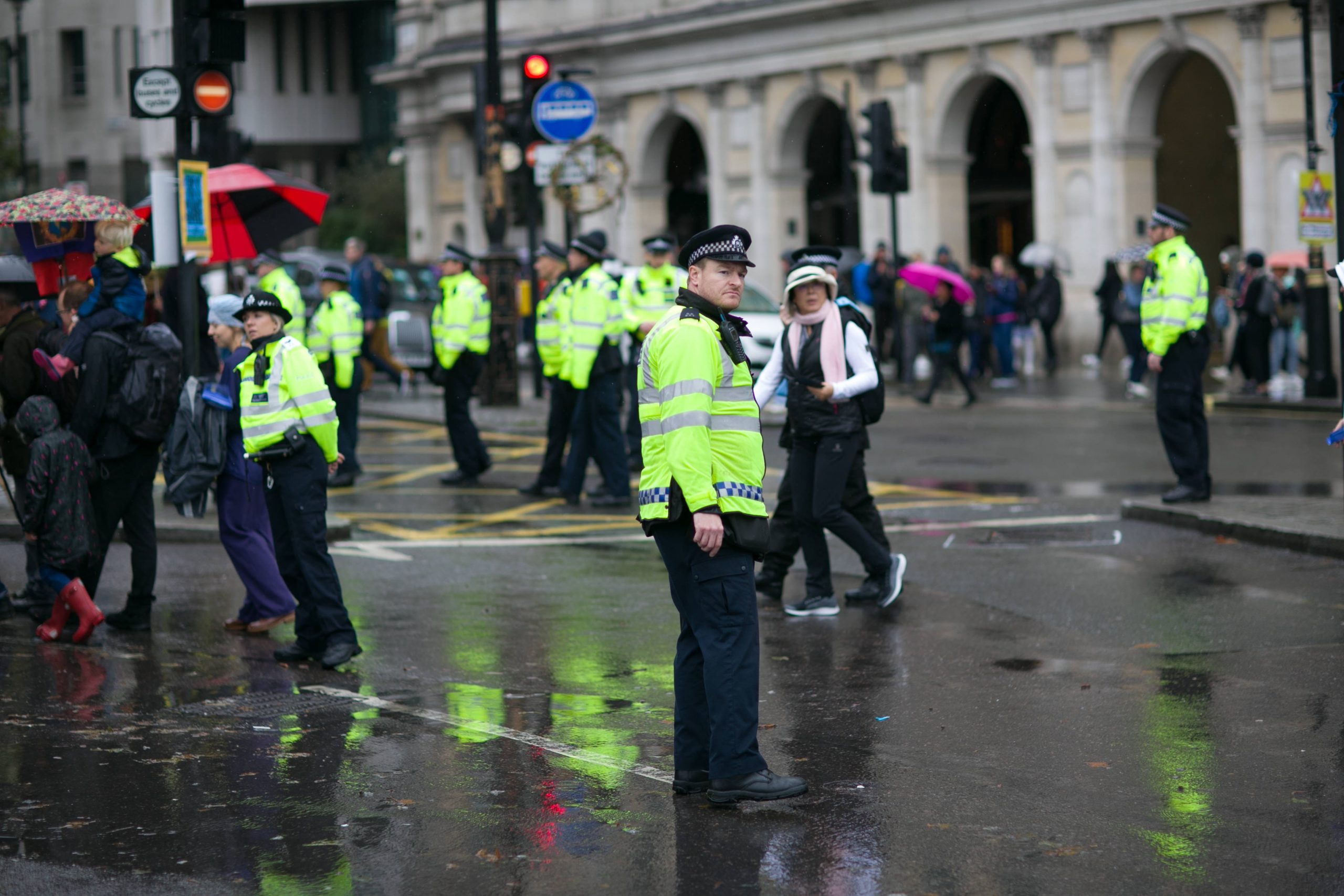 Treating the residents fairly was important to Kenneth because, as he tells me, “it wasn’t something that I had seen when I was younger.

“Whenever the police were mentioned as a kid it was always negative. My mum would threaten to go get the police when I was like seven if I was misbehaving, as a way of making me listen. I went from being afraid of them to being stopped and searched by them in my teens constantly. Because of the same old trope of I ‘fit the description’ of somebody who committed a crime. It strangely motivated me. I wanted to be the police officer I never knew. One that actually cared about the community and its people.”

Kenneth confessed that when he started the role, he believed that the hardest part would be the actual act of policing. He was shocked to find out, it was his co-workers that made the job unbearable.

He described his force as “an old-boy club, besides me, there were maybe two other people from an ethnic minority background. That was it. I felt like the three of us stuck out like a saw thumb when around the rest of the officers in our force.”

He recounted a story of going out for a drink with some of his co-workers after finishing his shift. “They invited me to the pub near our office and I accepted in good faith. We were talking and drinking, then someone thought it would be funny to make a racist joke about Asian people.”

“We would see a group of black boys walking together and a specific officer would point them out referring to them as ‘a gang of boys’.”

He said he didn’t remember the exact joke. “I was the only black or even person of colour at the table. I sat there and watched everyone laughing like it was OK. After a few minutes of sitting there awkwardly, I decided it was time for me to go home.

“Before, I had heard little micro-aggressions from officers while I would be on-shift with them. We would see a group of black boys walking together and a specific officer would point them out referring to them as a ‘gang of boys’ knowing the negative connotations of that phrase,” Kenneth told us.

“Or a teenage black boy walked past us going to a convenient store. The officer’s response to seeing him was ‘is it just me or did he look a bit suspicious’ I’d roll my eyes or pretend to ignore them.”

He told us how the micro-aggressions and blatantly racist comments he heard from his co-workers made him “resent the idea of even going into work.” This led to him leaving and pursuing a career away from the force. 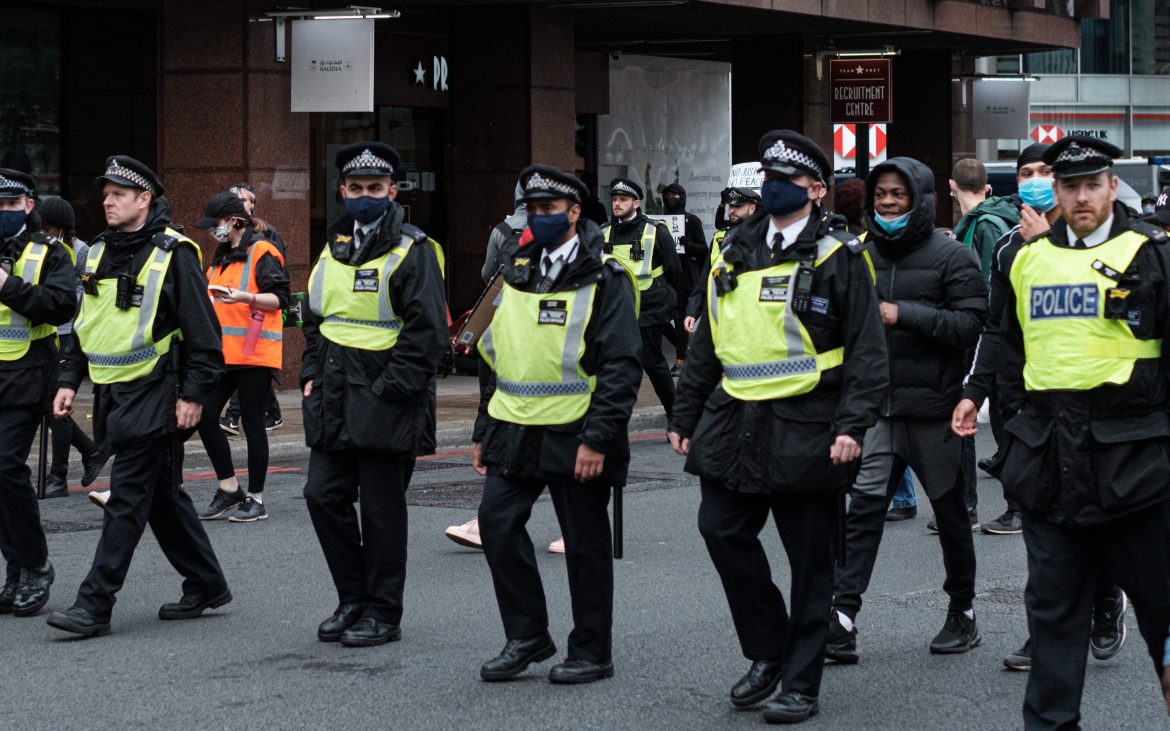 The police have been on the front line during the pandemic [Unsplash: Ehimetalor Akhere Unuabona]

This was not the only example of an officer who left the police force due to what he felt was racism among his fellow officers.

Charles Ehikioya, a former senior inspector is a more extreme example; he left his job as a police officer due to what he believes was racially motivated harassment from two other officers.

Ehikioya, filmed two white officers following him for two miles in Croydon, before stopping him and accusing the inspector of  “speeding and running a red light”.

The situation was made worse when Ehikioya realised that the two officers who claimed he was acting “unusual” worked within the same force as him.

Due to the former officer feeling as though he was racially profiled by the two white officers and after filling a complaint of racial harassment with Scotland Yard following the events of May 23, 2020. Ehikioya also decided to leave the force and is currently suing them.

Artefact has contacted the Metropolitan Police for comment on the issues raised in this article, but they have yet to respond.