Major new proposals in the government’s Police, Crime, Sentencing and Courts Bill (PCSCB) have been defeated by the House of Lords, after nationwide protests called for Parliament to “Kill the Bill”.

The most controversial parts of the bill, which sparked a coalition of protests all over the country, were measures to effectively ban protests.

These proposals were drafted in response to last year’s demonstrations by Extinction Rebellion and Insulate Britain during which activists blocked or glued themselves to roads.

Some ways in which the bill planned to restrict protests was to threaten organisers with up to one year in jail if they caused “serious disruption”, and up to 10 years in prison for those damaging memorials.

Boris Johnson’s cabinet also planned to increase police powers by giving them the authority to stop protests if they caused “public nuisance”, which included being too noisy, and allowing them to stop and search anyone at protests without reasonable suspicion. 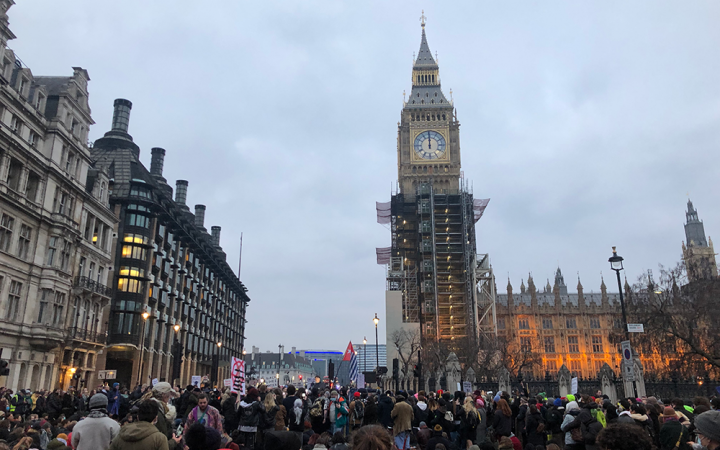 Previously, the police were required to prove that a public assembly resulted in “serious public disorder, serious damage to property or serious disruption to the life of the community” to restrict it.

“This Bill, in my view, represents the biggest threat to the right to dissent and non-violent protest in my lifetime. It’s deeply reactionary,” said former Labour cabinet minister Lord Hainsaid in the debate on Monday, January 17. “It’s an authoritarian attack on the fundamental liberties of our citizens.”

Members of the House of Lords also supported a proposal to repeal a 19th century law criminalising rough sleeping.

The government suffered a total of 14 defeats in a series of votes by Peers which went on late into Monday night, while the drumming by protesters outside Parliament could be clearly heard inside the chamber.

The protests on Monday were the continuation of around 27 #KillTheBill protests which were held across the UK on Saturday, January 15. 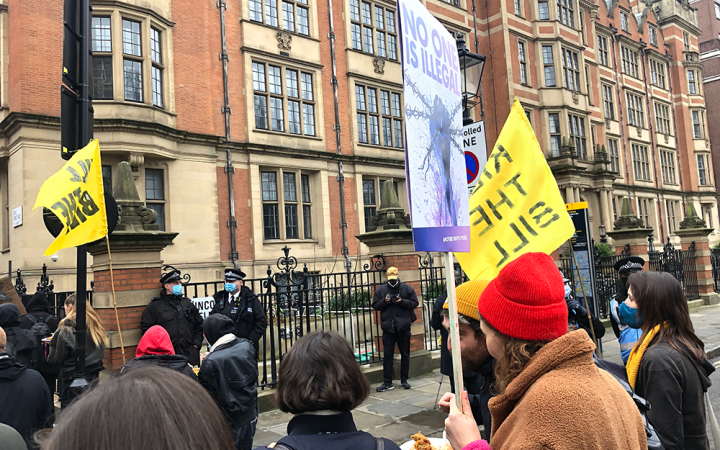 London’s #KillTheBill demonstration was organised with Global Justice UK, Another Europe Is Possible, Extinction Rebellion, Sisters Uncut to create a joint march against the Police, Crime, Sentencing and Courts Bill and the Nationality and Borders Bill. While protests against the latter have been organised since its introduction in July last year, this was the first visible national day of action opposing it through coalitions with other activists.

London protesters were joined by an array of organisations including Socialist Worker, Hackney Green Party, and various migrants and refugees rights groups; some of the marchers also nodded towards the history of protests by dressing up as suffragettes. 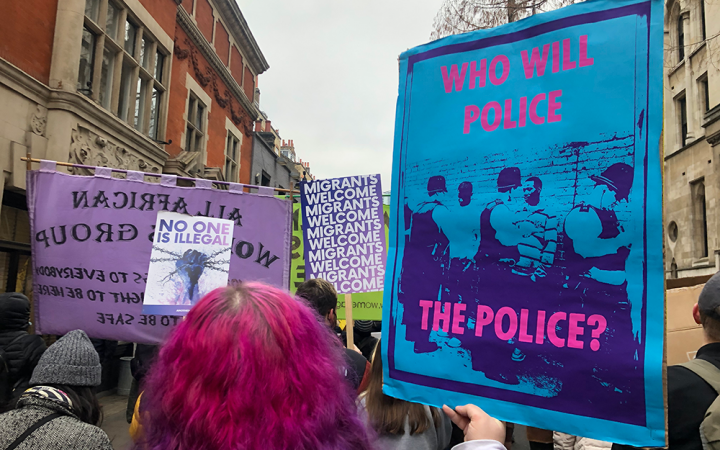 Other protesters arrived on site with placards showcasing photography of Gypsy, Romany and Traveller (GRT) communities, as the Nationality and Borders Bill seeks to criminalise individuals living in vehicles on land in England and Wales without the consent of the occupier. This threatens GRT communities with homelessness as they could have their vehicles seized, including facing a fine of nearly £3,000 or a prison sentence of up to three months. 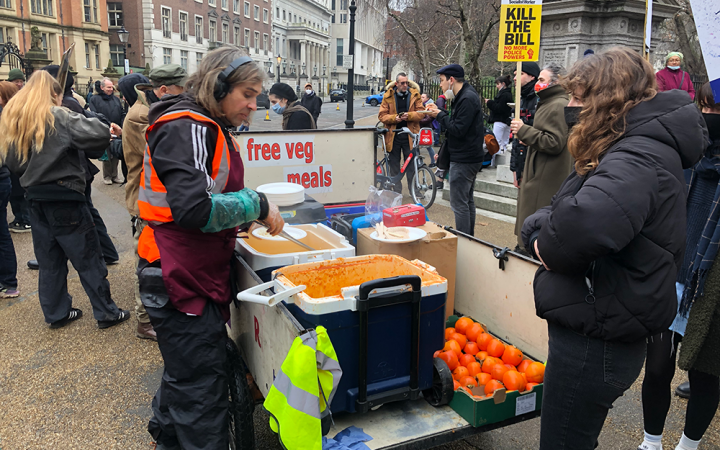 Activists marching for the rights of refugees and migrants also protested against the bill’s proposals to criminalise entry into the UK using “illegal methods”, such as refugees seeking entry by crossing the English Channel by boat, which could be penalised by up to four years in prison.

Black Lives Matter co-founder Marvina Newton spoke to the crowd gathered at Lincoln’s Inn Fields on Saturday, starting one of the protest’s leading chants of “Boris Johnson’s a wasteman”.

The following speaker Matt Thomas made references to the “public nuisance” phrasing in the policing bill, saying that “without annoying something, we don’t upset authority, we don’t get change done,” before taking out his harmonica because “it’s the most annoying thing” he owns.

Those unable to attend the march in person joined the demonstration’s ongoing digital action of letter-writing to ask crossbench members of the Lords the swing votes on the bills.

As the march culminated on Parliament Square, the crowd heard from the event’s final speakers, leading up to former Labour leader Jeremy Corbyn, who was met with football-like chants of his name when stepping on the podium: 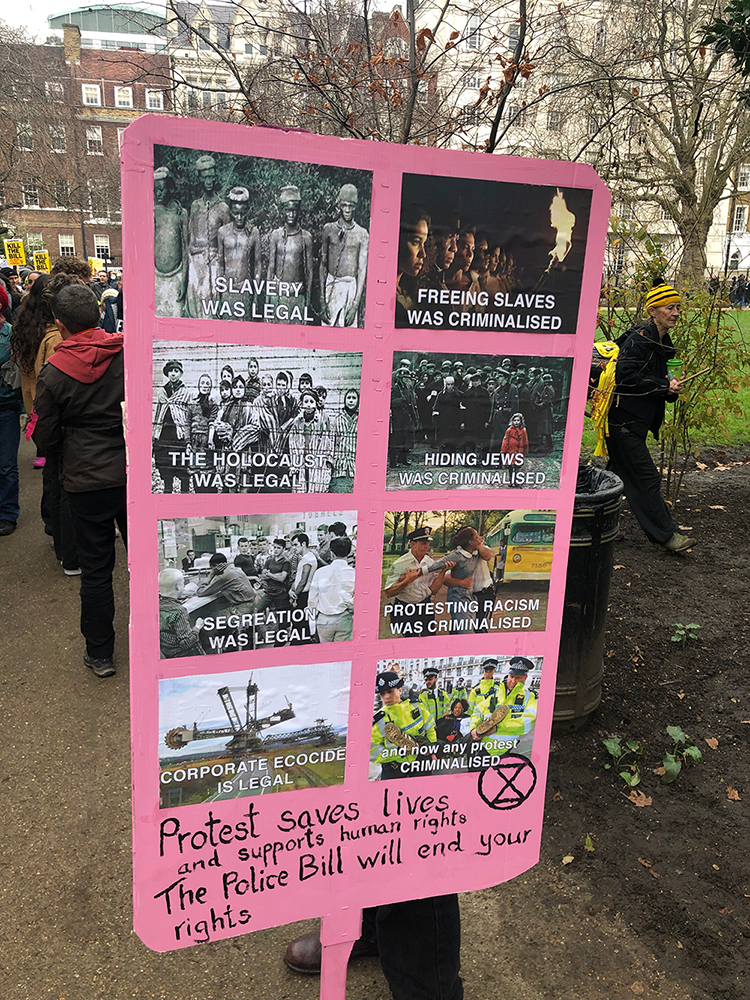 “Thank you all for being here today, and thank you to all those who have organised not just this event but so many others all around the country. And thank you to those who have organised events this morning in solidarity with those refugees who were stuck on the border between Belarus and Poland, dying in plain sight of the media, in plain sight of food and water they can’t get. Isn’t that the most disgusting view of how the world treats so many refugees with such inhumanity?”

He continued: “Don’t run away with the idea that just because you don’t agree with or don’t like somebody, that they’re actually stupid or doing something through ignorance. No they’re not – there is a whole agenda here and it’s an agenda about disempowering people, empowering authority and the state, and at the same time a massive redistribution of wealth and power in favour of the powerful and the wealthiest.”

The bill will now bounce between the Commons and Lords until both agree on the final amendments, also known as “Parliamentary ping-pong”, a process that will have to be completed before late March or early April when the current parliamentary session is set to end.