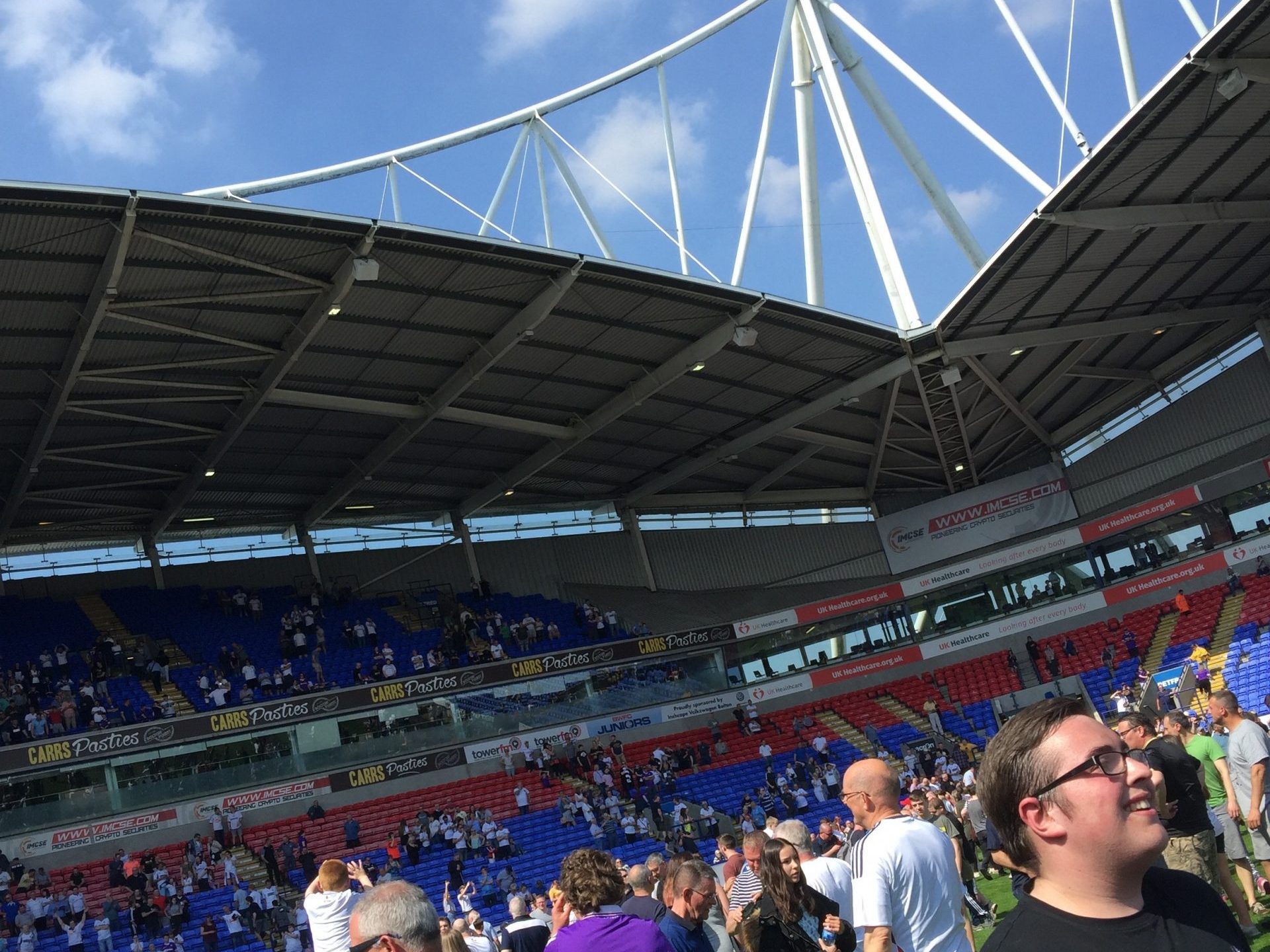 “You racist bastards, you know what you are” sang the so-called “hooligans” from the Bolton Wanderers end when their game against Morecambe earlier this year was stopped, recalls nineteen-year-old Elliot, who goes to Bolton’s home games every week.

Trouble brewing and pitch invasions are par for the course at every level of British football, but how far have we come since the days of raucous football hooliganism? With tragedies like the St Andrews Stadium disaster in 1985, the Heysel Stadium disaster of the same year, and the fallout of the infamous 1989 Hillsborough disaster still taking effect, there is still a degree of fear of history repeating itself.

Football hooliganism has always been fuelled by right-wing political activism. Leading the far-right charge in England since 2009, Tommy Robinson sends shivers down the spine of most left-leaning Brits, but it’s funny how this is the only name that seems to resonate far and wide as being the voice of far-right ideology. Robinson (originally Yaxley-Lennon), co-founder of the English Defence League (EDL), has made headlines since 2009, claiming: “I don’t care if I incite fear of Muslims.” and being banned from the likes of PayPal, Facebook, Instagram and YouTube after breaking hate speech policies, but since the EDL isn’t a group of football hooligans or casuals, the ideology has infiltrated the stands.

Inspired by both the EDL and football hooligan groups of the 70s and 80s that plagued many clubs, including Aston Villa and Millwall F.C, far-right breakaway groups have come in and out of fruition, whether tied to a particular football club or not. The year 2009 saw the formation of ‘Casuals United’, claiming to be “peacefully protesting against Islamic extremism and the far-left” nationally, but borne in response to protests against the British Army homecoming in Luton. Although there was originally a separation between Casuals United and the EDL, Joel Busher, Coventry University Research Fellow and author of The Making of Anti-Muslim Protest, tells me that there is not always “a clean distinction between” the groups, and that “Casuals United were very much […] a part of […] the birth of the English Defence League.”

2009 Casuals United was largely organised by Joe Marsh, leader of Cardiff City hooligan firm Soul Crew, and was reported to be “a peaceful movement representing ordinary working people angered by the sight of Muslims hurling insults at British soldiers on homecoming parades” on its inception in 2009. Although the group had its roots in Luton, it was evident that there were branches of Casuals United throughout predominantly the south of the UK, including Bristol and Walthamstow. The ‘firm’, to use the hooligan lingo, were intrinsically linked to nationalism and would take any opportunity to offer unwavering support towards the armed forces, behaviour that we also see from a minority of fans whenever England plays.

“It affected and infected football fans.”

Far-right extremism was never contained in the South, though. In fact, ‘09 saw the people of Bolton, Greater Manchester, flock to EDL marches in the town and it seemed that home football club Bolton Wanderers was not exempt from violence. Bolton News reported that a friendly match between Bolton and Hibs (Hibernian FC from Leith) resulted in smashed up shops and beaten-up fans. Whichever side this could be attributed to didn’t really matter, because football hooliganism isn’t about the football—that’s just where it starts; as author Phil Thorton wrote in his book Casuals, “It affected and infected football fans.”

This is not to imply anything about these particular places; these minorities were a symptom of a larger cultural problem. On Casuals United, and indeed the EDL, Busher told me, “They happen to connect up with this international so-called ‘counter-Jihad’ movement.” The unfortunate events from 2009 seem all but eradicated today, but is there something we don’t seem to understand about the toxicity of the stands? I asked Bolton Wanderers fans their opinions about hooliganism today at the club, in order to understand the lasting impact of the historical violence surrounding football.

“Bolton is as bad as the next club, every club has some idiots,” says Elliot. Perhaps optimistically, he continues, “I don’t think it ruins it for everyone, it’s just a few mates who are trying to impress each other by doing stupid things.”

This seems to be a running theme amongst fans, as Bolton supporter Alex says, “Despite incidents this season, in reality it’s no worse than clubs with the same or more fans in the UK,” adding that he has very often witnessed pushing and shoving resulting in run-ins with the police, but that anything more presented in the media is just a “fantasy in modern football.”

He continues: “[far-right ideology] has to be resisted and, more often than not, is and always has been kept off the terraces of English football by fans that stand for equality.” Perhaps then we are in a new wave of football fandom, where the liberal youth refuse to stand by and accept the type of hooliganism embodied by the likes of Casuals United in 2009. In 2012, the English Football Association published a summary of measures to prevent football violence, corroborating this idea: “Supporter violence inside stadiums is very rare. Some confrontations between supporters do occasionally take place, but on a very limited scale and usually some way away from the stadium environment.”

According to fans, a distinction has to be drawn between hooligans and football fans who just so happen to have right-wing beliefs, hooliganism being a lifestyle rather than a hobby. As a recent example, racist abuse thrown at the three black England internationals that missed penalties after the final of Euro 2020, Saka, Sancho, and Rashford, was referred to as hooliganism. Elliot and Alex disagree, describing the perpetrators as “actual racist keyboard warriors” and expressing disgust at the abuse, but would not “class that as hooliganism,” respectively.

Even the football wing of the EDL makes this distinction: “There were a couple of demonstrations where things became violent and they blamed that on hooligan elements, or those sorts of things […] and tensions emerged a bit around that, some of the people who had been involved involved with Casuals felt like they were being scapegoated for something […] and they felt like they were the ones that started it in the first place,” says Busher.

In fact, football fans are actively going against the trope. According to Alex, there are “A […] number of counter movements […] throughout UK football fan culture and in European football.” Busher agrees with this sentiment in general, mentioning “anti-fascist groups” and “counter-mobilisation” in response to EDL and far-right activity that spurred on football hooligans, especially in 2009. In addition to changing attitudes within the terraces through open conversations and social media movements, organisations such as Show Racism the Red Card have been putting out the good word for years and continue to organise talks, provide opportunities for young people, and educate supporters, well beyond the football ground.

In 2014, the then-Minister for Policing and Criminal Justice, Damian Green, addressed the House of Commons, stating: “Although levels of football disorder have been significantly reduced, and orchestrated football violence marginalised, the risk of spontaneous alcohol-fuelled incidents […] remains.” Going further to differentiate between hooligan behaviour and drunken behaviour is something contemporary football fans are keen to push forward.

“Football has been, and will be in the future, a battleground for politics”

Alex admits that, as a frequent football-goer of every home game and many away, “The pub before or after is included” and is as much a social event as entertainment. And this tends to be where the difference should be drawn. “Football has been, and will be in the future, a battleground for politics as it’s one of the main cultural activities for working class people,” he continues. Yet another way to demonise the working class.

From the fans’ perspective, it would seem that the term ‘hooligan’ has become a token in society, especially outside the world of football, and is all too easy to throw around as soon as things kick off. The days of Casuals United and the EDL (although still active) in their 2009 heyday are all but gone, replaced by a culturally awakened, yet still-passionate crowd. Indeed, Busher told me that “the relationships between Casuals United people and the EDL grew quite strained […] [due to] a combination of egos” and “resentment” for Tommy Robinson getting famous, suggesting that the link between the groups was short-lived.

On a final note, Alex rounds up, “The media and papers are all too keen to sensationalise this and tarnish football fans with racist and thug brush, where in reality the majority of football fans want to just support their team and that’s about it.”