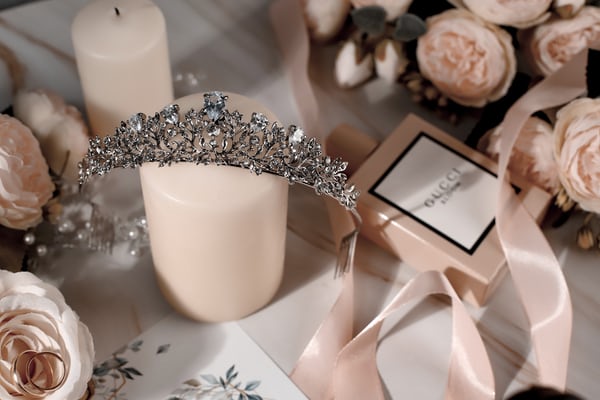 Picture this: it’s the year 2000. Juicy Couture’s velour tracksuits are ever-present. Bubblegum pink, baguette bags, and bedazzled logos are all the rage. But when I think of the turn of the 20th century, chick flicks spring to mind. Mean Girls’ Regina George rules the school like a dictator in a pleated, pink mini skirt. And Gossip Girl’s Blair Waldorf is sitting on the MET steps in a plaid pinafore dress and Peter Pan collar, preaching: “If you really want something, you don’t stop for anyone or anything until you get it.”

Unapologetically feminine and villainous women dominated pop culture at the time. Lots of us loved to hate them. But if I’m being honest, I secretly wanted to be them. To me, they exhibited that femininity and ambition were not mutually exclusive, and it felt vaguely empowering. A girl could wear pink and curl her hair, but not identify with a traditional, more nurturing view of womanhood. For many others though, it was the exact opposite.

It was drilled into us; to be an ambitious woman is to be a villain.

“The mean girl trope,” says student filmmaker Autumn Hall, “is the pattern we see of young women, particularly in early 2000s films, who are very feminine and driven but are always the antagonist.” Autumn goes on to say that while these characters are indeed rude or even cruel to the often mousy, girl-next-door protagonist, their otherwise positive qualities are veiled beneath the idea that their only defining traits are being frivolous and evil. It was drilled into us; to be an ambitious woman is to be a villain.

Autumn tells me about High School Musical’s Sharpay Evans with her legendary pink locker, a tiara perched atop her blonde curls, and an undying dedication to starring in her high school’s musical theatre production. “Sharpay knows exactly what she wants in life and is willing to do anything to get that,” she says. “In theory, these are not bad traits, especially when exhibited by men. But in the films, Sharpay’s sole purpose is to antagonize Gabriella and be the mean girl of the story.”

“Mean girls have inspired my ability to truly not care about what others think.”

Perhaps this is why some view the Mean Girl trope as having empowered women: it gave them permission to act assertively, like men. Gossip Girl’s “Queen B” protagonist, Blair Waldorf, is one example of this. She is vindictive, vain, and spoiled, but above all, ambitious and self-assured. “Blair is the most hard-working character throughout the show. From the very beginning, she knows what she wants, she has a plan and she is willing to do whatever it takes,” says blogger Mekayla Butler, on why she actually “loves” the trope. “Seeing [a character like Blair] be so headstrong, confident, and determined was always just so cool to me,” she continues. “Mean girls have inspired my ability to truly not care about what others think.”

For others, though, the trope seemed to assert that female ambition is the antithesis to kindness. Autumn felt this impact personally. “I was afraid to express my own interests and femininity growing up,” she recalls. “I never allowed myself to enjoy girly clothes,” she continues, telling me she didn’t want to be seen as remotely similar to characters like Sharpay. The only examples of strong women she saw in film were mean-spirited. And so to Autumn, those qualities felt mutually exclusive. “Ultimately, low-profile women like Gabriella” –the approachable, unassuming love interest for the male protagonist– “were the ideal.”

Luna Gosling, an MA student with a passion for film analysis has their own memories of the mean girl trope.

“Growing up I saw this trope everywhere and the thing that stuck with me the most was how meanness was so deeply associated with femininity,” Luna says. “Attractiveness and male attention were also associated with characters like Regina George and Sharpay. Those are desirable qualities. So in secondary school, I found myself judging more feminine girls because I assumed they were mean. And ultimately, it made me feel better to think that they were.”

But, Luna believes these one-dimensional depictions of young women are certainly changing. One of Netflix’s most popular original films, teenage romantic comedy “To All the Boys I’ve Loved Before” came to mind. The film’s synopsis is as follows: “When her secret love letters somehow get mailed to each of her five crushes, Lara Jean finds her quiet high school existence turned upside down.” Her classmate Genevieve is one of the most popular girls at the high school and is indeed a mean girl. But Luna identifies, “There’s no imbalance in the femininity of these two girls.” Lara Jean wears pink cardigans and bows in her hair. And she enjoys activities like scrapbooking and baking. “She is both kind and unapologetically feminine,” says Luna. What makes ‘To All the Boys’ different from the films Luna grew up with is how the antagonist is no more feminine than the characters viewers are supposed to love.

“Obviously someone’s gender expression is not an indicator of their character,” Luna finishes. They hope that films for young, impressionable audiences will take after “To All the Boys I’ve Loved Before” and subvert the mean girl trope for good.