As part of the awards process, Rodriguez Cambana has been in residency at the gallery for four months, reopening the exhibition space in response to sites of migration – Ópera de Balcón is the artist’s most ambitious project to date.

The whole exhibition reflects on the physical spaces that act as intimate communicators between black and indigenous communities in surreal migration experiences and compares them to the mystical play and performative gestures of changing environments.

Through his own life experiences, Rodriguez Cambana reflects and participates in his community. To shatter the illusion of equality, Ópera de Balcón introduces the material reality of class and operates at the intersection of “public” and “private”.

Rodriguez Cambana’s work has been exhibited in galleries, museums, and festivals internationally. In 2018, he was a recipient of the ‘Engaging Artists Fellowship’ at More Art, New York, and presented Waiting for the Session to Begin, a public artwork at Coney Island.

Born and raised in Peru, Rodriguez Cambana moved to Boston around the age of 19 years old to study art in all its different shades. “I really liked growing up in Peru, it was a very colourful place. It just felt very natural for people to paint or draw, even if that wasn’t necessarily very intellectualised. I was unfamiliar with contemporary art language, but I was super keen to understand the meaning of it.”

His years in Boston helped him to discover the nuances of what it really meant to study art in all its shades: “Considering what I look like, you know, I’m black, and it was a very white environment there, with very antiquated ideas about how to be an artist. But it is also where I developed a stronger relationship to art-making even if they made this distinction between performance art and theatre.

“They felt performance art was just a smarter medium. But for me, that was confusing because I really liked theatre. It had been a part of my life. I think a lot of places in Latin America have a really great theatre culture,” he said.

“I don’t necessarily feel like I need to make that distinction. I would say, interiorly, it was my first mode of resistance. I like theatre and I like other things and they don’t have to. I don’t like this dichotomy. Because I understood what I was making could be a way of resistance, I felt I needed to do something.”

After his experience in the US, Rodriguez Cambana decided to move to London to pursue his career as an artist and to experiment with different genres of art at Goldsmith University. This is where he met Arianna Mercado.

Mercado is a cultural worker from Manila, Philippines, now based in London. In 2018, she co-founded Kiat Kiat Projects, a nomadic curatorial initiative focused on alternative exhibition formats.

Her research focuses on informal networks, geopolitical entanglements, and historical materialism in the Global South. In 2021, she co-curated the Pigeon Pavilion at the London-Bangkok Biennale with Izzy Waite and with Rodriguez Cambana. 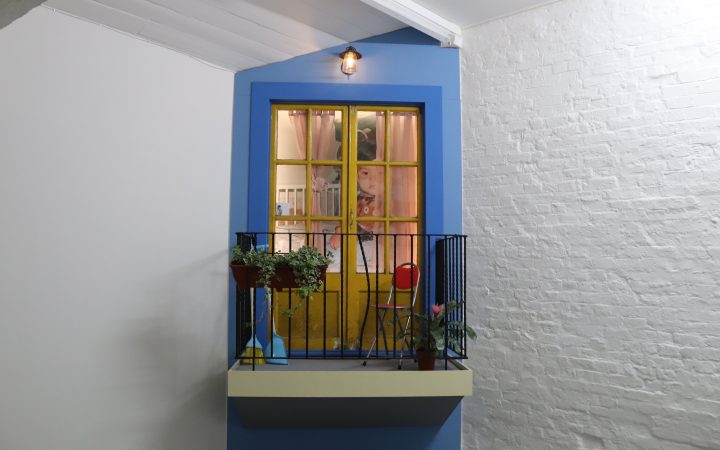 This exhibition is a continuation of the artist’s exploration of the scope, formation, and fiction of black and indigenous communities. His practice attempts to overcomplicate the concept of ‘community’, and in doing so Rodriguez Cambana criticises the imagining of purity, negotiating differences, their contradictions, and changing landscapes.

The idea of the exhibition came from the desire to represent geographical and emotional distance: “A lot of places in the world have balconies and I love theatre. Romance is performative in a way and I wanted to explore it more, how this gesture of loving becomes performed or becomes performative around you,” the artist told us.

The reason why they decided to use balconies is related to the different connotations that balconies have in a more general sense.

“There is this idea about vantage point, where you see things from the balcony in a very specific way. When you look at a community, you look at a certain type of person, from a high point of view and there is something from this perspective that either empowers you or either complicates that empowerment, depending on where these balconies are.”

Another connotation about balconies is the idea of public and private. Migration is also a fundamental part of this exhibition, and Rodriguez Cambana reflects on how surreal it is as an experience and how important it was for him to reflect that inside his work.

The narrative is very dear to him and the bodies behind the balconies are important to express a very specific narrative. 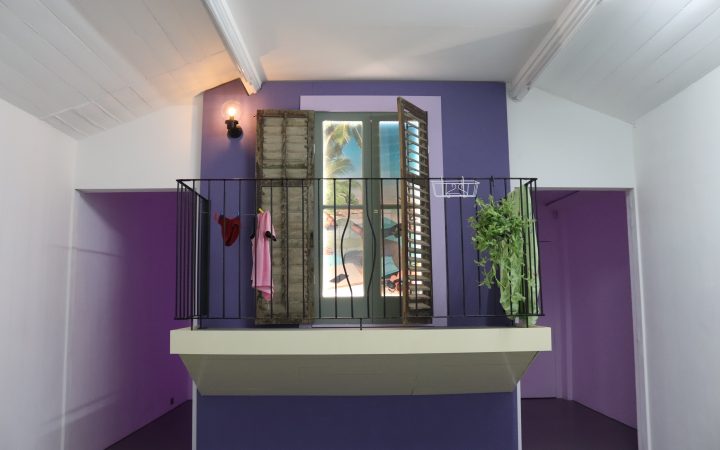 “What feels important to do right now is to cut the universalism of things. The images kind of help you navigate the work in that way,” he said.

In Ópera de Balcón, the two balconies in the dimly lit room sing to each other. Written by Rodriguez Cambana, the song is a ballad about romance, time, and distance.

Audiences are invited to decipher the private and hidden messages shared between structures through the Morse code, to uncover an opera shaped by militarised forms of communication, personal entanglements, and the political framing of immigration and diaspora.

They decided to use Morse code because of the ways certain languages have been militarised or politicised, and were also inspired by the history behind its invention. Romance has a specific role in the artist’s project and the story behind the Morse code is connected to it.

According to Abe Bullard’s National Geographic article about the history of Samuel Morse, the inventor of the Morse code laid wires along the B&O Railroad from Washington, DC to Baltimore, Maryland, inaugurating the age of the telegraph, the telephone, the internet, and then finally the smartphone.

But before that, letters were the main form of communication. In February 1825, Morse traveled to Washington, DC, because New York City promised him a $1,000 commission to paint the Marquis of Lafayette, who sent the hero back to the country he helped liberate.

Meanwhile, Morse’s wife Lucretia wrote to him from her home in New Haven, Connecticut, just four days’ ride away. She was pregnant with her third child. She wrote: “I think we can now indulge in the reasonable hope that in the not too distant future, you will be able to be happy in the arms of your beloved family.”

While working in Washington, he wrote to Lucretia: “I’d love to hear from you.” But he never did. When Morse wrote back her, Lucretia was dead. He rushed back to his family, but by the time he got back to New Haven, Lucretia had already been buried. 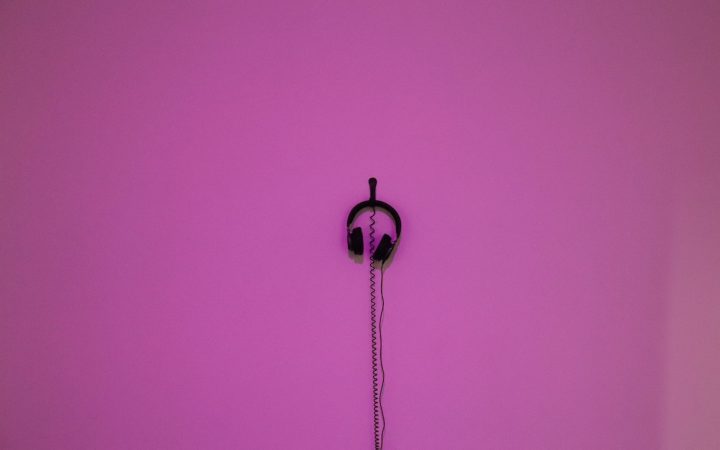 Headphones where people can listen to the Opera, written by the artist Rodriguez Cambana. [Carlotta Cerruti]

Years later during one of his trips, Morse was involved in discussions about electromagnetism and how it transmits information through wires and sends information faster than anyone had previously imagined. He began secretly working on a method of encrypting and sending messages.

In 1838, he returned to Washington, where he was most heartbroken, and tried to persuade the legislature to fund his telegraph. He failed again.

Four years later, Morse went back to Washington to erect a telegraph between two committee rooms to demonstrate the techniques that might have given him a chance to spend his final moments with Lucretia, or at least attend her funeral.

“The story of the Morse Code felt quite romantic but it also has been weaponised in a way. There was this angle that we felt was important to evoke, you know, this romance was deep into a very particular type of experience. And that experience was informed by our particular type of violence, you know? And so, for us, Morse code made sense,” Rodriguez Cambana said.

Through Morse code, the public has the opportunity to interact with the performance. The hidden message between the balconies is the song, an opera where the balconies “sing” each other’s verses that create a “call and response”.

For Rodriguez Cambana the meaning of the word “community” has changed: “There was this idea of community where everyone has similar politics and there is this assumption that everyone is on the same page but I believe we may have same politics, we may share some similar experiences but we don’t all have to think alike, right?

Mercado added: “I came at thinking about community in the sense that I had just moved to London from the Philippines, and I was looking for people who were like me, you know, which happens pretty often if you’re moving from place to place. And then I start realising it’s not just about agreeing with each other.

“There are so many variables within the community that you tend to overlook. For example, in arts communities and collectives, they have this whole horizontal vision, which is very nice to think about, and also optimistic,” she told us.

“But when you are actually in there, and the way they operate is not completely like that, it makes you question what does community really mean? I guess checks and balances within the community if people are power tripping, or whatever, are saying really mean things and they start claiming ‘but we’re a community.’ It makes you think is this what a community should be like? Well, I don’t know.”

The responses from the public to the exhibition have been very positive: “I have a friend that was telling me that it made her emotional. Even if the characters in this narrative are very different from her, she felt really attached to them,” Mercado said.

“She herself was of Indian descent and the exhibition led her to think about the divide between Hindus and Muslims, and it made her really emotional. She also reflected on her parent’s history, what they had brought down to her, and what their friends all talk about.”

Rodriguez Cambana’s future plans are to continue to provide an essence of unity in his works. The chemistry of his work is this idea of constantly moving, not only physically from one place to another, but emotionally. He believes that for both of them, it is important to see where they will take him:

“I love making art, I love doing this thing. But I also love other things. And you know, I don’t necessarily want to get stuck exhibiting, or be an exhibiting artist forever.”