Brixton Village Market has changed a lot over the past decade, with an influx of new money and business. What does the future hold for it?

It doesn’t seem that long ago when I would repeatedly return to Brixton’s indoor Market Hall to purchase art materials; every time hurried out of the area by pugnacious local boys. “What ends you from?”, “Oi you got the time?” and “Oi, wait here for a sec” were the familiar shouts in the run-up to the inevitable altercation. Luckily I never fell victim to any kind of ‘gaging’ (robbery) and would hot step to the train station or Stockwell Bowls.

These confrontations were part of a mid-noughties rights of passage as a teenager growing up in south-east London, but the discernible societal shift in Brixton presents a huge turnover of inhabitants, businesses and clientele.

There remains a nostalgia attached to the market – a local institution whose character is threatened by new ventures, supermarkets and an influx of Neo-Brixtonites.

The Market began in 1870 due to the area’s agricultural abundance, expanding throughout the following decades. Unofficial traders began to sell produce along Electric Avenue, occasionally having to flee the authorities for threat of confiscation. Brixton’s rebellious proclivities are steeped in its foundations.

Formerly the market consisted predominantly of fruit and veg stalls, where the absence of supermarket competition enabled it to be the primary source of produce in the area. The 60s saw the assimilation of Caribbean food, broadening the availability of exotic indigenous foods from other continents. The market became revered for its selection and in the coming years would welcome the arrival of other ethnically diverse ingredients.

Now in this era of Tesco Metros and other occupying food corporations, the market has yielded to an invasion of mass production and convenience shopping.

Terry, a fruit and veg trader who has worked in the market for 60 years after his business was handed down from his father, puts the jeopardy of the market down to supermarket chains luring customers away. ‘None!’ was Terry’s answer to my enquiry about the likely future and sustainability of the market.

His stall on Electric Avenue has outlived many others that have succumbed to council initiatives to ‘improve’ the locality. In particular, gentrification is no more pervasive than in the demolition of the multi-storey car-park, which was situated a trolley push away from the market. An ice-rink that has since been demolished was put in its place, but despite traders’ calls to reinstate a car-park, and the space has been reserved for future development. 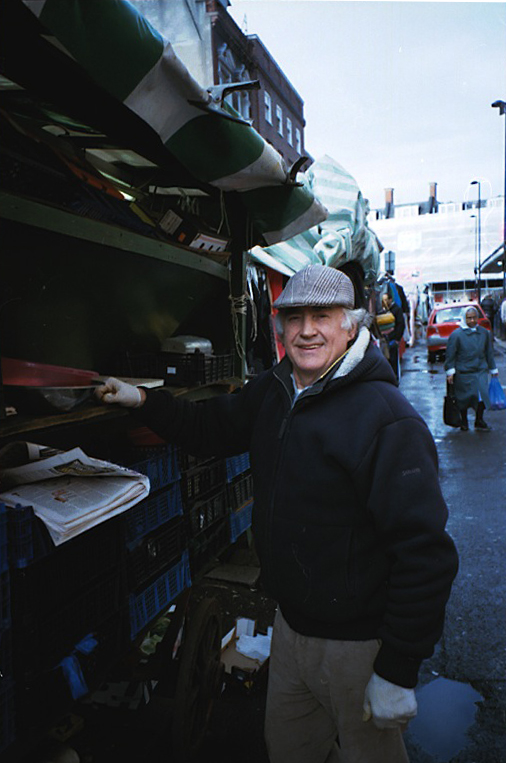 Brixton’s indoor market has recently seen a wealth of new businesses. One of the new-school proprietors commented: “It [the market] has adapted and we’re trendy now. With trendy come those types of customers… We’ve lost our regulars, our families. The people that would come in aren’t coming anymore… That whole community aspect, because you’re popular now.”

Whilst the property prices persistently rise as a result of middle-class colonisation, the owners of Burnt Toast and The Joint maintain that they source some of their produce from within the Market itself, acutely aware of the competition that has been driving out some of the former traders.

In some ways Brixton functions as a microcosm of London; the creation of the Brixton Pound by Transition Town in order to retain the identity of the locality and to ensure the circulation of money within local businesses that are competing with chain stores is the perfect example.

Although the scheme has been established in order to bolster the local economy, traders on Electric Avenue have another view. “Nah, it’s shit, I don’t bother, I’d rather see real money in my hands!” said one.

Worryingly, the performance of the micro-economy in Brixton is received with pessimism by those it seeks to safeguard. Is this just another initiative that isn’t dealing directly with the community under threat of redevelopment?

At first glance, the current state of the market looks to be an improvement to the area; a staple of south London that attracts tourists, foodies and bearded coffee enthusiasts. However, the prevailing sense of loss amongst market traders and their gloomy predictions about the future of the market reflect a community subject to a damaging inflation of wealth.

Now that it’s been reconditioned to the standards of those who drop by from Clapham and Hoxton on a Sunday, it’s an amiable habitat for anyone who would have got off the tube two stops earlier only five years ago. Brixton was once a place where you would cut your teeth as an inner-city kid, where the hustle and bustle was part of its appeal. And despite the abundance of twee cafes and smart restaurants, there’s a gap in my heart for those authentic, pre Champagne + Fromage days. Another mimicking swell of East London’s gentrification is not what South London needs, or deserves.