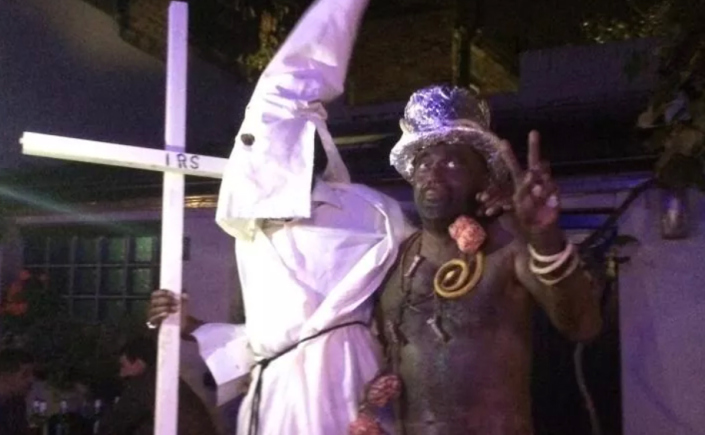 Staff from the Queen’s Head in offensive outfits

Brixton landmark The Queen’s Head is at the centre of a race row, after photos emerged of staff wearing what have been described as “offensive” outfits at the pub’s Halloween party.

Landlord Simon Tickner is pictured ‘blacked up’ as a witch doctor, while a member of his staff wears a Ku Klux Klan outfit.

The pub has also been accused of sexism and misogyny after someone using their Twitter account appeared to make threatening remarks towards a woman who spoke out against the images on social media.

Brixton resident and communications worker Nisha Damji was outraged by the photos, taking several screenshots and reposting them on her personal Facebook account.

“I couldn’t quite believe what I was seeing,” said Nisha. “Blackface or blacking up is completely unacceptable. The landlord has said it was just a joke, but blacking up has a really unpleasant history and caricatures black people in a really degrading way. That’s not funny.”

Having made comments about the photos online, Nisha says she was subjected to abuse from someone using the Queen’s Head’s official Facebook account.

“As well as being threatened with sexual violence, I was also called a bitch,” said Nisha. “It seems that when women speak out about things on social media they get these types of sexual language used against them, and in this case it seems to have been done so casually.

“Saying that, apart from the odd few people, I’ve received a lot of support from people who think the response I got was really out of line,” she told Artefact.

The pub has been widely condemned on social media, with Twitter user @sashasimic describing their actions as “racist filth”, and @monkeemel tweeting “Don’t go to the Queen’s Head Brixton”.

Event promoter Bashy Beats has cancelled its November 14 event at the Queen’s Head, making the following statement on their Facebook page:

“With regret we are cancelling this show due to the awful behavior (sic) of the Queens management team. We are searching for a new venue and will be in touch as and when we have details.”

Speaking to BBC London, Queen’s Head landlord Mr Tickner responded to accusations by apologising to anyone who was offended by the Halloween outfits, claiming the actions were an “absurdist joke.”

When questioned on the social media abuse Miss Damji received, Tickner said “there’s a lot of people who have the account.”

Lambeth Council told the BBC they would be investigating any potential breach of licensing.