With more than $450,000 (£287,000) raised ahead of schedule on its Kickstarter campaign, there’s a new technology start-up grabbing all the headlines. And for good reason – they have a hoverboard.

The great big caveat is that Arx Pax’s Hendo Hoverboard requires a non-ferromagnetic (that is, a material that isn’t a permanent magnet and isn’t attracted to magnets) conductive surface below it to be able to hover. But once you have the appropriate flooring, the result is an honest-to-goodness hoverboard of many a sci-fi fan’s dreams.

The dreams of Greg Henderson, Arx Pax’s founder and CEO, however, are far more ambitious. He envisions levitating buildings to hover above earthquakes, entire new forms of sport, and a world where anything can defy gravity. To find out about all this, and more, Artefact talked to Greg in an exclusive interview.

Artefact: Were you surprised at the success of the Kickstarter campaign?

Greg Henderson: We were well aware that there was a lot of pent up demand for hover technology. The hoverboard is one of those dream technologies that people were really hoping for, and it’s been an amazing pleasure to be able to release the first step in that direction. It really boils down to the concept of efficiency. We were able to make a big step with our technology and we know we’re not all the way there, but hopefully we’re opening people’s eyes to the possibilities and daring people to wonder while trying to inspire co-creation with everybody.

What would you say differentiates your technology from the maglev trains or floating globe toys?

That’s a great question, and there are other things that hover. The difference is being able to handle a dynamic payload. There are a lot of desk toys, and we’re offering one as a piece of memorabilia from the hover experience.

The technology [in maglev trains] is very unstable, and very expensive to create. What we’ve done in our shift and advances in efficiency is to be able to remove the need for the use of things like supercooling or superconductors and make this technology far more accessible and far less difficult to implement.

It removes the need for a track that is incredibly restrictive and expensive to build. The Japanese are working on a project outside Tokyo that will be ready for operation in 2027, and they are spending $500 million per mile for that solution. A lot of that is on tunneling, but still, you have to scratch your head when you hear those numbers.

So, theoretically, in the future you could do something like that at a far cheaper price?

So what are the limitations? Is there a height limit to how high you can hover?

We can push that, but what we’ve found is that once you break free of the surface, adding extra height doesn’t really serve you well – it takes a lot of extra energy. So you have to ask yourself ‘what is the optimum height?’ And for things like hover boarding and extreme sports, an inch is all you need.

There are a lot of applications in transportation, but also industry in the use of things like clean rooms [areas generally used for manufacturing or scientific research] where wheels generate a lot of problems because they generate particulate matter. Those problems can be eliminated. We can design the general lift clearance to go over an uneven surface, or to do what we need to do for a specific application.

What we need today is a conductive surface and obviously copper and aluminum work very well. There are other areas that we are exploring: when you’re thinking about conductive surfaces, metal pops to mind, there are other things that work even better. Graphene, for instance, if we can learn how to produce that inexpensively, and use it as a component of a new type of concrete… There are existing forms of concrete that are used in ski resorts or expensive homes where they just turn on their driveways rather than shovel the snow.

So we do need a conductive surface. It’s sort of interesting, one of our teammates pointed out to me recently that a car needs a road, and it just so happens that in the US the American taxpayer paid for all of General Motors’ toys. It’s a curious thing, every big system like this needs an infrastructure – this is no different in that regard.

As you mentioned, a lot of research still needs to be done. When it comes to Kickstarter, how much of the money will go to fulfilling backer’s orders, and how much to research?

We’re not relying on the Kickstarter to fund future research and development (R&D). If we broke all records somehow and passed them – I think it’s $13.6 million (£8.7m) – when you get down to it and take out all the costs associated with crowdfunding and fulfillment, you’re not really left with much for R&D.

The Kickstarter campaign is just a great way to say to the world: ‘Hey, let’s do this.’

What we’re trying to do, and that’s the purpose of the developer kits, both the Whitebox and the Whitebox+ [boxes that include all the necessary hover technology for developers to create their own stuff] is get developers. With the Whitebox+ the hover-engines are different because the ‘+’ represents plus propulsion and control. This is the stuff, the hover-engines and technology we want to put in the hands of all those tinkerers. When you get it, we don’t want to tell you how it works, we want to show you. We want to supply people with the tools that I used to figure out Magnetic Field Architecture [Arx Pax’s trademarked term for their technology], because we’re just beginning.

We’re trying to inspire a new hover ecosystem. Another key aspect of that is to get the technology into all the schools. Every science department in every school around the world needs one of these things to be able to explain not just the science, but that if students think differently they can solve impossible problems. That’s really important.

The Kickstarter campaign is just a great way to say to the world: ‘Hey, let’s do this.’

You’ve filed a patent for hovering buildings – how far away is that sort of thing? Ten years?

I’m really glad you asked that, because that really gets to the heart of what Jill [Henderson] and I are trying to do. In July of this year we had our first patent issued, and it’s essentially a low-tech solution for building structures in areas subject to earthquakes, floods and rising sea levels. This is a solution we could implement tomorrow. All we need is those daring souls in the capital to say ‘let’s do this’, and it’s my sincere hope that we’re able to implement an example project before the next big event in the [San Francisco] bay area.

So if you had a floating house, would electronics be impacted?

One of the demonstrations I do is I put my smartphone on top of the Whitebox while it’s operating. It’s very safe, you can’t even measure the field strength around the box, because it’s all focused down. It’s very safe, particularly relative to some of the maglev trains in China which require, by European standards, a 300 metre birth. I think the Chinese are giving them something like 25 metres. 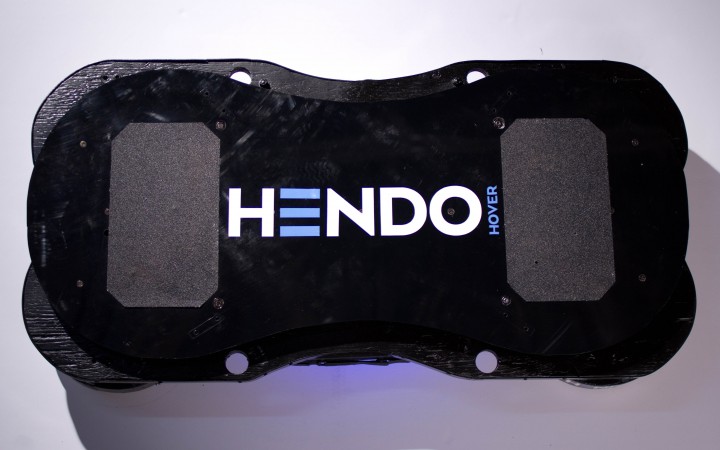 You’re doing a lot of iterating and prototyping. How quickly will we see new things?

Not quickly enough. Since we’ve started this, we’ve got some amazing input and responses from around the world. People are calling up and emailing with just great ideas. A few of them are things we haven’t thought of, and when those come in, we call these people. I’ve reached out to several people personally and said that ‘that’s a great idea, come on in, let’s talk’, because that’s what this is all about. I would expect new iterations and new kinds of product we haven’t even thought of to be out, available before even our hoverboards are ready next October.

At the moment the hoverboard is still quite expensive at $10,000 (£6,388). Are you thinking of renting it out in skateparks or something?

Hover go-karts would be awesome.

Yes, and very fast. Along the same lines, if you think about worldwide sports and you think about what gets the most attention – I’ll let you make the association here – new forms of racing where bumps and nudges can send a teammate soaring past everybody else. It just opens things up for all kinds of new ideas.

At the moment, what speed can the hoverboard reach?

We don’t have an answer for you as we don’t have the area to test. When you’re in stealth mode [a temporary mode of secretiveness for businesses], it’s hard to do anything at size. So that’s one of the things we’re really excited about, because when you use the technology, the acceleration is constant. If you look into things like linear induction motors, the speeds can be absolutely astonishing. So there are industrial applications for things that move very fast, but I think when it comes to propelling human beings, we can handle six Gs for about two seconds, so we have to be careful. Certainly the technology will outstrip the human ability to ride it.

After hovering buildings, which could have huge implications, what would you say is the next big thing you’re excited for coming out of this technology?

This is turning into a responsibility. Getting this technology into the hands of people and getting these systems implemented is a responsibility, and it’s a big responsibility that we don’t take lightly as the potential is there to do great good. The most exciting things – we can’t talk about them, because we’re still in the process of figuring them out.

So I would say stay tuned, as there are other technologies that are going to come out of this that are absolutely critical to solving some world problems.

Molly Crabapple: ‘As the world changed, my art changed with it’