Tortured, starved and imprisoned: the lives of North Korean refugees

Born out of the Cold War, North Korea is a strange anachronism on the world stage, intentionally cut off from the world, controlled by incredibly effective propaganda, and home to state-sanctioned atrocities the UN has likened to Nazi Germany.

Escaping from North Korea is a dangerous task, and many die attempting it, but refugees still manage to slip out of the country, seeking asylum in places like the UK.

However, a recent tribunal ruling in the UK could mean that North Korean asylum seekers are refused entry, and instead are deported to South Korea, even if they have no ties to the country.

Hoping to spread awareness of why North Korean citizens are seeking asylum, North Korean refugee Jiyoung Kang shared (through a translator) the harrowing story of her life in the hermit kingdom at a ‘North Korean Memoirs’ discussion on forced labour in London.

During the famine in North Korea, Kang was among those starving, so she tried to find food and earn foreign currency, but travel certificates were needed for her to officially get around the country and without them, guards who caught her “beat her and swore at her.” The whole country was suffering, and life was difficult.

Kang then told of how her eight-year old niece climbed up a mountain “to find wild greens and grass roots to eat” and suffered a few small grass burns as a result.

These wounds grew infected, but at the hospital they were told that they had “no medicine.” Her niece swelled up, with her hands becoming so swollen that “if you touched her, the flesh would come off.” She died in her grandmother’s arms.

In 1998, Kang fled to China, hoping to earn funds to feed her family, but struggled to find a job. Her cousin suggested a ‘people finder’ job where she would help send messages from families in South Korea to their relatives in the north, but those in North Korea would “tremble in fear at the mention of South Korea” as they knew they were under surveillance for having ties to the south.

Still, she managed to earn $100, “a huge amount”, and went traveling in North Korea. Again, she was caught, and was this time taken to a local prison.

For a week she was interrogated over whether she had met any other North Koreans in China, or visited the church, until she was released after her older brother bribed the guards to release her by giving them fish and “exotic cigarettes.”

In 2001, she fled to China again and met trafficked girls – “teens, children, mothers” – and heard for the first time the ‘truth about the Kim family’, the fact that they were not benevolent leaders with their best interests at heart.

“The North Korean propaganda is about 99% effective, you believe what you are told, it’s all you know,”  said Kang. She was “shocked and angry at the lies” she had been told by the regime.

After staying in China for a month, she was captured and repatriated, imprisoned near the border, and then was moved to a provincial prison camp.

There, she was told to plant food during the spring with fellow prisoners of all ages, “including children”. They lacked actual seeds for the seed beds, so they were told to plant corn.

Malnourished and bordering on starving, “nothing could stop” the prisoners from eating some of the corn, meaning the whole field was not planted. “I cannot count how many times I was beaten by the guards due to eating corn … there was no other way to survive.”

The children even continued to eat while being beaten, still “crying and bleeding.” After a while, the guards replaced the corn with “corn dipped in manure” so that they could not eat it. “The guards treated us worse than dogs or pigs.”

At one point, a woman who was heavily pregnant with a half-Chinese baby was brought to the prison. The guards kicked her until she went into labour and gave birth. They separated the mother and the child with a door between them and told Kang, the oldest, to keep an eye on them.

The mother pleaded with Kang to let her see the baby just once. “I could not say no.” For the “first and last time”, she saw a smile in the prison camp, but had to pay a high price for it.

They were “stamped on with military boots and beaten with wooden clubs,” with Kang thinking she “would die.” The baby, left on its own, when it passed away. Brought to tears by the memory, Kang told Artefact “I still have nightmares.”

When released, she fled to China again, but was caught in just 15 days. After her release, her brother begged her to stay, but she had become “addicted” to the idea of freedom, and left for China, this time with her daughter, her daughter’s husband, and their child.

She began working as a housemaid in China, hiding her nationality so as not to get caught. Her daughter and son-in-law were not as lucky, and were repatriated, leaving Kang with her granddaughter. Kang stayed in the area for years, moving from house to house, hoping to hear something from her daughter, but the situation “became risky.”

Using funds she had managed to save up, the help of an agency and the church, she was able to emigrate to England in 2009 and claim asylum.

She still has yet to hear from her daughter, but told Artefact “I have hope. I want my granddaughter to know a mother’s love.” 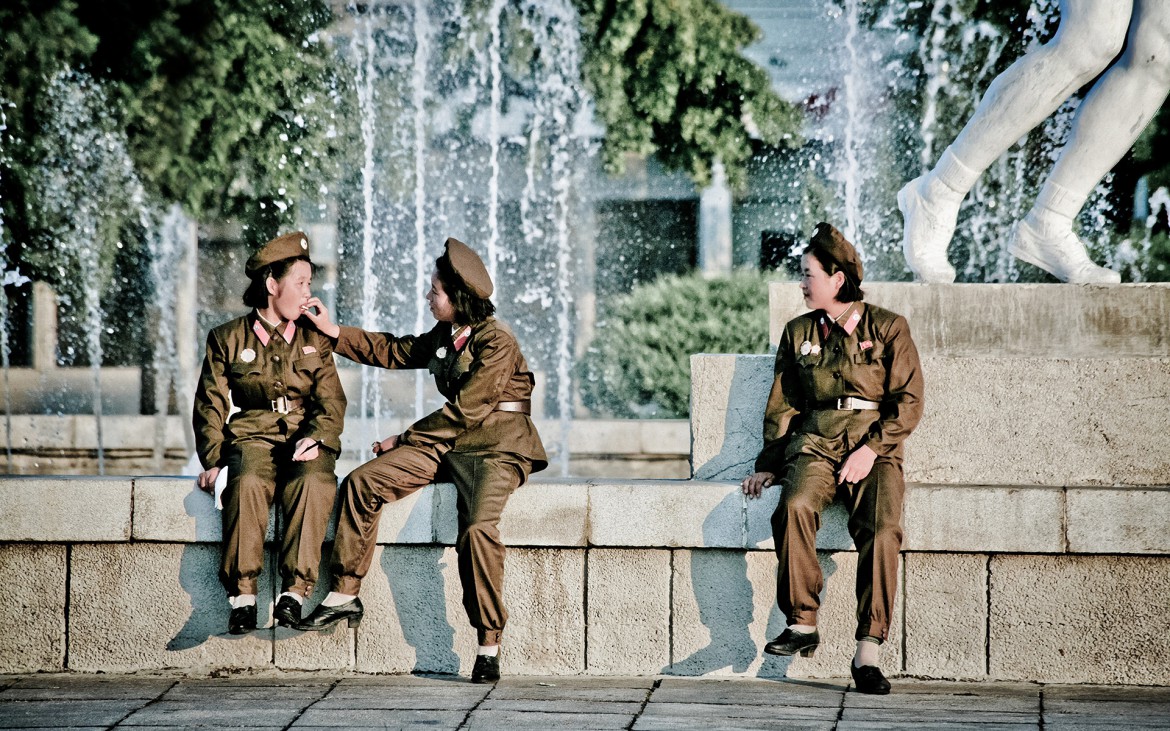 Also speaking at the discussion was So-Young Ko, who was born in North Korea in 1983 and grew up in the country’s capital Pyongyang.

“Studying is not important in Pyongyang,” she explained. Grades don’t matter, “family background does,” with children of important families managing to go to university.

Talking to Artefact through a translator, she told of how most of the lessons were about propaganda: “until noon you learn things like history,” which paints the Kim family in a very positive light, “after you learn how to do group parades and flip boards for messages to our leader.”

Primary school children were used as “forced labour” and are “tasked with rice transplantation, pulling weeds and picking up seeds.” On top of that, during the hot summer they were made to “transport water from rivers to cool train rails to stop them bending” in the heat.

They were also given designated quotas of leather, metals and other substances that they must fill, or they would be sent home. They were also made to catch hundreds of crickets to feed the pigeons that the Kim family apparently liked to dine on.

Her life as the daughter of a military serviceman took a turn for the worse when her father was “discharged for having relatives in China,” and they had to move to the countryside.

Ko told of how the people in Pyongyang “didn’t realise how people were starving in the countryside.” There were black markets with “children who stole food and picked up crumbs on the street.”

Ko described the worst moment of her life in North Korea: A man on the street was holding a small three-year old child and a sign saying that she was his daughter and “for sale”.

A crowd gathered and asked the man why he was selling his child, so he told them that he had not eaten in so long that “he was starting to go blind” and couldn’t care for his child.

Eventually, a soldier came and bought the child for a small sum. The father told the soldier to wait and rushed off to buy some food with the money, and gave it to his daughter. “She was so young … she didn’t realise the significance, she just held the food and watched her father as the soldier carried her away.”

Some time after this, Ko escaped to China with her parents, but Ko and her mother were quickly repatriated and imprisoned.

Still very young, Ko was released, but her mother was “tortured and punished in political camps” for eight months, before being released in what Ko believes was an effort to flush out her father.

Her local school would make trips to public executions, where the teachers would tell her that she “was a traitor” because of her father.

Ko and her mother were always under surveillance, but managed to escape to China after two months. She said that the trip to China included a 400km walk, mostly at night, and hiding from border guards.

Now, she “no longer has to be scared” of sirens and police and “can go to hospital when sick.”

“You can think of North Korea as a big prison,” she told us.