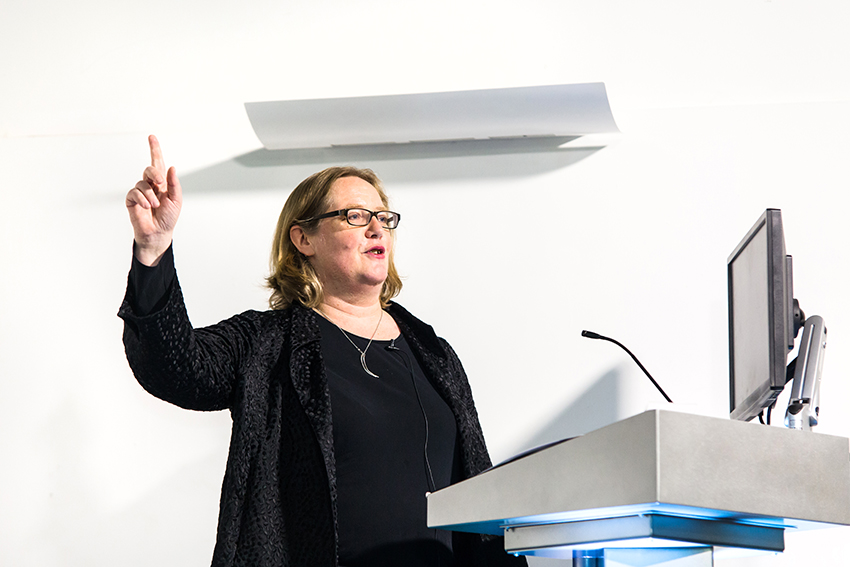 Print journalism may still have a future, according to the former editor-in-chief of The Guardian’s website, Emily Bell.

The admission came during a question-and-answer session after she delivered a lecture titled ‘The New Tabloid Press – Popular Journalism in The Digital Age’ to explain why technology needs journalistic values to a crowd of industry professionals, lecturers and students from all over London.

Speaking at the 12th annual Hugh Cudlipp lecture at the London College of Communication, Bell, who’s now the director of the Tow Center for Digital Journalism at Columbia University’s Graduate School of Journalism, focused on how news is consumed today.

She spoke about the future of print journalism – a future that she believes will be looking towards more integration with the web to respond to public demands.

Comparing modern journalism to the press of the ’50s, Bell explained print isn’t dead because it has a duty and a mission to carry forward the basic requirements for producing good journalism.

As major news outlets move their content online to keep up with the demand for news feed information the quality is waning in favour of quantity.

It is important to experiment “with the different ways serious news can reach a wider audience.”

Now that almost every news operation is using social media and quickly responding to what people want instead of producing more elaborate think-pieces, she said it’s important to experiment “with the different ways serious news can reach a wider audience.”

Looking at the social media giants and the way news is consumed in the internet age, Bell said print journalism is still relevant and more influential than ever: “Social networks are now attracting the same pressures and challenges at a much larger scale that journalism and civic media has wrestled with for years.

“Until now though, the default position of participants in the sharing economy, with the exception perhaps of Twitter, has been to avoid the expensive responsibilities and darker more complex aspects of hosting the free press,” she said.

In an ever-expanding digital native society where journalists are now part of the ‘sharing and liking economy’, going viral is the goal for news outlets, print or otherwise, using social media.

However in order for all publications to survive, journalism needs more people who are “technically proficient”. Without this mission, the media simply won’t be able to keep its head above the water, she added.

Alan Rusbridger, editor of The Guardian, was also in attendance and commented: “As the demand for consumer journalism increases, the need for good editorship also goes up. (…) It is important that quality investigative journalism is not diminished as news moves onto digital platforms.”

Bell later tweeted to her followers about the lecture:

Great honour to give the Cudlipp lecture tonight. Terrific engaged crowd at the LCC and v kind comments. I will turn it into a listicle…