From Brixton to the High Street: a future at risk

The businesses that reside under Brixton’s railway arches are at risk of closing, after Network Rail unveiled a new redevelopment proposal that could affect the livelihood of the South London borough.

The area wasn’t always the trendy food village it is today – the arches underneath the train station were once the home of prostitutes and drug dealers alike.

Only in recent years has the area experienced an influx of change and money that’s given the borough the unwanted title of the “Shoreditch of the south”.

We’ve decided now is that you have to move out of your flat and we are actually going to redecorate it.’

On February 5, Network Rail contacted 18 businesses in the area between Atlantic Road, Brixton Station Road and Pope’s Road to tell them they had six months to leave their plots.

If Network Rail’s application is approved, those plots will be subjected to redevelopment in the next year; shopkeepers were told to find alternative arrangements while the site beneath Brixton rail station was revamped.

Mark, manager of one of those shops, Budget Carpet, said: “In 25 years you never see or hear from the landlord, every time there is a leak you have to repair it yourself. Then one day someone rings the door bell and introduces himself as your ‘absentee landlord’: ‘Listen (the landlord says), what we’ve decided now is that you have to move out of your flat and we are actually going to redecorate it.’

“‘But once we’ve redecorated it, you are not moving back in. We’ve actually found someone else for it because they are going to pay higher rent.’  Then you actually offer to match the rent of the new prospected tenant. But they say deep down we’re still not going to give you. We’d rather give it to you cause their rent is more guaranteed.”

Budget Carpet and other independent traders say they have no guarantee that once the work in the arches is over they’ll be able to return to sustain their livelihoods.

An online Change.org petition has been set up in an attempt to protect the arches. Almost 15,000 people have supported the call to stop the evictions in Brixton and at Herne Hill, another site owned by Network Rail.

The shopkeeper of The Baron on Atlantic Road has owned his shop for 27 years. He didn’t want to be named, but told Artefact: “Network Rail and Lambeth Council have already formulated a plan to evict the independent tenants and replace them with corporate high street stores who they can tax more. This wouldn’t have been an issue if those tenants weren’t paying rent or looking after their sites, but they are.

“People come to Brixton because it’s unique, it’s slightly edgy and offers something new. But Network Rail are now threatening to tear away the heart of Brixton and turn it into any old high street. Gentrification and an influx of money has helped Brixton recently.

“This place had a nasty reputation for a reason. But we’re now in danger of of loosing the ‘real Brixton’, what makes it different to other parts of London. It’s another case of the corporate big boys getting greedy again.”

The new redevelopment plans have rekindled the debate on gentrification, but with Brixton now in the spotlight. 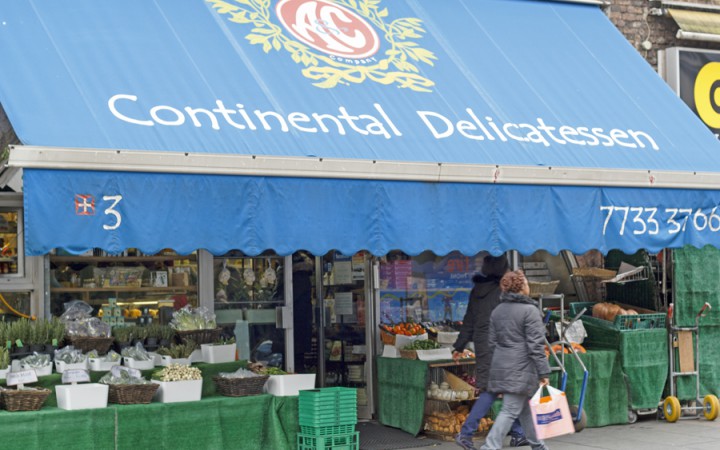 Continental Delicatessen is also under threat from property investors.

Another Budget Carpet employee talked about the further implications of gentrification in Brixton.

He wished to remain anonymous but said: “It’s the independent retailers and shopkeepers that take on the deprived estate boys who are out of work. I walk past these kids everyday on my way back from work  – they always tell me how infuriated and isolated they feel in Brixton now. If John Lewis, Waitrose or another one of these big corporate companies come in and take over the arches, then they won’t employ these kids.

“They’ll be looking externally for staff. Locals will be isolated, like they don’t belong. They are going to get angry, this anger will bubble up and god forbid, it might turn into trouble. The Tottenham riots [in August 2011] won’t be a scratch to what might happen here. Lambeth Council and big businesses need to reconsider what they are doing to communities.”

Councillor Jack Hopkins, Lambeth cabinet member for jobs and growth, said: “We want to see the diversity and individuality of Brixton maintained alongside any plans to refurbish the railway arches.

“The plans are ultimately a matter between tenant and landlord, however we are pushing Network Rail to provide a comprehensive support package and will be holding a meeting with the existing business tenants before the end of the month to discuss the issue.”