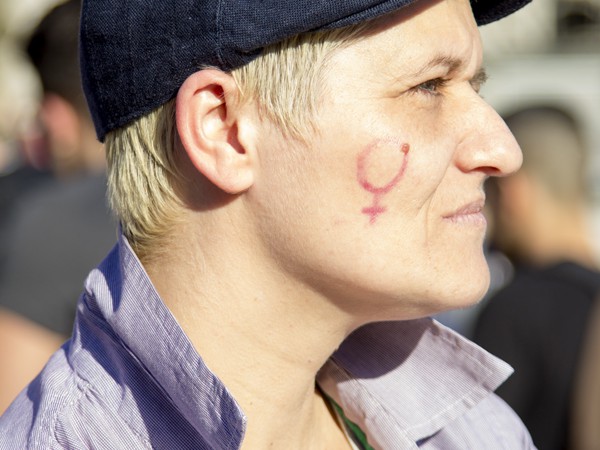 A ‘Million Women Rise’ stated one placard as over an estimated two thousand women from all over the UK and some who represented a minority of women from Kobanê, Syria and Eritrea the Horn of Africa marched towards Trafalgar Square.

It was a marvellous site, they looked glamorous, and they had purpose and were full of power. I had literally walked out of the Noodle Oodle in Soho, London to be greeted with an electrically charged air that exuded women who were full of confidence, and how that confidence has grown.

Since the founding of the National Union of Women’s Suffrage by Millicent Fawcett and Emmeline Pankhurst leading the way for women’s rights as early as 1903.

Women’s rights have come a long way, however that is not the full story. A majority of the women who had turned out ahead of International Women’s Day were making a just stand against male violence, using the slogan “WE CAN END”.

I found this very humbling, and just so, as when the throng of women had eventually reached their destination many men, particularly the photographers, or for that matter any male presence, seemed frowned upon at this event.

They had literally organised the whole event themselves. One speaker; Sabrina Qureshi, stated that they had cleared the traffic themselves to get to Trafalgar Square, was surprisingly perpetuating the crowd. The temperature had risen and the day brightened, some finding shade in the square cafe for some much needed refreshment.

The purpose was clear-cut though, just as Emmeline and Christabel Pankhurst had over a century earlier, even as going so far to be jailed for their rights to make a point.

So too was the belief in these women’s eyes, it was emotional in the sense that women from Kobanê, Syria had come in defiance not just against male violence but also against the terror group IS.

Since the beginning of 2015, nineteen women have lost their lives as a direct result of male violence, compared to one hundred and forty eight in 2014.

I spoke to some of the women at the march, who themselves have been victims of male violence, who supported the view that all violence against women must end.