Welcome to the Occupation

At the beginning, there were seven of us. Seven students and SUARTS officers walked into the reception space at Central Saint Martins on the evening of March 19 and refused to leave.

This was a profound reaction to University of the Arts London’s plans to cut 580 places on foundation courses, suddenly announced a few days earlier. The management’s decision exemplified everything that has long bothered us within the university: its elitism, lack of democracy, and profit-driven approach to education.

Foundation has long played an important part in arts education.

For countless artists and designers, completing a Further Education course was a truly life-changing experience, and the first step in their creative careers. Being free for home students under the age of 19, foundation courses allow young people to experiment with different disciplines and prepare a portfolio, without worrying about student debt. They are particularly beneficial for budding creatives from working-class backgrounds, who might not have had high quality art education at school, or don’t feel ready to commit to paying £27,000 in fees. For many poorer yet talented kids, doing an FE year is the only chance to get into the creative industries. Our data also shows that foundation helps reduce the attainment gap for black students.

Yet while invaluable, FE courses are not as lucrative as more expensive BAs. The current climate of austerity and marketisation of education sadly causes many universities to get rid of them. As an institution with an ever-growing turnover and a multi-million surplus, UAL could easily keep subsidising foundation. Instead, it chose profit.

The decision was announced without any consultation with students or trade unions. Dozens of staff got notified by email that they’re at risk of redundancy. It quickly became clear that management would not respond to our concerns. We realised that a disruptive direct action was the only way to ensure that our voices are heard. None of us expected the occupation to last nearly a month, attract thousands of supporters, make it to major newspapers and prime time TV, and end with a court case. 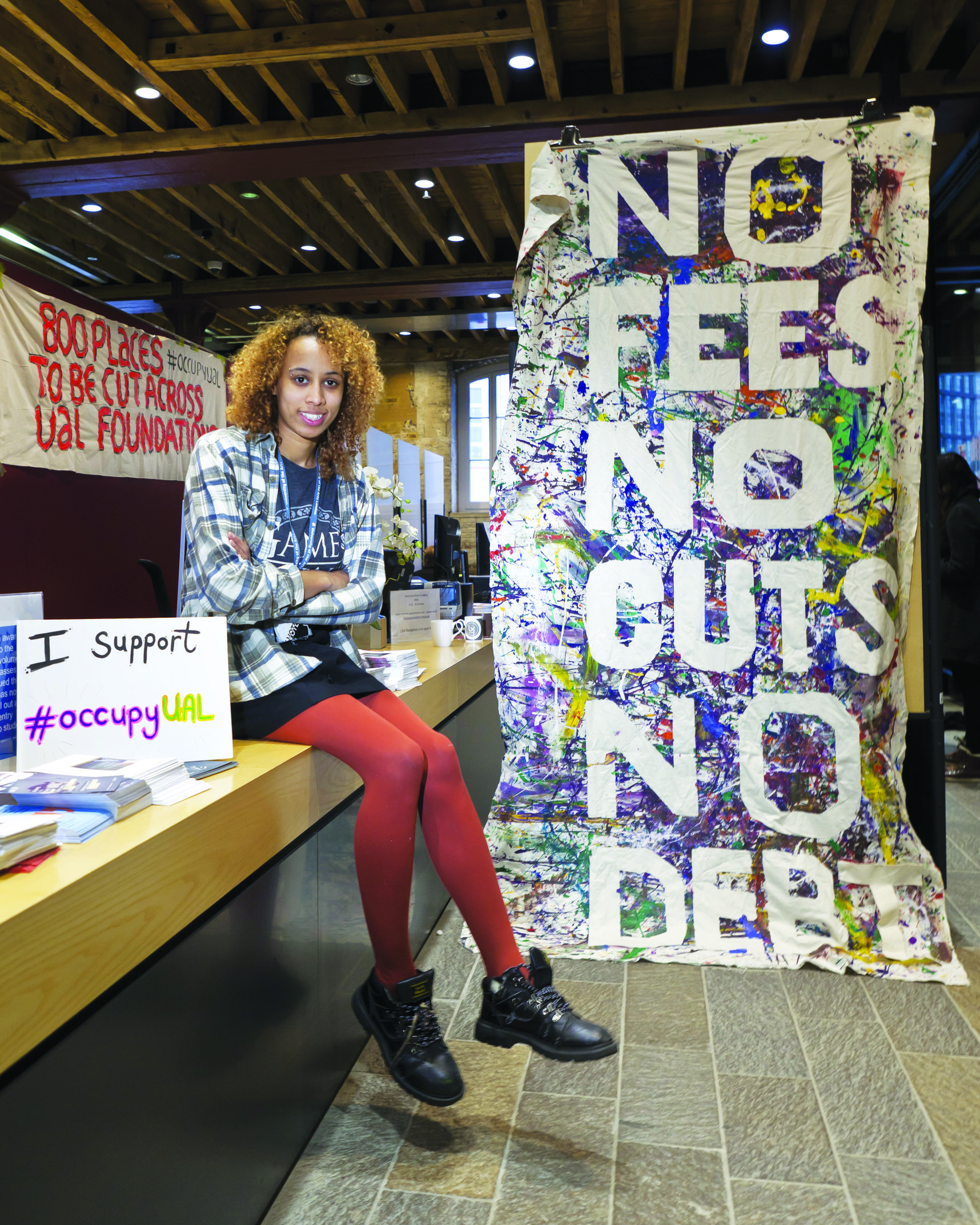 The four weeks, during which we lived at the reception, were an amazing time. The space included a meeting room, a computer space, a kitchen, toilets (which we made gender-neutral) and a couple of sofas. We had between five and fifteen people sleeping in the occupation on any given night, and many more coming in during daytime. We shared all our food, some of which was bought by the occupiers themselves, and some coming from donations. Every evening, we had meetings during which we democratically decided our next steps. Throughout the day, we organised creative workshops, talks, discussions and other educational activities. We also played games, watched films, exercised – and made friends for life.

From start to end, we kept trying to negotiate with management. However, many of our emails got ignored or met with inconclusive replies. We were willing to establish a compromise, but we felt like the management failed to seriously consider any of our demands. It didn’t help that the university used morally dubious tactics to set students against us, such as closing studios and campuses – even though we had no intention to occupy other buildings, or disrupt student spaces. We launched a petition to extend deadlines and compensate students for the closures, but that also saw no response. Despite that, we had loads of students coming in to express their support, as well as many members of staff – who asked us not to reveal their names for fear of losing their jobs.

I don’t think I’ll ever forget the day when, returning to London after a short Easter break, I found on my doorstep a thick envelope from the security company BLM. Inside was a letter with names (some of them misspelled) of fifteen rather randomly picked ‘trespassers,’ ordering us to go to court. We weren’t unprepared for consequences, but this looked scary. We soon learned that we couldn’t contest the case, or even have legal representation. We had to remain silent throughout the hearing, or we’d face additional costs. This is the British ‘justice’ system.

Finally, we were forced to abandon the space, but UAL agreed to drop costs and disciplinary actions on the condition that we leave without bailiffs. Some saw this as a surrender on our behalf – but not being expelled from the university and crushed by five-figure charges allows us to continue the campaign.

Gone are the boxes of hummus, eye masks and dry shampoo. Doors were unlocked, banners were taken down. However, the battle or Further Education is not over.

Over 4K people are asking @UniArtsLondon to stop the cuts to Foundation. https://t.co/bvN6H1Ww0I

The fight for FE is about democracy and financial transparency. It’s about levelling the playing field, preventing job losses and putting students before profit. Finally, it’s about protecting art and education from the ruthlessness of the market. Without a foundation, arts education is unstable.

“It is a great shame that the protest had to be resolved through legal action, particularly as many members of the University feel strongly about the matters raised during the protest. The University would prefer to have resolved the sit-in through dialogue, but after nearly four weeks of failed negotiation, it became clear that this was not possible.

Of course, freedom to protest lawfully has always been, and continues to be, a fundamental value of the University.  But this action had nothing to do with lawful protest: it concerned unlawful and severely disruptive occupation.

We confidently expect – and will welcome – further lawful protests and debate on issues of importance to staff and students, carried out within UAL’s Freedom of Speech Code of Conduct.”