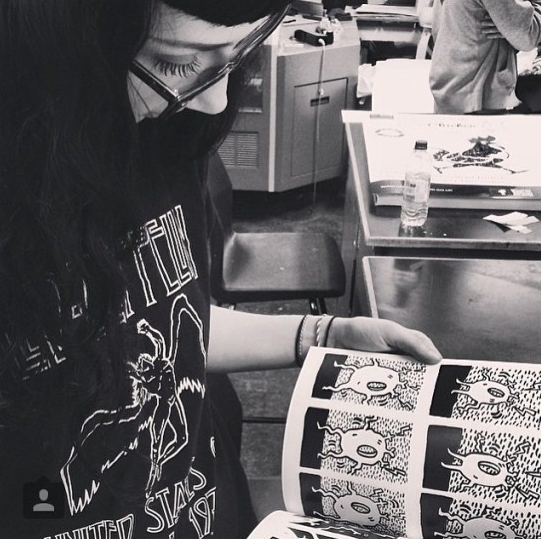 Cressida Djambov, a third-year BA (Hons) Illustration undergraduate at London College of Communication, already has the maturity and talent of a working professional.

There is an overwhelming sense of honestly to Cressida. Her precision and sublime attention to detail in her work is helping pave her way to success. Paintbrush in one hand, cup of tea in the other, she discusses her most memorable university experiences, what to expect from her final show and what the future holds.

Why did you want to study illustration?

I didn’t want to just study something that was superficial. I originally applied to do a print-making course but I wanted to learn how to make images that were more in depth and still do print rather than just learning technical skills.

How have you found third year? Was it as big of a step up in terms of work as you thought it would be?

Yes, it was a very big step up. What was tricky was that there wasn’t deadlines throughout the year, so keeping your workplace up was completely down to me which I found quite difficult and I didn’t time manage as efficiently as I should have done. So it meant that closer to the deadline there was a big panic and lots of rushing.

What were the most rewarding aspects of your course?

Working in the studio with my classmates. I feel like my year group was really strong. We are all very different so we knew how to get the best out of each other. When the tutors are not around we would just talk over ideas with each other and get a lot from each other.

What is your most memorable university experience?

Buying my tutor a pint. We did an exhibition last year which wasn’t part of our course. We raised money on Kickstarter and put together a show. The first day we went to view the gallery space we went to the pub down the road afterwards and I bought him a drink, which I was very proud of. It’s something to tick off my list.

Who are your favourite illustrators right now?

Right now I really like Ricardo Cavolo, Laura Callaghan, and Luke Best who I’ve always loved. Luckily, I had the pleasure of working with him as I tutor which made me feel like a little schoolgirl, getting the opportunity to work with and get advice from him.

It was very good. He was very good at listening to what you were talking about with you ideas. Picking out key words and helping you develop your ideas from what you say rather than ‘oh why don’t you do this’ which some teachers tend to do. I’m quite a traditional illustrator like him so he was definitely the best person to talk to and get advice from.

Where do you draw experience from?

Everything. From people and galleries to books and Google images. I like to type in words I think of and see what images come up.

How have you changed from the start of your course to now?

I’ve become a lot more critical of my work. I guess at the beginning the aim tended to be to produce something that looked good rather than it doing what it’s supposed to. This course has taught me the fundamentals of illustration and it doesn’t really matter what it looks like if its working as an image. That when it’s successful, if it’s saying what you initially wanted it to say and it communicating with people. I have my tutor Paul to thank for that.

What’s the idea for your final show?

It’s still in the making and in its development stages but I’m creating an installation piece surrounding domesticity. So eventually it will look like a wall in a house with pictures, shelves and plant pots. I want it to be big and colourful.

Where did the idea derive from?

I guess it stemmed from me not just wanting to put picture in frames up on the wall, I wanted to do something a little bit more than that. The Illustration course gets the main spot in the building for our final show; it’s the part that visitors see straight away. The college always gives us that spot because they have faith in us enticing people.

There’s a lot of pressure in that and for previous shows I’ve been to at LCC, the ones that I’ve found more intriguing are the pieces that are really striking. I just want to create something really colourful and bold so it doesn’t get drowned away by everyone else’s work.

There seems to be a real revival of illustration at the moment – magazines and websites are showcasing sketchbooks and commissioning more, and illustrators and exhibitions are popping up everywhere. Why do you think it excites people?

“I think illustration is a lot more accessible than Fine Art.”

Fine Art can be very conceptual and the messages tend to be hidden. I recently wrote an essay about taste with the argument being you have to know about certain things to have taste. An uneducated eye may not understand historical or social context for a piece of fine art whereas illustration is supposed to get to the point and it’s more accessible, with advertisements for instance. I think a lot of interesting things are happening with illustration and the use of colour, and boundaries are being broken. Illustrators can exhibit their work in a broader spectrum.

What advice would you give to students in their first and second year in preparation for third?

That’s a tough one because I always found it strange that in my course your first and second year doesn’t count towards your final grade. I guess I would say make full use of the facilities while you can. Use your first and second year to really experiment so that in your final year you’ve tried everything and you can pinpoint which methods and techniques your comfortable with using, or that you like using the most in order to develop them further. Just have fun and make full use of the facilities and your tutors.