Protesting in Dover with Open Borders 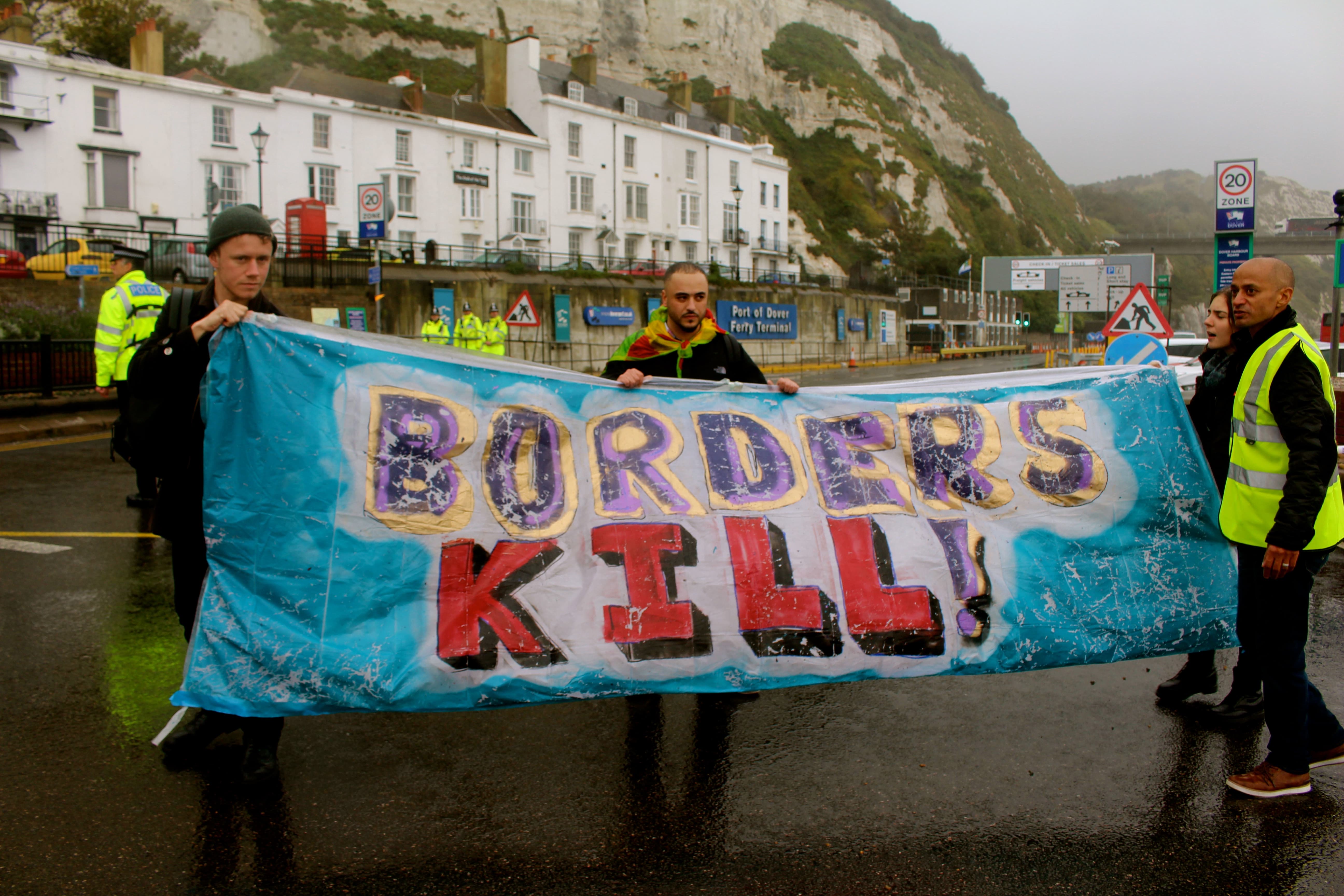 Migration is one of the most talked about issues in the world right now; many people have opinions on it – strong ones in some cases.

Groups like Open Borders think the British government is not doing enough, especially considering how politically involved they have been in the refugee predicament.

Artefact spent a day with the members of London 2 Calais (L2C), an organisation that provides supplies and necessary products to refugees who currently live in the Calais camp.

As I waited for everyone to emerge, to get on the coach, about one hundred of us met at Russell Square at 8:30am.

Protestors came with banners and a cheery presence, on a Saturday morning, a time when every other living being in the UK was probably having a nice lie-in.

The time reflected the commitment L2C clearly had. After a few minutes of waiting, we met up with everyone else and made our way towards Dover.

The two-hour journey passed surprisingly quickly; as soon as we got to Dover protestors went straight into action, marching straight for the port.

One of the protestors had come prepared, leading the chant and shouting into her loud speaker. Immediately, everyone chanted “Say it loud! Say it clear! Refugees are welcome here!” 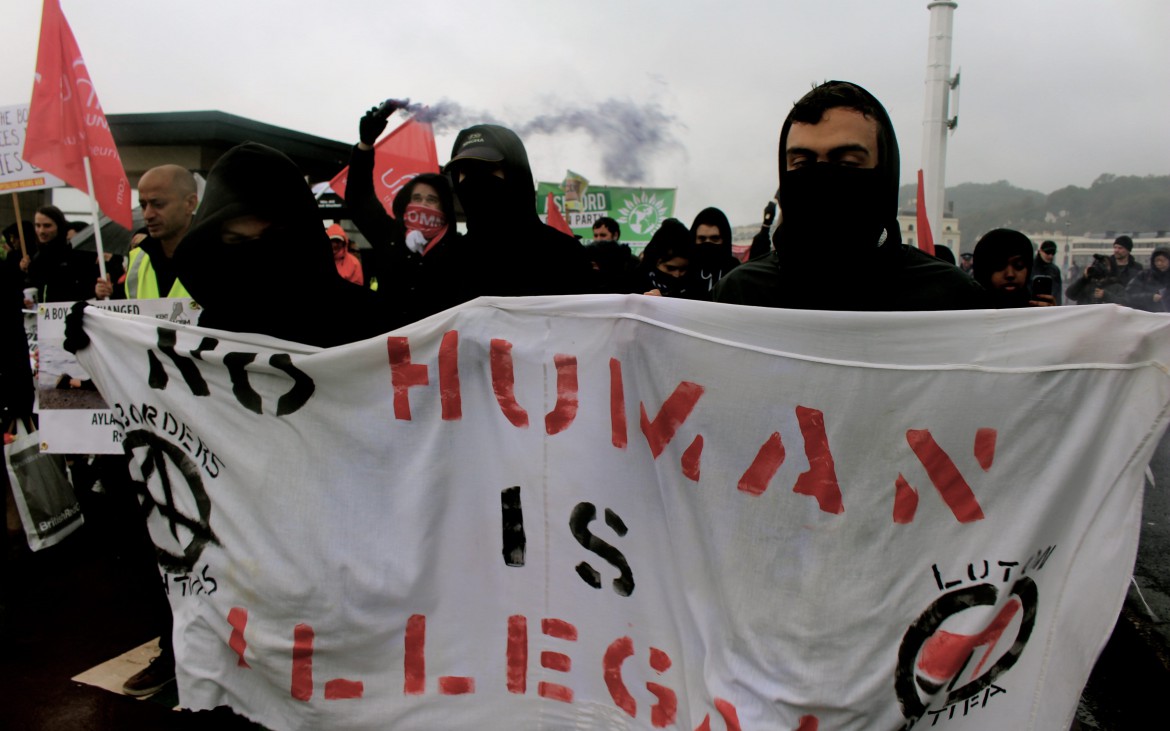 We marched through the secluded streets and were met by supporters cheering out of their car windows clapping for us, and at other times we got weird looks by baffled onlookers who didn’t know what was going on.

Some weren’t too happy that a bunch of Londoners came and protested at their port. One burly man, who was pushing a stroller with a child in it, shouted “No, they’re not” in reply to the “refugees are welcome here” chant.

Approximately 750,000 thousand refugees have made their way into Europe this year, a majority coming from war-torn Syria.

This protest arose after Prime Minister David Cameron faced a backlash from critics when he announced that Britain would only be taking in approximately 20,000 refugees – in the next five years.

This was a miniscule figure compared to the number of refugees other European countries took in.

For example, Germany agreed to take the largest number, it is expecting 1.5 million by the end of the year, and Hungary coming in close second. After these two the numbers taken by other EU states drops significantly. 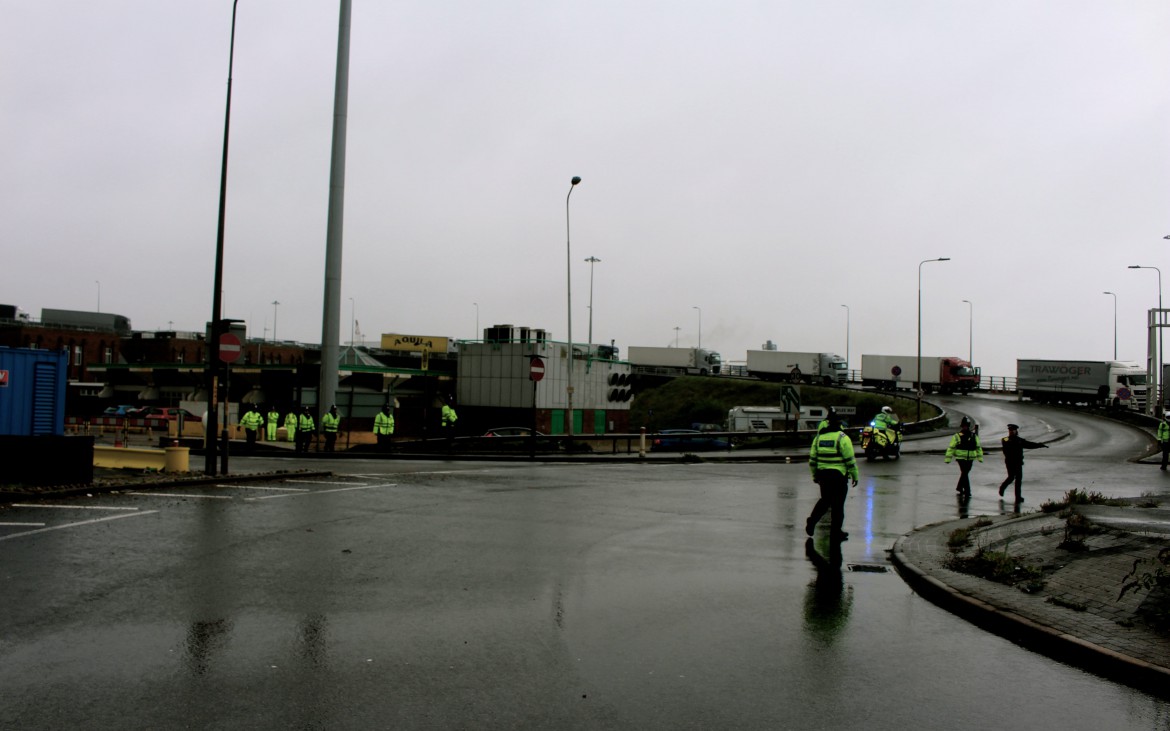 Police emerge from directing the lorries, which came from Calais, and then towards protestors [Hani Richter]

Mona, who was one of the organisers of the event, said “i think it is unacceptable that Britain is refusing to take any form of responsibility for the situation, because it’s not ordinary, under any circumstances. I think people should be free to move to wherever they want to go”.

“The whole distinction [the government is making] between economic migrants and refugees is extremely unhelpful. It’s not good. Obviously there are people that have to leave for political reasons, but also somebody who is starving – who cant afford any food should have the same rights”.

“Why are people with European passports who are predominantly white free to move? Whereas people from other parts are excluded from this – it is a form of apartheid legislation you could say that needs to be addressed,”  Mona continued. 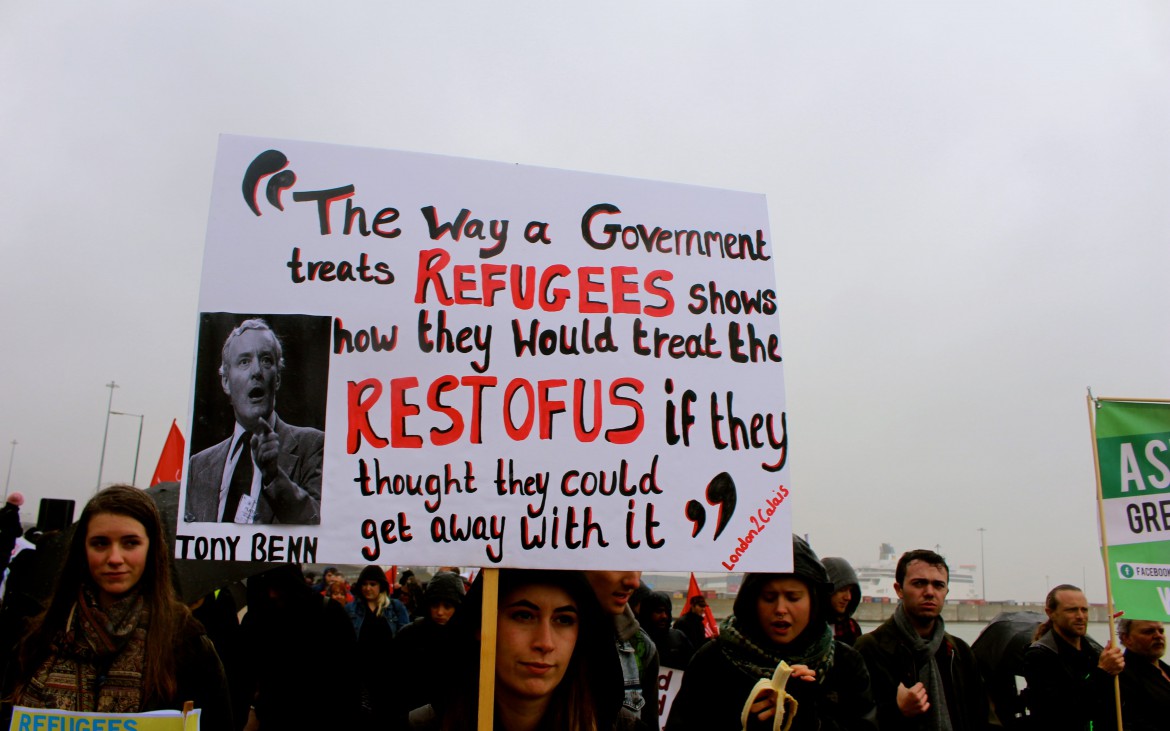 Many signs and banners were produced by the protestors [Hani Richter]

The group of protestors stressed the point that 20 miles away, in Calais, it was a very different situation.

There has been an increased support for the refugees due to the harsh winter to come, but the reality is that many are living on the street, with no home; most make temporary shelters with plastic bags, clothing, and sticks to hold it all together.

The main camp is called the Jungle – literally. Many of the inhabitants come from troubled countries. The current estimated figure of people living there is approximately 6,000 to date.

Tom, from the Ashford Green Party, said: “now at the moment what were doing is were saying ‘No, close the doors you’re not welcome here’, and that’s not right. I wouldn’t want to be treated that way if I was fleeing from a war”.

“My house may have been bombed, family members may have died on the journey here. It’s monstrous – not right and that’s why I’m here. We need to let these people in.” Tom added. 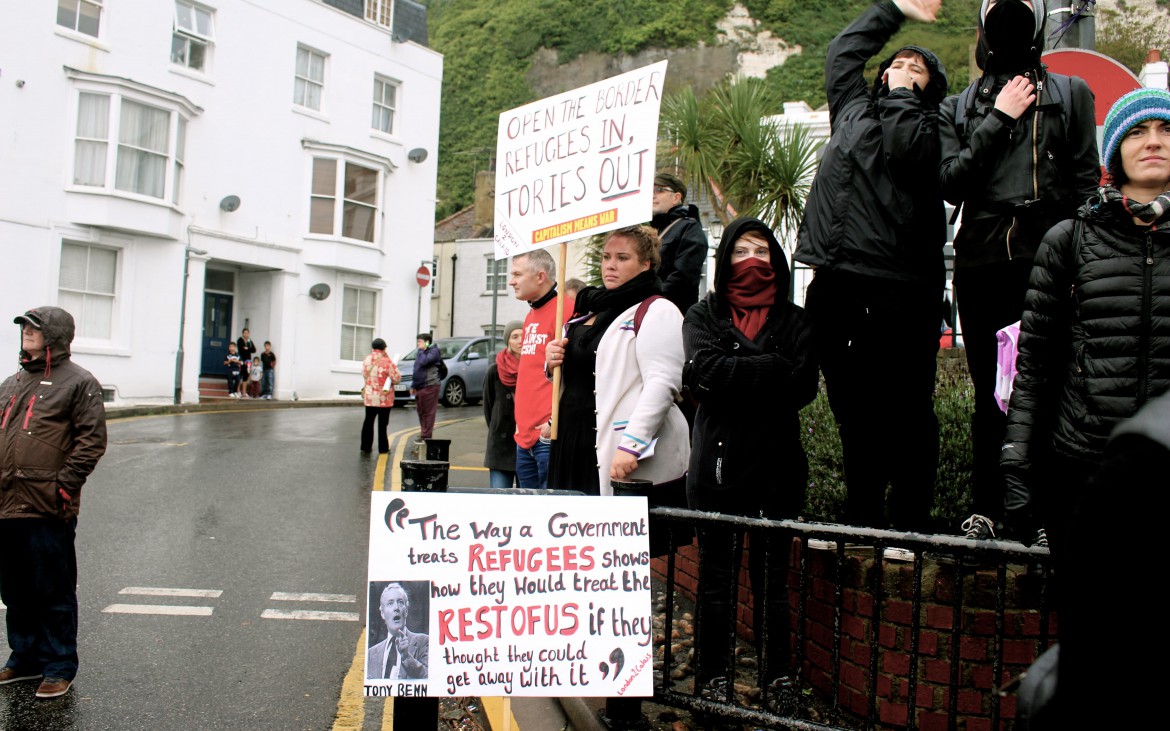 Most refugees who reach Europe try to get to Germany, who has had the most lenient entrance policy so far, even though it has vowed that it will propose tighter restrictions – pleading to other countries in the EU to share out numbers.

The main reason in which the refugees want to reach central Europe is because of the better prospects of getting a job.

A protestor called Ian told us: “the government’s attitude to refugees is absolutely appalling, I think that the refugee crisis has been caused by our foreign policy – the foreign policy of the European union. We’re the problem and the least we can do is open our borders to allow the refugees in”.

“We caused the issue, we caused the crisis, we’ve got a moral responsibility, I think, to actually welcome people to this country and give them a safe haven from the absolutely appalling situations they’re facing at home.

“I think the language that’s been used: overwhelming. They are using very emotive language and then they keep on saying that most of them are not refugees – that they are economic migrants,” Ian continued.

“It’s utter nonsense, they’re twisting, turning and lying – and doing less than the rest of Europe. I mean if you compare the number of refugees this country has agreed to take in, compared with the rest of Europe it’s really appalling”.

“So they’re lying. They’re manipulating the truth and their still not taking in enough refugees. It really is a sad, sad situation I think and that’s why today is so important.”

At the height of the crisis, in the summer, David Cameron referred to the refugees as a “swarm of people”. Critics argued that his use of language was dehumanising.

The Liberal Democrats’ new leader, Tim Farron, told The Guardian: “by using the prime minister’s language, we lose sight of how desperate someone has to be to cling to the bottom of a lorry or train for the chance of a better life”. 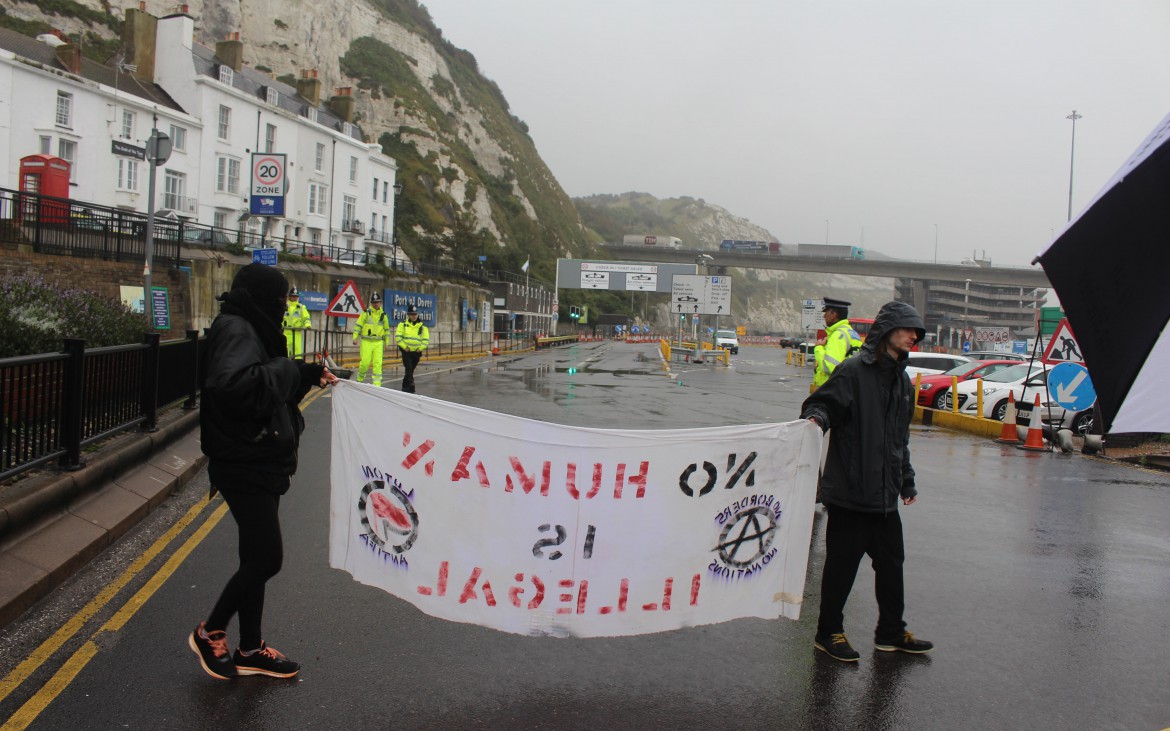 The camp in Calais was considered a burden in the past. It was first established when the Red Cross decided it would open a base there. After that its popularity surged, for obvious reasons.

Those who couldn’t get in camped outside and more and more people did this until the French government finally decided they had enough – ordering it to be closed. This resulted in riots in the early 2000s.

In 2009 a new camp, in the same location, was bulldozed and the inhabitants were arrested. These raids happened for a few more times and have now led to the latest 2015 camp.

Security is the tightest it has ever been in Calais with the police patrolling the border 24 hours a day.

As we marched I met Mark, who was wearing a bright red shirt which said ‘Unite against racism’. He told us: “Traditionally I’m not an activist, I have no political allegiance. I’m very much against racism – I’ve experienced it. I’ve had to help people”.

“Others around me have turned a blind eye and looked the other way and now since the rise of UKIP and Britain First – I’ve seen an increase in racism and a change in politics and our government have said reluctantly said that they are taking in 20,000 people over five years, which I believe amounts to around eleven people a day on average”. 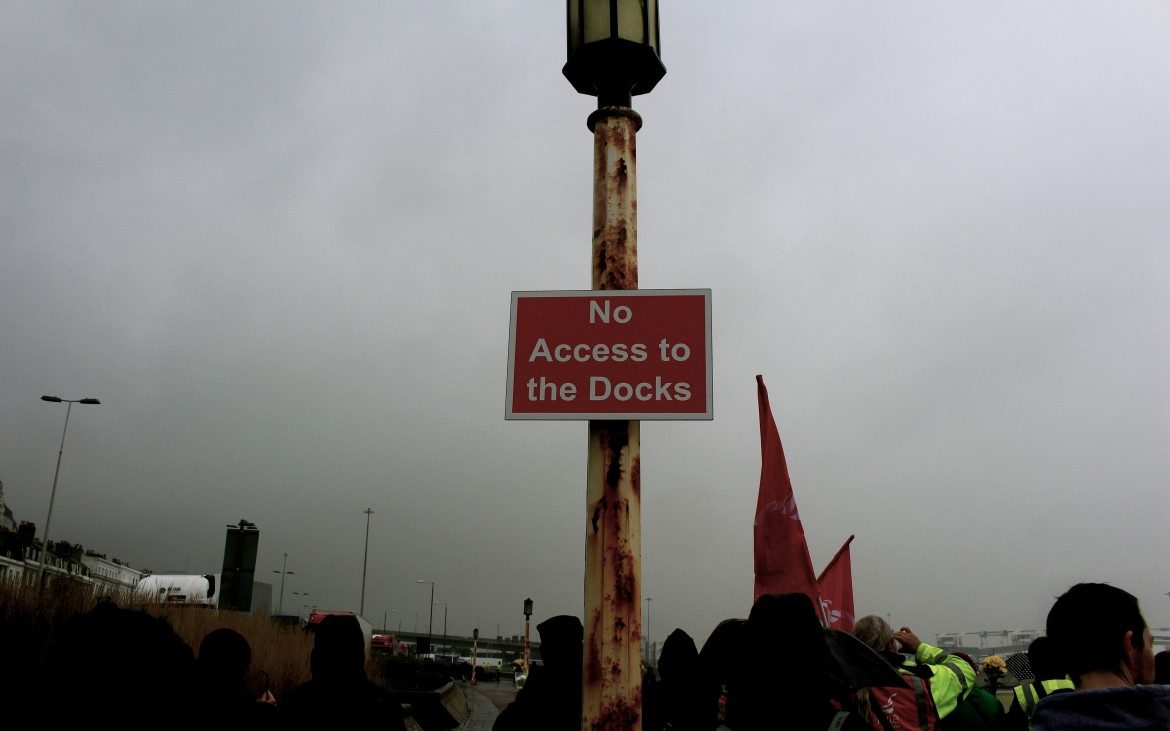 On the ride back the protestors felt they accomplished something great – this was evident through the continuous singing on the coach back.

The protestors were already planning the next event a week after, and a trip to Calais not long after that.

It was clear that the only recognition the group wanted was the government’s, and they are not settling for anything else.