David Bowie | A Tribute To The Brixton Boy

Whilst all around the world, the news may never truly sink in, hundreds of people took to the streets of Brixton to grieve in immersive fashion.

The day after the announcement of David Bowie’s death, many didn’t know where to turn.

An elusive character who we’d come to take for granted in the warm comfort of his mysterious immortality had disappeared, and whilst the White Duke’s existence had been elusive for over a decade, our lives somehow felt hollow without his presence. 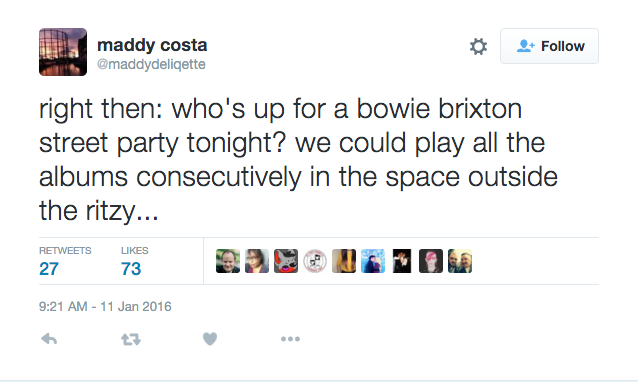 Whether he returned to space, faded into the distance or died peacefully with that wry smile on his face, his departure sparked a global mourning.

From the Vatican to the White House, there wasn’t a part of this simple planet that went unscathed that day.

As strange as it is, the people who gathered in Brixton started celebrating – slowly realising this was not an event of despair but of thanks.

Nobody in the history of this world has had such a strong effect on every generation and in honour of one of the most famously humanistic people on this earth, we remember him in what we imagine would be his preferred style, dancing in the street.

Many spent the night after his death in Brixton and captured the atmosphere.

From the solemn calm outside his mural surrounded by offerings of indescribable gratitude, to the unified celebration outside the Ritzy cinema, Brixton payed homage to the man who fell to Earth, down into Stansfield Road.