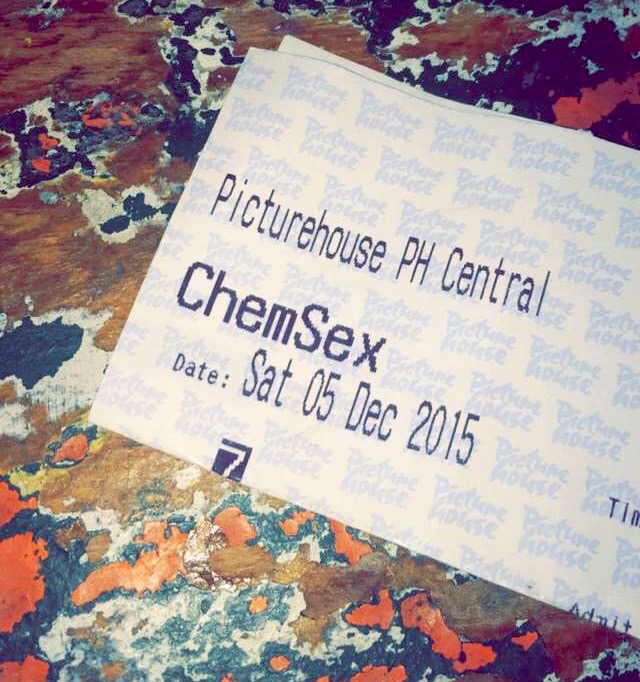 Drugs make you feel good. Sex makes you feel even better. It makes sense that people would want to put the two together.

There’s a sub-culture forming within the London gay scene revolving around the hedonistic, dangerous cocktail of the two together called ‘ChemSex’.

It’s the title subject of Vice and Peccadillo Pictures’ new feature-length documentary, and I went along to see what it’s all about.

Unless you’re involved in that world, the chances are that, like me, you don’t know much about chemsex, if anything at all.

Chemsex is a term coined by gay men predominantly on sexual networking apps and sites, such as Grindr, and is defined as “the use of three specific drugs, or ‘chems’ for sexual purposes.”

The three drugs associated with chemsex are methamphetamine, mephedrone, and GHB. They enable users to engage in extended sex sessions, often lasting for days at a time, without the need to sleep or surrender to your usual inhibitions.

Every day, in London alone, five gay men are confirmed to be HIV positive

The intimate piece of film follows a group of young gay Londoners who agreed to speak to the cameras frankly about their weekend activities and the dangerous world of chemsex that they immerse themselves in.

The documentary has a shocking amount of no-holds barred access to this usually closed and private world.

It shows graphic scenes of drugs being taken intravenously (known as ‘slamming’), as well as explicit sex parties and just how easy it is to lose days at a time on chems.

David Stuart, the substance abuse lead at prominent sexual health clinic 56 Dean Street, acts as a middleman throughout the documentary, contextualising and explaining.

The three drugs associated with chemsex are methamphetamine, mephedrone, and GHB

The stories shared by the group of young men are completely harrowing; these aren’t just stories they’ve heard along the grapevine that happened to a friend of a friend, it’s their reality and they’re the people at the heart of this growing issue.

A stand out anecdote for myself was of the BA and MA graduate who, through an addiction to chemsex from the age of 20, ended up “homeless, jobless, hopeless and selling (his) body.”

The documentary highlights just what a risky environment the chemsex world is for the guys’ health as well as their mental wellbeing.

There’s the glaringly obvious risk factor that comes along with taking drugs of any form, multiplied ten-fold when taken via slamming because of the chance of contracting hepatitis from sharing needles.

This is coupled with the fear of the last high profile gay sexual health epidemic, HIV.

It’s a hit-and-miss at the sex parties shown as to whether protection is used, which is concerning when you learn that every day in London alone, five gay men are confirmed to be HIV positive – a huge amount for just one city.

It’s revealed that there is a sub-community that actively seeks to contract HIV through sex with those that are HIV positive, known as ‘pos-ing.’

There was also the guy who says he pretends he is HIV positive, in order to get what he calls the right type of sex.

Although this is coming from a select group within the group, it’s something all the film’s subjects can at least empathise with, and we hear one guy saying “the sick thing is I can understand it in this lifestyle.”

Another tells of how he contracted the virus after a night where he overdosed on GHB, and physically died.

“it looks to some people like greedy, self indulgent, promiscuous gay boys, going out having fun on drugs. It’s more complicated than that.”

The emotional and mental effects of this health crisis are so prominent throughout the film.

The people these men are falling into addiction and dangerous sex habits for are nothing more than strangers.

They don’t have anything more in common with them than their addictions, and they don’t stay around and become real friends.

They fill a void for them for those few drug fuelled days, and get to feel important to the countless people they’re having sex with, and the people who are hosting the sex parties.

This is an incredibly important piece of film, it’s addressing and exposing the biggest health epidemic the gay scene has seen for decades.

It’s a difficult watch at times, but this only stems from the brutal honesty and frank discussion from within a very private, underground world.

David Stuart sums it up by saying rather hauntingly that “it looks to some people like greedy, self indulgent, promiscuous gay boys, going out having fun on drugs. It’s more complicated than that.”