Cycling in the air 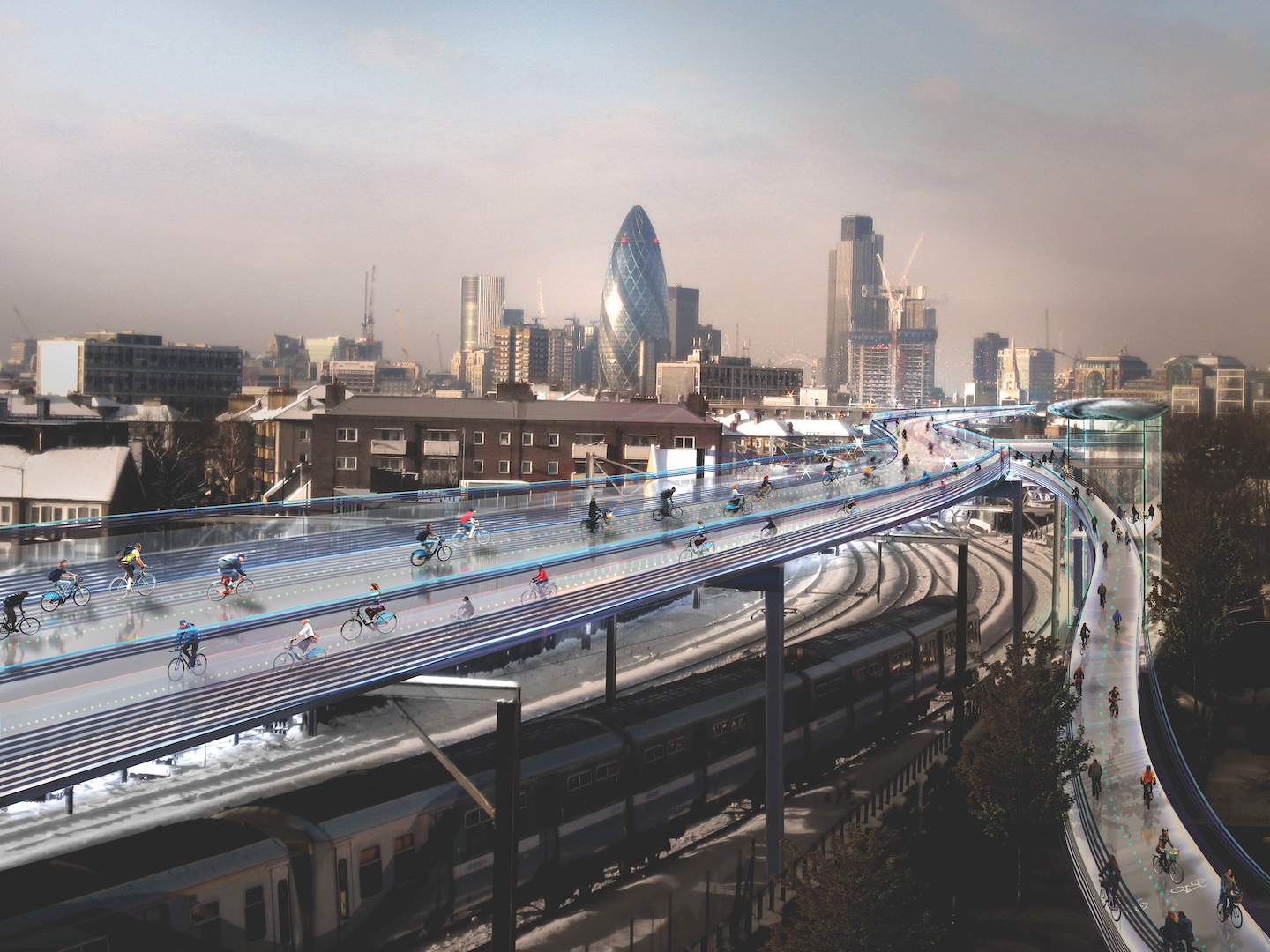 The population of London grows by 80,000 every year. 10 million people are estimated to live in the city by 2030, meaning more people will be commuting in London and a lot of them will be looking to move around in the cheapest possible way. However, the cheapest way can also be the most risky. Whoever cycles in London would agree with me that cycling in London isn’t easy, it’s hectic and dangerous, mainly because of the non-friendly roads for cyclists. 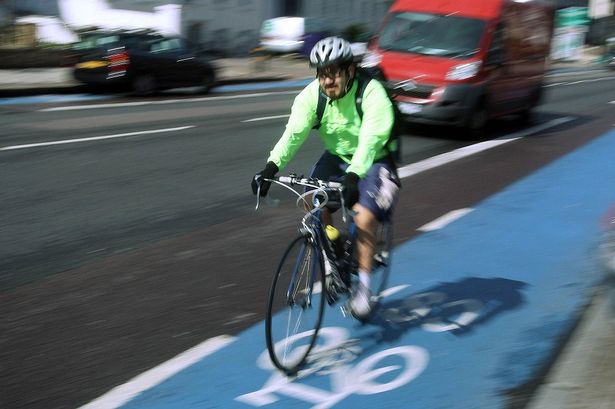 A person cycling in London using the cycling superhighway

So far what’s been done for cyclists in the city is minor, the blue painted cycle tracks are inadequate for the simple reason that most of them are a small part of the bus lanes that remain very dangerous, especially when battling ferocious double-deckers at junctions. To improve the roads for cyclists, the North-South and East-West cyclists only superhighways are being build around London. These superhighways will connect the four major areas of the city once completed. Unfortunately, these cycle superhighways aren’t being constructed all across London.

A great city like London needs a radical solution to encourage its inhabitants to cycle, in spite of the dangers spread by word of mouth or the Evening Standard. This radical solution could come in the form of SkyCycle.

Could you imagine yourself being able to cycle in London above train tracks, far away from the buses, traffic lights, pedestrians and the other multiple things that get in your way when riding the streets of London? Well this might be possible. Two architects from Exterior Architecture have proposed a plan that could solve London’s problems regarding transport: the SkyCycle.

Despite the collisions and fatal accidents that cyclists have experienced on the roads recently, figures have shown that cycling in the city has risen about 70 per cent over the past decade. As a result, SkyCycle London is a transport infrastructure project entirely dedicated to current and future commuters on bikes.

Instead of digging down underneath ground levels like the Transport for London’s (TfL) Orbital Tunnel plans for car drivers, the SkyCycle would use materials which are already available and build the network of elevated cycle paths above train tracks. The routes have been designed for all Londoners, to allow them to commute to work or university in the fastest and cheapest way possible, improving journey times by 30 minutes according to the proposals. 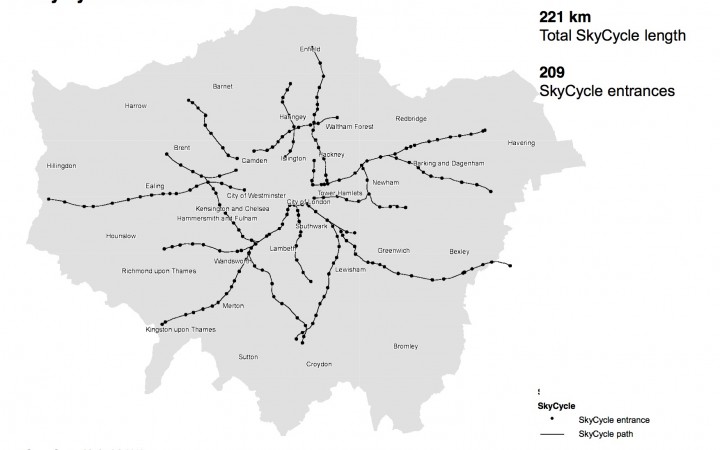 With more than 200 entrance points, easily accessed through hydraulic platforms, this cycle superhighway in the air will be accessible from all around the city, about 210 kilometers (136 miles) long, as far as the M25 goes in few places. The SkyCycle will itself be a network; it could directly connect its users easily to the city and other areas. At up to 15 metres wide, the SkyCycle would certainly not create any traffic on the roads and could challenge London’s cost of transport with no intention to charge its users any fees.

At this point, I do agree it will allow us to have an amazing view but it still sounds absurd to cycle ‘in the air’, two floors above ground levels. I thought to myself that it would mainly result in negative consequences on the cycling activity of our city until I met Sam Martin, one of the two architects behind the SkyCycle project, in his office at Exterior Architecture. In a city like London where most of the roads and the streets are  not wide enough to build a cycle path on the side of the main roads like in Berlin or Copenhagen, model cities for cycling, as explained here by Sam Martin, SkyCycle is a solution to the problem of space: “London’s firsts roads were build a long time ago by the Romans for horses careering, they are not wide enough for cars, buses and cycles. If we want to improve the activity and the safety of cyclists, there is no way we can knock down side buildings to make roads wider. We will have to think about something new and building in the air is a solution to that.”

The SkyCycle proposal was developed by Sam Martin and his employee Oli Clark, and its innovation quickly caught everyone’s attention. Developers and other architecture firms such as the world-renowned Foster & Partners, responsible for the Millennium Bridge and the redevelopment of Trafalgar Square in 1996, and Space Syntax joined. At first, the idea was just a thought as explained by Martin: “One evening after work we were on our way to the pub with Oli and he suddenly started the look up at the railway tracks which are part of our every day sight from the office [located in Battersea]. This is how it started, he asked me: ‘Why don’t we put a cycle path above them?’ and we’ve been developing it ever since.

“The proposal was welcomed by Network Rail and a few months later we found ourselves in City Hall having a conversation with Boris Johnson in the hope to get his approval. Unfortunately, he did not approve the cost of it as we estimated the first trial route from Stratford to Liverpool Street (about 6.5kms long) to cost about £220 million. It sounds like a lot but it is actually cheaper than building traditional roads or tunnels.”

Instead, the Mayor decided to invest in the Garden Bridge, which will only be accessible by pedestrians and does nothing to help the rising number of cyclists dependent on the busy and chaotic roads and their commuters.

Cycling offers many benefits. Figures have shown that people who cycle to work express more joy and less frustration than people who drive or use public transport. The developers of SkyCycle know all this and this is why they believe it’s important that the project gets approved: “It will promote health, lower obesity, decrease the problem of air pollution in the city and also be an environ- mentally friendly transport option.”

Ideally, the suspended cycle paths could generate energy by using solar paneled roads, as developed in Netherlands and also could be used as a method for rainwater collection.

Cyclists around the city have been skeptical regarding the project because our first impression was that we’d be isolated from city life. However Martin reassured me: “SkyCycle is a solution for people who cycle to commute to work, it is taking away people from the transports but certainly no trying to take them away from the city. People could still cycle in the streets on ground level, at their own risk.”

With a constant population growth and a rise of housing in the city, cycling is certainly the cheapest way to get around. The problem is that London is far behind the culture of cycling: “London is not a city for cyclists, the infrastructure of the roads do not allow us to live in a cycling-friendly city like Copenhagen. For example everyone in Copenhagen cycles, firstly because their roads are wider but also because it’s incarcerated within their culture. London isn’t like that and this could change if people were feeling more confident to cycle safely in the city.”

Nothing is technically happening to the SkyCycle project until they get political support and that is the only thing they are officially waiting for because until the Mayor of London approves the plan, no building can be done. Boris Johnson already rejected the project so the team is talking to other politicians including candidates for the London Mayoral elections, due in May this year.

The SkyCycle’s chances of being built depend clearly on a political approval. If it were to receive approval, the network will take over 20 years to be built so the estimated 400,000 SkyCycle riders -during rush hours- will have to wait to be able to cycle in the air and the rest of the Londoners to enjoy impressive sights of the city.