Junior doctors are greedy, not caring 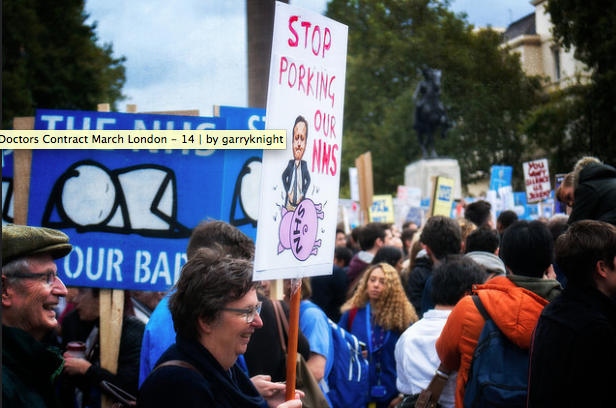 The recent junior doctors strikes have been encouraged by many young people, but do they really know what they’re arguing about?

Of course, junior doctors work long, tiring hours and peoples lives are in their hands; but what did they think they signed up for?

As things stand, junior doctors work 38.5 hours a week, less than most people in full time employment, and they get paid more for working weekends and unsociable hours.

Proposed changes to contracts would mean they work the same amount of hours, but their two days off a week could be any two days in the week.

This means that junior doctors are protesting, and cancelling operations because they effectively want to know which two days in the week they’re not working.

According to a survey seen by The Independent, 90% of junior doctors would consider resigning over contract changes.

It all seems ludicrous that people who should fully understand the role of a doctor would feel this way.

People get ill seven days a week, so we need doctors seven days a week. The NHS struggles to fund itself so it really shouldn’t have to be paying people more to care for people on a saturday or sunday.

“Patients are suffering, the reputation of the medical profession has been damaged”– Nick Summerton

Hundreds of young people and refugees would love the chance to be a doctor in England. Not for money, but out of a willingness to care for others, because caring is a vocation.

They knew when they were filling in an application for medical school that they’d be required to work long, unsociable hours, and they’d have to stay alert for it.

It’s all part of the job, so why complain now?

It’s an important job, and certainly not something I could do myself, which is why I would never consider doing it. The ability to cope under pressure, the stress, the skill and knowledge required to do such a career is admirable, but doctors should be doctors for the right reasons.

It’s normally easy to be angered by Katie Hopkins, but sometimes she does have a valid point, although she could probably voice her opinion without offending the masses.

The people protesting are clearly doctors because they think it will get them a fat pay check, and is that really the right reason to be doing such an important job?

Of course, the problem here is more than just the issue over contracts. But of the strikes taking place, affecting patients up and down the country. Junior doctors strikes have meant that 4,000 operations have been cancelled, as well as many more appointments.

One NHS employee, who preferred not to be named told Artefact “I feel for the junior doctors and don’t agree with what Jeremy Hunt is doing, however I am fundamentally opposed to members of a professional body striking. This is not the way to have a discussion, it cheapens the whole thing and risks the goodwill of the public. The junior doctors are playing into the politicians hands!”

Experienced doctors have spoken about how easy junior doctors have it today. Dr Nick Summerton wrote a piece for the Mail Online expressing his opinion that “the junior doctors’ strikes have been a disaster. Patients are suffering, the reputation of the medical profession has been damaged.”

He added, “I have no wish to return to the past. Every third weekend I would have to be in the hospital from 8am on Friday through until 6pm on Monday evening, snatching a few hours’ sleep when I could. Unlike the junior doctor who appeared on television last week grumbling that he had ‘come in to join the strike on his day off’.”

It must be irritating for people who have had more of a struggle for less pay, to watch young privileged junior doctors complaining and striking over pay for a job they should be passionate about, without the pay determining whether turn up to work or not.

More 48-hour strikes have been scheduled for the coming weeks. So if you were planning on seeing a doctor soon, I’d hold tight for a while as they’re going to be incredibly busy picking up for where the juniors have left off.