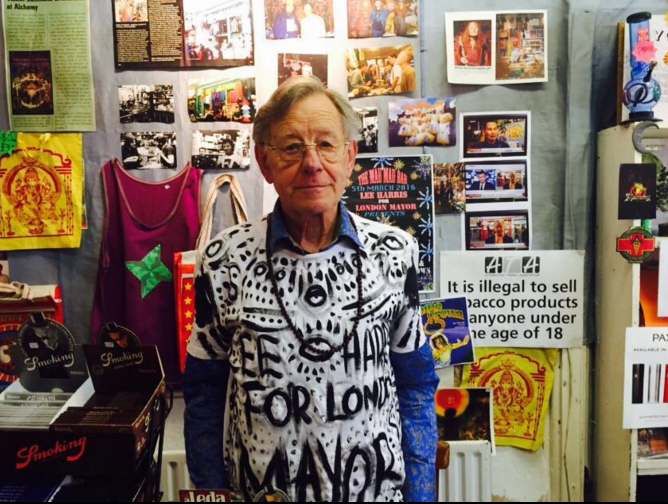 Meet the 79-year-old hippy Grandad who is candidate for Mayor of London, with plans to deliver his lifelong dream of legalising cannabis in the UK.

He is now standing against the likes of Sadiq Khan and Zac Goldsmith in the hopes to win the Mayor of London seat, with the help of his political party Cannabis Is Safer Than Alcohol (CISTA).

Artefact met up with Lee Harris in his Alchemy shop on Portobello Road, where he has spent the last 35 years being the foot soldier for counter-culture, spreading his words along the London roads.

Surrounded by bright colours, bongs, tobacco equipment and the aroma of incense dressing the room, Harris is serving customers in the most friendly, happy manner, friends of his make conversation with me. I then realise what Lee Harris is about, a man who wants to bring all cultures and stories of the world together.

It was the psychedelic hippy life in 60s when Harris joined for cannabis freedom. Behind the counter of his shop, he says,

“The Summer of Love in 1967 was when I became pioneer for the changing of cannabis. I went to to the legalised pot rally in Hyde Park, and I wore flowers in my hair and a badge saying ‘no search without a warrant’. I have kept that dream going ever since.”

The grandfather of three begun his hunt for drug legislation in the UK after leaving his home town Johannesburg in South Africa aged 19 and starting life on Portobello Road.

He is a member of CISTA, a political party, formed last year in the general election; the party proposes a new approach to drug reform, in particular the Class B drug cannabis. 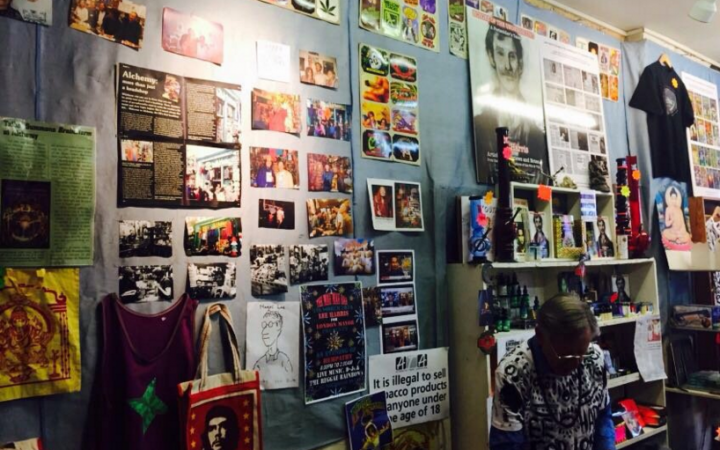 In his quirky CISTA promotional top over his coloured hippy shirt he tells me “Medical marijuana has come to the forefront and I think recreation of youth cannabis is safer than alcohol.

“I think its about time that cannabis was legalised in this country. It’s happening in many states in America, many parts of the world and this countries laws are a bit arcane. Theres a paradigm shift in public opinion and cannabis is a medicine.”

The policies of CISTA include decriminalisation, legal regulation, state control and rescheduling of cannabis sale and consumption. One policy the party are fighting for in particular is the use of marijuana as a form of pain relief.

Harris states: “CISTA is a new political party, which started last year in the general election and fielded quite a few candidates here. It is working mainly to get medical marijuana legal for doctors to dispense marijuana for people who are in chronicle pain, convulsions. Cannabis is proven to be a very effective therapeutic tool.”

As it stands there are 23 states in America and the District of Columbia, which have legalised marijuana in some form. Four of the states being Alaska, Washington, Oregon and Colorado have only legalised the drug for medical and recreational use only. The drug was pronounced illegal in the UK in 1925.

The request for legal production, sale and use of cannabis in the UK was closed by the Parliament earlier this year.

The petition argued in court last October that the legislation of the drug would bring in more tax money instead of falling into the hands of criminal organisations and would create more jobs.

The Government closed the petition using substantial scientific evidence to suggest it would address more harm to individuals and communities.

“I think it’s time cannabis was legalised in this country. It’s happening in all other parts of the world.”

A recent Facebook poll, suggests the public would rather see the cannabis drug legalised. When asked: ‘Should Cannabis be legalised in the UK?’, 37 per cent believed it should be legal to use for medicine and pain relief, 44 per cent of the poll result answered yes, leaving a small 19 per cent stating no.

This debate has been frequently in the news. Dr Stephen Kisely from the British Medical Association told the BBC back in 1999 his views on the drug since it has been trial to prove there are medical benefits.

Kisely stated: “We are not proposing that the corner shop should be able to sell marijuana to anyone who comes through the door, but neither are we promoting the blanket prohibition.”

Racial profiling is something Harris believes is still a current problem in the UK. He believes the legislation of cannabis will benefit the younger generation to prevent them from being stopped and searched where unnecessary.

Harris says: “Over the years so many young people, especially black youngsters have been penalised. They were stopped and searched, arrested, cannot travel, jobs with criminal conviction.  We have got to wipe the slates clear and no more punish people for simple possession of cannabis.”

In 2012 the Equality and Human Rights Commission reported how police use racial profiling as a method for ‘stop and search’.

They observed what is known as ’60 stops’ where police officers are able to carry out a stop and search without suspicion.

Covering the story was journalist Vikrum Dodd from The Guardian, he said how police forces are up to 28 times more likely to use stop and search powers against black people than white people. 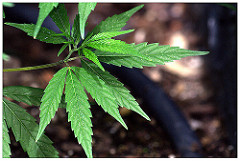 The UK Government declined to legalise the cannabis drug in the country during trial back in November last year.
Image by Manuel via Flickr.

The EHRC state “Our research shows black youths are still being disproportionately targeted, and without a clear explanation as to why, many in the community will see this as racial profiling.”

Harris then tells me how he has been a victim of the ‘War on Drugs’ himself which has only heightened his passion to fight the current laws.

“I had two trials where I had no cannabis near me or on me but I was done for cannabis charges. I have spent one-and-a-half days in Wormwood Scrubs [prison] after three months imprisonment.”

With his main focus on legalising cannabis, other policies are fragmentary. “We need to develop social housing and we need more gender equality. We need to respect London is changing.”

As I leave the Alchemy shop, I meet a life-long friend of Harris, he tells me how he is part of the Dread Broadcasting Corporation (DBC) Britain’s first black-owned radio station.

He is supporting Lee Harris on his conquest to change the laws of London, along with funding from the late owner of social media site Bebo and British Jamaican writer and dub poet, Benjamin Zephaniah.

So with Bebo and CISTA on his side, only London voters can decide now if it is the right time to turn to the high life.

“I got surprisingly good response when deciding to run for Mayor. I beat three other candidates and now I’m going to be standing opposite Sadiq Khan and Zac Goldsmith. I am backed by ‘Cannabis is safer than alcohol’, the guy who runs it sold Bebo for 500 million pounds so we have got a good back up who will support the campaign and we hope to draw attention to get it legalised.”