It was a policy created as a product of post-war. The UK needed restoring and its people needed rehousing. The decision to build state owned accommodation for the people was a much-welcomed policy for many who it would benefit.

At the time Lloyd George labeled them as being “Homes fit for heroes” moving people out of the ‘ghettos’ and into a more modern and innovative development- a much improved kind of housing. Today we see a very different side one that could not have been imagined.

“The housing crisis is the biggest challenge facing London today. Home ownership is out of reach for all but the very wealthiest, rents are rising fast and overcrowding is getting worse. London desperately needs more homes.”

Gentrification is on everybody’s minds at the moment. The prices of property in London are soaring, which means that fewer people are able to live here.

Many amongst us live in fear for their homes or are having to compromise their life comforts just to put somewhat of a roof over their head.

Uk Housing
Create your own infographics

For some, they see it at a strategy to move those considered ‘undesirable’ out and replace them with the highest bidders, finding them no longer able to afford the place in which they’ve lived their whole life. The poorer people are being removed from the inner city making space for the rich.

The other side of the argument is that the council is doing what’s in the best interests of local residents.

Making these so called ‘run down’ parts of the community a more appealing, pleasant place to live, which essentially means demolishing the old run down building, often social housing, and replacing them with modern sky-high glass towers in partnership with private companies whose biggest interest is increasing their capital.

The number of UK council houses has decreased despite the increase in demand. The population has risen by almost 1 million in the last 20 years.

With land being sold to private developers with big bucks, more members of the working class are being forced to fighting back.

One of the many neighbourhoods in London that is undergoing regeneration for some time is Elephant and Castle, which lies in the borough of Southwark.

In 2013 the council were accused of supporting social cleansing after it was found out that they had put two properties under auction which ended up being sold for a total of £3 million.

David Orr, the chief of the National Housing Federation said: “It’s interesting isn’t it, seeing the amount of luxury home developments, the developers who are building them make the most profit. From a local government point of view, if its on land that they own that’s the way they get the biggest capital receive.

“Local authorities in London and everywhere else in the country are under huge financial pressure its not a surprise that’s they want to make the bet use of their assets.”

For many this was seen as an easy way of making money, ignoring the crisis, which is the lack or affordable housing – not putting the people who are often the most vulnerable first.

“I do think its short sited though, you need good economic mix. London cannot afford to export a majority of people and become an enclave for the wealthy. It will no function if that’s the case.”

Artefact spoke to London design shop owner who gave us his opinion on gentrification in London. Aubrey seemed passionate to give an insight from the perspective of someone who had directly been affected by the results of gentrification, or the regeneration of London.

After being one of the many independent shops that you can fine on Holloway, North London for a decade, Aubery had first handedly seen the effects through his own eyes:

One of the most popular cases which created a large amount of is the on-going closure of the Heygate estate. The former estate, built in the 1970s was home to more than 3,000 people.

Although many saw this as a great improvement to the community, others have argued that this was highlighting the fact that the poorer members of the community were being treated unreasonably and really have no say.

Throughout the borough the skylines reveal the effects that regeneration is currently having and how two very different communities coexists in the same view.

On the one hand you can see the Elephant and Castle shopping centre, which is being closed for demolition as part of the £3 billion regeneration project in the area.

Despite not having the have the best appearance it contains a number of small local businesses which have been a part of the community for a number of years.

This is alongside a new private housing development The Elephant, which is set to be competed in 2016, which appears very modern and comes complete with a hotel style lobby and modern café.

However pleasant it may be there is a housing crisis but private redevelopment will forever favour unaffordable properties which neglects the real desperation and need for affordable housing.

This is an issue that is being reflected throughout London.

The council put up temporary barbed-wire fences to keep out those “squatting” despite there being a number or rightful tenants still living on the estate.

Parts of the wall, which had been described as the Berlin Wall, were later torn down as angry locals condemned the acts of the council.

Nobody should be forces to live in a cage but that what the council’s done pic.twitter.com/dstzbE2zIx

Aylesbury Estate had previously been in the media after being included in a Channel 4’s ident where a number of people including the residents had commented in the ‘unfair representation’.

Today you will find a very different sight on the grounds of previous Aylesbury Estate. One that’s is becoming a part of London’s ever-growing regeneration programme.

After the demolition of parts of the council homes company Lend Lease will be moving on and developing a total of 2,500 private apartments which will become part of “Elephant Park”.

Although there are claims of more affordable homes prices are high. There is no hope for the previous residents – many of which have been forced to relocate. 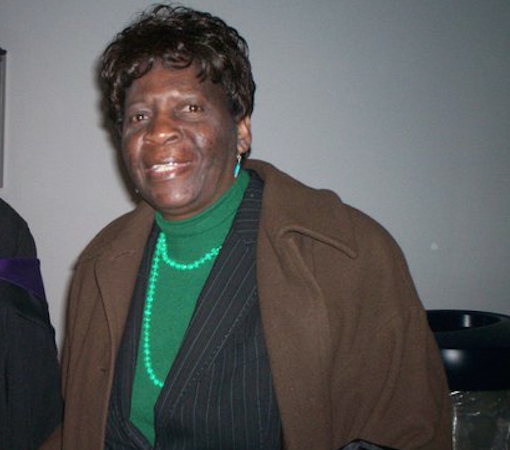 One of the former residents 65-year-old Ntombizod Sibanda spoke about her opinion of the program.

“We are all aware of the way Aylesbury is being represented and its wrong and its infuriating” She tells me.

The mother of two then went on to tell me “People would always speak as if they know what’s best for us without actually experiencing any on the same circumstances, trying to make it seem as it was a bad place for bad people when it’s not the case”

Ntombizod, originally from South Africa, moved to the estate in the summer of 2004. “Getting housing was hard but the struggle as worth it. Now I won’t be able to call this place (Elephant & Castle) my home and that makes extremely sad”

“I came from a family were who were stricken by poverty. After making the decision to move to the UK for a better life things progressed massively. This place is my home, but now it feels like another block in the road, one which seems a little harder to overcome.”

Many in the community are under the impression that the estate was abandoned and neglected despite this being avoidable; that it’s reputation was tarnished and became perpetuated by the media, and now the council choose to go ahead to scrap it all together.

However the developer Lend Lease released a statement on their website discussing their views of the developments going on within the borough of Southwark:

“Regeneration sits at the heart of our ambition to revitalise the borough. A wealth of positive change has already happened and there is plenty more to come. From Peckham, Nunhead and Camberwell to Walworth and Bermondsey spa, Southwark is undergoing a transformation unlike any other.”

“Developments such as Elephant Park will redefine what it means to live in central London – bringing the centre south – and opening up new opportunities for businesses and residents alike.”

Despite there being reasoning from each those who are for regeneration and those against it, Britain housing crisis seems to have increased.

The thirst for affordable housing is at its highest and numerous families are being left without an efficient place to live.

The crisis seems to be felt harder by those who are facing low wages and insufficient employment. What is left are campaigners such as Southwark Notes fighting for the right of fellow residents and for affordable housing.

“We are local people who aren’t particularly happy about what is going on in the name of ‘regeneration’. Take a look back at the ‘regeneration’ of Covent Garden, Wapping, Spitalfields, Shoreditch, Hoxton and take a look at what’s going on now in Hackney and Dalston.

“These have been disastrous for local people who want to keep decent council housing and the local community of open spaces and shops that goes with it.”