Empowering refugees one chai at a time

If you find yourself on a bustling railway platform or at a bus stop in India, you can hear the cries of street vendors shouting out “chai garam!” – a Hindi phrase meaning ‘hot tea’.

Sold by chaiwallas who serve chai out of their stalls or shops, the sweet smell of warm spiced chai infusing with the hot, dusty air is a vivid memory for those who have visited or traveled around India.

Tea drinking is a universal phenomenon – every country has its own distinct flavours and blends, ceremonial practices, and traditions. 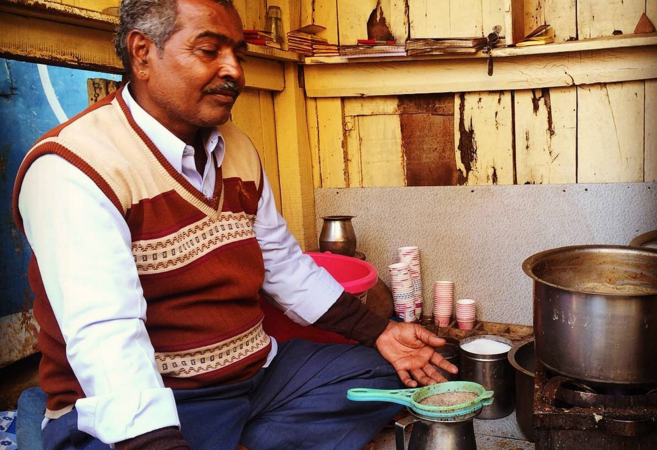 A chaiwalla meditating next to a brewing cup of chai.

Whether you’re partial to a cupful of Earl Grey, a fresh pot of Moroccan mint, or a mug of spiced Indian masala, tea drinking is a unifying experience which plays a central part in a lot of people’s lives.

The bonding process that happens when drinking tea, be it with your friends or strangers, is where the idea behind Chaigaram was born.

By selling high-quality fair trade traditional Indian chai, the team behind this tea-impassioned business want to bring people together in the spirit of creating a borderless society.

Chaigaram is no ordinary startup. It’s a social-purpose business providing employment to refugees and helping them integrate into London using the power of tea.

Every Saturday the team sets up a stall at Venn Street Market in Clapham Common and employs a refugee to serve and sell chai.

By introducing refugees to locals and helping them learn transferable skills, Chaigaram wants to put an end to the stigma surrounding refugees and show how much they have to offer.

Statistics from the UN Refugee Agency (UNHCR) state there are a total of 59.5 million refugees worldwide who have been displaced due to conflict or persecution.

[pullquote align=”right”]Facts like ‘UK refugees are six times less likely to be employed than the UK national average’ is something we are looking to change![/pullquote]

Developing countries host more than 86 per cent of the world’s refugees, while the UK houses an estimated 126,000 (0.19 per cent of the total) with pressure to expand numbers in the coming years.

Economic, social and political turmoil has displaced millions of people in recent years. Cities and towns have become melting pots of different cultures and communities, yet integration for those arriving in the UK remains a fierce challenge.

That’s why the Chaigaram team believe that everyone, regardless of whether they are fleeing economic hardship, persecution or war, deserves the opportunity to contribute to economic growth in their new homes.

Pranav Chopra, the founder and entrepreneur behind Chaigaram, firmly believes that everyone in the UK, regardless if they’re refugees or economic migrants, should get the same chances as Londoners when it comes to having decent quality of life. 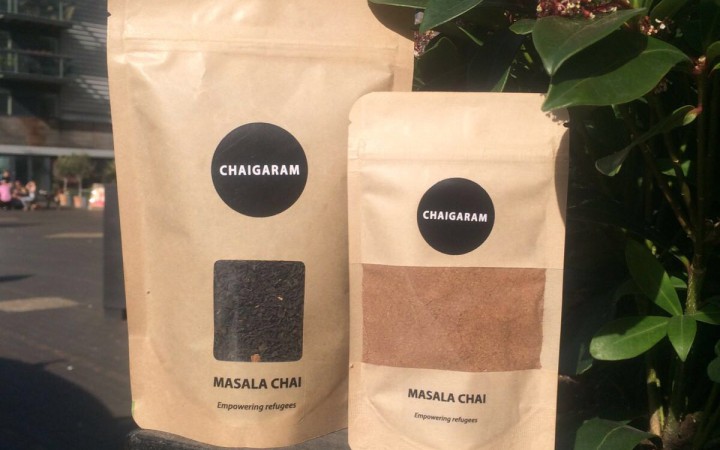 “As everyone I’ve been following the refugee crisis pretty closely and I came across an alarming statistic that 70 per cent of refugees are unemployed in the UK and that to me is surreal! So I decided to tackle that somehow and what keeps me going is the my belief of equality for all,” Pranav explains.

“I myself am a migrant to the UK from Australia and want to see equal opportunities for all. I have come across qualified refugees who are equally if not more capable than myself to contribute to society and they’re just not being given the opportunity to do so. It’s time for a change and I’ve just taken the first step in creating that change!”

“The refugees are involved in all aspects of the business. We trade through food markets and on a retail level. At food markets, they help brew and sell the masala chai helping them improve their communication skills and confidence. At a retail level, the refugees help create our tea blends – mixing, packing and delivering.”

“Eventually our plan is to have a social franchise of chai stalls set up all across the UK and internationally, giving refugees a chance to learn valuable skills and meet people in their local communities. We’re also aiming to sell regional teas and tea-ware, sell our produce through pop-ups and restaurants, offer tea-making classes, and set up tea shops across the UK which will be run and owned by refugees.” 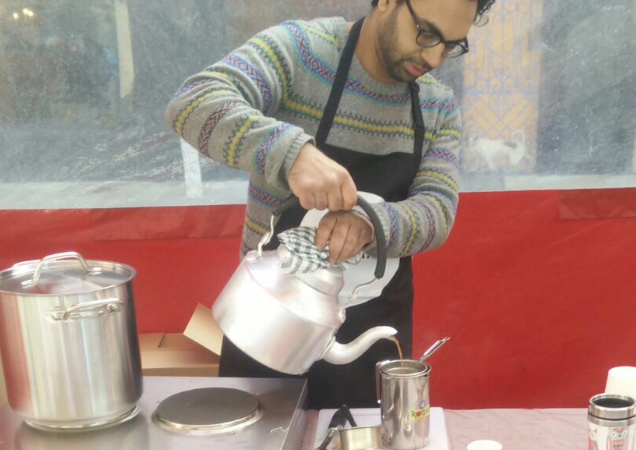 Pranav also explains how the refugees who help him run the market stall each tell incredible stories of hardship and hope.

“We employ a woman from Eritrea – she’s been in the country for 19 years and only got her papers last year – that’s basically half her life where she had to work illegally and was being paid £4-5 per hour which is unbelievable. But guess what, people have to live and we all would do such things to survive,” he says.

“We also work with a guy from Syria – he’s been here for two years and it took him two years to get to the UK! He crossed around eight countries on boats and by road to get to the UK. Infact he didn’t even know he had landed in the UK until he used his GPS to check where he was – unreal story.”

“Facts like ‘UK refugees are six times less likely to be employed than the UK national average’ is something we are looking to change,” he says.

“Other research as published in a London Enriched document reveals that the employment rate for refugees in London is less than 30 per cent – we want to break this cycle!”

“By involving refugees from the start, we will embrace the tea drinking cultures of their origin; growing and learning from and with them, and expanding our product line accordingly. In this way, we hope we will allow them to develop a sense of ownership over the product they will sell, and more broadly, enable them to regain some control over their lives.”

The simplicity and open mindedness of this social project is what makes Chaigaram such a unique and impactful business. After all, they’re just selling tea and water.

By proving to the world how easy it is to welcome refugees into communities and help them integrate and rebuild their lives, Chaigaram sets a valuable example to other startups and social enterprises.

The Chaigaram team are committed to making a difference with each passing week – and empowering refugees one chai at a time.

Find out more online at: http://chaigaram.org/ or on Twitter @chaigaramuk