Brixton: A change for better – or for worse?

If I asked you what you thought of Brixton, what would you say?

The truth is Brixton has had many different conceptions and livelihoods. As the years have gone by, Brixton has gained and lost status and reputation.

In recent decades it has been a symbol of Britain’s developing multicultural society. However, there’s no denying that right now Brixton is losing the identity that was once so strong it provoked visits from Nelson Mandela and Muhammad Ali.

June 22, 1948 is a significant date for multi-racial Britain: the steamship Empire Windrush docked in Tilbury and 492 Caribbean migrants were welcomed into Britain, at least to begin with.

The Second World War saw thousands of people from the West Indies recruited into the armed forces and many people took the opportunity to work in Britain and one day return to their home countries with money in their pockets.

Passengers who didn’t already have accommodation were advised to stay in a disused wartime underground shelter in Clapham South; the area had been badly bombed in the war, with a substantial number of houses flattened or beyond repair, resulting in a severe housing crisis.

Tensions ran high with locals and native Londoners, over who should receive what little housing could be allocated. Faced with racism and exclusion from society from the outset, many of the passengers found themselves in Brixton, one of the only places where anybody would rent a room to a black person.

From these beginnings, Brixton grew to become a focus of the West Indian community in Britain.

Racists wouldn’t dare try to come and intimidate us. They knew that we could fight and stand up for ourselves. I felt much safer in that community than outside it.

Brixton soon transformed to reflect the culture of its new residents. Clive Banton, who grew up in Brixton after his father moved to London in the 1950s, describes what the streets of Brixton were once like.

“From what I remember, it was a beautiful place to grow up, nobody locked their front doors and as a small kid I was in and out of neighbours’ houses all the time. Most West Indian people who lived at our end of the street owned their properties,” Clive told us.

However, Clive was always aware of the dark side of Brixton, and one wrong turn could place you among “pimps, prostitutes, gangsters and all manner of other strange and fascinating characters”.

Clive also touches on the close-knit community and how it gave him a feeling of safety. “As I was growing up, no one bothered me, because I was born on this road. Everyone knew my father. It might’ve been scary for others but it was normal for me. Racists wouldn’t dare try to come and intimidate us. They knew that we could fight and stand up for ourselves. I felt much safer in that community than outside it.”

I lived for the weekend when, dressed in our imitation silk shirts, Farah slacks and leather berets, our set would entertain a ‘ramjam’ crowd of reggae and lovers rock disciples.

Alex Wheatle, the black British novelist who grew up in Brixton, described the unique weekend and nightlife culture in an article in the Independent newspaper:

“Seduced by the raving, hustling and general excitement in Brixton, I soon lost a job opportunity I had with Lambeth Construction services. I was a member of a small sound system that we named Crucial Rocker. I lived for the weekend when, dressed in our imitation silk shirts, Farah slacks and leather berets, our set would entertain a ‘ramjam’ crowd of reggae and lovers rock disciples.

“For power, people would plug in their own generators. Someone would be dispatched to the alcohol cash’n’carry, and by midnight the neighbourhood would be rocking to the sounds of Dennis Brown, Gregory Isaacs, Sugar Minott and other reggae greats,” Alex says.

“People often talk about the police oppression and it was intense in that era. But if you loved reggae music and partying, there was no better place to be than London SW2 and SW9.”

To the outside world however, Brixton was not always seen in such fond light. The whole country was in a recession which hit the black community particularly hard.

Unemployment in Brixton was at an all time high, with two thirds of black men out of work. Crime rates, which are expected to rise in areas with high unemployment, were extremely high with half of all crimes recorded by the Brixton Division involving theft and robbery. 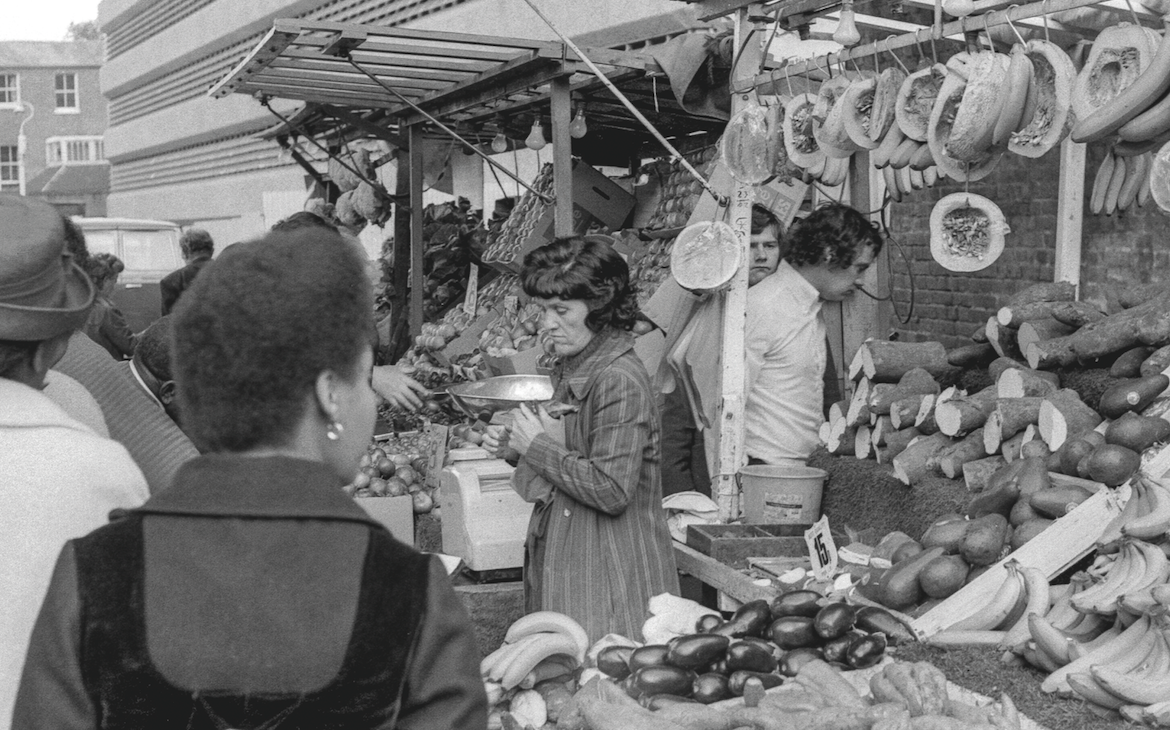 A vegetable stall in Brixton market.

This made Brixton the most crime-ridden borough, with crime numbers nearly double the closest figure behind. There was growing tension between the police and the local community, with complaints (which were subsequently supported by an independent enquiry) of heavy-handed and racist policing.

Brixton was officially a deprived area; it also carried a reputation of being plagued by hard drug use, with drugs being easily accessible.

People would come from all over London to Brixton to ‘score’ as the association was so high. Certain buildings would be seen as drug hubs, visited by hundreds of crack users each day.

Alex also touches on one of the issues that even to this day effects Brixton. “If you had the need to score weed, you would make your way past ramshackle terraced housing where the windows were covered by jagged corrugated sheets of metal. You would nod your greetings to the squatters who resided in those crumbling brick shells.”

Cordite was in the air, buildings were still smouldering. Alarm bells rang out everywhere. There was an occupation of police as far as the eye could see.

Squatting in Brixton began after the Second World War due to the housing crisis, and is still happening there and around the country to this present day. One of the most well known squats, council owned buildings, otherwise known as St Anges and the Rastafari temple, was first taken over in 1969.

Squatters successfully remained in the building despite a number of eviction attempts over the years. The squat finally came to an end in 2007 and both buildings have since been demolished.

Rushcroft Road was once a well known squat, running for over 30 years before coming to a violent end in 2013, when police forcefully evicted 75 residents. The central Brixton flats now cost £3,100 a month to rent.

April 11, 1981 marks the date of the infamous Brixton riots, otherwise known as ‘The Brixton Rising’.

Police presence on the streets of Brixton had risen dramatically in the days preceding the rising, with police using the right to stop and search ‘suspicious persons’ (also commonly known as the ‘SUS law’).

Within five days police had stopped more than 1,000 people, resulting in 83 arrests; black men felt they were being targeted as a result of racial profiling and anger at police treatment soon spread.

An arrest of a local, young black man resulted in the anger turning to violence as hundreds of people stormed the streets of Brixton, the situation soon spiralled into a riot.

Lesley Marshall who arrived in Brixton after moving from Jamaica when she was a young child recalls the devastation. “The next morning I walked down the Frontline in stunned silence – it was like bombs had flattened the whole area. Cordite was in the air, buildings were still smouldering. Alarm bells rang out everywhere. There was an occupation of police as far as the eye could see.”

Although there were no fatalities, nearly 300 police officers reported injuries, significantly higher than the 65 recorded civilian injuries; the damage was estimated at £7.5 million, including the burning of more than 50 police vehicles, 28 buildings and more than 100 properties looted and damaged.

A public inquiry into the riot headed by Lord Scarman, found “unquestionable evidence of the disproportionate and indiscriminate use of ‘stop and search’ powers by the police against black people”, deeming that the black community of Brixton had been wrongly profiled.

The inquiry resulted in a new code of police behaviour, the Police and Criminal Evidence Act 1984, alongside an independent police complaints authority, aimed to restore faith in the police by giving the public a platform to speak out.

When Mandela came to Brixton it was like he was coming home. We welcomed him like a brother.

However the streets of Brixton didn’t stay peaceful for long, just four years later riots erupted again. The riots of 1985 were the result of anger after a black woman was wrongfully shot in her home.

While not on the same scale as the 1981 riots, with only 43 civilians hurt and 10 police injured, this riot was equally significant for the Brixton residents to show their anger and resentment towards policing.

Brixton had an identity as the heart of the UK’s black community, at the centre of movements for civil rights, so what better place for Nelson Mandela to visit on his 1996 trip – the day of the visit was described as ‘the day Brixton was at its happiest’.

Brixton’s first black major, Lloyd Leon reflects: “When Mandela came to Brixton it was like he was coming home. We welcomed him like a brother. To see him in person was special, it made me so emotional. Here was an icon of struggle, a man who made freedom happen. At that time Brixton was the centre for black people in Britain. I can’t express what it meant to me personally and all the people I knew.”

Gentrification is a word being constantly thrown around, and no more so than when referring to London, but there’s no better word to describe what’s happening to Brixton.

An area so rich in cultural history and significance, it seems that the very essence of Brixton is being lost in the influx of all things gentrified. While Brixton may be losing one identity and forming another, it’s important to not forget the history at the heart of the area.