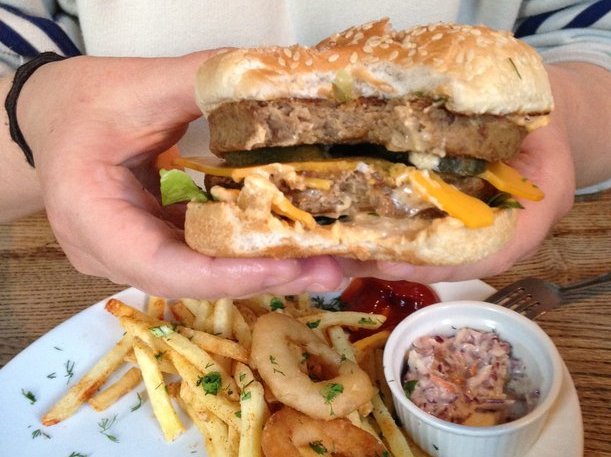 The vegan thing started partly because people wanted to be healthier. At first it seemed like some people were treating it as a bit of a “fad diet.”

Now, it’s gone into more than that and people are actively working towards saving animals. What about if you don’t want to harm any animals but you want to eat junk food? Look no further: I have found a place that doesn’t just serve you kale and quinoa!

Vegbar in Brixton is THE place to go for cruelty-free, “fish” and chips, wraps, burgers and whatever else you may fancy.

One thing that should be pointed out is the fact that this place is definitely NOT any kind of health food café, although some people may get picky about that and say that it’s healthier than a non-vegan restaurant of the same kind.

The price tag attached to Vegbar is, at first, acceptable. However, when you realise that it is essentially frozen “meat” patties and pre-made cheese, frozen fries and pretty much nothing homemade, you question paying £10.95 for a burger, fries and onion rings.

I mean, it’s extremely nice food that comes quickly and you feel like you’ve satisfied your junk food craving, but plot twist: you could make it at home for much less! But as an individual vegan restaurant, and one of the only in the area, people WILL pay, and it is definitely nice for a social outing. 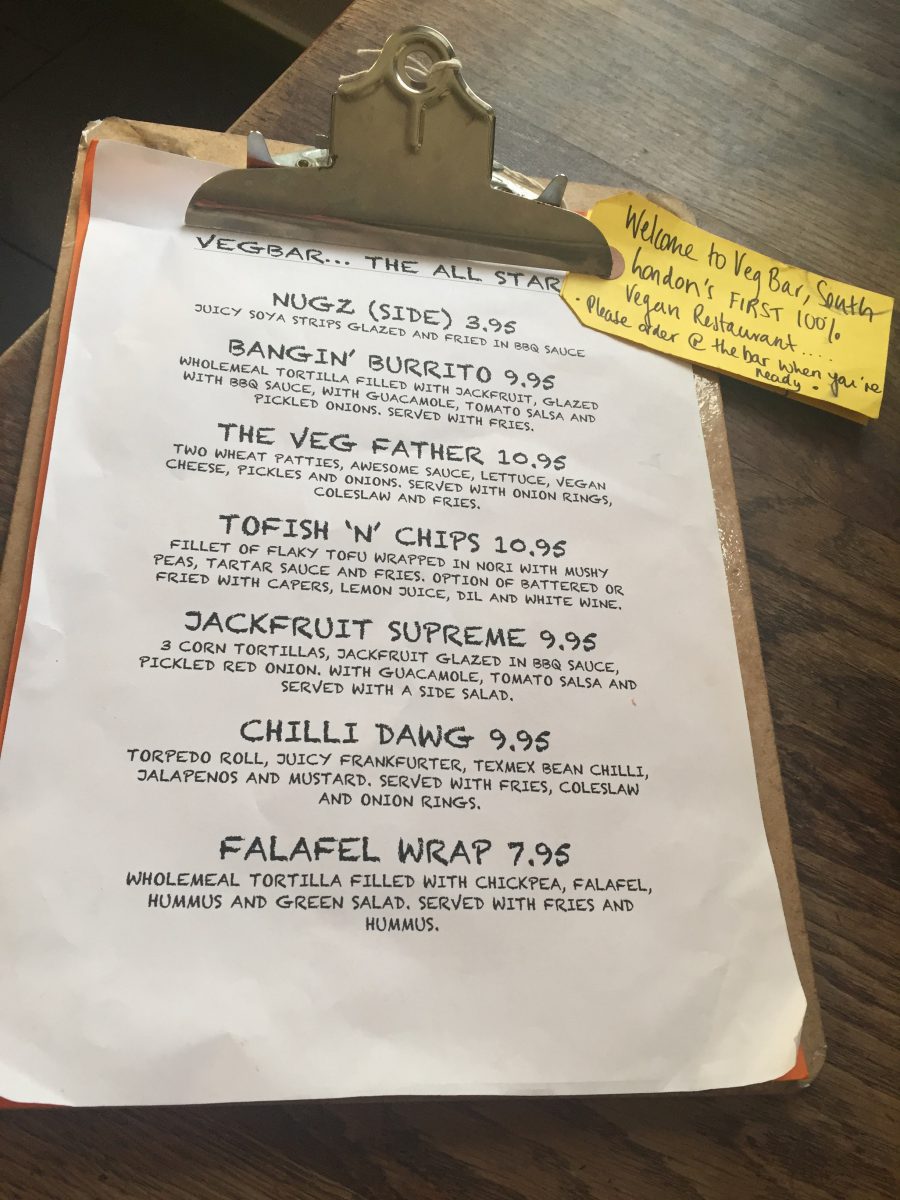 “all star” menu at Vegbar

We went at 5pm. Now I wasn’t expecting it to be bustling, but when we walked in there it was me, my friend and the staff there. When we were about to leave, more people turned up and that was nearing 6 o’clock. It’s definitely not a snack place, so I guess people were turning up for their evening meal.

The lady serving us was lovely, and although she spilt a bit of our coffee, she made us laugh about how it’s a myth that people manage to balance a tray with one hand (relatable). She and her colleague who was working at the till both didn’t seem like they were in a rush to serve us and seemed to genuinely care about us; wonderful customer service all round.

The menu itself was pretty sparse when we went. However, I later realised that the place had just re-
opened from a refurbishment so they had an “all
stars” menu featuring their most popular dishes.

“The veg father” was my choice – essentially a vegan “Big Mac”, like McDonald’s. It was pretty much identical to a McDonald’s one, maybe even nicer!

I’d highly recommend also ordering the “chicken” wings; someone next to us ordered them and we regretted not! They looked amazing and the sauce on them also smelt like a dream.

As for the décor – you can tell it’s been recently refurbished as everything is really clean. I think it’s part of the reason it feels so nice in there.

Overall, the vibe in Vegbar was really fun. The team made us feel really relaxed and valued by speaking to us about future menu changes, and there was a mix of music fit for everyone to enjoy, so you felt like you could be sat at home having a meal.

Sometimes in restaurants you can feel as though you don’t fit in or like you’re not welcome but that so wasn’t the case here. I’m definitely going again to check out more items on their usual menu – 10/10 would recommend!

All images by Chloe Smith.