The natural wonder of the Grand Canyon 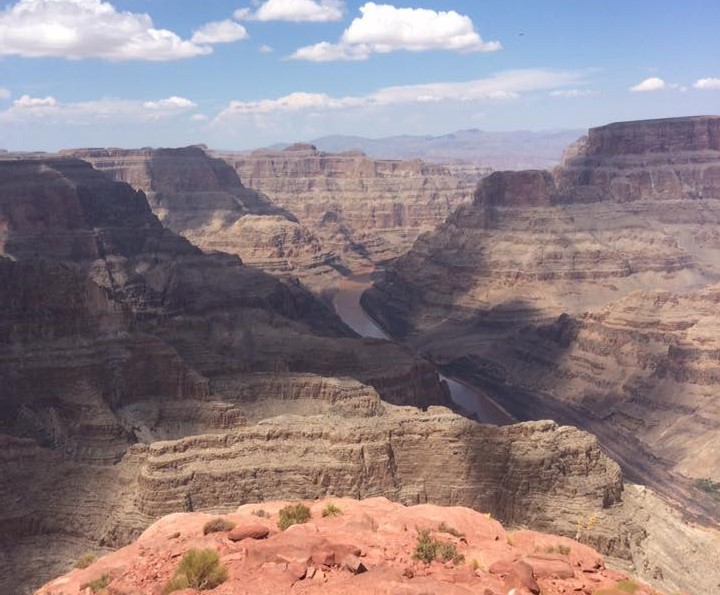 It’s 6:00am in Las Vegas, Nevada, and we are up bright and early, getting ready to start the first leg of our journey to the Grand Canyon.

We meet our tour guide across the road from our hotel, and he, like us, is enthusiastic and bursting with stories to tell us about Vegas and the Canyon.

He is filled with knowledge, having grown up in Nevada  and spent much of his childhood exploring the outdoors, he begins his storytelling as we set off into the desert.

Fuelled by a hearty American (McDonalds) breakfast of pancakes and sausage McMuffins, we arrive at our first destination around two hours later, we are raring to go.

When we arrive are told to sign some important paperwork and suncream up, as although it is only 8:00am, we are going to be in the depths of the Canyon under the midday sun.

Our first stop of our tour is the Grand Canyon Skywalk – essentially a glass bridge that’s built over the West rim of the Canyon, which allows you to see down into the depths of the gorge.

Stepping out onto the glass walkway, with ridiculous looking plastic covers over my feet (in order to protect the cleanliness of the glass) my pulse began to race at what felt like a million beats per minute. 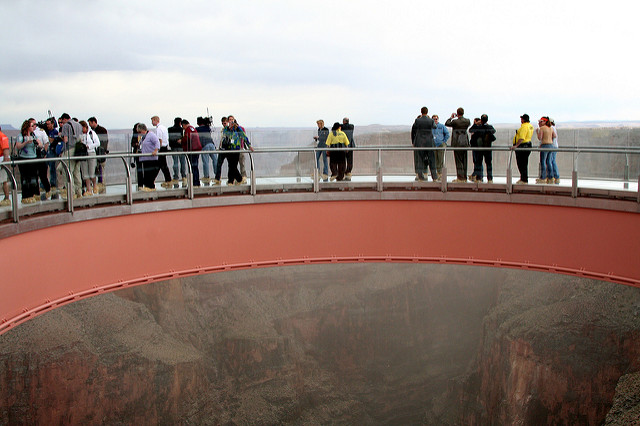 I felt weak at the knees and almost instantly wanted to turn back after taking one look at the ground far beneath me.

Now, I am not usually one to be scared of heights, but when you are 2,000 feet above the Grand Canyon with a crystal clear view of it, it is pretty petrifying.

I thought that the more time I spent on the Skywalk the easier it would get but the truth is I could still feel butterflies all the time.

Every step I took across the glass made me feel a bit nauseated, but at the same time I felt an extreme rush of adrenaline, as I witnessed the breathtaking sight beneath me, and afterwards, a sense of pride that I had stayed on the viewing platform despite my fears.

Much to our disappointment, cameras were not allowed on the Skywalk, which means the only way to get photographs of it/on it, is to pay the (pretty pricey) fee for the professional photos taken by the photographers who work there.

The companies are pretty strict about this too so there is no point trying to smuggle your camera or smartphone in to take photographs on, as you will just be sent back to put it away.

Tour of the Indian Village

Our second port of call is a tour of the Indian village, but first we stop at the edge of the canyon’s steep sides, and we are given a first taste of witnessing the true depth of the Canyon; without a layer of glass separating us.

Just a few feet away from us is a 4,000 feet drop, all of us are stood in awe, as we soak up the views in front of us. A loss of balance could send us tumbling over the edge if we were to stand a few steps closer, but of course we are careful to maintain a safe distance. 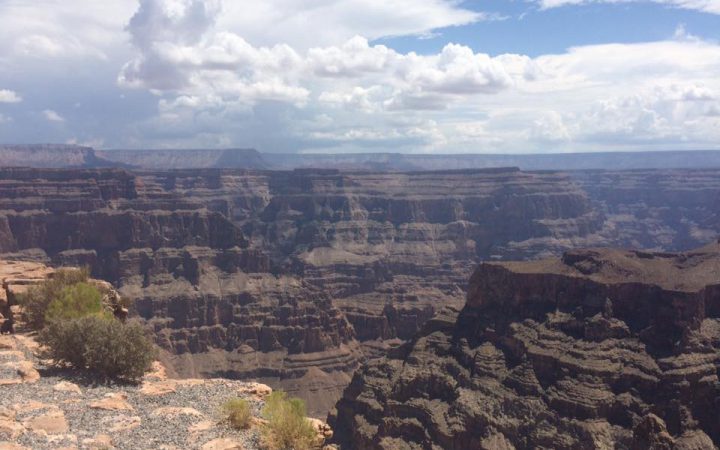 Our first stop at the edge of the Canyon

Seeing these views in person is a truly unique experience, and one you need to witness firsthand ”it just doesn’t look as good in the photos” my friend said to me, and I agreed.

The photos, while still stunning, just don’t do it justice. 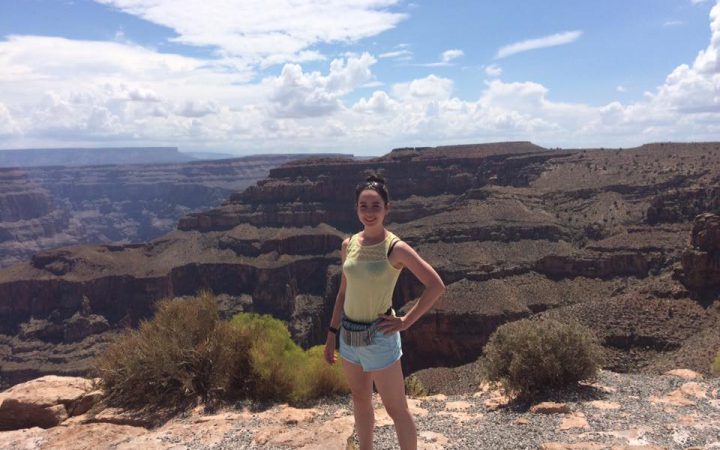 Posing in front of the Grand Canyon

After our first stop, our tour guide took us on an Indian village tour, which is located in the West rim of the Canyon.

This part of the Canyon is rich with Native American history and used to be inhabited by the Hualapai Indian tribe.

The Hualapai, which means “People of The Tall Pines”, are native people of the Southwest.

Traditionally hunter-gatherers, they inhabited an area of more than five million acres – which is roughly the same size as Wales.

Today the tribe has about 2,300 members, whose headquarters exists on Peach Springs on Highway 66, where they operate a hotel lodge and other tourist attractions, which is also how they generate their main income.

Our tour guide told [and showed] us various different huts and shelters that the Hualapai used to spend their time in such as wooden/mud huts and caves.

He also showed us a variety of different plants that the Hulalapai would graze on to help give them energy such as the yucca plant. 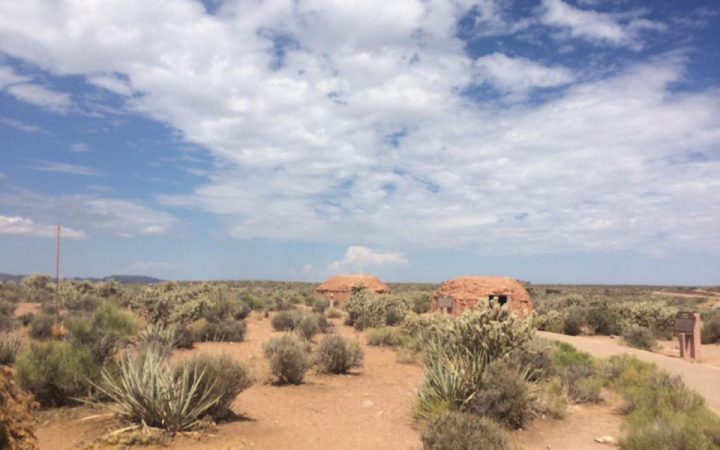 A variety of different plant life on the Grand Canyon

We continue our hike up to Guarno point, which is where we eventually stop for a picnic lunch while taking refuge under the shade of a double floor wooden hut, before heading back down the Canyon to the shuttle bus.

The trail is not very difficult to walk up as it is paved, but sometimes elevated. Tourists regularly take this route when exploring the Canyon.

It is however, extremely hot, and between us we have gone through a fair few litres of water to keep us hydrated.

There are also several elevation points which provide some excellent photo opportunities.

Luckily our tour guide knew all the right angles to capture the photos from, after having many years experience of touring people round the Canyon.

Our last stop of the day is at the Hoover Dam, which is located in Black Canyon, just outside Las Vegas.

The Hoover Dam is a National Historic Landmark, and is the highest concrete dam in the Western Hemisphere, standing at more than 725 feet above the Colorado River.

Named after America’s 31st President Herbert Hoover (who played a large role in bringing the nearby states into agreement about water allocations), the dam was built in 1936, but construction began in 1931 under some harsh working conditions.

Visitors now have access to drive to this bridge and see the dam from a high vantage point.

Located about 1,500 feet south of the Hoover Dam, the walkway on the bridge is approximately 900 feet above the Colorado River.

Unfortunately I didn’t make it up to the top of the walkway, as myself and some of the rest of our group were absolutely exhausted after the long day we had spent out at the Grand Canyon.

Much of our energy had gone due to heat exhaustion, and by this point the sun was stupidly hot causing our sun cream to drip down our faces. 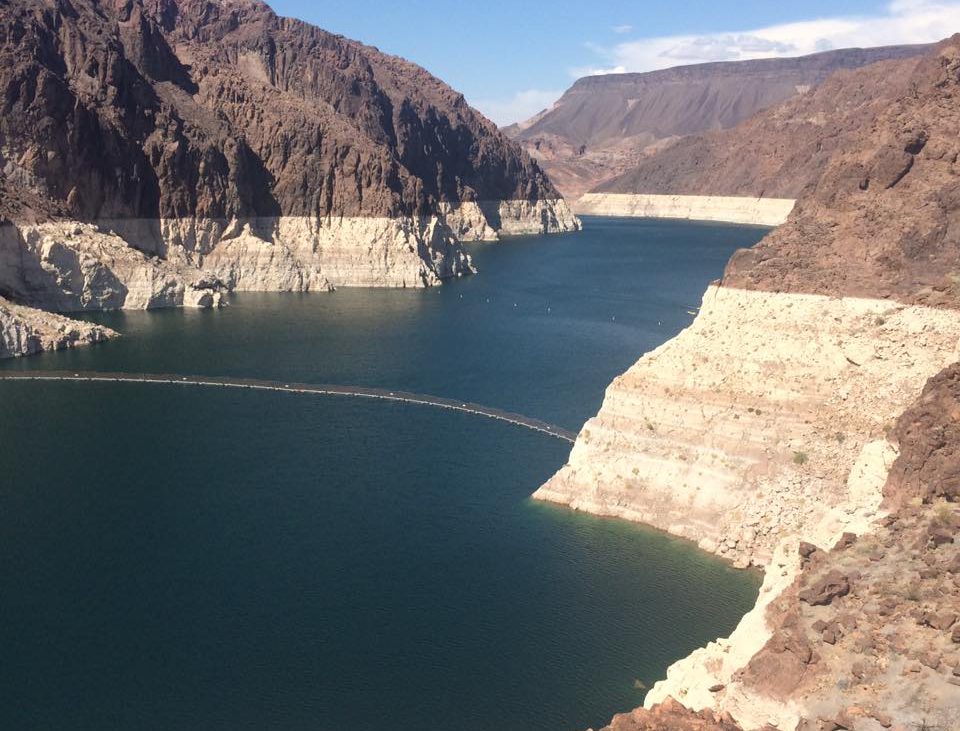 But we did however get to view Lake Mead, which is the country’s largest man-made reservoir, and also other members of the group shared the photographs that they had taken from the viewing point.

Overall, I had a thoroughly enjoyable and exhilarating experience at the Grand Canyon.

Visiting a natural wonder of the world is one I will never ever forget, and I would highly recommend taking a trip out there if you happen to visit Las Vegas in the future.

Tours can be taken either by helicopter or by walking like we did, but I would suggest the latter if you want to get a true up close and personal view of the Canyon.

The tour company featured is Grand Adventures Tours (who made our trip highly memorable and worthwhile) – details can be found here.