A recent report from Pew Research Center highlights Italy as the least Islam-friendly country in Europe, whereas France has the highest percentage of people with a favourable view of Muslims.

According to a group of academics, including Italian lawyer Luisa Ferrari, Italy’s Islamophobia lays roots in its historical foundations; the influence of the Church of Rome and the lack of proper education in most parts of the peninsula.

With the rise of nationalist and populist movements around the globe, sentiments of fear and hate towards anything that is different have sprung up across many countries.

In the United Kingdom, the Brexit result after the referendum of June has shown that a section of the British population want to be in charge of their borders again and to reduce migration from outside.

Donald Trump’s election in the US has been triggered by the same complaints as Brexiters: a big chunk of population wants to give jobs back to Americans rather than seeing them taken by migrants.

In this climate of hate and populism, Italy has been in the crossfire of Islamophobic sentiments as the Italian government passes new laws to protect Italian citizens against migrants, bans mosques from being built and close active ones.

Italy’s government is also holding a referendum that may further steer policies about migrants.

According to a study by Nicola  Montagna  and  Jon  Mulholland  from Middlesex  University, in Italy and the United Kingdom, Islam is the second largest religion by affiliates and population.

In Italy there are around 1.2 million Muslims out of a population of 60 million, whilst the United Kingdom accounts for roughly double the amount in a country of 64 million people.

“In both countries, the Muslim population is the most disadvantaged, socially excluded and discriminated section of the population,” says Montagna and Mulholland’s report.

“They are often disproportionately represented in social housing, more likely to be employed in low skilled and low paid employment, and have above average levels of unemployment and below average levels of educational achievement.”

[pullquote align=”right”]“Islamophobia is understood to be rarely about faith, but rather ethno-cultural practices associated with those affiliated to the faith.”[/pullquote]The study – conducted after the Charlie Hebdo shootings in Paris – claims that “more than 50 per cent of Italians and Poles have a negative view of Muslims”.

Italy is therefore not the only country seeing a rise in islamophobia. At the same time, Italy and Poland share the highest sentiment of hate in Europe towards other religious beliefs such as Hebraism.

“Anti-Semitism is also high in both countries, with one in five Italians and one in four Poles viewing Jews unfavourably. In contrast, less than one in ten French and British people expressed similar views,” Conor Gaffey wrote in a piece for Newsweek.

After the attacks in Paris and Belgium, islamophobia has quickly become a talking point.

However, according to the Pew Research Center findings, France and Belgium, which are the countries most affected by the ISIL/Da’esh terrorist attacks, still have a favourable view of Muslims.

Italy, on the other hand, is historically rooted in a hatred of what’s different.

“Islamophobia in Italy lays its roots in historical and social issues and it derives from the fact that, in my country, islamic and muslim communities have never been deeply-rooted nor numerically relevant,” says Luisa Ferrari, a lawyer focusing on cases involving Islam.

“Historically speaking, Italy has never been a country influenced or a destination of migratory flows. The outer communities that have laid their roots in Italy have different origins than the Middle-East, like the Balkans, the East of Europe, Asia and South America,” she told Artefact.

“On the other hand, France and Belgium have been destinations of migrational phenomena, particularly of Muslim religion for a very long time. As a consequence, the integration process is consolidated and accepted in these countries. France and Belgium have proved to have a much deeper integration and knowledge of such cultures and religions throughout the years,” she says.

The terroristic attacks that the world has recently experienced have had the power to suppress the common idea that all Muslim countries have a moderate side.

“The western countries most impenetrable to immigration,” explained Ferrari, “have played a pivotal role in bringing back the perception of Islam and its culture to extreme concepts, especially negative ones, overlooking its most moderate aspects.”

Why exactly does Italy appear to be the most islamophobic country in Europe? Investigations throughout its roots and history may suggest some reasons.

According to Lusia Ferrari, such issues might find a cause in the last twenty years.

“In Italy, migratory fluxes from muslim populations are quite a recent phenomenon. It has become of public interest in the recent years, in conjunction with the most acute phase of the islamic terrorism,” she told us.

“Public opinion has been worldwide touched by the terroristic threat, but in Italy it has converged with the perception of the many migratory flows from the Middle-East and North-Africa. There is no actual proof, however, that any migratory flux and the islamic terrorism are related in any way.”

Italy, nonetheless, is a country not used to such flows and the temporal connection between the two phenomena has played a crucial role in the perception of Islam among Italians.

How much can Italy’s islamophobia be justified by the recent migratory waves from the Middle East?

Ferrari thinks that this has happened in the last 15 years: “Since the rise of Osama Bin Laden, to the tragic episodes of 2016, have created fear and mistrust in societies during the process of integration, with a special look at the muslim culture. The latter has therefore never been entirely assimilated with the Italian culture.” 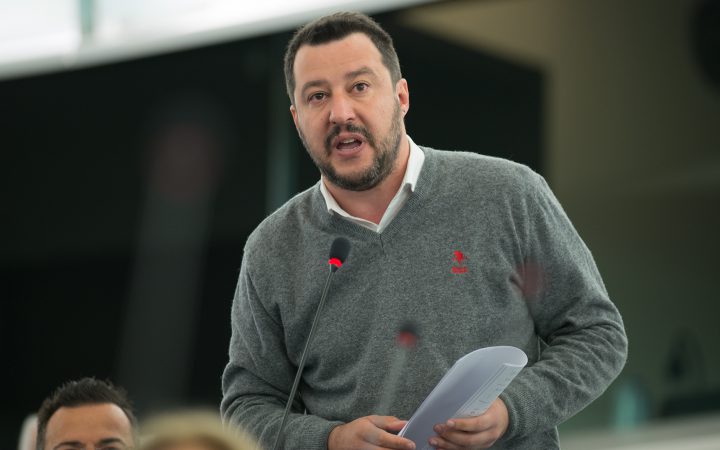 Xenophobia has been a rising sentiment across all Europe. When uncertainty spreads across a union of more countries, nationalists parties rise to take advantage of this.

It is the case of Italy and France, where political parties with a populist and racist matrix such as La Lega with Matteo Salvini and Front National with Marine Le Pen, have risen among the political line-up in order to sustain and support the hatred that some people of both countries feel.

It might also be the case that views about Muslims and Islam could therefore be tied to political ideologies: “While 47 per cent of Germans on the political right give Muslims an unfavorable rating, just 17 per cent on the left do so. The gap between left and right is also roughly 30 percentage points in Italy and Greece,” Pew Reasearch Center reported.

Despite what the statistics suggest, when asked about the role of any extremist party in Europe and the spread of islamophobia, Luisa Ferrari expressed a much more moderate opinion.

“I think that any political party, be it right or left-wing and be it extremist will never contribute in the development of a multiethnic and more tolerant society of any cultural difference with any given country.”

Social uncertainty between different religions and cultures, however, often derives from economical uncertainty. Italy, more than any other country in Europe, has been affected by the 2008 financial crisis.

As highlighted by the independent online newspaper EU Observer: “The economic downturn has led to a rise in discrimination, racism and xenophobia in Europe, particularly in EU countries such as Italy, Slovakia and Hungary.”

The latest Amnesty International report on human rights also shows the growing trend of racism, linked to the effects of the 2008 banking crisis, that has affected Italy more than other European countries.

“The marginalisation was heightened in 2009 by fears of the economic downturn, and accompanied in many countries by a sharp rise in racism and hate speech in public discourse,” the report says.

Italy is specially highlighted as the nation which, in the aftermath of the financial crisis, “passed new legislation as part of a security package establishing as a criminal offence ‘irregular migration’, which would deter irregular migrants from accessing education and medical care for fear of being reported to the police,” the EU Observer reports.

Economic challenges might therefore be at the centre of the reasons why Italy, together with Greece and Spain, is one of the less islamic-friendly countries in the EU.

What is, then, the role and the fault of the European Union in the spread of islamophobia?

Luisa Ferrari is clear on this: “The political potential of a united EU is indisputable. The Union, however, has yet to demonstrate a concrete answer to the problems of xenophobia that affect the social tissue.”

By Alexandra Andronache
9 Mins read
How Muslim women living in the UK are working together to tackle Islamophobia and sexism.
NewsdayPolitics

By Jayden Galata
4 Mins read
How the cost of living is affecting students across the UK and how they’ve been dealing with it.
News

By Will Drysdale
8 Mins read
We spoke to MP Sir Roger Gale about the humanitarian crisis unfolding in Europe, and a new scheme to host Ukrainian refugees.