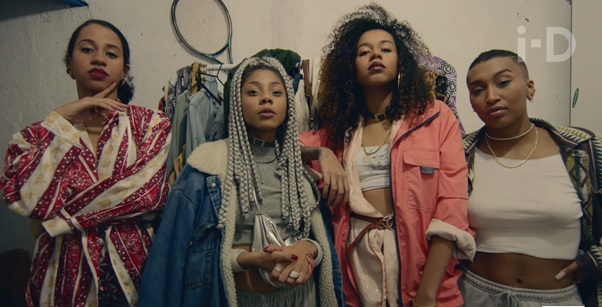 Grace Neutral, a reporter for i-D magazine has documented a series called Beyond Beauty which challenges beauty ideals in Brazil.

The second part of the series, Inside Brazil’s Favelas and the Rise of the New Afro Hair Movement, showcases young black women redefining beauty ideas in Sao Paulo, as well challenging racial discrimination through a focus on black hair, style, music and culture.

Samba dancer and former beauty queen Nayara Justino, 27, was stripped of her crown for being too dark – she was voted Globelza carnival queen in 2013 but was later replaced by a lighter-skinned woman.

The episode allows Justino to tell her story and share her difficulties on being a dark-skinned woman living in Brazil.

The ability to show her real emotions gives the audience a sense of realism and illustrates how colourism affects a person’s self-esteem.

In the eyes of society Brazil obtains and portrays the image of a country that is proud of its multiracial and multicultural society.

That’s the vibe we as non-Brazilians get from the colourful carnival, or even the recent Olympics in Rio.

However, that’s not the reality.

Justino was discriminated because of her skin; the very skin that contributes to this multiracial society.

It is evident that centuries of meshing of race and culture cannot obscure the cracks within the society.

The ‘Brazilian blow-dry’ and blowout are worldwide marvels. These keratin-based treatments aim to straighten and manipulate the hair.

Nayara explains the difference between natural hair and relaxed hair and what being natural means to her. “When you straighten your hair, when you put chemicals in it, you end up a slave to it and the freedom that natural hair brings, I wouldn’t swap it for anything.”

The episode highlights how Afro-Brazilian women such as Nayara are important, positive role models for young black girls, as it encourages and liberates them to do the same and find the essence of their blackness through the movement.

Though it is unfortunate that a population who make up the majority have to find their blackness through a movement.

“Right now we are looking to find our identity as black women, so we get inspiration from our history,” says Tracie.

Tasha feels strongly about the movement as she comments: “We are reclaiming what’s ours”.

The episode highlights not only hair but other scenes that the younger generations dominate.

This shows how these alternative small scenes interlink and represent blackness for these youths. Additionally, it illustrates the importance of self-education, social awareness, self-love, and acceptance.

As the twins tell Grace, you cannot solely depend on mainstream school teaching because they do not teach black history.

They say it’s important to go on a self-discovery journey to find your identity.

Even though Grace explored the hair movement and had a range of women of colour with varieties of hairstyles, there were not enough scenes of women getting their hair done.

I think that showing the process of women styling their hair would have been a significant part of the documentary – showing audiences the versatility of black hair, especially if they are unfamiliar with the culture and communities.

It would also show the huge bond black women have with their hair, how liberating it is and why the movement was created.

It is extremely heart-warming that a person outside of the black community is interested in the culture.

However, black people themselves should be producing content like this and explore their own culture and bring it to the forefront.

They would have brought something different to the table. Black reporters should be able to control the narrative when discussing their community.

Nonetheless, Brazil’s bittersweet history has impacted its society and while there may be a lack of acceptance of African heritage, the footprints of Africa lingers and is ingrained in the soil and movements of Brazil.

Whether it is embraced or not, Africa lives in the identity of Brazil and movements will continue to grow.

Featured image is a screenshot from  i-D magazine video.