Tucked in between the hustle and bustle of France, the cultural hub that is Germany and medieval Belgium, Luxembourg, at first glance, will barely make you look at it twice.

As a landlocked country, and one that boasts merely half a million inhabitants in total, it’s fair to say that they have more trees than they do actual people.

Prior to arrival, I assumed that once my friend and I landed, it would just be us and, if we’re lucky, some tumble weed would be blowing across. 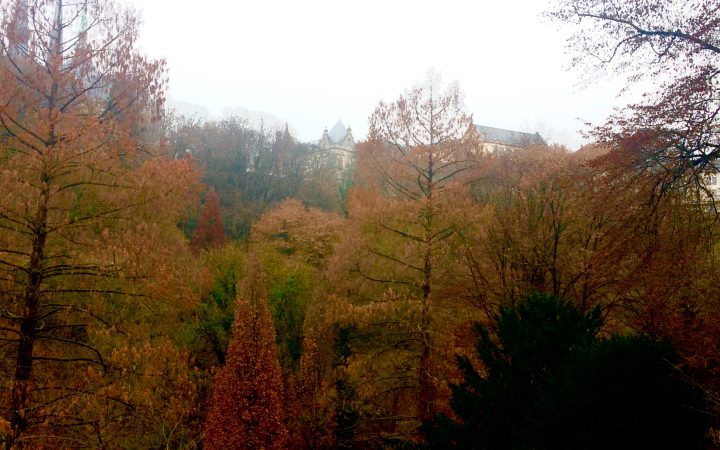 Petrusse Park in Luxembourg City is a scene of natural beauty.

This would be the first sign in a horror movie that you should probably leave.

It didn’t exactly help that Google Maps has not updated Luxembourg’s roads since 2009.

As far as I knew, the hotel would still be under construction and those restaurants may now be a scrap yard.

It was a bit of a cultural shock: the citizens speak a lot of languages – one of the staff at our hotel spoke five.

He told us that the main language is Luxembourgish, followed by French, German, Dutch and English.

In other words, if you’re from Western Europe and want to go to Luxembourg, you’re covered in terms of being able to communicate with the people there.

The capital, creatively named Luxembourg City, only has a population of just over 100,000 so if you feel like you’re seeing the same people all the time, it’s not the cold air making you delusional, it’s just ridiculously small.

In fact, it’s so small that you feel like a local by the end of your first day.

You know the names of roads nearby and could probably tell a fellow tourist where to go.

It’s size does have it’s advantages and disadvantages. 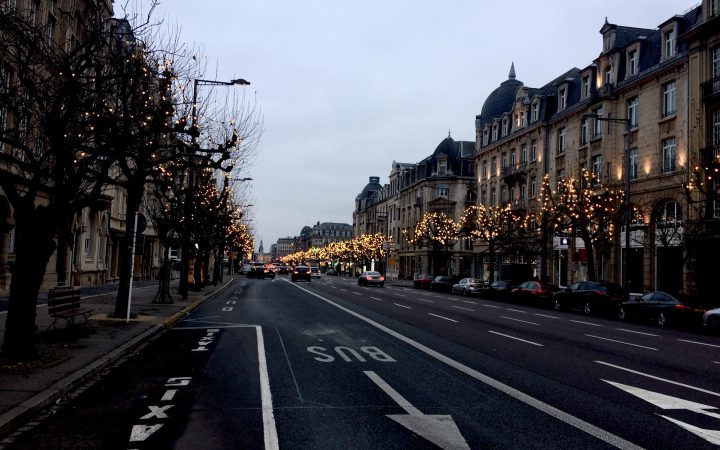 The airport is less than a 30 minute ride from the city centre so if you’re staying there, you don’t need to worry about waking up early to catch your flight.

You can catch the number 16 bus to get to the centre – it stops right in front of the airport entrance so it’s hard to miss.

And if you’re travelling on a Saturday the bus is free, which is always a bonus.

It also means you probably won’t get lost because even when you think you are, you recognise the same road you walked past for the fifth time.

No really, we tried to get lost but somehow found ourselves back at the hotel.

But that’s also the disadvantage – unless you go out of the city, you see the same streets all the time and you can easily see the whole city in a day.

Due to the city’s size and beautiful, though repetitive scenery, by foot is the best way to appreciate it.

You find places that you probably would not have come across had you gone by public transport.

So, if you’re looking for something to freshen up your Instagram feed and are fed up with the different angles of the Eiffel Tower or the multiple recreations of the Leaning Tower of Pisa, here is your scenic go-to guide of Luxembourg City: 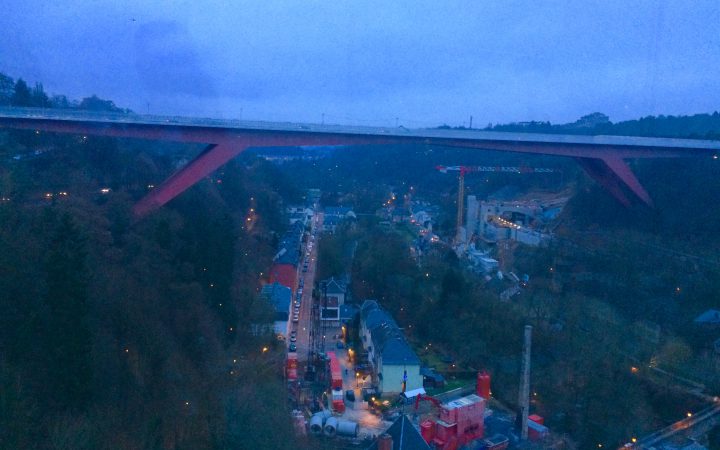 The Grand Duchess Charlotte Bridge is probably best admired from a distance as it’s currently under construction and you can’t enjoy the views of Luxembourg from it, unless you’re okay with viewing it from a small gap in a fence.

The magic of the city is best explored underneath it as you get to witness all of what makes Luxembourg such a tight-knit community.

Strangely enough, Ascenseur de Pfaffenthal was not recommended on any of the travel guides.

This is the real go to place out of all of Luxembourg City mainly because of the incredible views.

It gives you the most scenic and breath-taking perspective of the city.

It is essentially a walk way, roughly a quarter length of the aforementioned Charlotte Bridge.

You can take in the view of the mountains that are in the distance and after take a lift down to the small streets and walkways nearby to get a real sense of Luxembourg life. 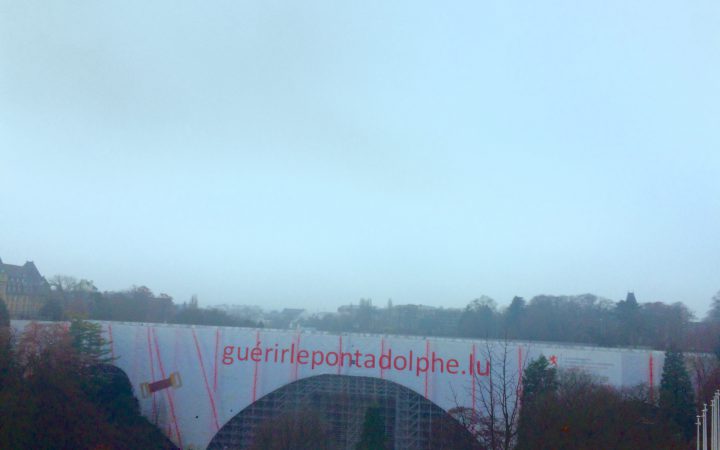 Although currently under construction, you will walk across Adolphe Bridge more than you would like because it connects you to rest of the city.

Planted in the centre of Petrusse Park, admire its architecture from a distance or go down and under it.

Though maybe wait until the end of its construction to get that postcard-worthy view. 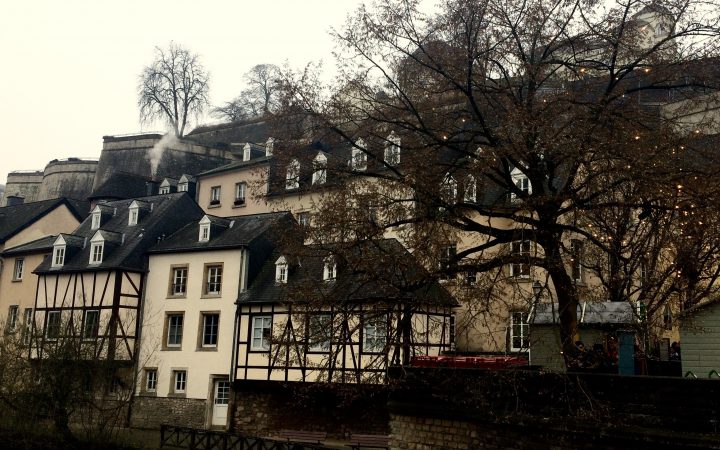 Views from Old City of Luxembourg, situated on top of the Alzette River

The views from Old City, which sits on the Alzette River, scream Amsterdam – all that’s missing is a couple of bikes.

But what makes this different is the homely feel and the place to go if you want to escape the slightly busier city centre.

A 15 minute walk from here will lead you viewpoints that offer you the best of Luxembourg.

For the people of Luxembourg, Place D’Armes is more than just a shopping or food hub.

It actually has its roots in 1944, when American troops arrived in the square and signalled the liberation of the country.

But for tourists, its the perfect place to get lost in the cuisine of Mexico, Turkey, France or even … McDonald’s.

The square has anything and everything to satisfy your food cravings. 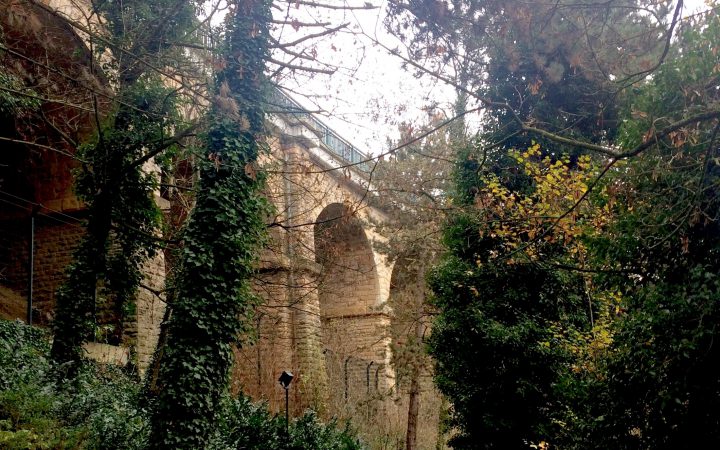 A viaduct is often found crossing a valley and this particular one is found in Petrusse Park.

It runs from the south into the city centre, connecting Avenue de la Gare to Boulevard Franklin Delano Roosevelt.

It provides incredible views from above, but it’s once you get underneath that you can fully appreciate its intrinsic architecture in detail. 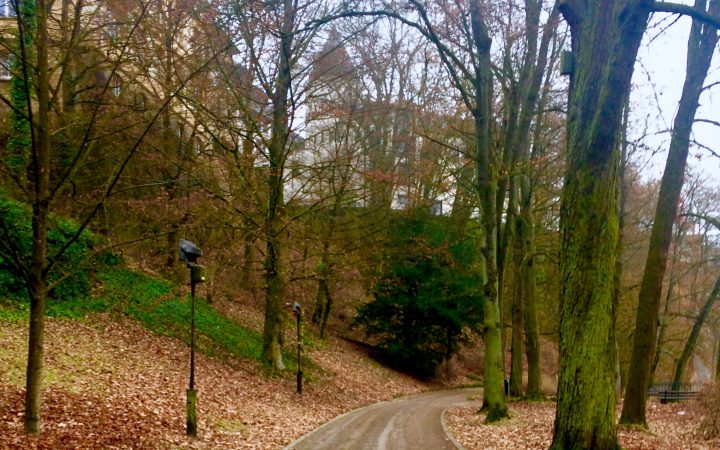 A path in Petrusse Park

The tranquil Petrusse Park is the epitome of calm.

Surrounded by trees on every corner, it’s very much more of a forest.

As their parks are situated under their numerous bridges, you don’t need to deal with car noises or pollution.

It’s just you and hundreds of trees.

We went on a Saturday and it was oddly quiet with barely anyone there but it is incredibly scenic and over the course of a day you can walk all around it.

A day trip to Luxembourg would suffice, even a weekend would be a stretch but as long as you spread your sightseeing across your time there, it makes for a great country escape.

You should go to Luxembourg if you need a day trip away from the craziness of a capital like London.

Never does it feel like it ditches its roots or tries to become the next Paris or Berlin.

But it’s only when you’re walking in busy Oxford Street that suddenly the serene Luxembourg sounds like a dream you took for granted and you would do anything to relive.

Barcelona as a marketing brand