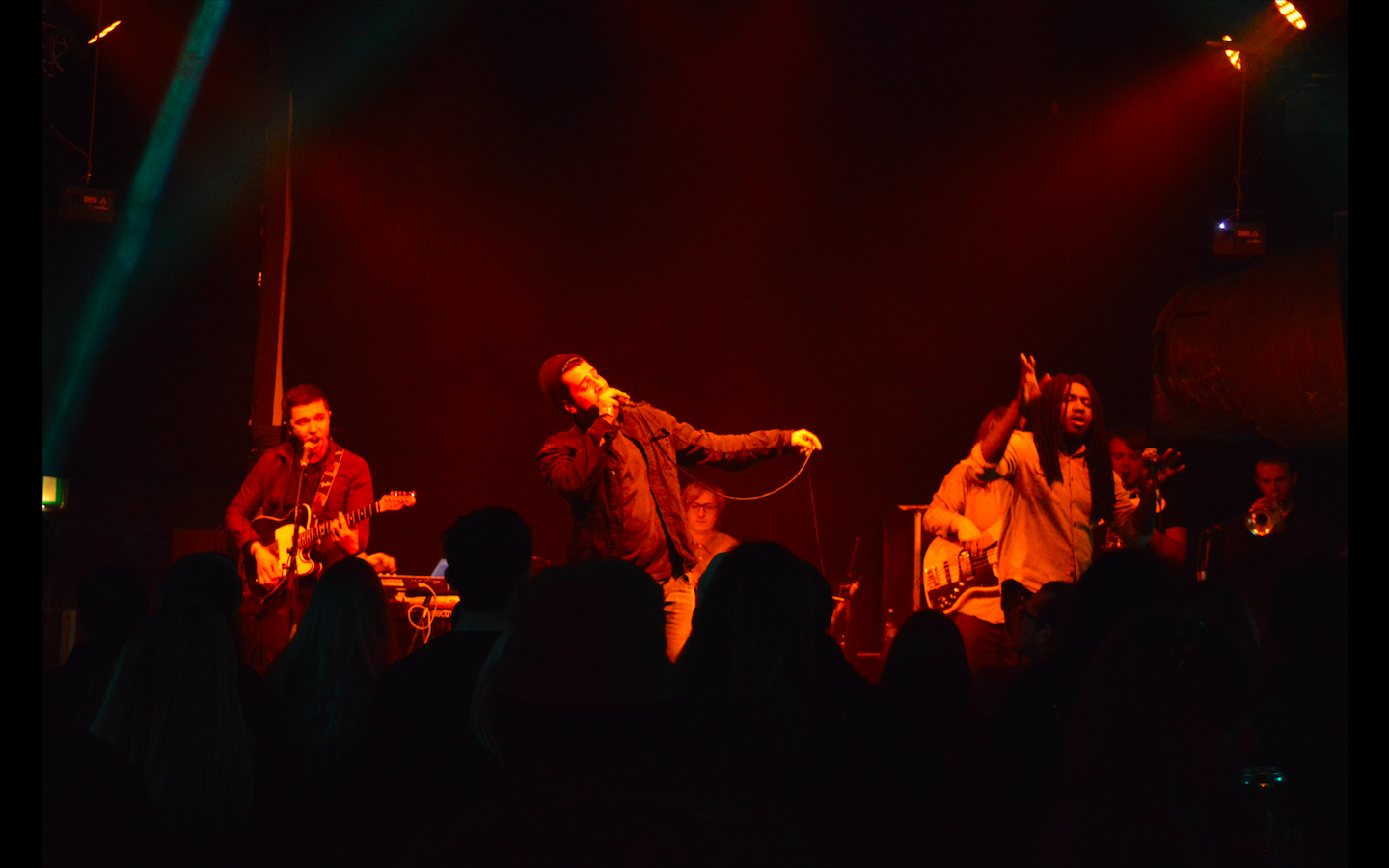 Anyone who lives in London, just knows the East of the city is the place to be if you’re looking for something fun to do at any point of the week.

On the 23rd of January, a group of us trudged up from Chiswick, to discover dozens of people jamming to emerging UK artists on a Monday night at Cargo, in Shoreditch.

Aside from appreciating music, everyone was also there to be a part of good cause.

Guests were asked to purchase the magazine of The Big Issue Foundation, a financially independent UK-based charity that aids support to vendors who are trying to challenge the reality of homelessness everyday.

With support from By the Rivers and Ayishat Akanbi, the evolving northwest English band Shanty took the stage from 10PM onwards.

Shanty’s music aesthetic is unique because their style is derived from a combination of classic reggae, dub-wise bass and their own contemporary twist. An unusual but attractive mix.

Their waterfalls of melodies pour from a range of instruments, such as guitars, drums, trumpets and a keyboard.

This nine-member band captured everyone’s attention the second they hit their first note in flawless synchronisation. 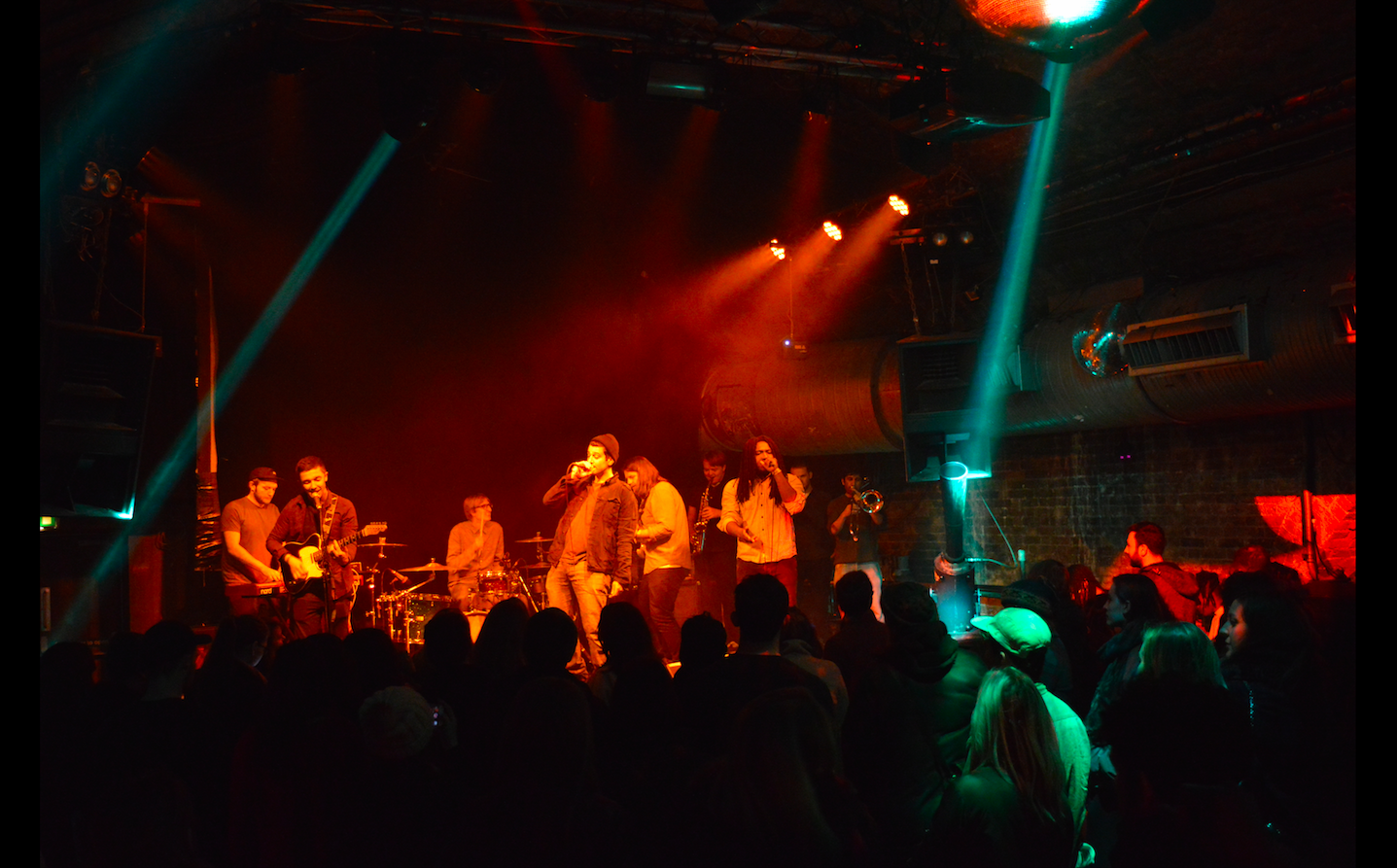 The band on stage [Damiano Petrucci]

The lights dim down. The audience suddenly hears an introductory couple of bangs from the blonde silky haired drummer centred at the back of the stage, followed by the first verse of Cross Fire, which achieved a noticeable and harmonious connection between the rapper and the three trumpeters placed on the right side of the stage.

Within moments, lead singer, Ben Wills, flows in with the his soft voice to tie together all the various beats spilling out from every nook and corner of the stage.

The crowd slowly beings to feel the music, they sway from side to side, accepting this intriguing juxtaposition of echoes that make you want to dance.

Their first song did absolute justice: for the songs that followed were accepted with the same kind of enthusiasm one could imagine seeing at a Channel One gig.

Ben Wills and the rap artist of the show worked impressively in effective timing with one another throughout the entire performance, despite the evident difference in genres.

All the other band members were also lost in this beautiful and what looked like an effortless orchestration of music.

Unforgettable were their captivating moments where at first, the drummer would take over the entire composition for a moment or two, soon after which the trumpeters would take their turn, and eventually all the band members had their time to embrace a solo performance in the midst of this shared collective experience.

It was no surprise to discover that Shanty has made an appearance at several popular UK festivals. Glastonbury, Boomtown Fair and Leopalloza are just a few to name.

They’ve even recorded in Sawmills Studio in Cornwall, a studio that once occupied legends such as The Verve, Oasis, The Stone Roses and Supergrass.

Not to mention they’ve shared the stage with renowned artists like The Wailers, Easy Star All Stars and Bastille (again, naming just a few)!

And guess what? They’re currently getting ready to hit the road for the Strange Little Human UK Tour, and the last stop is in London on March 23 at Brixton Jamm – so don’t stupidly leave it to the last minute to buy your ticket, for there’s a high probability there won’t be any.

In the meanwhile, find them on Spotify, so that you can join that lively group of people at the gig who know all the words to their catchy songs!

Visit Shanty’s website to watch, listen and jam to their tunes.