Freshly off the grill, Lockhouse in Paddington, opened its doors on January 14, boasting an array of succulent burgers and experimental cocktails.

But uncertainty within the ranks about the future of the Waterside restaurant are high; the staff are quite literally stumbling to keep up with basic orders.

At night, illuminated by show-lights at the base of a futuristic glass tower, Lockhouse proudly states its presence at the Paddington Basin.

Its exposed fittings and metal beams, contribute to the hipster aesthetic the restaurant has so evidently strived for.

Upon entering, straight away our eyes were greeted by an extensively cluttered bar, contradicting the modern and minimalistic surroundings.

There were mismatched tables and velvet chair furnishings, there in an abundance at this two-story eatery, of which we were placed at the back. 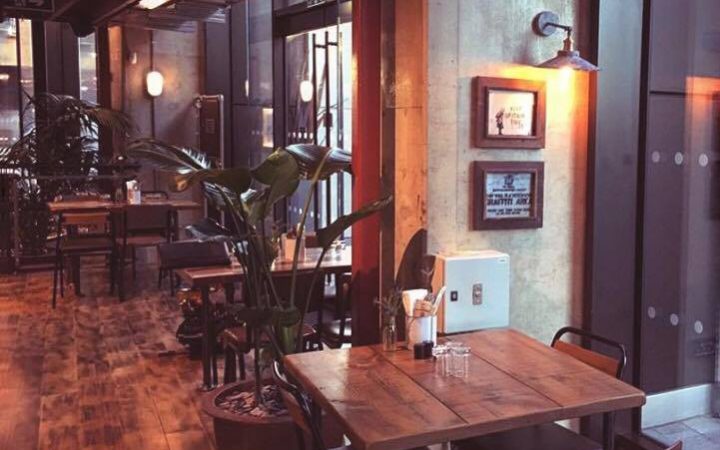 Promptly, a high-spirited waitress attended to our table, her vivacious personality was contagious and set up for a promising night.

However, that promise was short-lived. After waiting over 20 minutes for two cocktails, two burgers, and two sides, we received every single part of our order wrong.

All this left us confused as to whether they were even serving the right table.

Wrapped in packaging reading ‘falafel’ was certainly not the vegetarian burger I ordered; meanwhile my partner’s ‘Locked and Loaded’ burger, said to be the meatiest on the menu, or so they claimed despite a single lonely strip of bacon and a shrunken meat patty.

My side salad had been forgotten, taking a further 10 minutes to be plonked next to our two, now empty, burger baskets.

Due to the trendy Mason jar containing packet salad leaves, there was obviously no need for any diversity in this salad, not even a single tomato or slice of cucumber, and what, two drops of dressing?

Another major flaw to serving leaves in a jar is that even a jug of dressing wouldn’t have been able to penetrate the salad, leaving a vinegary pool of limp leaves on top.

Not that it would have really made any difference to how it tasted anyway, there’s only so much you can do with a Tesco bag of lone baby lettuce. 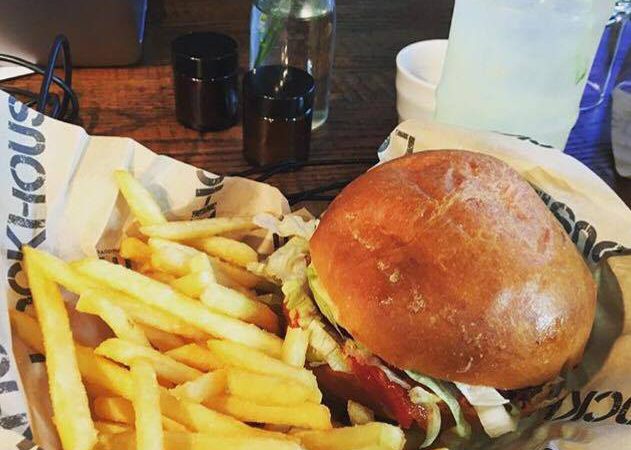 ‘Locked and Loaded’ burger with a side of chips

The fries, which actually tasted good, were masked under a hardened helmet of cheese garnished with a handful of shrivelled, discoloured jalapenos.

Having ordered the ‘Lock Party’ cocktail but explicitly requesting it with no beer top, surprise surprise, we were treated to a beer top.

Despite the blatant lack of communication between the serving staff which meant our order was wrong on every front; the burgers themselves were actually flavoursome, and the cocktails offered a welcome twist on the classics.

The bread was fresh and the ingredients were of a high quality, it’s just a shame the patties didn’t fill the buns.

As the night progressed and the customers began leaving, the four members of staff who had previously been serving our table, left us neglected in the back corner, unsure of who was in charge of our section of the restaurant.

‘Out of sight, out of mind’ was the attitude of the waiting staff in the dwindling hours of the restaurant’s popularity.

Noticeably embarrassed from their chain of mistakes earlier in the night, when we came to pay the staff made amends by only charging for half of our meal and offering profuse apologies.

Although these are only early days for Lockhouse, it is apparent that the team are yet to bond, roles need to be allocated more appropriately and the staff urgently need to communicate more effectively.

If it wasn’t for a succession of blunders and confusion the whole experience would have been fairly pleasant.

I actually had a good time aside from the shambles caused by miscommunication between staff members.

The extremely polite waitress made up for the consecutive errors, the cocktails were well blended and delicious and the food was fresh and succulent.

I would definitely go to Lockhouse again, but I will wait until the restaurant has landed on its feet and the staff have bonded.

My burger was good but if I only wanted a good burger I’d go to a chain, at the momnt LockHouse isn’t worth the mistakes we had to deal with.

All images by Ella Wilkinson