Can computer games like Minecraft help in online schooling and treating Syrian refugee children and give them hope for a world they don’t feel different in?

Designing a neighbourhood in Minecraft might seem like a pleasant yet insignificant pastime to most young people, but for Syrian refugee children, creating the home and school of their dreams in a virtual environment can be therapeutic and give them a sense of control and hope.

“Children love to play games, especially video games,” was the thought that Dr Selcuk Sirin had as he was watching his own two children play video games at home.

As a result, the New York University (NYU) Professor in Applied Psychology, was inspired to leverage technology and use gaming technologies to help refugee children to cope with language barriers as well as improving their mental health.

Dr Sirin and his team are the first in the world to use gaming as an educational tool to innovate the ways we can help refugee children. These are children who have experienced highly traumatic events; witnessing deaths in their families and barbarous violence such as beheadings and shootings. NYU’s research demonstrates that as a result, refugee children are at risk for a range of mental health issues.

The Project Hope researchers create tasks to encourage children to imagine a better future for themselves, using Minecraft, which is the second best-selling video game of all time as of 2017. These tasks consist of encouraging the children to create their dream house, their dream neighbourhood, and their dream school. Through Minecraft and Alien, as well as game-based coding and language lessons, they are aiming to address the challenges both mentally and educationally faced by these kids.

“We are talking about 5.5 million Syrian refugees in the world. About half of them are children, and a lot of these children are not in school right now. The question is how are we going to reach them? Making sure they all attend school would be ideal, but that’s not practical, we don’t have the resources,” says Dr Sirin explaining that this research, and intervention as he calls it, came out of that dilemma. “We know what is right for them, but what is right is expensive. Then we start thinking what else can we do? So this is the start.” 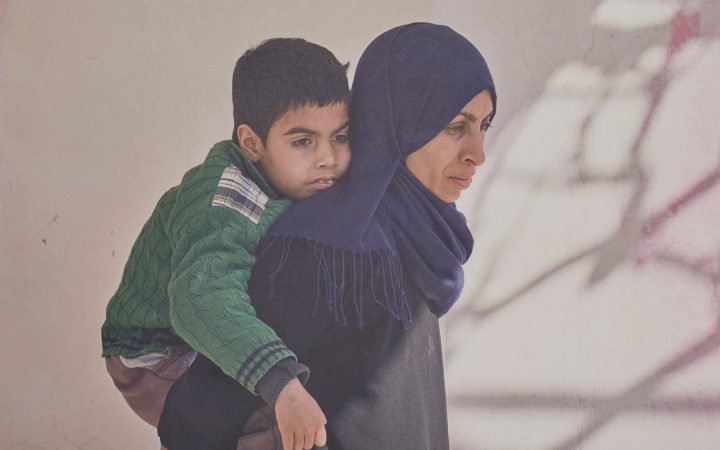 Syrian mother Adira, 30, arrived in Turkey with her husband and two young children; Abbas, 7, and Aya, 5. Abbas suffers from cerebral atrophy and violent epileptic seizures. [Nick Ballon, Save The Children]

The pilot study ‘Project Hope’ took place in Urfa, a Turkish city by the border of Syria, which is home to the largest population of refugees in Turkey – the country which hosts the most Syrian refugees in the world. Project Hope intends to give the children basic skills such as Turkish, mental management, coding and a sense of hope for the future. As there are not many Arabic-speaking professionals, or even citizens, in Turkey, learning the Turkish language is a vital necessity for the children who are now settled there.

“The children are getting better, it’s safe here, even though we all struggle with not being able to understand Turkish,” says Khalid, a Syrian refugee who fled to Turkey with his wife and five children.

With a game-based approach, the participants were presented with 200 Turkish words through Cerego, “an adaptive learning technology platform based on principles of neuroscience and cognitive science.”

The website selects what content you need to review and when, helping kids learn more effectively and remember more of the chosen educational subjects. Playing Alien, where children are praised for fast reactions and short-time memory, serves as an executive functions training for them. While the players distinguish between diverse elements, their abilities to plan, monitor and alter behaviour are improved.

The children also learn to code as a relevant 21st-century skill via code.org which is a non-profit website where they can learn about computer science. It’s highly practical as coding is a skill they can learn on their own by writing lines of code to skip levels in the game.

Lastly, the intervention group plays Minecraft to increase children’s hopefulness levels by putting them in a world where they are in complete control, and can design their imagined scenarios by building constructions “of textured cubes in a 3D generated world.” 147 Syrian children between the ages of nine and fourteen participated in the study, two hours per day, five days a week, a total of 80 hours in four weeks. 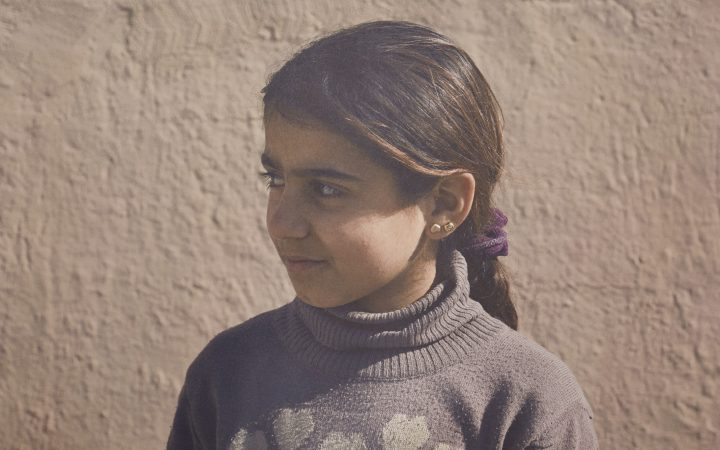 Nesreen, 9, she and her family fled from Idleb to Turkey. [Nick Ballon, Save the Children]

“About 90 per cent of the children that attended our project wanted to come back,” says Dr Sirin. There were positive results from the surveys completed every week by the children, reporting they were learning from the games and that they would recommend them. According to the results, children were not only satisfied, but their Turkish language skills were significantly higher, and there were fundamental improvements in their cognitive skills following the month-long intervention. On average, they wrote more than 1,800 lines of code and completed 182 levels on the platform which demonstrates great competence. Accompanying the improvements in their skills, the hopelessness rate went down by half in just a month.

The picture gets strikingly worse when it comes to higher education as only less than 1 per cent of refugee children are in college. Before the war, Syria was considered an education success story, with a rate of 51 per cent enrolment which is particularly high in the Middle East. At the moment, 90 per cent of the refugees settled in Turkey are not going to school. 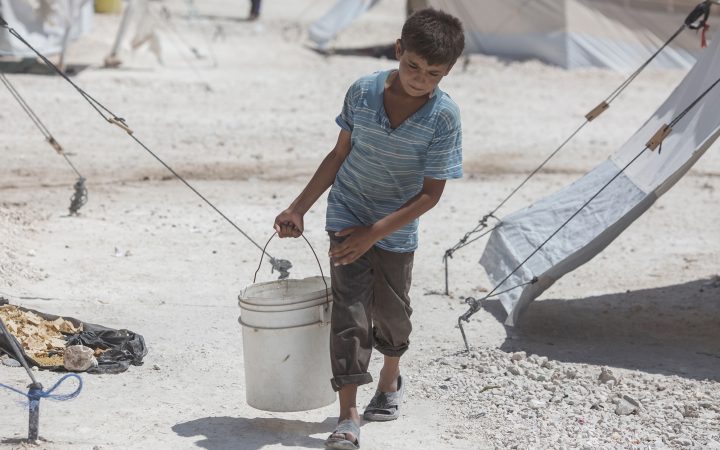 Yacoub, 12, from Raqqa, Syria fetches water from a tank in a camp for people displaced by the war against ISIS, in, Syria. Yacoub was unable to go to school after ISIS occupied Raqqa as parents feared the schools might be hit in an airstrike. [Save the Children]

These vulnerable children have just witnessed a war, 79 per cent had experienced someone die in their family, 60 per cent had seen someone get kicked, shot at, or physically hurt, 45 per cent experienced PTSD symptoms and 20 per cent are clinically depressed, which means if they were in a Western country, they would be considered to need immediate help. They cannot sleep or eat like a regular person and have suicidal thoughts. The ethical norm in a conventional scenario would be to reach out.

“He saw people being beheaded, and their heads hung in the streets. He is always afraid now,” says the mother of nine-year-old Ahmed who is now settled in Turkey. “After those incidents, he became aggressive. But he doesn’t know what he is doing.”

Save the Children’s report notes that Ahmed has seen “dead bodies, heads on spikes, lashing and several other violent incidents. After almost one year living in a residential centre for mothers and children in Turkey near the Syrian border, his mental health has improved.”

“I am afraid of blood, and I am afraid to see a dead body and someone with his head chopped off. When I feel sad now, I go to my mum and sit next to her. She comforts me, and she rubs my hair, and I feel happy,” says Ahmed. 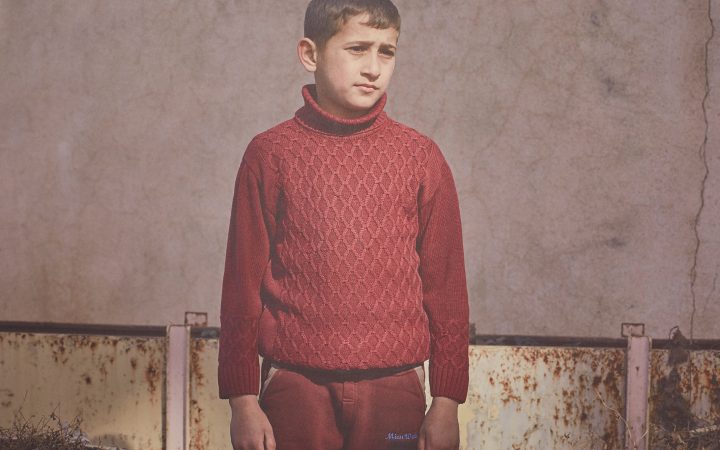 Ahmed, 9, now lives at a residential centre for mothers and children in Turkey near the Syrian border.

Some of these traumatised children have never sat at a school desk or received any kind of education. There is a “lost generation” problem as Dr Sirin calls it. And this generation of traumatised kids who never had a chance to go to school might become even more lost if they are not treated in the right way. Sirin stresses that providing food and shelter is not enough. To give them hope, educational opportunities and the opportunities to engage in the society need to be provided.

“Anti-refugee sentiments and making them feel different, or like they don’t belong causes a lot of young people to look for other alternative ways of engagement rather than civic engagement,” Sirin points out. “If we fail to provide that, we don’t need to look more beyond than parts of the world that had refugee crisis.

“For example, the Pakistan-Afghanistan refugee crisis in the 1980s where nobody paid attention to the needs of the refugees. Similarly, Taliban and ISIS came out of refugee camps, from internally and internationally displaced people in the Middle East and they exploited those circumstances,” Sirin says.

“We cannot afford to have another crisis that leads young men and women to take actions that are not the best for their own sake, but that are even worse for our sake.”

One thing Dr Sirin is certain about is that even though it takes time and effort, trauma can be treated. When people who were faced with severe traumas are provided for, they have the capacity to imagine peace and recover.

For this recovery to be in a traditional and non-technological way, however, he explains, there would have to be millions of professionals who speak Arabic. And that is where technology and Skype and online therapy can help. 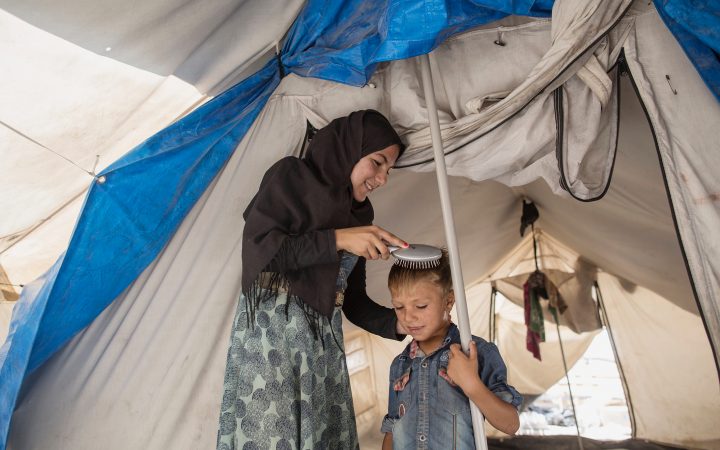 Raashida, 13, from Raqqa, Syria, brushes her brother’s hair inside the tent in which she and her family now live, in a camp for people displaced by the war against ISIS, in Syria. [Save the Children]

The transformative power of technology is something Dr Sirin, and his fellow researchers are profoundly hopeful about, as there seems to be a crisis of traditional schooling anyway where children don’t want to go to school and don’t seem to learn as much as they used to.

“I believe that online schooling is one option,” Sirin states. The 19th century, industrial revolution idea of a school building where kids have to stay for an extended time appears outdated as he believes we have to think anew in the 21st century. Their work with the refugees reflects that search, and can maybe even be expanded to other kids in the future.

Whether game-based learning is the new revolution in education or not, at the moment it just might be the most practical, cost-effective and efficient solution at hand for reaching and helping refugee children who are in great need.

All images by Save the Children