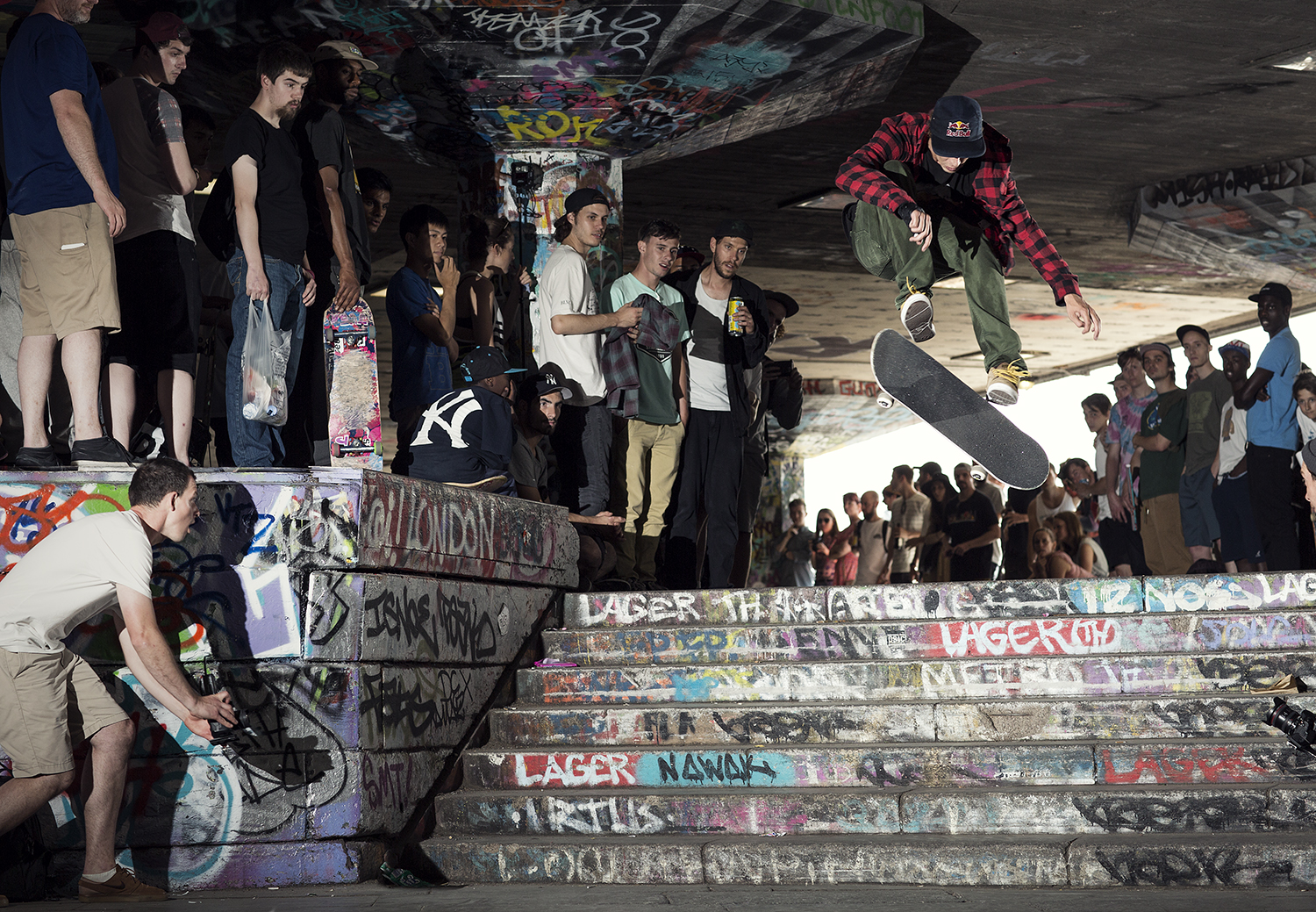 As a young skateboarder growing up in Belfast, I was always seeing footage of Southbank in videos emerging from London, and I always found it hard to believe that the UK had a skate spot like this to offer.

When I moved to London two years ago, Southbank was one of the first places I visited and it didn’t disappoint. There is a strong sense of community within the skateboarding scene, and the Undercroft was the London hub.

You roll into the Undercroft and instantly there are other skateboarders from all over the world introducing themselves and asking how you are.

Everyone is supporting and motivating each other to land whatever trick they are pushing for. There are no cultural barriers. I can’t think of any other ‘activities’ that have such a carefree and accepting culture like skateboarding. I was lucky to be able to experience this.

The birthplace of UK skateboarding, Southbank Undercroft, first came under threat of being taken away from the skateboard, BMX and graffiti community back in 2013, when the Southbank Centre revealed plans for a £120 million redevelopment of it’s ‘festival wing’, which would involve turning the Undercroft into another retail unit that London so desperately needs.

Built and designed in the 1960s with a utopian view of the future, situated on the south side embankment of the Thames, the Southbank Centre’s Undercroft has been home to skateboarding, BMXing, graffiti and other urban activities in the UK’s capital for over 50 years.

This makes it the oldest recognised and still used skateboarding space in the world. But the Undercroft space is very different now compared to how it was in the past. It’s now a third of its original size, due to extensions of the Southbank Centre, and several restaurants, creeping more and more into this sacred mecca of British skateboarding.

Long time London skateboard videographer Henry Edward Wood said: “This is part of London’s cultural identity and part of the British skateboard identity. It was designated to skateboarders and they’ve been here since 1973.

“The Southbank Centre was only formed in 1988, skateboarders have been here before this institution existed. Since they came into power of this site there has been a long history of them trying to oppress skateboarding. This is an arts institution trying to get rid of one of the truest forms of expression on this site.” 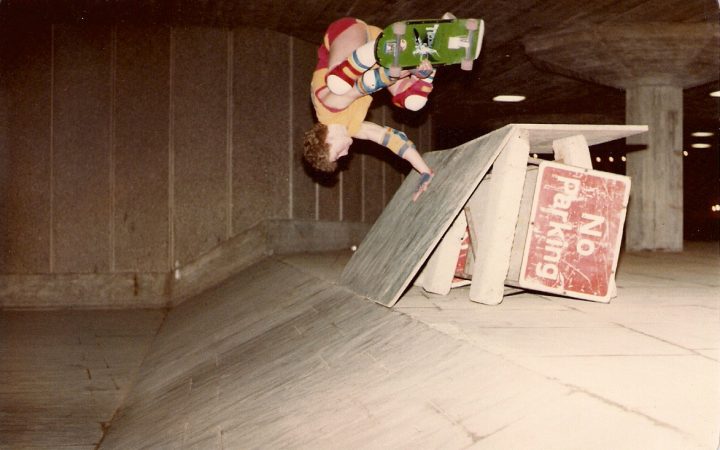 In an attempt to put an end to the theft of urban British culture, a group of skateboarders set up the Long Live Southbank campaign in 2013, which quickly gained a vast following and now boasts 150,000 followers in support of the campaign.

With legal representation from King & Wood Mallesons SJ Berwin, the campaign took action in securing the Undercroft’s listing as an Asset of Community Value by Lambeth Council.

To build on the chances of saving the Undercroft, the campaign also launched an application to protect the space as a ‘Village Green’, under the Commons Act 2006. The application was taken to the Royal Courts of Justice for review after Lambeth declared it invalid.

The turning point came in 2014. Long Live Southbank’s campaign gathered over 30,000 individual objections on the ‘Festival Wing’ proposals and delivered them to Lambeth Council. This made the Centre’s planning application the most unpopular in UK history.

The campaign also gained the support of a number of politicians, including the Mayor of London at the time, Boris Johnson who stated the Undercroft is “part of the cultural fabric of London”. Support for the campaign rocketed and in September 2014, Long Live Southbank and the Southbank Centre signed a deal, securing the future of the Undercroft.

However, the campaign didn’t end there. Founders Stuart Maclure, Paul Richards and Matthew Nelmes have launched a crowd fund donation page, with the intention of raising £790,000 to restore and revive the Southbank Undercroft. With that, they also want to set up a Young People’s HQ at Southbank Centre, with the ambition of giving kids somewhere to go to stay out of trouble.

Despite this, the Southbank Centre have been accused of trying to destroy the Undercroft for skateboarders over the years. As Woods explained:  “They ripped up the paving slabs, sent security down to bully kids, drilled holes in the floor (so wheels would become stuck) and in the early nineties they even turned the lights off at night so you couldn’t skate. Unsurprisingly crime sky-rocketed.” 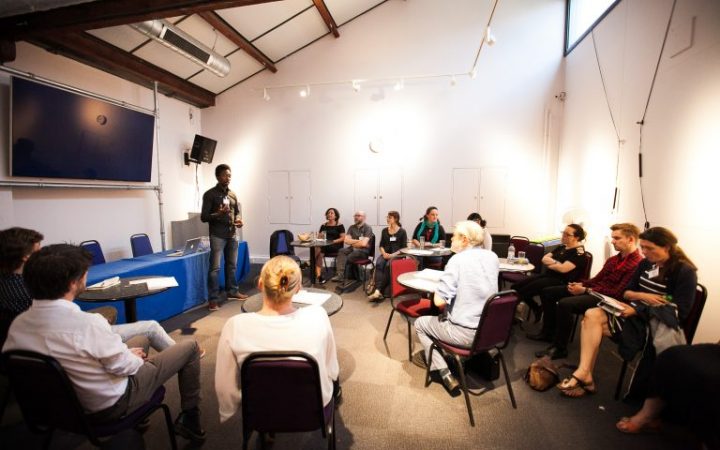 Discussions for the future of the Undercroft. [Chris Chronin]

The void that is the Undercroft would also undoubtedly be a hot spot for crime if it wasn’t for skateboarders occupying the space. I have even personally seen fellow skateboarders steer trouble out of the Undercroft, by breaking up fights and so on.

The Guardian recently touched on the benefits of skateboarders’ efforts to ‘make cities safer’, particularly in London. Talking about the Southbank area, Woods told them, “It wasn’t like a High street like it is now; it was beautiful, a big open space to think and be. The point is skaters made that area safe; in the old days it was cardboard city. That is what skating does: it fills the cracks in society left by capitalist development.”

Another example of skateboarders making cities safer places would be their occupancy of Philadelphia’s notorious Love Park. There has been a ban on skateboarding there since 2000, but skaters fought to keep their sacred ground.

Unfortunately the battle was lost and the area has recently been redeveloped at the cost of $800,000, in a way to entirely prevent skateboarding. The park has had trouble in the past, mainly with homeless people in the 1980s, who brought drug and alcohol abuse to the area. Property values surrounding the park dropped and the city deemed the area dangerous and derelict.

However, in the skateboarding boom of the 90s, the park played host to Philadelphia’s skaters, how came in swarms due to the smooth concrete, ledges, stairs and much more.

This brought change. Ocean Howell, ex-professional skateboarder and professor of architectural history at the University of Oregon, said, “In the public eye, the skateboarders were tempering the activities of the homeless population, injecting skateboard industry capital into the plaza (Love Park), and generating a hip image for the city.’”

“We wanted to ensure we kept true to the original architects ethos and vision, both architecturally and our approach to the space and its potential for use by the resident community,” they told us.

“We’ve been researching the building designs for four years now and we will be restoring the legendary small banks, the wooden beam and part of the original driveway which will form a bank to wall. Its a key factor that we wanted to get everything back to the original design features.”

These features of the Undercroft resonate as legendary throughout the skateboarding community, and are in popular demand to be part of the restoration.

“We were especially inspired after hearing so many stories from the 70s, 80s, 90s, 00s which told of the area of Southbank that has become known as the ‘old space’. The stories, tricks and design elements of the old space are legendary,” Richards and Maclure said.

Many people have memories of watching skate videos that featured the ‘old space’. The skateboard-friendliness of it incredible. 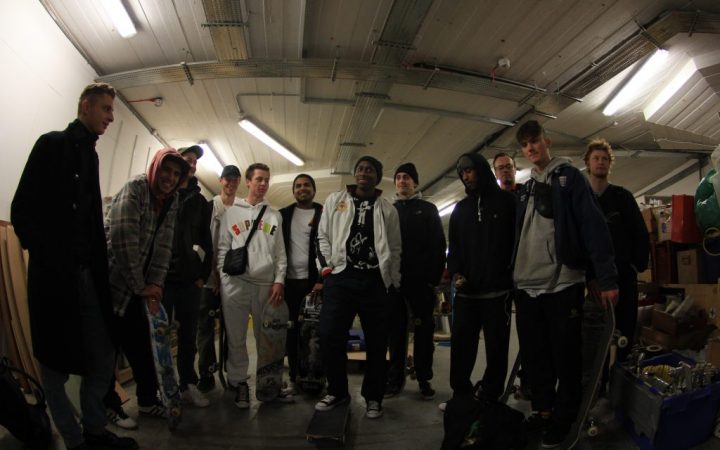 This new turn in the campaign has been greeted with massive support from big skateboarding brands. Adidas recently launched a collaboration with Long Live Southbank, releasing a shoe in a black/grey colour way to represent the colours of the Undercroft, and with each purchase a donation goes towards the campaign. They also released a clothing range.

“People have been really supportive and generous and we’ve been lucky to collaborate with adidas to help raise funds from a limited edition range, and Palace who created a special deck,” Richards and Maclure told us.

Many global skate teams have made their way to London to put on demo’s in the Undercroft over the past year, such as Vans, Nike SB and Huf, reminding skateboarders that the fight isn’t over yet, there is still another push to restore their beloved spot.

London-based skate brand, and now worldwide streetwear giant, Palace, has many connections with the Southbank. Palace team riders such as Blondey McCoy and Lucien Clarke have got a strong presence and following in the fashion world, and have had been featured in articles by I-D magazine, the BBC and HighSnobiety.

They used this exposure to bring the Southbank campaign to the attention of more people, explaining the importance it holds in British skateboarding. Blondey McCoy, who is also an artist and founder of the brand ‘Thames’ has been skating at Southbank from the age of 13.

“The people I met when I first came here were like nobody I’d never met before. Prior to that my only social interaction was with kids in school, so Southbank introduced me to so much, all types of people,” he told i-D. 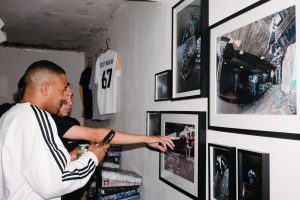 We spoke to skateboarder, Sammy, 21, while visiting the area, and asked him what Southbank means to him as one of the third generation of skaters using the Undercroft.

“It’s a part of London that skaters can call their own. The fact it’s on public display, with passers by always stopping and watching the skaters for a couple of minutes in a theatrical kind of way gives a sense of pride to the skating going on there,” he told us.

When asking him about what he hopes comes from the restoration campaign he says, “I obviously didn’t get the chance to skate the old layout back in the day, but from looking at old photos and videos, it would be great to see the small banks back again, them ones with the wall ride behind it.”

Discussing the the likelihood of restoration Sammy says: “£790,000 is a big ask, theres no doubt about it but it could happen. I mean look at the recent collaboration they did with Adidas. Major brands are jumping at the opportunity to help the cause.” 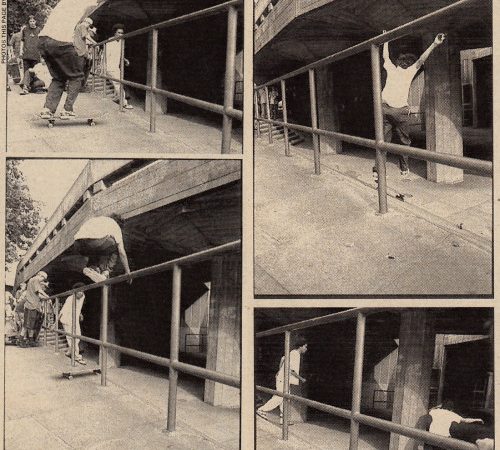 Mark Gonzales skateboarding at the Undercroft in 1994  [Skin Philips]

We also had a chat with Pete, a Southbank veteran: “I’ve been skating here for over 22 years. If it didn’t exist I wouldn’t have half the friends I have now. What’s special about the Undercroft is the fact it was never planned, it was designed to be a skate park, but just look at it. What else could it be?”

When the topic of the restoration campaign arises he states, “It will never be the way it used to be, that’s not possible, but I can definitely see some major improvements over the next couple of years. The crowdfunding campaign, as far as I’ve heard if going slow but steady.

“The guys don’t want any big donation from anyone outside skateboarding, saying they would rather 790,000 one pound donations. It’s in the pipeline, we’ve came this far as it is!”

It’s early days for this latest crowdfunding campaign, but there is hope for success. Now that skateboarding has been launched back into the mainstream, like it does every decade, support from the public will undoubtedly increase.

Maclure and Richard put it perfectly, “Southbank resonates with so many people, even beyond skateboarding. It’s an oasis of self-determined free expression which has evolved over generations. The energy and vibrancy of the space is clearly evident. We never realised just how much the space resonated with so many people.”

You can help the restoration project by donating at www.llsbdonate.com and follow #youcanmakehistory