It’s that time of year again, where we reflect on our year and wrap Christmas presents.

We here at Artefact thought that it would be interesting to end the year by finding out what you thought of 2017, so we decided to interview different students across LCC from different year groups – from breakups to make-ups, to Donald Trump and internships, the spectrum of topics concerning our generation is quite broad.

It is not surprising that when asked about last year, the students talked about the last academic year. Even though we are all grown up and studying in a university now, most of the people still relate to academic, but not actual years. This idea is most relevant for people who come to a college for their first year.

For example, for Faryaab Sheikh, a first year in Advertising, a great achievement was to enrol at a university. Faryaab has been earning his own money since he was 14 years old, and before writing he was doing software. Faryaab didn’t think that he should proceed with a higher education to become successful, but his father persuaded him to go to a university, and he agreed. “Practice in the real world makes you learn better than you would do so in an academical institution,” Faryaab tells us.

He also claims that 2017 has been a terrible year for him and he is looking forward to 2018 now. Faryaab plans include pivoting from technology writing to YouTube and social media influencing. “I used 2017 to learn a lot of new skills, and I plan to use them in 2018,” he says.

Asena Ecem, a first year student in Animation, is more positive about becoming a student: “LCC has such a pleasant atmosphere; they are trying to make people feel comfortable, especially if you are in the first year. There are a lot of international students that come here, and our tutors want to make sure that everyone is stable both mentally and physically. What I appreciate about this university is that LCC is always open for you.”

Asena says the college has allowed her to meet her new friends, Victoria and Freeman. She thinks that they are the best people out of all in this university for her and that they are the only reason why she is so enthusiastic about going to LCC.

But no matter how confident the words of Asena sound, it seems that the gates of LCC are not open for every student willing to study here. Shiyi Liu, a second year student of IDA tells us “I’ve heard from someone saying that LCC is going to stop interviewing people. I want to know if it was true and it will upset me if it was true.” 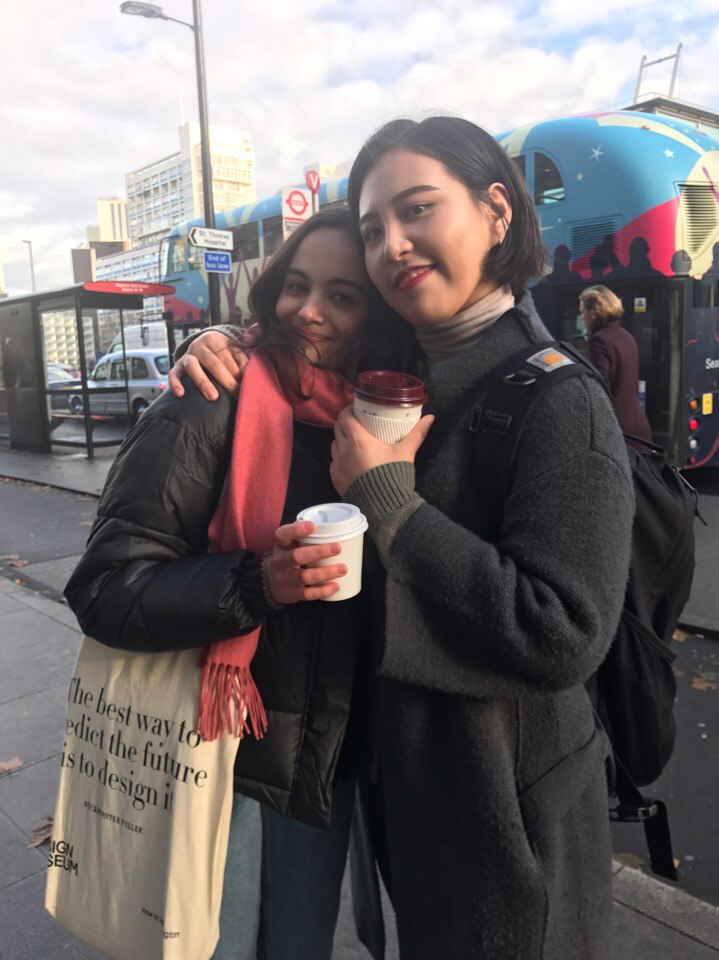 Magdalena Obmalko with her friend Daom.

Shiyi believes it will be unfair to favour international students over the UK ones as the former pay more money than the home ones and it is hard not to agree with her. But if we ask students of other courses, the one thing that all the students of the second and third-year mention are how hard it becomes to earn good marks and how serious the studies become. If in year one a student was forgiven for making small mistakes than now it is the time for him to focus better.

“I feel college is getting serious,” says Sherry Li, a second year student of Animation. “Last year was more introductory than this one, and now it feels like I am more into it.”

Lauren Shaw, a third year Advertising student, agrees: “In the second year and first year I left it to the last minute and you can’t do that in last year.”

Talking about challenges that they face, lots of the students argue that it becomes more difficult to focus on many tasks at a time. One of the biggest achievements of her entire life, Jae Wilkinson, a third year student of Illustration and Visual Media, claims to be working on three jobs as well as freelancing as well as interning: ‘It was a struggle, and I’ve never worked so hard in my whole life,” she says.

Magdalena Obmalko, a second-year student of Design Management and Cultures, told us that there were a lot of difficulties to face for her during this year but she is proud to have overcome them. It is evident now that everything comes for a great cause and one of them, according to Shiyi Liu, IDA, 2nd year, is developing a better technique.

The time of youth is not only filled with growing responsibilities and studies but active personal lives as well. For one of the students, this year was useful regarding personal growth. Daom, studying in the second year of Design Management and Cultures it was a year of break ups and make ups. She broke up with her boyfriend to come back to him later on this year. “I learned a lot from 2017,” she tells us.

Even though the weather changes in England is not a new topic for anyone living here for a long time, we can still find that it worries students that coming from foreign countries.

In her second year in the UK studying in a university, Daom always finds it difficult to cope with the local climate. “2017 is similar to 2016 because living in the UK is hard for me. Life here is different to live in my country, South Korea. It’s windy here, and because of the weather, it was awful actually. I hate it.”

The list of this year’s worst things mentioned by students includes the migrant crisis, terrorist attacks and the overall political situation in the world. The majority of the students cannot accept the fact that Donald Trump has become a US president – Lauren Shaw says: “Donald Trump is just overall bad, and as I guess if he is still alive that’s bad.”