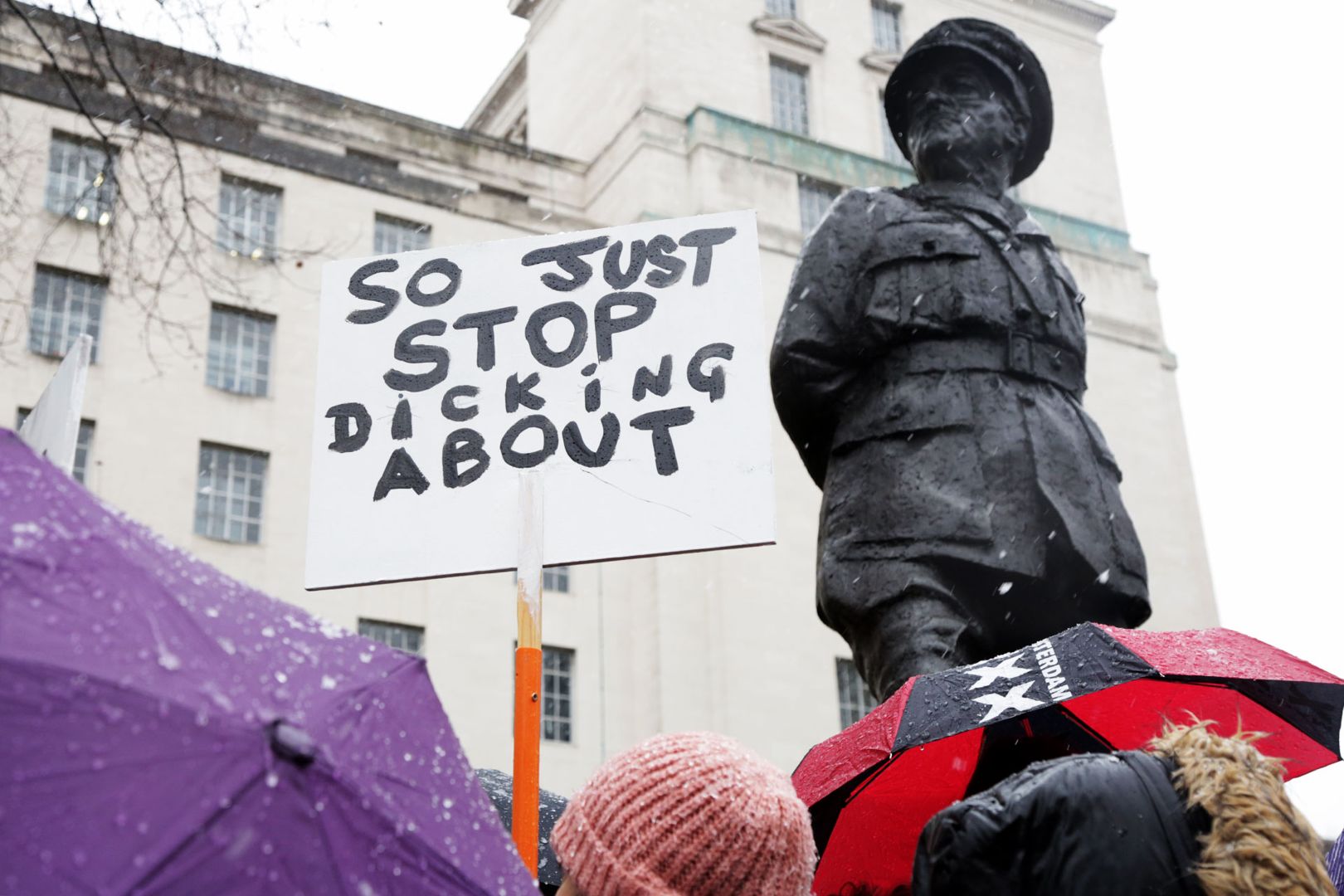 Taking place opposite Downing Street, the 2018 Women’s March saw thousands of women, and men, joined together against gender inequality in London as it did in several other cities across the world. However, many of the protesters stated that they felt the march got far less coverage compared to the previous year.

The Women’s March in 2017 shut down central London and saw millions of people walking to protest in seven continents following Donald Trump’s inauguration.

Protesters in London gathered by the memorial to women in the Second World War, chanting “Time’s up!” and “We want justice, not revenge” through the pouring rain, declaring that time is up on gender inequality, gender-based violence, sexual harassment and abuse.

“Time’s up on the systematic and politically motivated underfunding of the services survivors depend on, time’s up on victimising survivors and allowing abusers to avoid accountability. Time’s up on the culture that tells men they are entitled to women’s bodies,” read their statement on Facebook.

On top of this racism, prejudice, inequality of other marginalised groups, economic oppression of women, the climate of profit over people and denial of climate change were also listed as matters that they would be protesting against.

This year’s protest was named ‘Time’s Up rally’ after the campaign launched in January by women in Hollywood to counter sexual harassment in the entertainment business and workplaces following the Weinstein scandal and #MeToo movement.

The focus in London’s protests was “calling Time’s Up on everything that’s holding women back as a nation and as a society,” stated women’s rights activist and lawyer Dr Shola Mos-Shogbamimu who co-organised the march.

Speakers at the protest included, amongst many others, women’s rights activist Dr Helen Pankhurst who is the great-grand-daughter of Emmeline Pankhurst as well as the leader of the Women’s Equality Party, Sophie Walker, who gave speeches on equality for women, thoughts on Trump’s UK visit and about their own experiences with gender inequality and oppression.

“I came to the women’s march because I think now is the time when we have to be stronger than ever. We have to be supportive of each other and show that support whenever we can,” said one protester, “these occasions are a great place to speak your voice and listen to the amazing, inspiring but often devastating stories of other women. You share your experiences and empower each other. That’s very important.”

Women’s March London has tweeted that their appearance on the ITV show Good Morning Britain was cancelled, sparking debates around the coverage of the event. The presenter of the show, Piers Morgan replied: “The editors/producers didn’t think it was worth debating an event that was rather dull and attracted so little news coverage.”

Protesters in other parts of the world, especially those who attended the main march in Washington, DC, also stated that they felt the marches were largely ignored by the mainstream media. Media Matters reported that the Sunday shows barely mentioned Saturday’s Women’s March.

Commentators have stated that the reasons for this year’s Women’s March receiving relatively little attention was partly because of having to compete with other news for the headlines (the government shutdown in the US) as well as having fewer attendees and thus not being as big this year.

“The very fact that news coverage of Women’s March 2018 was so small in comparison to how big Women’s March was, is proof how needed it is,” said one protester.

An open letter to Theresa May regarding ‘holding hands with Trump’ has also been published by the Women’s March London, as well as a list of ten calls to action such as “demand that your employer pays women and men equally, end period poverty by supporting Bloody Good Period, volunteer or donate to a rape crisis centre, women’s refuge, or a minority women’s charity”, advising supporters on how to get involved further following the march.

All images by Lauren Dudley