Is university worth it?

University still remains the most popular option for students leaving college and sixth from but do current and past university students believe university is worth it? 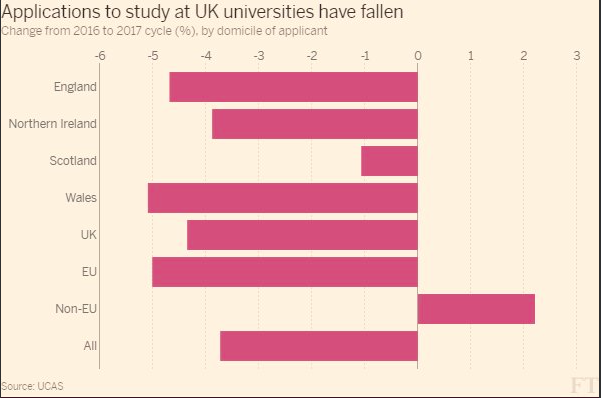 Graph showing break down of the difference between 2016 and 2017 university applicants.

In 2017 there were 529,620 university applicants from students in all four countries in the UK.

However, this major option of attending university is now becoming less appealing to students today. UCAS applications fell by four per cent (25,000) in 2017 compared to the previous year. This was the first decline of aspiring university graduates since fees were increased in 2012.

There are obviously some underlying reasons as to why fewer students are now opting to go to university which still remain unclear, but is university still worth it?

Student debts are now a growing issue for many young adults who would like the university experience. Statistics from last year revealed that postgraduates will now leave university with debts averaging £50,800, which is a scary concept when you’re only in your early 20s. However, in a survey for Artefact out of 60 people only 1 in 10 non-university students said they didn’t attend because of financial concerns.

Although it seems great having all of this money handed to you at a young age students need to consider the future debts which is a lot to think about from a young age. Student finance aims to support students as much as possible however, in quite a few cases even with the borrowed money students still struggle to pay there rent as well as living and travel costs.

That being said, current statistics show that employment rates and medan salaries are still higher for graduates compared to non-graduates by quite a large proportion.

According to the 2017 research, university grads will earn on average £10,000 more a year than somebody who does not have a university degree therefore, so it can be argued that they will be able to pay off their debts quite comfortably, given that they only start paying back once get stable employment earning more than £21,000 a year, and that threshold is rising to £25,000.

Financial support at university however isn’t looking up, as of August 1, 2017, most new health students including midwifery and nursing stopped receiving their NHS bursaries which in some cases was over £3,000.

The bursary cut has already started affecting the health care sector, as in 2017 the number of students applying for nursing and midwifery degrees dropped by 23 per cent after the bursaries were scrapped. Although this obviously drastically affects those pupils eager to go into such a specialist field university would still be the only option for them.

Emily Verdon, a Radiography Student at London South Bank University told us: “I think that discontinuing the bursary is going to cause more drop outs or fewer people to apply to do NHS courses as this money is vital for us, especially as we spend a lot of time on placement, working for free. It’s just going to increase staff shortages in the long run.”

In recent years however, apprenticeships are becoming more and more popular and are a great way for students to get straight into the working world and often mean students don’t need to move away from home and pay lots of fees.

Apprenticeships also give former college students the opportunity to get paid as they pick up new skills. Young adults are now finding lots of different opportunities available to them which means that they don’t have to attend university but will still be able to have a stable and successful career.

Ellie Brewster joined the Royal Navy after college four years ago, and is now able rating: “The thought of university never appealed to me. I knew I just want to join the Royal Navy. I joined up at the age of 18, have travelled half the world, met amazing people and gained many qualifications including the almost completion in a degree in oceanography and meteorology all paid for by the military. I don’t regret my decision at all.”

Another reason why students may not choose to apply to university could be due to uncertainty about what course they want to enrol on. When picking a university course students are essentially deciding what they want to do for the rest of their lives which is a very daunting thought.

It could be argued that the main reason young adults jump straight into university is because they feel like that is what is expected of them.

In the same survey conducted for Artefact the participants were asked ‘If they would change their course’ and 75 per cent responded with yes. This emphasises that students often take the jump to university without thinking thoroughly about what they really want to do.

Apai-Ketuya Marchant a student at University of the Arts London (UAL) took five years out after college to think about what she wanted to do with her future.

Within her break from education Apai thought hard about whether university would be useful to her and if she were to attend university what course would be beneficial for her career. Apai shared her decision with us and explained how she believes her choices were 100 per cent worth it.

“I feel like having a five year gap, even though it was a very long one and it kind of has pushed me behind in other aspects of my life but I do feel like it gave me enough time to really reason out what it is that I wanted to do and if I was going to do and if i did it  whether or not I used a degree in the end,” she told us. “I had enough time to look at what it was exactly I wanted to study”

Even though university applications seem to be on the decrease the actual over student satisfaction in regards to higher education institutions still remains quite high at 84 per cent. Results from a survey showed that out of the 50 who went to university 78 per cent of them didn’t regret their decision compared to 22 per cent who did. This suggests that it may be a better idea for young adults to wait to make their choices to make them more worthwhile.

There is still no doubt that for certain individuals who are very driven within their studies and have no doubts about the qualifications required for their dream job never regret their decision to progress into further education straight after college/sixth form.

Sometimes remaining in education without a break is more appealing for the individual as they feel like they may never have the drive to return to education again after going travelling or taking time out to work full time to save.

Rachel Carroll who graduated from Manchester University, is now a Sister of the Headland Unit at Royal Cornwall NHS Trust, she told us that university was a worthwhile decision.

“For me university was always the plan as i wanted to nurse from being such a young age. Although there has been huge inflation with tuition fees if I were to have my time again this would not stop me from attending university as it has been the foundation for my chosen career. 12 years on I am still sure I made the right decision and am grateful for the opportunities my education has provided me with”

Even though going into university is still the most popular option for students there is still the question as to whether they all go for educational reasons.

Liam Atherton is a Graphic and Media Design Student at UAL: “I think my decision for coming to university was definitely influenced by the social element, knowing that it’s a chance to make friendships and connections was for me more appealing than the education I could gain. However, I do think that getting a degree was more appealing than actually studying a degree, like having the degree was more important than learning.”

That being said the alternative options for students leaving college are now becoming more appealing for young individuals which is shown the popularity of these options now growing.

It is fair to say it will be interesting to see if the university applications continue to decrease in the future, or if 2017 was a blip.