Pretty much any bar you walk into in the capital has at least one tap providing punters with locally brewed liquid gold, which will usually cost you a fair few bob as well. That’s because these beers are made in small batch, more often than not by a family or a very small team operating from a very small site. I’ve even caught wind that some microbreweries are producing from pub cellars and garages.

The craft beer craze really took off a few years ago, but the business is really booming now with major supermarkets stocking many local brands. London boasts more than 80 registered microbreweries producing their own types of beer, all with a unique twist and take on the classic beverage. Each company has to put the work into their own design and theme to set them apart from the rest as competition is to tough.

Hammerton brewery returned from the dead, back to the London brewery scene by a family member who felt it was time for a resurrection. The brewery closed it’s doors in the late 1950s after a solid 90 years of producing quality lagers, pale ales, IPAs and such.

The Hammerton team set themselves apart from the rest by not only taking inspiration from English beers, but by going out to the far corners of the world, researching the global beer market for flavours and brewing techniques to put their products at the top of the market.

Not only have they recently reopened the brewery, but just a short 10 minute walk down the road on Holloway Road lies the House of Hammerton. The venue is bursting with history, with the most idiosyncratic tales being told about its past. 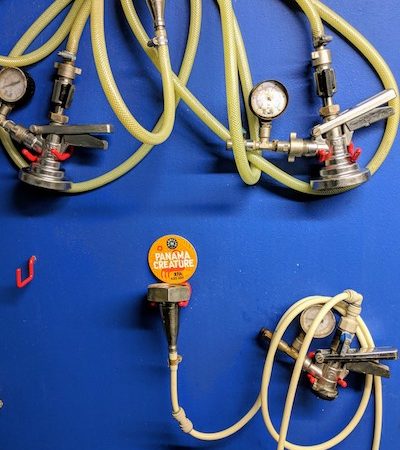 Panama Creature tap in the keg room. Image provided by Eddie, Hammerton Brewery. The stand out would be John Lennon and Yoko Ono standing on the roof of the pub swapping their cut hair for a pair of Mohammad Ali’s bloodied shorts!

The Hammerton team, lead by owner/chief brewer Lee consists of only eight people. That includes the sales team as well so we’re talking about a really close knit brand thats making a big impact on the London brewery scene.

They sell themselves as a brand that has their ‘Emphasis on taste, using the best quality ingredients possible.’ Artefact decided to visit the Hammerton Brewery on Caledonian Road to what the hype was all about.

Situated a handy 30 seconds from Caledonian Road and Barnsbury Overground station, the brewery found its new home in Roman Way industrial estate. As you approach the first thing that hits you is the smell. The rich aroma of the hops takes you away from hustle and bustle of city life, transporting you nasal passages to the countryside. It’s very similar to the smell of a farm, that said in the best possible way…

Once you’re inside the term ‘microbrewery’ really comes into play. The brewery is split into only two rooms; the production room, lined with towering metallic cylinders used in the process of brewing, and a storage room, with kegs stacked to the rafters containing all the freshly made lagers, IPA’s, pale ales, stouts and many more. 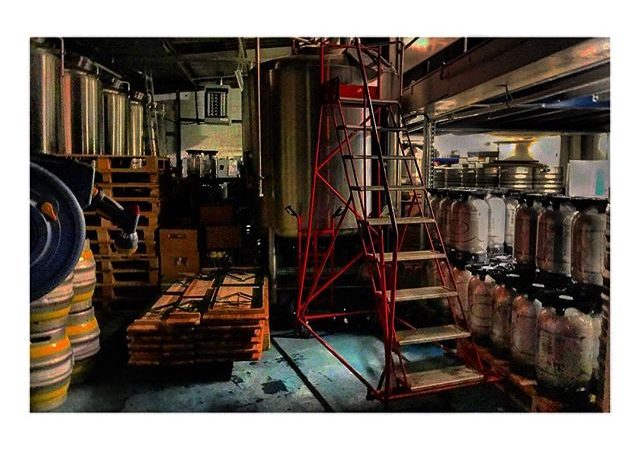 Where the magic happens [Hammerton Brewery]

I’m met by Eddie, Hammerton’s Head of Sales to take me on a little tour around this gem of a brewery. First things first, straight to the taps. There’s no messing around with these guys! Eddie passed me one of their N1 Pale Ale’s, a top seller nattily named after their postcode. The trend continues with their other brews such as Islington Steam Lager, N7, Pentonville Oyster Stout and so on. Yes I just said Oyster Stout, and yes it’s delicious!

After a quick tour showing me the brewing process and trying a few different beers, all of which I highly recommend, Eddy and myself sat down to discuss the microbrewery business.

Why do you think microbreweries and ‘craft beers’ have really taken off over the past few years?

I think that the whole mindset of organic local craft is becoming more and more important and people are willing to pay a bit more for good products. Beer in UK is part of the culture, especially Ales. In the UK, small breweries have been brewing beers for years and we can consider them “craft” in a way. In London, the craft beer scene took off because people wants quality beers. It’s as simple as that!

Since I started working in the craft beer industry I found out that there is a lot of thing you can learn about beer. It’s kind of the same thing as cooking to be honest, so many recipes and ways to brew.

What sets your products apart from other breweries?

I would say each brewery is different in so many ways; design, taste, reputation, beer awards and brew specialisation, like Chorlton that makes only sour beers. Hammerton is very into its quality beers, especially our casks which we’ve won multiple SIBA (Society of Independent Brewers) awards for.

Can you briefly explain the process of brewing?

To put it briefly; you start by steaming the malt in hot water which is filtering the malt. You then boil the sugar water which I like to call ‘liquid bread’ as it’s water mixed with the sugar from the malt. During the boil you then add the hops for the flavour. Leave that for a while the put the liquid in a fermentation vessel and add the yeast. Wait until all the sugars are consumed and there you have a it.

What’s your favourite product you make and why?

It depends on the season really but I like our Wheat beer and the Hazelnut brown (the Nut) that we made for the winter. The reason why is simple. It’s just beers that I like! My colleague loves stout so he would definitely go with that (and to be honest our stout is very good). 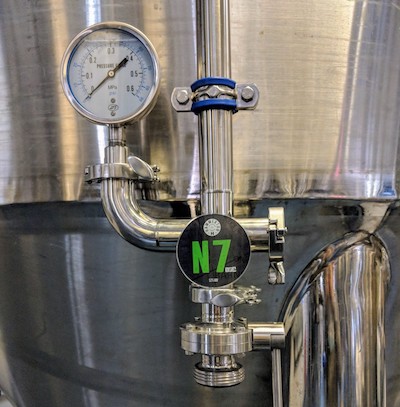 Do you plan to extend the scale of the brewery and distribution, or are you happy to stay as a close knit company creating quality goods?

We installed a double fermentation vessel in December and our first brew went in this week! This big boy will increase our productions by 40% at first and by 80% by the end of the year. We want to expand so we can brew more interesting beers and please everyone. I don’t think the director would like to have a fast-expanding brewery like Camden town or Fourpure though. You will always loose the quality of the beer when you expand that big.

How is the new venue doing? Has this increased popularity of the brand?

The venue is doing pretty well! Lots of people are coming and they seems to be happy with the pub. I don’t know if it increased the popularity that much because the people in the area don’t really  know a lot about craft beer. However the Hammerton products are the most popular in the pub so I suppose the venue increased our popularity in the craft beer scene for sure! I am seeing a lot of posts on UKCBF (UK Craft Beer Forum) about our pub, probably because it’s one of the only craft beer pub in the area as the others are either in Crouch End of Angel.

I felt it was time to let Eddie get back to work, the man had beers to sell! Although before leaving I took it upon myself to sample a few more of the freshly brewed beers the team concocted. I suppose it would be rude not to.

Hammerton brewery opens it doors to the public on last weekend of every month, giving the public the chance to taste some of their new products such as ‘Giant Isopod’, an Imperial Vanilla Oatmeal Stout and the new juicy XPA ‘Panama Creature’. Get yourself down there for a freshly brewed bevy!