Online Vs Reality: The Illusion of E-Commerce

With the digital age booming ahead it is not a surprise that online shopping is at its peak. Shopping from home is much easier and more convenient than dragging yourself into the city centre. Whether it is rainy or sunny, the comfort of your own home will always be the winner.

However, it is not all full of ease and cosiness from being able to shop from your living room. Many online shopping websites have no physical stores, so if anything goes wrong there is no way you can go to the shop and hash it out face-to-face.

Most of the time you have to rely on communicating over emails, social media and sometimes even WhatsApp.

This is still one of the downfalls of e-commerce; the fact that if anything goes wrong, you have to go through a long process of trying to sort it out without even seeing the face of the person you are communicating with.

We may be in the 21st century where most people converse over the phone or through texting but still, most human beings would rather sort a problem out face-to-face than over the phone because you are more sure it will get resolved. You cannot walk away from someone but you can push an email aside.

The major issue that online shopping faces coincidentally and the one thing retail stores push to achieve its best in is customer service. People who work in this sector may think because you cannot see them that they can slack, however, it is these exact people who bring the company down.

The study ‘Two-Way Street‘, from platform iAdvize, investigated consumer expectations of customer service on live messaging and over the phone while shopping online.

Customers are more likely to abandon their shopping cart if the customer service fails to produce responses quickly and full of quality.

Eight out of ten of those shoppers surveyed by iAdvize said that receiving a personal service was important to them. The firm admits that it highlights “the need for human interaction with online advisors that can tailor the customer’s shopping experience”.

Furthermore, “good quality answers” was listed by 95 per cent of the shoppers as the most important aspect when shopping online.

“As e-commerce growth continues at a rapid rate, we are witnessing more demand than ever before for retailers to instantly engage with the customer wherever and whenever they need information,” commented Julien Hervouët, CEO at iAdvize.

Artefact looked into some case studies regarding bad customer service and found that it is still very common for online companies to neglect it.

“I was being charged to return items that this company incorrectly sent to me – not what I ordered, at all, but I was still asked to pay the return fee. I argued that I didn’t think that was legal under the Sale of Goods Act (as the item I actually received was due to their error),” said Katherine Cara, 22-year-old.

“They sent me an email back saying that it was company policy but as a gesture of goodwill they wouldn’t ask me to pay postage. I replied saying I didn’t think they could legally charge me anyway, given that it was their fault but they never replied to that bit.”

“My order was ‘rounded up’ to a whole pound. I ordered a few things and it came to something like £32.97 and they charged me £33. Threepence isn’t a lot to quibble over but imagine if they did that to everyone. They would make a fortune!” said Chloe Callaghan, 22.

When she contacted them they said something along the lines of ‘how strange’ and they denied any knowledge of how this happened and then charged her the correct total. “Could have been a computer error but it seems bizarre.” 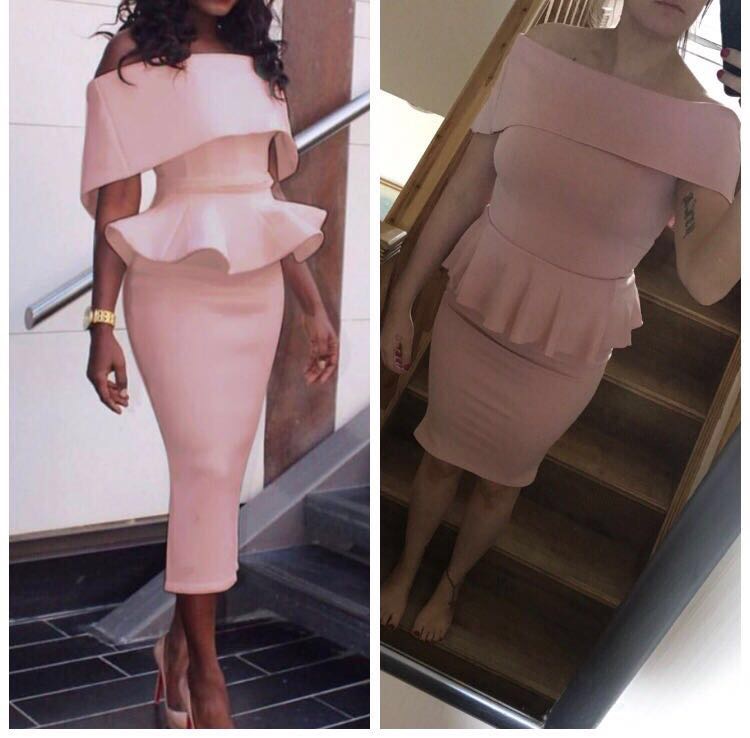 The dress arrived not looking anything like its picture

Lowri Phillips, 24, stated that the same company never refunds her the full amount when she sends items back, “I’ve had to get back onto them four times now over four different orders.”

Most people mentioned one company in particular who lacked good customer service but there was also various companies, big and small, that failed to deliver their products with the best quality, therefore, resulting in false advertisement and very unhappy customers.

Kerrie Carty, 27, ordered a dress from an online website she saw advertised on Facebook. When it eventually arrived it was not at all what the picture portrayed. “The material was that cheap ‘stick to you’ type and the stitching was terrible, all the thread was hanging off.”

She also had another incident like this but with a different company. “It feels all twisted around the arms when it’s on and I’d probably need two or three sizes up from my actual size. The slit is in a different place from the advertised photo, doesn’t zip up and where it is ruffled at the front of you stand on the side it makes you look pregnant!” 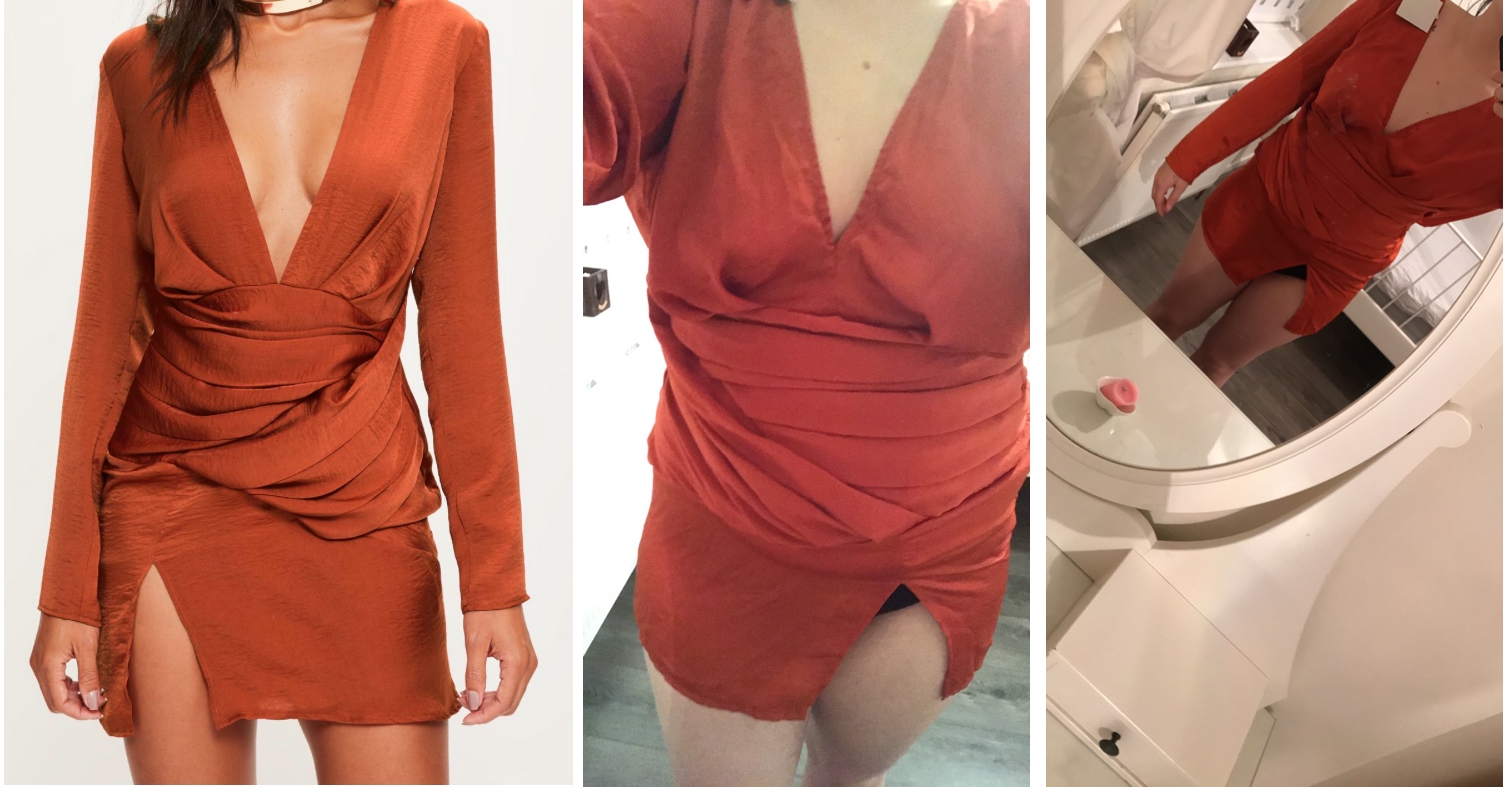 What you see is NOT what you get

Although she found it amusing in the end, it should not have been like this in the first place. It should be ‘what you see is what you get’ but unfortunately what we are seeing is through a computer screen and therefore the image can be distorted to make it look like a perfect fit.

However, according to gurufocus.com, the market for online shopping is growing at a remarkable rate. Approximately 87 per cent of UK consumers have bought at least one product online in the last twelve months, and the United Kingdom is second only to Norway for making e-commerce purchases in Europe.

In the coming 12 months, the market potential for British e-commerce is expected to improve dramatically. According to data from the Office for National Statistics, online sales increased by 21.3 per cent during 2016 and reached 30 per cent by 2017’s second half. 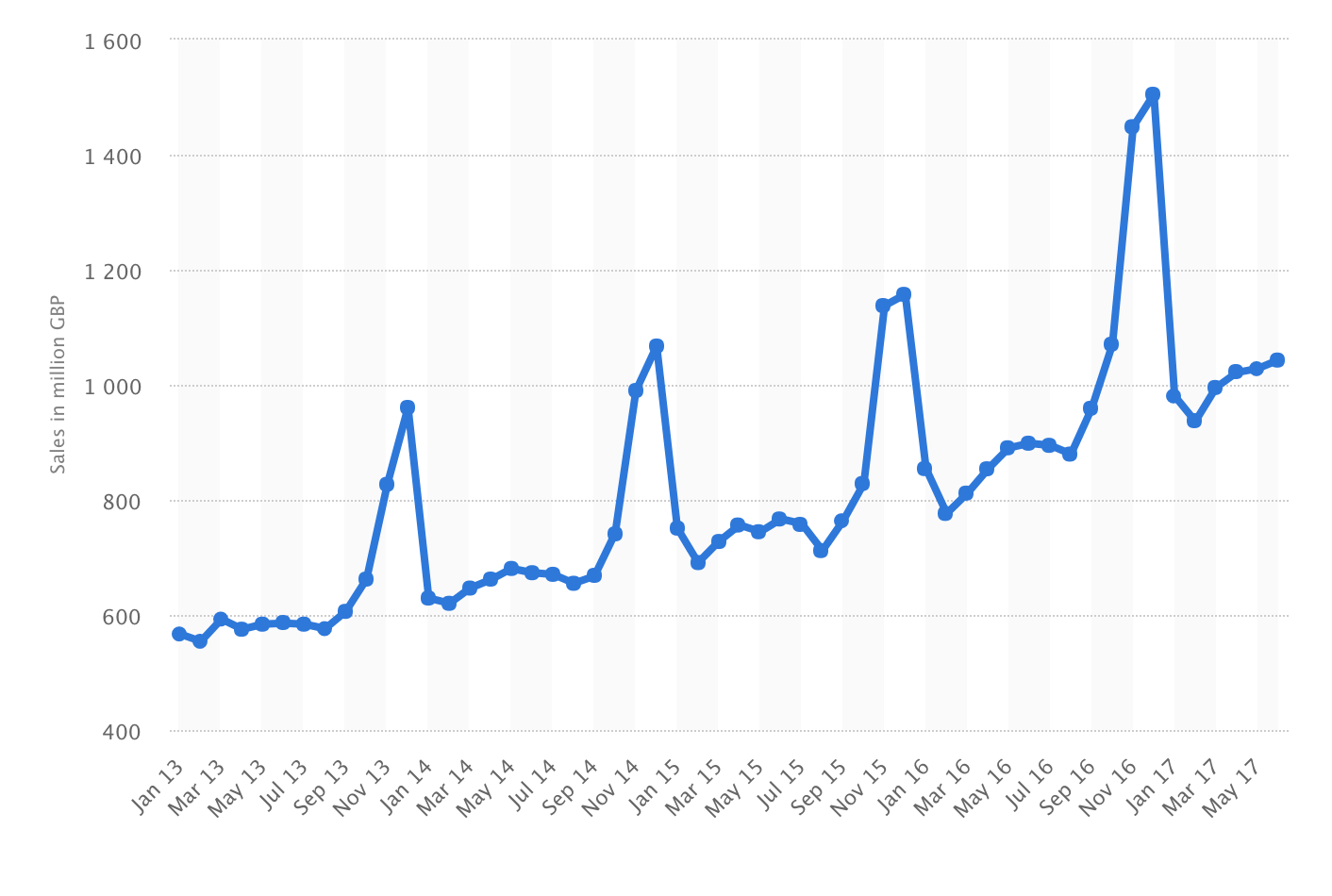 Statista.com has recorded the value of internet retail sales monthly in the UK from January 2013 to June 2017 (in million GBP).

Demand for online shopping is not slowing down anytime soon. The value of internet retail sales has steadily increased with peaks during the winter season, reflecting sales increase during the holidays. In 2018, the e-commerce sales are expected to reach a share of 18 per cent of all retail sales in the UK.

With that being said, e-commerce certainly has its advantages and disadvantages. Even with the digital age advancing slowly but surely, maybe its time to realise that not everything you see on the internet is what it seems. It is time to stop being lazy and not let technology take over our lives.

Get up and go, it is much more beneficial to both lifestyle and health to pry ourselves away from the gadgets that rule our life. If we choose to take a step back from technology we might be able to actually see whats in front of us – reality.

By Lauren Gordon
1 Mins read
In this podcast, we talk to two journalists about getting into industry after university and their experiences so far.
21st-century trends

Fashion Retail: Is it really sustainable?

By Charlotte Griffin
4 Mins read
We investigate the inner workings of the fashion retail industry and the impact it’s having on the climate crisis.