We need to talk about food

We tell ourselves we need to restrict our diets, but we need to talk about food for the wonderful thing it is. Food can do wondrous things: it can bring people together, it allows us to take part in other cultures, it is comforting, and above all, we need it to survive.

Over the last few years, diets have become increasingly popular. Brands such as Weight Watchers, SlimFast and the Atkins diet have become some of the most well-known diets out there. In the last few years with the growing use of social media, we have seen things such as wellness, juice cleanses and ‘’clean’’ eating mask themselves as a ‘lifestyle’, but in reality, they are still diets, they are still a way of restricting ourselves.

To put it plainly, these diets all imply that there is a wrong way to eat. In particular, “clean” eating bothers me; the word ‘’clean’’ implies that if you are not eating “clean”, you are eating “dirty”. When we diet or restrict the food we eat or the amount we eat, we deny ourselves the pleasure of eating, and we wait for “cheat days” and feel guilty when we eat food that is “bad”.

They way these diets are set out are strikingly similar to the way some people with eating disorders act and behave when struggling. Labelling certain foods as bad and feeling guilty when eaten. 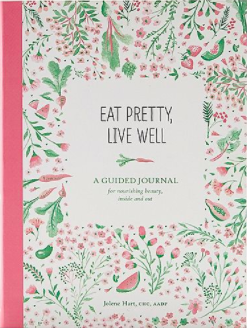 Meticulously counting calorie intake and taking note of what you have eaten during the day are some of the things that these diets promote. These diets all attach beauty and happiness to food and diet, the ‘healthier’ you are the more beautiful you are and in turn, the happier you are.

An example of this is the book Eat Pretty, Live Well: A Guided Journal for Nourishing Beauty, Inside And Out  by Jolene Hart. The book asks the reader to track what they are eating, how that made them feel, the time they ate and the setting they ate in. None of this is healthy – it breeds a toxic relationship with food.

It asks the reader to precisely write about the food they consumed throughout the day and similarly using the word ‘pretty’ and talking about beauty in association to the food that you’ve consumed suggests that there is an ‘ugly’ way to eat food. The only way to talk about food is a positive one.

No food is bad, no food is better than another. Food is food, and you should eat what makes you happy. We shouldn’t be promoting restrictive diets but instead, be encouraging each other to have happy and healthy relationships not only with food but ourselves.

Ruby Tandor who starred in the fourth series of The Great British Bake Off recently published a book titled Eat Up, which talks about food, fad diets, mental health and teaches you how to fall back in love with food; it is a book for everyone.

British Journalist Reni Eddo-Lodge said of the book: “A wonderful read, whatever you eat. Loved this book for helping me rediscover joy in food when ‘new year, new me’ diet rhetoric was getting unbearable.” Nigella Lawson tweeted Tandor earlier in the year congratulating her on the publishing of the book.

Ruby openly talks about her struggles with food and uses her social media accounts to talk about food and mental health positively. She recently posted to Instagram talking about the problems that come with eating disorders, recovering from one and complicated relationships with food.

With more than 100,000 followers on Twitter and almost 50,000 on Instagram, she is sending out a positive message to some many people who probably don’t even realise they need it.

YouTube and Instagram have allowed people to share their eating habits with others quickly, and this has allowed this new type of diet sky rocket into the mainstream and to become a part of peoples’ daily routine. The link between diets and social media have become more obvious and increasingly more concerning.

It has allowed people who already feel uncomfortable about food to look at these people and worry about their diets or people who never seemed bothered about their diets become concerned that the way they are eating is ‘wrong’ or unhealthy. It is undeniable that social media affects the way that we see ourselves.

According to research by Girl Guiding, a charity that aims to give “girls across the UK to the space and opportunities they need to thrive, grow and give back to their communities,” They say 35 per cent of girls aged 11-21 say they post on social media every day, 45 per cent say their phone is the most important thing they own, and 35 per cent said their biggest worry online was comparing themselves to others online.

These numbers are alarming as girls as young as 11 are worrying about the way that they are perceived by others online. The way we use social media is unhealthy we are seeking validation from people and from likes. Our diets are now connected to how we look and how others think we look.

Social media is where we spend most of our time online. According to global web index, it is at 33 per cent compared to 16 per cent spent on online TV and streaming. Comparing this increase of social media usage to the rise in a number of people accessing mental health services which have been rising each year, there is a visible pattern.

Below is a graph that shows a 64 per cent increase in referrals to specialist child and adolescent mental health services (CAMHS) between 2012/13 and 2014/15.

There has been a rise in young adults reporting mental health issues over a more extended period; between 1993 and 2014 there has been a 35 per cent increase.

Public Health England’s graphic shows there is a clear problem with young people, eating disorder and how they are both connected to social media: 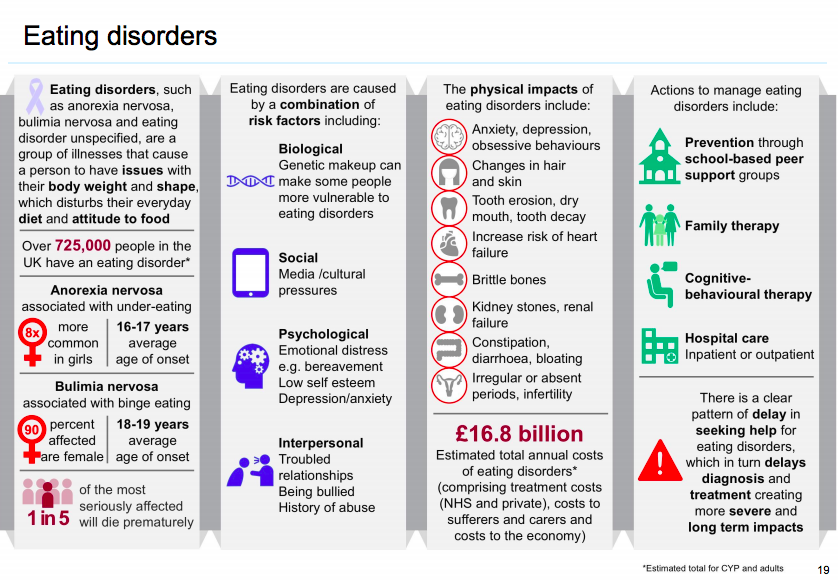 Another issue is advertising and the way that bodies are portrayed in advertising, take for example Protein Worlds 2015 advert that was put up around different cities in the world. The advert featured a model in a bikini and asked the reader the question ‘Are you beach body ready?’.

People slammed the advert as ‘body shaming’, as it implied that if you don’t look like these women, your body is not ready to go to the beach in a bikini.

A petition on Change.org gained over 70,000 signatures. The Advertising Standard Authority received 378 complaints where people complained about some issues including that an advert that was promoting a slimming product was socially irresponsible.

While the ASA said the advert was ‘inoffensive’ and that the advert “prompted readers to think about whether they were in the shape they wanted to be for the summer and we did not consider that the accompanying image implied that a different body shape to that shown was not good enough or was inferior.”

Rebecca Field, a spokeswoman for the eating disorders charity Beat, gave her reaction to Huffington Post: “While we recognise advertising and the media cannot cause eating disorders – they are much more complex than that – we are aware how toxic images can be to an individual. Everybody is different, and Beat will continue to campaign to see a wide variety of shapes and sizes represented in the media.”

When The Mayor of London Sadiq Khan was elected, he announced he would move to ban body shaming adverts on the underground. In a statement, the mayor said: “As the father of two teenage girls, I am extremely concerned about this kind of advertising which can demean people, particularly women, and make them ashamed of their bodies. It is high time it came to an end.”

This is the kind of action we need to take to tackle the conversation that surrounds food and our bodies. Food is something that our body needs to survive. We should not be restricting ourselves to certain foods and specific diets, and we should be enjoying a balanced one that makes us happy.

Carbs are not the enemy, sugar is not the devil, and our body needs both to survive. The way we are talking about food and diet is becoming increasingly unhealthy and toxic. We concentrate more on how to be “healthy” and “fit”, rather than focusing on our happiness and our mental health. Since children and young people use social media and the internet so regularly now, we need to be aware of not only the content we put online, but the content that they see and have access to.

Children and young adults are the most vulnerable and susceptible to these so-called ‘lifestyles’, and we need to ensure that they do not feel pressured to look perfect and that they need to restrict their diet. But not just for them, but for everyone who struggles with food and with their diet.

Featured Image by AJEL via Pixabay