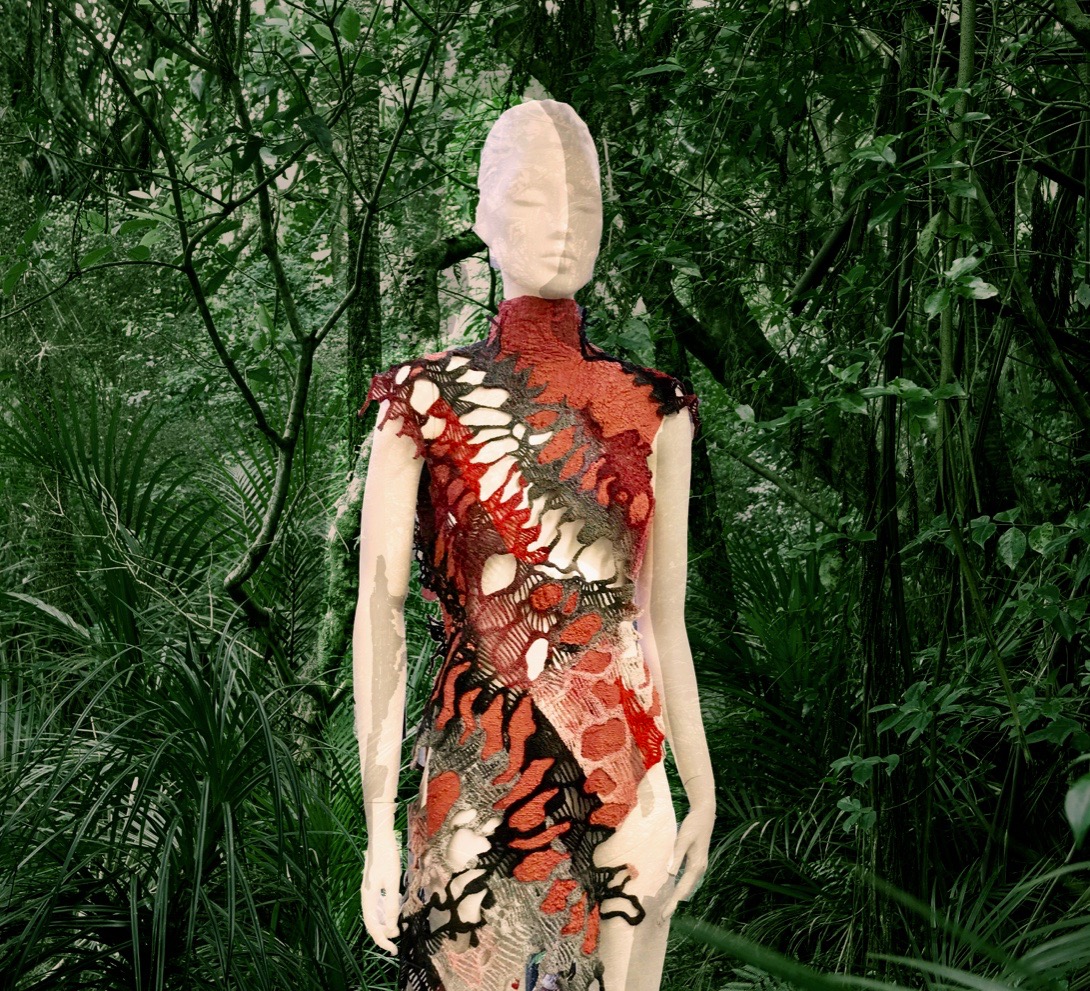 Completely bio-degradable fabrics, a bio-garment that filters the air from pollutants, leather alternatives from pineapple fibres and a bag to fight water scarcity.

Some designers are already trying to take a step in the right direction, contrary to the rest of the fashion industry which is still one of the main industrial polluters, second to oil.

Despite this, climate change researchers, economic experts and designers themselves agree that in order to greenwash the image of this industry and counteract climate change, business people, creatives and consumers need to redefine their job description.

In June 2018, the Environmental Audit Committee, part of the House of Commons that monitors the way the government is dealing with environmental protection and sustainability, published a Twitter post quoting Labour MP Mary Creagh: “Fashion shouldn’t cost the earth. But the way we design, make and discard clothes has a huge environmental impact.”

The fashion industry still demands both high human and environmental costs and while the global production of clothes as well as human population itself are constantly increasing, people are buying more and more, yet, keep their clothes for a shorter amount of time.

“Fashion has always been more about aesthetics rather than functionality, ethics or sustainability,” says Piero D’Angelo, fashion design student at the Royal College of Art and creator of a bio-fabric which filters pollutants from the air. “But then this university project came along which should challenge me and my colleagues to integrate biology into fashion and that’s when I started to ask myself a whole different range of questions. One of them eventually was ‘What if there was a bio-garment to filter our air?’ This would help fight climate change as well as improve people’s health.”

Air pollution is one of the main climate change factors caused by industrial and household emissions. It damages not only the environment and bio-diversity but also harms the human body. 91% of the world’s population live in places exceeding WHO guideline limits; one-in-nine deaths is caused by air pollution, 4.2 million deaths are due to the exposure to outdoor air pollution and 3.8 million are caused by the exposure to household smoke form dirty stoves and fuels.

“At this stage where resources are limited and the fashion industry is already damaging the environment, business and design need to work hand in hand and learn from each other because it’s not getting better.“

Even though this is a widespread problem, it is concentrated in big and densely-populated cities. London reached its air pollution limits on January 30 2018. This means that for the past nine months, every person living in London has been breathing air which fail to meet European Union quality rules. This was not the first time the British government did not comply with regulations. In May, Britain along with five other countries (Germany, France, Italy, Hungary and Romania) was taken to the European Commission for repeatedly breaching legally-binding air pollution regulations.

Piero D’Angelo addressed this problem and decided to create a fabric to filter the air around us and reduce harmful pollutants. The main component of his fabric are lichens. He chose this particular bio-organism due to their specialised characteristics such as absorbing pollutants from the air and metabolising them into less or non-toxic compounds. “And then I thought, what if people could wear them and clean our air.”

Eventually, Piero’s project lead to a collaboration with Japanese scientists from the Ikeuchi Lab of the University of Tokyo who were working on creating synthetic neurones. “When I first met with the scientists, I had been researching lichens and their characteristics for quite some time. So, eventually my idea was to combine the features of neurones and lichens. The role of the neurone would be to detect stress hormones which are released by the human body when exposed to pollutants and which would then transmit signals to the lichens to clean the air even more efficiently.” So far, Piero’s neuro-lichens-lace is still theoretical but he will continue to cooperate with the scientists to make his lace reality someday.

The idea of wearing a garment that is not only about its aesthetics but is sustainable, even a fabric that interacts and improves one’s well-being is also a concept, New York-based fashion designer Suzanne Lee, is imagining.

Lee is a senior research fellow at Central Saint Martins College of Art and Design, Director of The BioCouture Research Project, and Chief Creative Officer at Modern Meadow in New York. She has already created a fabric grown from bacterial-cellulose which is 100% bio-degradable. “You could literally eat your clothes,” Lee tells the insights platform LS:Nglobal. And yet, she thinks you could go even further and design something like a second skin that is able to respond to the body’s needs such as Piero’s theoretical idea of the neuro-lichens-lace.

“The purpose of business is increasingly recognised as needing to go far beyond the narrow definition of maximising returns to shareholders.“

When it comes to future expectations on businesses of any industry, having an integrated approach by combining textile fabric design, science and fashion design, and at the same time neither harm bio diversity nor the climate is actually quite forward thinking.

WWF advocacy Bernadette Fischler explains about the 2018 IPPC 1.5 Degrees report: “At the moment we are addressing climate change, bio-diversity and the economy separately with three action plans, three budgets, with three everything. That’s not efficient. But if you have an integrated approach you are able to better manage trade-offs between, for example, bio-diversity and climate change. Trade-offs which will always be there. It is foolish to think that if you just deal with climate change really well, it will also stop nature loss and we have a sustainable economy.”

As an example she mentioned a community that was living off a mango forest but the mango forest had to be taken away because they needed to build a concrete sea wall in order to protect them from rising sea levels, a consequence of climate change, but then the entire community had to go somewhere else and build another mango forest because they had no food anymore.

“The purpose of business is increasingly recognised as needing to go far beyond the narrow definition of maximising returns to shareholders. A reframing of the imperative to operate as a responsible business will involve both understanding and measuring a wider set of concerns that reflect broader reflection of companies’ impacts on society and the environment,” according to the climate change and resource scarcity trend-research team of the multinational professional services network PwC.

Some companies, such as Piñatex, who design leather alternatives out of pineapple fibres, a by-product of existing agriculture, were inspired by the Cradle to Cradle Certified Product Standard which examines the qualities of a product in six categories: material health, material reutilisation, renewable energy and carbon management, water stewardship, and social fairness.

“You need to know the materials you’re using. There are no more excuses that you have no clue what you are dealing with.“

Almost all of the Cradle to Cradle categories imply that natural resources need to be saved and managed more efficiently because they are scarce. One of these resources is water. A study by the International Water Management Institute estimates that by 2025, 25% of the world population or 33% of the population in developing countries will be affected by severe water scarcity.

The 2018 United Nations World Water Report also shows that “at present, an estimated 3.6 billion people (nearly half the global population) live in areas that are potentially water-scarce at least one month per year, and this population could increase to some 4.8–5.7 billion by 2050.”

An exhibition called Future Bags organised at the Museum of Bags and Purses, set the task of designing “the bag of the future”, more specifically 2050, to a group of design students from the Royal Academy of Art in The Hague. They had to consider what materials will be available in 2050 and the needs and challenges society will be facing. In other words, they had to get away from the fashion industry’s “narrow definition“ (PwC) of designing aesthetically-appealing or economically-profitable clothes.

One group addressed the issue of water scarcity and presented the “Bag as a Home” as a solution. The bag can provide one’s daily drinking water supply by filtering human urine, which is 90% water – as the human body produces about 2000ml (3.5 pints) per day this amount would be sufficient to survive.

Industries of any sector need to start rethinking the way they do business and manufacture their products from the ground up. “You need to know the materials you’re using. There are no more excuses that you have no clue what you are dealing with. And it doesn’t matter what your role in the fashion industry is, whether your are a marketing or sales person or creative,” says Katarina Rimarcikova, Senior Lecturer in Fashion, Design, Media and Management at London College of Fashion.

“At this stage where resources are limited and the fashion industry is already damaging the environment, business and design need to work hand in hand and learn from each other because it’s not getting better. We simply have to figure out how we can do it better together.”