In a newfound passion for the interesting and exciting world of modern-day witchcraft, I took part in a spell casting for ‘disposing of serious psychic garbage’ as inspired by the book Light Magic for Dark Times by Lisa Marie Basile, founder of the Luna Luna magazine.

Safe to say it worked. Going into this I had no idea what to expect from the ritual.

I met Willow, a self-professed witch practicing light magic, at a Fossil and Crystal shop in south-London to get the crystal needed for the ritual we were going to do.

The tightly packed shop had walls crammed with all forms of crystals and fossils imaginable. Giant amethyst was displayed in glass cases alongside necklaces with crystals attached to lines of cork boards on the walls.

A friendly expert in crystals and fossils greeted us; after speaking to the owner of the shop for over an hour, his incredible ability to read people and their auras was baffling. He read me for filth about my current life and we had a conversation about the crystals I was looking for and their purposes.

The shop-owner introduced himself as Kevin, jokingly calling himself ‘Uncle Kev’ later in the conversation. I left the crystal store with Red Jasper, Apache Tears Obsidian and Tourmaline. Along with the Rose Quartz for the ritual.

Having never been involved with anything like this before, it felt best to just dive head-first into it. I went in with my mind as open as possible, because it isn’t just for fun, it is a way of life and is incredibly intricate and fascinating. At the end of the day, this is someone’s spiritual beliefs, and I’m not one to question them. 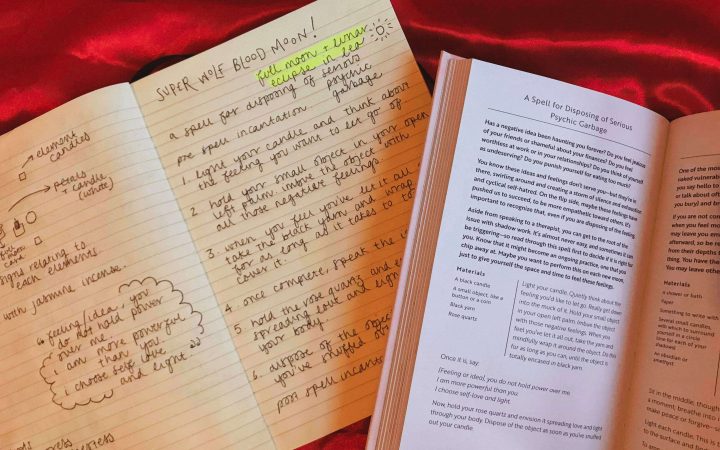 The night of the ritual was a super wolf blood moon which was in the house of Cancer. In the centre of the room was a blanket on the floor with four coloured candles, each representing the four elements. We sat opposite each other, candles lit and lights off, and before the ritual began Willow cast a protective circle in the room. Fleetwood Mac played softly in the background in the darkened, sparsely-lit room, setting the scene for the casting.


We invoked the power of the four elements to begin the spell casting in Latin. “A luna a undas” means ‘from the moon to the waves’. Then we called upon the power of the ‘coven’ by saying “coniunctis viribus” aloud, means ‘joining forces / collective power’. We each had a black candle in front of us and used the corresponding element candle of our zodiac sign to light it. I used the red candle of fire because my sun sign is Aries. Whilst Willow used the blue candle symbolising the element of water as her sun sign is Pisces.

Eyes closed, I held the small object that the spell requires, ours was a two pence coin, we lit the candles, imagining all the negative thoughts and feelings leaving our bodies. It was important to focus on the feelings going into the object and filling it up. Willow spoke softly over the music: “Think of the negative thoughts and feelings as a black liquid running down your arm and into the coin,” this helped give an image to thoughts going into the coin. 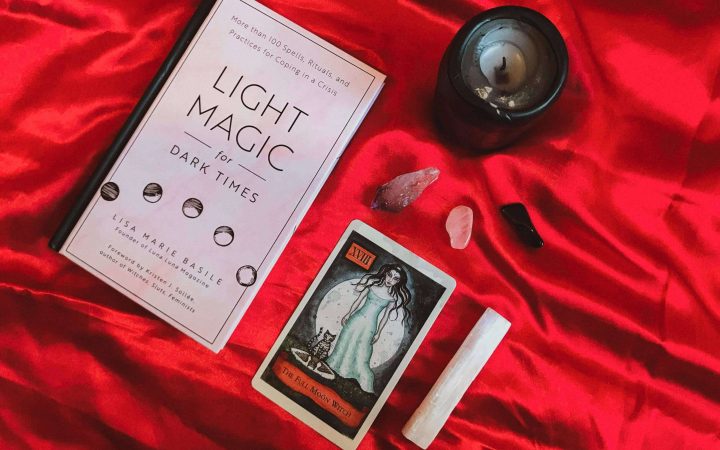 Inside the circle, Willow had a small bottle of oil, which she offered for the coin. The oil was a ‘spell oil’ and is made from scents and herbs that relate to the moon, she had personally charged the oil with the full moon. Taking a small drop of the oil I rubbed it in circles on the two faces of the coin. Still filling the coin with all my negative thoughts and feelings that I wanted to be rid of.

She brought the black yarn and tape into the circle and said: “once you feel you have filled your object with the negative feelings wrap it in this yarn or tape.” With my coin being too slick from the oil I used previously, I opted for covering it in tape. It felt like a true seal had formed over the feelings. We placed our objects on a tarot card in the centre of the circle until the ritual was complete.

The silence was broken again as Willow instructed me on what we would do next. Holding a Rose Quartz in the right hand we read the incantation: “Feelings you hold no power over me. I am more powerful than you. I choose self-love and I choose light. Dona nobis pacem,” which means ‘give us peace’.

Whilst saying this we were supposed to imagine our body filling with positive energy and self-love. Fully immersed in the experience at this point, I kept my eyes closed listening to the music playing in the background. Fleetwood Mac’s Rhiannon guided the energy through my body, swaying with the beat in a meditative state. Feeling positive energy flow through me with the waves of the sound.

As I snuffed out the black candle in front of me, Willow instructed me to pass my object through smoke to cleanse it before disposing of it and my negative energies. After thanking the elements; the circle was closed. At the end of the spell casting, there was a sense of weightlessness in my body. The positive energy overcoming my thoughts and feelings. Any negatives thoughts and feelings I had focused on during the ritual had long gone. 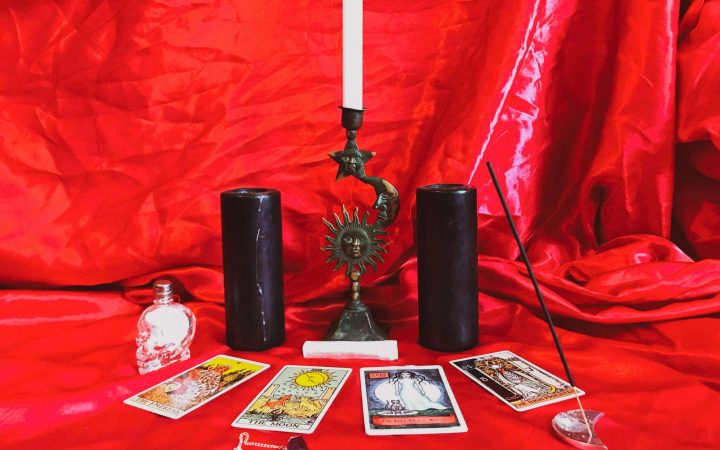 We then did a brief tarot and pendulum reading session. These actions in themselves are enlightening and mesmerising. Willow held the small Amethyst pendulum, found in the small crystal and fossil shop. once she had spotted it on that day, she was unable to put it down and was insistent on purchasing the item.

The concept behind using a pendulum for divination is quite simple, but it isn’t for everyone. Willow prefers practicing divination in this method, where personally I have grown to prefer reading tarot cards. At the end of the day, both are all about the intent and questions you ask. The pendulum works by holding it between the first two fingers, with the small bead facing towards you.

Readings are simple, the pendulum will have its ‘yes’ and ‘no’, this can be found by practicing asking it questions. We took turns in asking the pendulum questions, getting either strong ‘yes’ or ‘no’ answers. The pendulum would also move on a slight angle as it gave the answer, suggesting that the question asked could be a yes or no but there would be other elements of life at play. Just like tarot, it is all in the interpretation of the answer given to you.

There is no recording of when the pendulum was first used as a divination tool. The practice has been around for many thousands of years. My first experience with it was when my step-mother was pregnant, the classic old wives’ tale of holding a needle on some thread above the belly to indicate whether the baby is a boy or a girl. 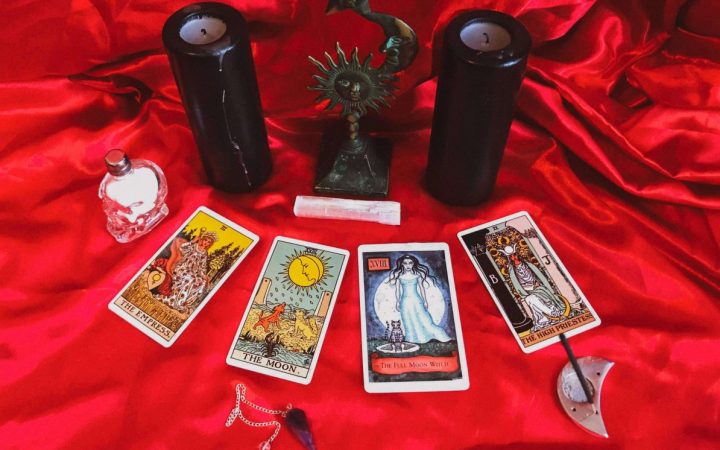 The pendulum has been used for many different reasons throughout history, whether it was spiritual or practical. King Solomon used a pendulum to find water during a visit to Queen of Sheba and in the Vietnam War marines used pendulums to ferret out underground tunnels and land mines.

Just like most practices of divination and witchcraft there is a colourful history to it just waiting to be discovered by those in search of answers or help.

In the time after my spell casting, it was unclear as to what I would feel in regards to what I focused on. Although at times when I was feeling the ‘psychic garbage’ I had disposed of came creeping back into my mind, all I had to do was remember the ritual and what I wanted to achieve from it. Pushing away any thoughts of negativity it didn’t want to continue to consume my mind and focusing on conducting myself and my thoughts in a more positive light.

Safe to say I will be continuing in the practice of using crystals and spells to help better myself and those around me.