As the New England Patriots take home their sixth Super Bowl win, the NFL(National Football League) prepares itself for a new season. American football is the United States’ national sport, as football is to the UK.

The NFL Super Bowl is one of the most-watched televised events in America, with around 113 million viewers for the 2018 final. However, the sport has slowly gained popularity abroad, especially in the UK, with the interest seemingly only increasing.

The owner of NFL in London, Wade McElwain, told us that “the sport as a whole is great, although infighting and concussion lawsuits are having a big effect on the game.” NFL in London is dedicated entirely to the NFL, providing news and more, while also setting up their own events every week during the NFL season for UK fans to get together in order to enjoy the games.

Closer to home he says that “while the NFL UK tries to put on the best experience, they do so from a very British point of view, and many North Americans feel that the events are lacking compared to home.” 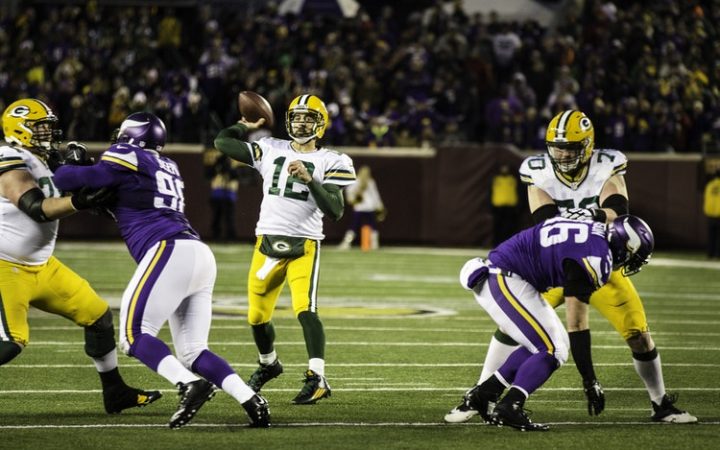 Aaron Rodgers leading the Packers to victory against the Vikings [Unsplash:Tim Mielke]

Wade believes that the clear lack of a late night atmosphere in London really hinders the experience: “London’s lack of ‘late night’ energy also means that many events simply die because nothing is open.”

Artefact also spoke to Chris Goodman and Lee Whittington from All32.co.uk, a blog written by a group of NFL fans. From his own personal experiences while attending events, Chris said: “It’s been an incredible ride, with many memorable days, the games are a unique experience, fans in America visiting have often described them as being as close to a Super Bowl as the Super Bowl as they offer the unique fact there is no real home team.”

This is in contrast to Wade, who thought American fans felt the events were lacking, although, Chris focuses more on the game aspects themselves.

Lee states that he has been to all four of the Miami Dolphins games that have been played in the UK, as well as a few others, he also travels to Miami each season to watch a game. He describes the atmosphere of these events as a contrast to those in America: “The game-day atmosphere at the games is very different to the games I have attended in the states, as there are fans of every team and people with different knowledge levels.”

“They have a carnival type feel to them, everyone is out to have a good time, even for new fans to the NFL, I believe it’s a great day and a perfect welcoming to the sport. I have been with such fans who would now call American Football their favourite sport, this is the impact the day can have,” Chris adds.

“In terms of the NFL events they provide throughout the year, I can’t think of another sport or company which provides such a great service to its fans. They are unique, fun and well thought out, and in conjunction with Sky Sports, have been brilliant on many levels,” he says.

Chris attended an event which involved popular NFL writer, Peter King, describing this opportunity as an experience “many fans in the States simply don’t get.” He believes that the quality of such events show that they care about the UK audience, and that it “highlights how highly the NFL thinks about its UK market.”

Lee describes the events he has attended as superb: “I attended multiple events in London and one in Liverpool, where I travelled from Sussex as there was a Dolphins player, Jarvis Landry, speaking. I will attend as many as I can, as being able to hear players and coaches in the game give their opinions and answer questions is a great experience.” Some of these experiences are unique and have helped to grow the UK fanbase.

[pullquote align=”right”]“Struggles with Gamepass and less of a social and event focus means that many fans feel detracted and left out.”[/pullquote]

The NFL was first covered in the UK in 1982 by Channel Four, who saw the potential in broadcasting the sport when they launched and even spent $100,000 to air the Super Bowl. Channel Four originally only had the rights to air the highlights from one game a week, though the airing of the 1982 Super Bowl led to an increase in popularity during the mid-80s drawing in around four million viewers regularly, which was great for the time.

Over the years, other channels have also covered the NFL including the likes of ITV and ESPN UK; Channel Four’s coverage ended in 1997 but was picked up again in 2010. Their deal was improved in 2014, and saw them increase the number of fixtures shown to 21 games, 17 of which were regular season games with three International Series games and Super Bowl XLIX.

However, Channel Four lost the rights after failing to strike a deal for the 2015 season, leading to Sky Sports becoming the main provider for live NFL games in the UK. Sky Sports have since continued to be the main provider for NFL content and with interest at an all-time high, they have introduced multiple highlights shows and documentaries alongside the regular seasons.

This runs in parallel with the BBC, who also agreed on a deal to show weekly highlights as well as the Super Bowl live.

Sky Sports’ 2015 deal saw the total fixtures increase to 103, as well as complete coverage of the post-season and Super Bowl. That deal has increased over time to include more for fans, especially with the introduction of the NFL Game Pass.

The NFL Game Pass allows UK users to watch and replay all 256 season games for each season, as well as providing commentary through radio broadcasts and more for a price. Similar to streaming services out there, such as Netflix, Amazon Video and the WWE Network.

While the Game Pass has brought in new viewers and made the sport more successful, it hasn’t always been fully successful, as Wade explains: “the NFL has continued to grow here, but the league has not. Struggles with Gamepass and less of a social and event focus means that many fans feel detracted and left out.” 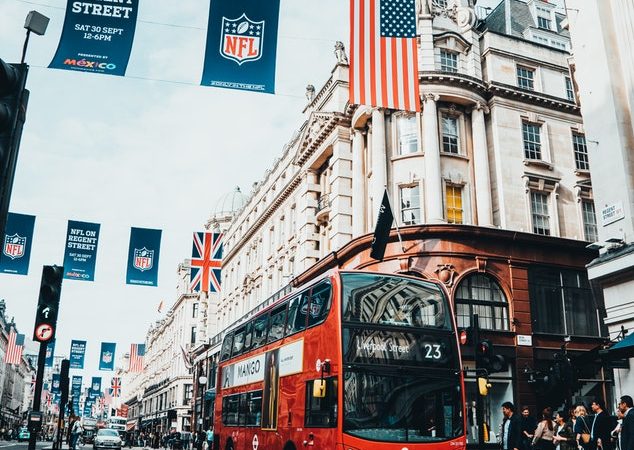 The UK’s interest in the NFL skyrocketed after the introduction of the NFL International Series, which saw games being played in London every year. Starting in 2007, the number of games being played slowly increased from one a year to around three or four. These weren’t the first games to be played in the UK, but they were very important in building the fan base in the UK.

Change is inevitable, especially in the realms of sport, where new technologies can enhance or improve the game. Take the much-debated VAR (Video Assistant Referees) in European football, whether it is seen as a good or bad thing, its introduction has and will continue to change the game by removing more occasion of human error and allowing referees to look back at certain events in the game. This is similar to reviews in American football, Rugby’s TMOs (Television Match Official) and Cricket’s DRS (Decision Review System) for example.

Chris agrees that the NFL climate has changed in the UK, believing that the sport has gained enough traction to the point where it can be considered a popular sport.

“The UK scene has changed drastically since the NFL started coming over. The NFL has gone from being a niche or having an underground, following to one of the most popular and well-followed sports in the UK, you just have to visit any traditional sporting event, such as a football or rugby game now to spot NFL merchandise, this alone shows the level of success it has had.”

Acknowledging his own bias, Lee explains his opinion on the sport in the UK and its influence on fans: “I don’t think the sport could be in a better place in the UK, it’s really impressive how it is growing, the rise of new fans and rise of amateur run podcasts, blogs, fan sites show not only the rise of support but knowledge the average fan in the UK has risen alongside its presence. I only see the NFL continue to grow in the UK, the fans are hungry for more.”

The introduction of a UK-based franchise team has been much discussed in recent years. Shahid Khan, the owner of the Jacksonville Jaguars, All Elite Wrestling and Fulham football club, has been touted to lead the charge to build a UK franchise. 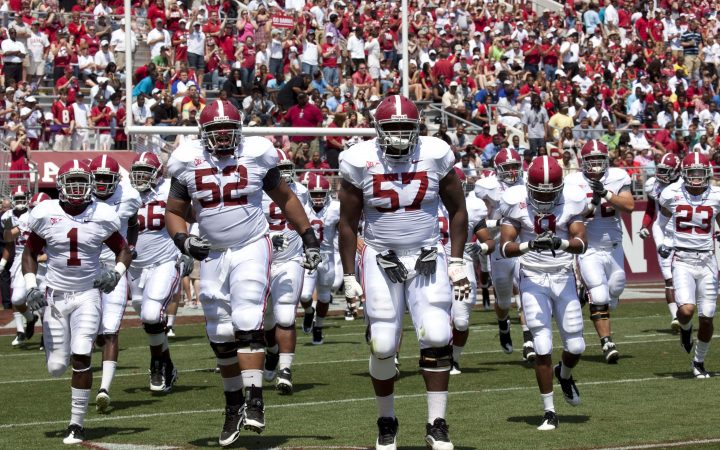 American Football has a huge following the the States [Pixabay]

Many suggested that the Jaguars themselves might be moving to London, rather than a new franchise team being built through expansion. However, after a deal broke down relating to the acquisition of London’s Wembley Stadium, talk of a new team has quietened.

“I believe the key is more games, not a team relocating here,” says Lee. This also looks the more likely option thus far as more and more games are being played every few years.

Wade also believes that a UK team will not happen, believing that the NFL needs to start from the bottom in order for a UK franchise to be successful, “There will never be an NFL team in London, and that’s good, because of the logistical mess involved in one. The NFL here needs to be proactive and mindful of growing the game from a grassroots level, and not just from themselves.”

Lee had a different opinion: “I like what the NFL is doing.” He says he would prefer the experience to be more akin to that of the American event, “A change I might make is not an improvement, but I would take away some of the extra things that are done here and make the game day experience more like that of a typical Sunday in the USA.”

NFL in London‘s Wade believes the international games should be more accessible to fans: “They could improve the NFL games here by getting many more fans involved. It is generally a one-sided affair with the NFL UK handling everything, and none of the fans, fan groups or sponsors involved. This means there is no incentive for others to get involved.”

He believes that quantity of games will not help the sport to grow internationally and that the games should move away from TV broadcasting and move onto an online streaming format, in order to draw in more fans, “expanding the games won’t help, but getting the TV broadcasts off of Sky and onto Amazon or Facebook would go a long way to accessibility.”

The expansion of the international games will only continue to grow, even outside of the UK, with this year introducing a fifth game to be played in Mexico. Chris believes that a necessary improvement could be to branch out to areas such as Ireland and Germany, as time goes on, this is looking much more promising, “all of these regions have huge NFL fanbases and the required infrastructure to host an NFL game.”